At first it seems the Doctor (Matthew Smith) is just putting the moves on Clara (Jenna-Louise Coleman), following male folk wisdom that if you want a girl to get closer to you, take her to a horror movie.

Or, in this case, the haunted Caliburn Mansion in 1974. 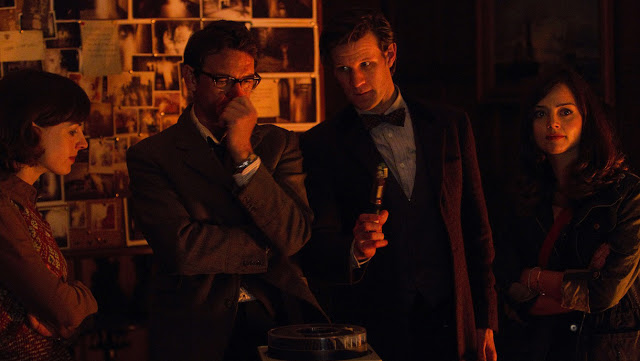 Claiming to be from military intelligence, the Doctor checks out the professor’s retro ghost-detecting equipment.

“You know, I do love a toggle switch,” he declares joyfully, wiggling the device. “Actually, I like the word, ‘toggle.’ Nice noun. Excellent verb.” 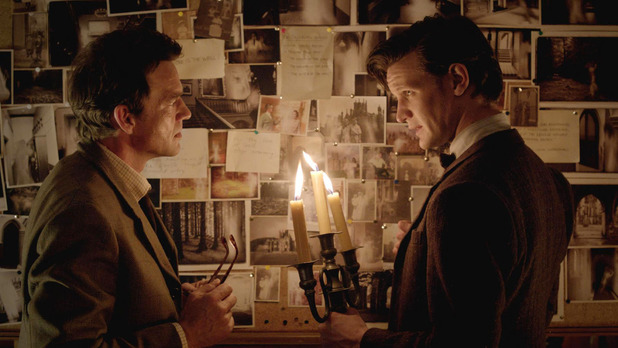 The two couples examine a bulletin board filled with photos of the “Witch of the Well,” a screaming ghost that looks like it was lifted from an Edvard Munch painting.

Intrigued, the Doctor suggests to Clara that the two of them sneak off and they enthusiastically go on a candlelit ghost hunt. They soon encounter all the hallmarks of a haunted house—mysterious banging, a feeling of being watched, an eerie cold spot. 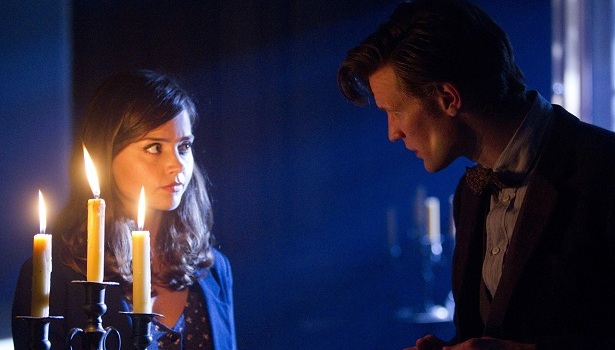 In a series of unexpected twists and a quick photo session through time, the Doctor discovers that this is not a ghost crying for help, but a space explorer named Hila Tukurian (Kemi-Bo Jacobs) trapped inside of a “pocket dimension,” being pursued by a hideous alien. The Doctor straps himself in to a tethered vest and arranges to use Emma’s psychic powers to guide him into a portal to rescue the wayward explorer. In the pocket dimension, the Doctor saves the explorer but finds himself trapped alone, being stalked by the alien. 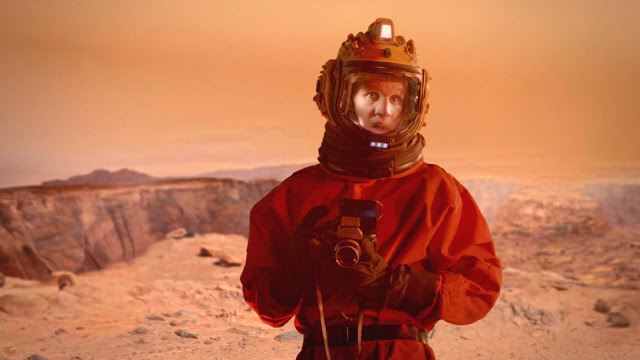 “I am the Doctor, and I am afraid,” he admits. Clara, after some dispute with the TARDIS, manages to swoop in and save him. The Doctor now has several spoiler filled revelations: the alien monster is actually a couple—one is haunting the 1974 house, the other is stuck in the pocket dimension.

The Doctor quotes a few lines from Cole Porter’s “Let’s Do It, Let’s Fall In Love,” to illustrate the point.

Hila Tukurian, the space explorer, he further reveals is actually the descendant of awkward lovers Professor Palmer and Miss Grayling. And most damning: the Doctor didn’t bring Clara to the setting just to sooth her goosebumps, he wanted to get a psychic read on her from Emma.

“You are the only mystery worth solving,” the  Doctor says, swooning a little, to Clara earlier in the episode.

Fans did a lot of shoulder shrugging over writer Neil Cross’s first episode this season, “The Rings of Akhaten,” but I think this makes up for that mediocre episode. Like the TARDIS itself, he was able to cram a large, unpredictable sci-fi mystery into the episode space.

It wasn’t terrifying, but it was suspenseful. It was a good old fashioned ghost story, but more important, a good episode of Doctor Who.