After some good-natured time stalking to shake down intel on his mysterious companion, Clara, the Doctor shows up at her house at the scheduled time agreed upon last episode.

He asks her where and what in time and space she’d like to check out.

The overwhelmed Clara suggests, “something awesome.”

That awesome place turns out to be the Rings of Akhaten. The Doctor has chosen the destination for the fantastic spectacle of a ceremony that occurs every thousand years.

Exiting the TARDIS, the pair wander around what looks like the set of a Star Wars knockoff—there is an eclectic group of rubber faced aliens wandering and haggling in a market. The Doctor and Clara try eating a blue jelly thing and encounter a butt ugly alien that barks like a dog. 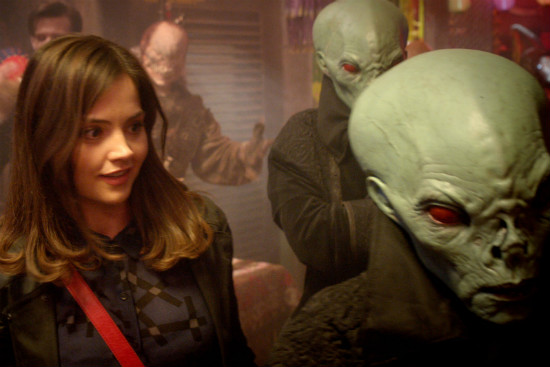 Splitting accidentally in the crowd, Clara encounters a frightened girl.

She follows her and tries to save her from pursuers, which include two of her elders and a trio of metal faced monsters that like to whisper in a creepy way. Clara finds out that her young friend is Merry, the Queen of Years, who has been drafted to sing a lullaby to an ancient god to keep him safely snoozing. The Doctor and Clara find a seat among the assembled aliens to listen to the singing. But something goes wrong. 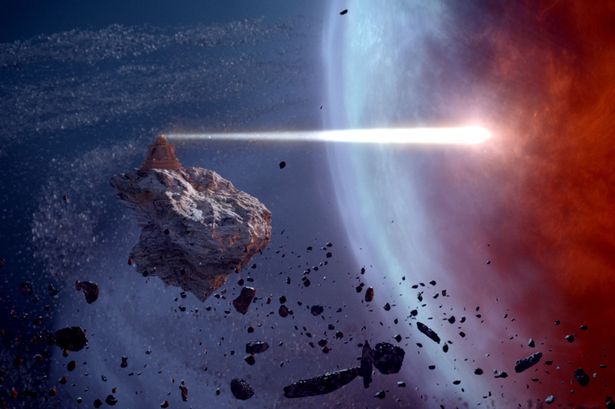 The Queen of Years is grabbed with some kind of psychic claw game mechanism and dragged to the old god’s temple, nestled on top of an asteroid. The Doctor and Clara pursue her on a space moped.

At the temple, The Doctor cracks the door using his sonic screwdriver, which I now have to level a criticism against. 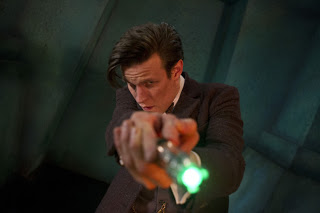 The sonic screwdriver used to be busted out once in awhile and used for what it is—an eccentric tool that came in handy in certain situations.

But lately, the Doctor has been wildly flailing it around in every spot of trouble he gets in—while riding on a motorcycle, while having an energy battle with bad guys, zapping this and that.

The screwdriver has become a magic wand instead of a piece of alien technology.

Anyway, inside the temple is a crusty green pointy-head alien under glass, a soul eater. The lullaby ends and the alien wakes up, hungry for Merry’s soul. He begins smacking on the glass with his webbed hand.

His creepy whispering bodyguards are back, too—Hellboy, that’s what those things remind me of, something from Hellboy. It turns out everyone has a bigger problem as the alien that was trapped behind the glass isn’t the soul eater, but a giant sun-sized alien that has now awoken. Clara zips the Queen of Years off of the temple planet while the Doctor prepares to give the sun god some soul to squeeze.

The Doctor gives an emotional speech about his long years traveling the universe and the memories it has created within. Well done, writer Neil Cross. 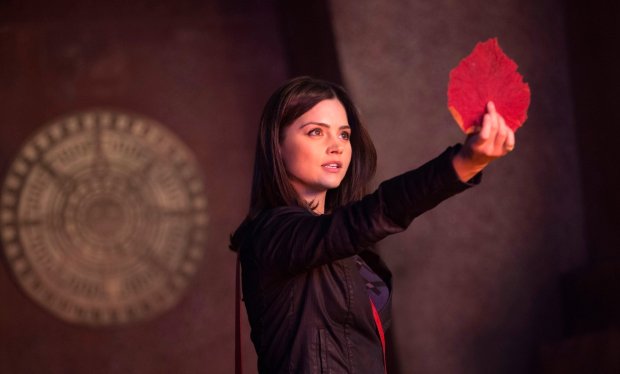 Clara returns to help the Doctor and offers her special maple leaf from her scrapbook. We find out from the Doctor’s snooping that the leaf is the cause of Clara’s parents meeting. The emotional speech continues and all of the aliens start singing in solidarity. The soul eating planet god can’t handle it and implodes.

The Doctor tells Clara that she reminds him of someone he used to know (which is herself, of course) but no one wants to hear that old line, so Clara exits the TARDIS and the Doctor once again goes hmmm.

In case you missed it, there were a couple noteworthy announcements about the Doctor Who 50th Anniversary special, which began filming over the last week.