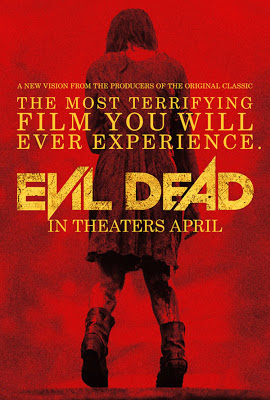 It’s pretty hard not to go into first time director Fede Alvarez’s Evil Dead without a bit of trepedition.

Now, the trio, who continue to work in mainstream Hollywood both in their own projects and also the occasional reunion, have reunited behind the scenes as producers for the inevitable remake.

But, somewhere along the line, the trio found a unique way to reimagine their “Cabin in the Woods” cult classic; honoring the original while developing a whole new set of characters.

Gone is Campbell’s beloved Ash Williams and Raimi’s over the top style (though Raimi’s old 1973 Oldsmobile Delta 88 is seen rotting next to the cabin).

Returning is the iconic cabin and the cause of all the trouble, the Necronomicon Ex-Mortis, a fleshbound tome that serves as a gateway to hell.

A prologue adds a bit to the mythology before introducing the new characters, childhood friends who reunite at the cabin to assist their friend Mia (a fantastic Jane Levy) to kick her heroin habit.  Joining them is her estranged brother, David (Fernandez).  It takes no time for someone to read the incantation and unleash the evil in the woods before everything goes to hell, literally.

Whereas Raimi played his original film for horror (and the sequel/remake Evil Dead II for laughs), Evil Dead 2013 is perhaps the most intense viewing experience I’ve ever had.  The palpable tension from the audience in the theatre was invigorating and the Alvarez garnishes the thrills with practical splatter effects to satisfy any gore geek.

Alvarez smartly sets the film in the present and the mere existence of the Oldsmobile infers that this does, in fact, take place thirty years later in that very cabin.  Story beats, which echo the original enough for some to cry remake, can easily be attributed to the Necronomicon itself.

The cast is solid throughout and Jane Levy’s possessed is reminiscent of Linda Blair’s performance in The Exorcist.  One solid critique is the film isn’t scary.  It’s intense and often uncomfortable, but there isn’t much there in actually frightening you.

But it is fun.

In this article:Evil Dead, Movie Review