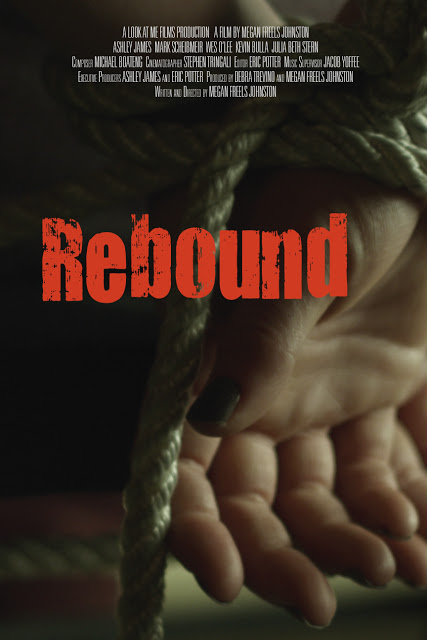 I recently had the opportunity to chat with producer Megan Freels Johnston, who is making her screenwriting/directorial debut with her film, Rebound, an old-school psychological horror/thriller.

The film brought together an enormously talented cast and crew and now, as the self-financed film goes into post production, Megan’s using Indiegogo to help pay for the final edit and sound mix.  We discussed that, the film and most importantly, why you should support it.

Read it after the jump.

You’ve been involved in the entertainment industry for some time, and Rebound is your first time as writer/director. What’s it about?

Rebound tells the story of Claire, who finds her live-in boyfriend in bed with another woman. Unable to cope with the extreme loss and pain of the situation, she decides to just avoid it altogether and move back to her hometown of Chicago.

While on her cross country drive, her fried nerves and loneliness make her an easy target for anyone looking to pray on the weak and impressionable. After a domino of setbacks Claire gets stuck in a strange town and a dangerous situation. And she has to fight to survive, but a lot of the tension comes from the contradiction of how she fears and yet ends up oddly desiring this new world that has made her forget her reality.

What was the genesis of the film?

My original concept for this film came from the idea of how people can unravel after a break up. The loss of love is much like the loss of a person. Experiencing that kind of pain makes people say and do erratic things. The title was originally called PTSD (Post Traumatic Stress Disorder) and that was the title throughout production. If the term was not heavily associated with Veterans, I would have kept that title.

Have you always been a fan of the genre? What about it appeals to you?

I love the horror genre! I am not a huge fan of gore but I love suspense. For me it’s not always what’s behind the door, but the thrill of watching the doorknob turn.

Your grandfather is Elmore Leonard. What influence has he had, if any, on you as a storyteller?

Elmore has had a huge influence on me as a storyteller. What I have learned from him is the importance of simplicity. He is also a firm believer in not over-analyzing your characters or plots. Things should just fall into place organically.

Who are the biggest influences on your work? Were there any films or books that were an influence on Rebound?

I love when films take their time. I am a huge fan of Hitchcock, David Lynch and Stanley Kubrick. I love atmosphere and stories that are not too over the top. Some recent films that made me love movies again would be Drive, Shame and House of the Devil.

You’re currently raising funds on Indiegogo to complete the film. What is the money going toward?

We literally just put up our Indiegogo page. The film has been edited already and our composer is hard at work on our score. We just need a little extra funding to complete post-production, primarily sound mixing, visual effects and color correction. We are literally so close to the finish line.

Well I just started watching the show Lillyhammer on Netflix. I have to say it sort of rocked my world! I thought it was the most absurd/brilliant concept. It made me really appreciate the creators for coming up with such a brave idea.

As far as music, I’m a huge fan of 70s music. The Doobie Brothers, Bill Withers, The Commodores, James Taylor. Pretty much everything 70s. I was born in the wrong era.

Why should people support this project?

It’s a good question. I think the horror fans will like it because it’s something different. The direction the film goes in is not what you would expect.

I have been in development on a lot of horror films in the past and due to how things are going in the industry right now, it’s extremely hard to get funding. I have had some amazing horror projects with some great actors and directors attached.

This business is steering away from the creative too much in my opinion. It’s becoming more about the bottom line and I couldn’t take that for an answer.

With Rebound I decided to independently raise money myself and make the kind of movie I wanted to make. A lot of great people came out to support this movie by being a part of it.

I want to do right by them and finish this movie in the best way possible.