With the current season of House of Lies due for it’s explosive finale tonight it seems the perfect time for a recap on the season so far. At the opening of season two we find Galweather Stern under the management of interim CEO Julianne Hofschrager offering empty speeches and bogus promotions, whilst the enigmatic Marty Kaan (Don Cheadle) and Jeannie Van Der Hooven (Kristen Bell) struggle to recall the alcohol fuelled antics of Season 1’s finale.

The scene is quickly set that the direction Mrs Hofschrager is trying to take Galweather does not align with Marty’s plans and it appears Marty isn’t even necessarily a part of her master plan, despite being the biggest fish in the management consultancy pond. Whilst Marty and the gang jest at Jeannie’s fake promotion we’re introduced to a major client for this season… Sort of. No-one actually knows who the mysterious Mr Pincus is at first, but the next morning he’s revealed to be a major casino owner in Las Vegas, leading to one of the major themes of the season: Vegas, Baby!

Much of the season takes place in Sin City with Marty and his Pod enjoying all the treats Vegas has to offer and occasionally managing to do some work too. Whilst enjoying the delights of Vegas, Clyde Oberhalt (Ben Schwartz) introduces the team to the douchebag Dushkin Twins, old friends of his and Vegas club owners with a line to getting a meeting with Michael Carlson, the nutjob casino tycoon dominating The Strip.

Mr Pincus is a third generation casino owner and his casino, The Emerald, is struggling to avoid becoming a relic amidst a sea of forward thinking casinos with friends in much higher places. Being something of a dinosaur, he hates Carlson with a passion. The Pod pitch Mr Pincus a strategy to rebrand the casino and dramatically increase revenues by integrating online gambling, much like PokerStars have to offer, using Carlson as leverage.

At this point in steps Tamara (Nia Long) and blows open the entire deal. This pretty much marks her out as trouble from the outset and it’s wise not to trust her. Jeannie definitely doesn’t and spends her time trying to highlight her as a detriment to the team, however member-minded Marty and the goofy Doug and Clyde pay little attention to her. However thanks to the Dushkins, the Pod has already arranged a lucrative deal with plenty of “after-work” with Carlson, pitching him a revolutionary social gaming platform.

Back in L.A. we’re treated to a hilarious visit from none other than Matt Damon, presumably indirectly promoting his current water.org charity campaign, yet coming across as perhaps the biggest asshole in show business. Looking for help on a new charity Matt approaches Galweather to give him a strategy which will outdo George Clooney. DamonsChildren.org is the result, complete with a promo video which is 3 minutes of Damon running around amidst gunfire, shooting terrorists and snatching children from out of harms way.

During the latter half of the season, things really start to come to a head for Kaan and his associates. A bout of sexual relief whilst trying to secure a huge new client, USNB, for Galweather reveals that Hofschrager had recommended that USNB choose a team other than Marty’s. The outrage! This seals the deal and Marty decides that he’s going to destroy Julianne Hofschrager. At a corporate retreat Marty confronts Julianne for her continued passive aggression at which point she states “Your aggressive attitude will no longer be acceptable at Galweather”. Marty realises he’s had enough and decides to start his own firm.

We nexst pick up with the crew as they’re assigned to USNB where the shady and hopeless CEO is looking to run for governor. The trouble is USNB are rolling out what are referred to as “ghetto” loans, designed to ruin the poor. This leaves Marty and co with a heavy dilemma, whether to expose the CEO and lose the client or make another choice. Trusty old Marty spins it to his advantage, at some cost to his conscience. They spin the ghetto loans issue to pin blame elsewhere and Marty leaves with Kaan and Associates first client and a tidy endorsement.

Meanwhile Kaan’s ex wife Monica has been looking after their son Roscoe and getting experimental with her sexuality. All this is highly transparent though and Roscoe soon moves back in with his father, leaving Monica to spiral back into her drug, alcohol and hetero sex fuelled lifestyle. Elsewhere, Clyde has been doubting himself more and more after having to give a deposition in a wrongful death lawsuit for which he was partially responsible, or so he sees it. Also Doug (Josh Lawson) appears to finally be coming into his own, summoning the balls (shortly after emptying them) to go out and bring in his own new clients.

At the close of the season it all seems to fall apart for Marty, his Pod have bailed on him. Clyde’s taken his douchebags to Monica’s firm, Doug is sticking at Galweather and Jeannie has had her heart broken and is unreachable. As it stands, it’s Kaan but no Associates. This is indeed some end-game sh*t. Except it’s not because thankfully we’ll be seeing season 3 early next year. 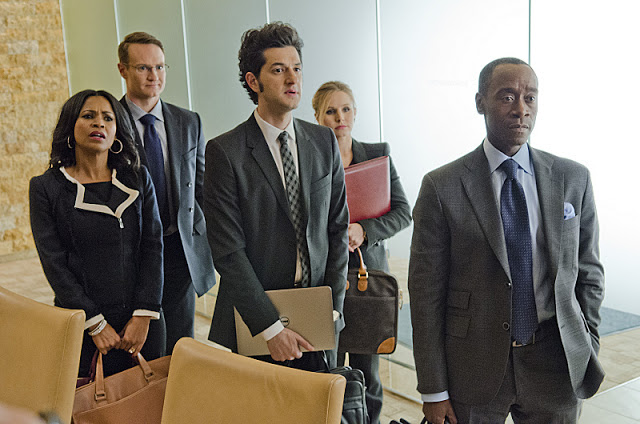