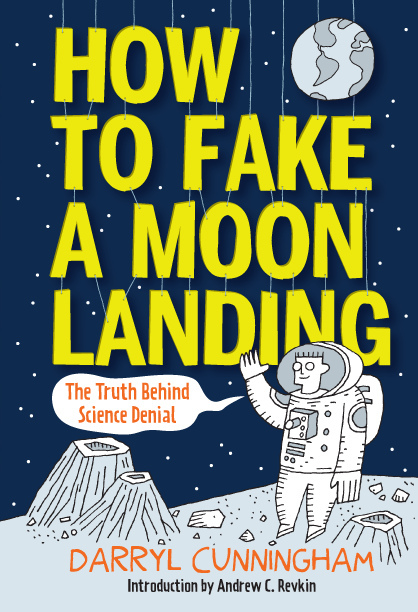 I have been a science/nature junkie from the day my dad brought home a mammoth’s tooth from Alaska and began explaining to me (in great detail)that the planet that I was standing on had been around for millions of years and that the earth had experienced several mass extinction events during its time. Holding up the tooth he told me something that both frightened and exhilarated me: That one of these extinction events caused the death of all the dinosaurs and that no one knew exactly what that was and there may come a day when humans will experience one for themselves.

From that moment on, I was hooked.

Unfortunately as I got older, I felt myself pulled away from science by teachers and a society that didn’t always put a value on the subject as a tool to expand one’s mind (just memorize these facts and pass the test). While I still enjoyed reading about various scientific topics like Quantum physics, Chaos Theory and Astrophysics, it was done on a purely self-education journey and not as a career (which I sadly regret).

But now, as I am reaching middle-age (Oh God, really?) I have witnessed that where science has always been an absolute (while still being fluid enough to accept or reject a theory when new evidence is introduced), the age of pseudo-science has come to rein supreme and people are willing to take such information as fact without questioning the politics behind it.

Darryl Cunningham, a science writer and cartoonist who specializes in taking pseudo-science to task, has had his UK book, Science Tales released here in the US (How to Fake A Moon Landing: Exposing the Myths of Science Denial) which not only busts various myths, he does so through the use of comics, making the argument that simplifying the message is the best way to educate the masses.

His interview is after the break


FOG!: How to Fake a Moon Landing is an interesting book in that it not only delves into exposing the myths of science denial, it does so via a comic book style that presents the facts behind controversial topics like Evolution, hydro-fracking and the MMR vaccination scandal in a simple to read format that would appeal to anyone. What made you take that particular approach in this book?

Cunningham: All these subjects are very complex. I took the approach that I wanted to make the book as simple, but also as visually interesting to read as possible. I didn’t want to overcomplicate the design or make the drawings so fancy that the reader would have to spend time working out what was going on and where people were standing, and so on. I wanted the reader to take in the information without even being aware that they were doing so. The comic book format is the perfect medium for delivering huge amounts of knowledge into people’s minds in a easy and pleasurable manner.

FOG!: We live in the information age so to speak and therefore anyone with a computer and an internet connection are able to sort through scientific data to find out that a lot of these myths have no real basis in fact. Why is it then that so many of these myth believers feel justified in perpetuating false information do you think?

Cunningham: For all sorts of reasons people can be heavily invested in believing in unscientific notions. People may have religious beliefs which are threatened by science or be involved in a business where they benefit from an unproven medical therapy. Those who believe in conspiracies, such as NASA faking the Moon landings, I suspect simply lack imagination. They can’t believe that the US could have been capable of such an incredible achievement so early on in the development of computers and other such advanced technologies. To those not born at the time it must seem particularly unlikely. This disbelief tied together with a suspicion of government leads naturally into thinking the whole thing must have been some kind of vast con. A con involving billions of dollars and thousands of people all around the world. Much easier to have actually gone to the Moon really, which is what they did. The knowledge easily found on the internet these days is a double-edged sword. Yes, the truth can be found easily, but so can lies, rumours, and deliberately fraudulent evidence. It’s not enough just to read information that shores up your beliefs and ignore the rest. You have to challenge your own beliefs no matter how painful that can sometimes be, As a teenager, I was big believer in UFOs, ghosts, and all sorts of foolish but fascinating things. So I have been through the difficult process of wising up. 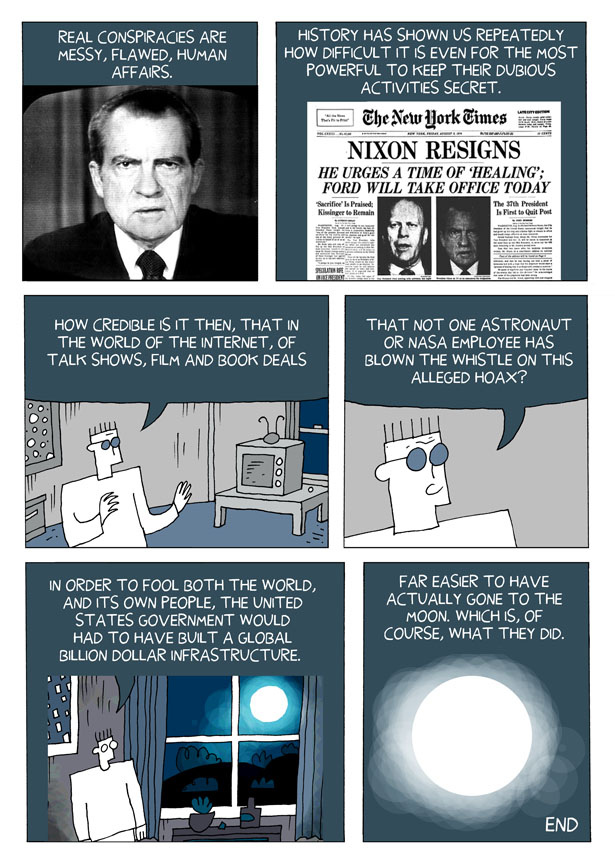 FOG!: One of the things that stood out about your book was how it would appeal to older kids and teenagers. The comic book/graphic novel has to be able to disseminate information simply due to its structure, and in doing so, it gets to lose a lot of the fluff that can turn a student off of learning. Do you feel that a graphic novel textbook that discusses information that has always been notoriously under-appreciated in schools like science, could help create an enthusiasm for the subject?

Cunningham: I do think, for the reasons I’ve stated above, that the comic strip format is particularly suited to the delivery of knowledge. Traditionally comics have been seen as a low-brow dumb-ass medium, and of course, it can be, (and I still often enjoy it when it is). But that’s not all the medium is capable of. We are living at a time when cartoonists are branching out into many other areas, choosing to write about a whole range of diverse subjects. I’d like to see more graphic works in schools and libraries. Teachers and librarians do seem to be waking up to the possibilities of the form. Check out My Friend Dahmer by Derf Backderf, or The Carter Family: Don’t Forget This Song by Frank Young and David Lasky.

FOG!: In writing this book, what did you find to be the most misunderstood science fact that people had?

Cunningham: It’s not one particular fact that I find people misunderstand, so much, but the process by which science works. Real science is testable and reproducible, and whatever fails these tests falls away, because it isn’t true. The world isn’t run on orgone energy and we don’t communicate via telepathy. We’ve tried all these other things and there has been simply nothing to them. Which is a shame, but that’s the brutal truth. If you want to see how science has succeeded in the world, then turn on any light switch. Science works, because science is reality itself.


Cunningham: I’m working on an, as yet, unnamed book on political themes. This will look at the financial crisis, how it came about, and how austerity measures all across the globe have failed to undo the damage. The book will also take a look at the psychological and neurological differences between liberals and conservatives. What are the strengths and weakness of both types of political thinking? It’s an ambitious idea for a book. I’ve started it with a chapter on Libertarian guru Ayn Rand, who is a fascinating if monstrous character.


(Many thanks to Darryl Cunningham for indulging this junkie and providing her with a lovely gift to give all of her family members who keep referring her to chiropractors…and, yes, they too have a chapter in the book)