The thing about history, baby, is that it goes way back.   All the way back.

We stroll down memory lane with Miss Lane, get lost in a Legacy and follow B.P.R.D’s Simon Anders back to a small Czech town to investigate the origins of the vampire disease.

Will he escape unscathed before having to unleash his concealed garlic?

Aw yeah, everybody. It’s the end of an era, not only for Superman and his family, but for fans of a certain kind of book formerly put out under the Johnny DC banner.

In 2008, Art (Baltazar) & Franco gave us elementary school versions of our favorite Titans in Tiny Titans.

The Eisner Award winning book proved itself to be fun for all ages, including not only great stories for kids but nods to serious DC continuity and clever plays on the DC tropes. A Lunch Lady Darkseid ruled the cafeteria with Anti-Slop.

After the New 52 reboot, Cyborg gets new shoes and the guys were put on a new book, Superman Family Adventures, filled with all of the clever comic book industry and Superman movie quotes of the previous series, but concentrating on the family aspect of Superman. We’ve got Clark, The Kents, Jimmy, Chief, Lois, Connor, Kara and the Super Pets.

Nearly all of the Tiny Titans, the Justice League, Steel, Lex and even Miss Teschemacher sneak their way into the send off issue of this book. It is a bittersweet moment to end this five year run of the best kids comics DC has ever done.

Even Superman’s parents Lara-El and Jor-El make an appearance in the final issue, with an interesting twist on how the two survived the explosion on Krypt’n.

Unfortunately for us, we won’t get to see any more of Art & Franco on this book but look forward to them taking on The Green Team in the New 52, a story about trillionaire teenagers. And guess what? For more all ages comics, Art & Franco have launched a Kickstarter for new publisher Aw Yeah Comics and are fully funded. Expect some issues of Aw Yeah Comics #1 starring Action Cat and Adventure Bug at C2E2 this weekend, and distro to our hands very soon.

Aw yeah. Congrats, Art & Franco! And thanks for loading up the cover with lots of pink. I like pink very much, Lois! True story. 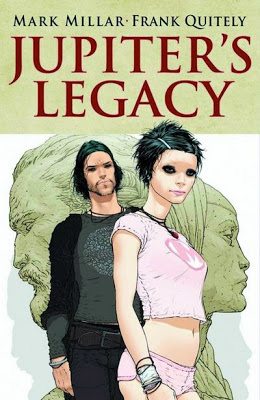 This is the first issue of a highly anticipated book here from industry juggernauts Mark Millar and Frank Quitely, last seen working together years ago on The Authority.

In recent years, Quitely had a great run on Morrison’s pre-New 52 Batman and Robin whereas Millar has been working on more movie deals, overseeing his comics become movies and has teamed up with Dave Gibbons on Secret Service and Lenil Yu on Super Crooks, and Steve McNiven on Nemesis.

There’s probably more (ahem Hit Girl, Kick Ass 2, Superior) worth mentioning as well, but the aforementioned series all had me hooked.

Millar has, if not a formula, at least a very structured format to his limited series. All are meant to stand alone in about 6 issues. All can very easily be made into a movie. He’s great at that. Icon and Image produce the books, and he can retain all of the creator owned rights. Some series like War Heroes never see completion! Too bad, though, I think the book would do well in the current market.

I guess all the filibustering I’m managing to churn out about Millar’s career is that while this is a highly anticipated book, supposedly of much scope, and featuring a mysterious long lost island mixed with two generations of superheroes is to have us chomping at the bit for more. We’ve got the old crusty Superman and Justice Society types taking down the bad guys while the sons and daughters are either partying or vying for attention from the media.

I’m sorry, this book doesn’t have me after the first issue like Nemesis, Super Crooks and Secret Service did. On the last page reveal on issue #1, I was just sort of glad it was over. I want my comics to make my heart pound on a cliffhanger, not just be glad that some superheroes’ daughter might have possibly OD’d. Why would I care? I only spent 3 pages with her. I don’t know, maybe I’m salty. Maybe issue #2 will pick me up like a cup of coffee but this one was snoozeville.

Quitely’s pages are amazing, of course. Great to see him draw classic superheroes and then beautiful teenage girls. Brandon Sampson looks a little like the artist himself. We’ll see how it goes. Maybe the Girl With The Dragon Tattoo wakes up from her drug crash next issue. Sure. Whatever. I guess. Take my money. 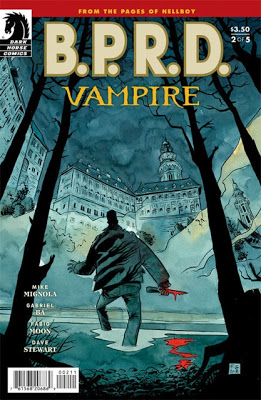 I’m not exactly sure why I’m getting at this book in the second issue of the series and completely missed the first, but I know I’m in for the long hall.

Hellboy mastermind Mike Mignola writes this vampire tale that acts as a direct sequel to B.P.R.D.: 1948. Brazilian brothers Fábio Moon and Gabriel Bá that brought us the Vertigo mini-series Daytripper in 2011 are credited as co-writers and also the artists on the book.

We bask in the shadows of a classic vampire origin tale, following former merchant marine and current B.P.R.D. field agent Simon Anders to a Czech town.

When he gets there he discovers there are only women in the town that is also occupied by a large castle built in 1253. A wonderful series of alias for the vampire Wilhelm in various period garb throughout the ages was reminiscent of Bruce Wayne’s travel back to the present in Batman: The Return of Bruce Wayne.

Nothing to report from the castle, but a witch grabs Simon’s hand and urges him and companion Hana to follow the “serpent to the heart”. Likely this means follow the river to the woods, where they will discover more about the vampires. In the forest, it looks like they have been set up!

This issue has all the best that Hellboy, Daytripper, Buffy and Doctor Who have to offer, replete with a cute female companion to act as a guide and balancing force in the story. Moon and Bá have a thick line cartooning style that complements the look of the B.P.R.D. / Hellboy universe and draw conversations between people very naturally.

Great art and story here. Worth investigating further…into the woods!