A Rather Quirky Tale of Survival


A Boy and His Dog 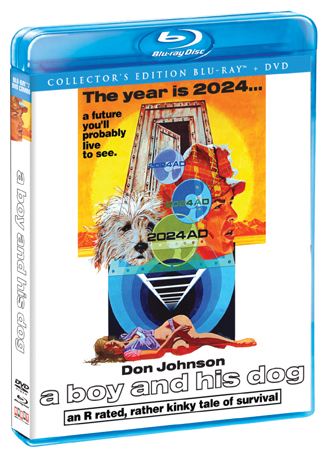 Directed by L.Q. Jones and based on the award-winning novella by acclaimed science-fiction author Harlan Ellison, A Boy and his Dog is a dark and often wickedly funny trip through a post-apocalyptic world, where the friendship between a boy and his dog is the only currency that matters. On August, 6th, 2013 Shout! Factory will debut this off-beat cult film classic for the first time on Blu-ray. Winner of the 1976 Hugo Award for Best Dramatic Presentation, A Boy and his Dog is presented as a Collector’s Edition Blu-ray™ + DVD combo pack, which features a reversible wrap with collectible key art as well as new bonus content , including an all-new conversation with Harlan Ellison and L.Q. Jones.

World War IV lasted only five days but has ravaged Earth, leaving its survivors to battle for food, shelter and companionship in a post-atomic wasteland. This celebrated sci-fi tale follows the exploits of a young man, Vic (Don Johnson), and his sardonic telepathic dog, Blood, as they struggle through the barren wilderness in search of food and women. In the midst of their meager existence, Vic and Blood encounter Quilla June (Susanne Benton), a dubious young woman who lures them into a surreal city deep beneath the earth’s surface. Initially elated to find a colony of survivors, Vic and Blood quickly learn this city is not what it seems. Fans of this cult classic can pre-order their copy at http://www.shoutfactory.com/?q=node/217603