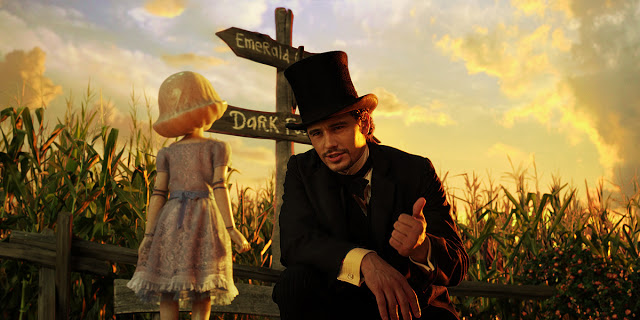 When Oscar Diggs (James Franco), a small-time circus magician with dubious ethics, is hurled away from dusty Kansas to the vibrant Land of Oz, he thinks he’s hit the jackpot. Fame and fortune are his for the taking. That is until he meets three witches: Theodora (Mila Kunis), Evanora (Rachel Weisz) and Glinda (Michelle Williams), who are not convinced he is the great wizard everyone’s been expecting.  Reluctantly drawn into the epic problems facing the Land of Oz and its inhabitants, Oscar must find out who is good and who is evil before it is too late.  Putting his magical arts to use through illusion, ingenuity and even a bit of wizardry, Oscar transforms himself not only into a great wizard but into a better man as well.

Go Deeper Into the Spectacular Land of Oz
Disney’s
OZ THE GREAT AND POWERFUL
New To Blu-ray™ Combo Pack, Digital and On-Demand – June 11, 2013 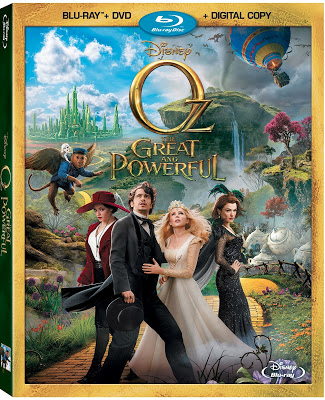 Disney’s “Oz The Great and Powerful” will once again provide audiences with a magical entertainment experience when it debuts for in-home release on Blu-ray™ Combo Pack, DVD, Digital and On-Demand, June 11, 2013.

A must-own for any home entertainment collection, the Blu-ray Combo Pack (Blu-ray + DVD + Digital Copy) of “Oz The Great and Powerful” brings the epic adventure to life with its vibrantly colorful picture and sound, and boasts a sensational variety of never-before-seen bonus materials including: “The Magic of ‘Oz The Great and Powerful’ Second Screen Feature” that provides viewers with an immersive opportunity to journey into the fantastical lands of Oz; James Franco’s personal story of his journey to the land of Oz that is produced and directed by the Oscar® nominated star himself; Golden Globe® nominee Mila Kunis’ makeup metamorphosis which is hosted by Academy Award®-winning makeup artist Howard Berger; A back-stage journey through each of the visual effects process that brought China Girl to life including an interview with Joey King; and much more. Additionally, all Blu-ray and DVD products include a digital copy of the film allowing consumers to watch “Oz The Great and Powerful” at home, in their car, and/or anywhere they go.

To learn more and stay connected with the film, please…

“Temple Run” Oz Game:
In celebration of the in-home release, Temple Run: Oz will introduce China Girl as an all-new character to the exhilarating running experience (which launched during the theatrical release). The tiny China Girl might be small in size but she is packed with speed and a big attitude. Players will be able to run through all three stunning environments including the latest release Winkie Country and be able to use the “Head Start” feature to fast travel to any location. To learn more, please visit iTunes at https://bit.ly/WgSWAk or Google Play at https://bit.ly/15tVpYH.

About The Walt Disney Studios:
For more than 85 years, The Walt Disney Studios has been the foundation on which The Walt Disney Company was built. Today, the Studio brings quality movies, music and stage plays to consumers throughout the world. Feature films are released under the following banners: Disney, including Walt Disney Animation Studios and Pixar Animation Studios; Disneynature; Marvel Studios; and Touchstone Pictures, the banner under which live-action films from DreamWorks Studios are distributed. The Disney Music Group encompasses the Walt Disney Records and Hollywood Records labels, as well as Disney Music Publishing. The Disney Theatrical Group produces and licenses live events, including Disney on Broadway, Disney On Ice and Disney Live!.

In this article:DVD News, Movies/DVD, Press Release, Wizard of Oz