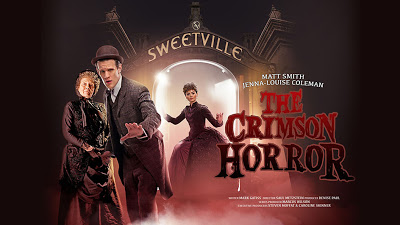 This fantastically paced episode leads with not the usual Doctor-pops-into-a-situation-says-hello-hello-what’s-this?, but the perspective of the Doctor Who Irregulars.

Not surprisingly, fans have been clamoring for a spin off series starring this trio.

Will it happen? Who knows.

The three are on the trail of a case in Victorian Yorkshire after bodies that are stained a candle wax color of crimson are discovered in a river. A fainting-prone man whose brother has died of this fate brings his case to Madame Vastra. An examination of a photograph of one of the eyes of the corpse yields an image of the Doctor. They are lead to a factory village named Sweetsville, run by the dourly intimidating Mrs. Gillyflower (British television star Diana Rigg, who portrayed Emma Peel on the 60s show The Avengers and more recently has been on Game of Thrones) with assistance from her blind daughter Ada (Rigg’s real life daughter, Rachael Stirling.)

Jenny infiltrates Sweetville and after snooping around, finds a zombie-like, crimson-colored Doctor shackled in a dungeon room. She helps free him and the Doctor rids himself of the crimson curse by activating a machine with his sonic screwdriver (later in the episode, there’s a great moment where Clara upstages the screwdriver with a chair.) In a brilliantly shot sepia- toned montage, the Doctor brings Jenny up to speed on how he and Clara had their interest drawn to Sweetville, met the conniving Mrs. Gillyflower, and were subsequently captured.

After rescuing Clara, Team Doctor reassembles to try to solve the mystery of Sweetsville, including the identity of Miss Gillyflower’s “silent partner,” Mr. Sweet. They discover the plan to blast the crimson colored toxin that Sweetsville has been experimenting on into the stratosphere. The Doctor confronts Gillyflower and tells her that in the wrong hands, the venom could wipe out all life on the planet. Gillyflower shows him her hands and says, “you know what these are?—the wrong hands.”

Mr. Sweet is revealed—I’ll leave the spoiler out and just say that he is a total sucker. Gillyflower is defeated, in part by her own daughter who has been informed by the Doctor that she was one of Sweetsville’s experiments. The other helping hand is from Strax, who has enthusiastically scaled a building to exchange fire with Gillyflower.

The Doctor and Clara say goodbye to their colleagues Strax, Madame Vastra, and Jenny, although they’ll be seeing them soon enough. Back home, Clara finds she’s in a bit of a pickle when the kids she babysits for finds pictures of her with the crew of “Cold War,”  the ghost hunters from “Hide,”and in a portrait from Victorian London’s “The Snowmen.” Ooops—word to time travellers, don’t mug for the camera.

This episode was written by Mark Gatiss, who penned one of my favorite episodes so far this season, “Cold War.” He’s my new Who favorite and this episode, along with “Cold War” stand out as high points of this season.

I give this episode a solid A for great cast, clever writing, and an all around fun episode.