Defiance has become SyFy’s newest hit, with its combination of science fiction, special effects, and character-driven drama, which is not surprising, given it was created by Rockne S O’Bannon of Farscape fame.

But of all the different races and species on Defiance, some of the most intriguing characters are the “non-human” ones, such as the deadpan, no nonsense Doc Yewll, an Indogene.

I interviewed actress Trenna Keating – the woman behind the makeup – on what it’s like to play a strong, shrewd, and educated female who speaks her mind and is not easily intimidated by anyone or anything.

FOG!:  Have you played the Defiance video game yet?

Trenna Keating:  I’ve watched a lot of things about it online, but I haven’t played it yet. I’m not a gamer, but I may have to become one.

How enjoyable is it to play a character that doesn’t seem to take any nonsense?

I love playing Doc. She gets the best lines. She gets to say all those things that we, as humans, often wish we could say, but are too polite to. I don’t think Doc even knows the meaning of the word “polite.” She’s a riot to play.

Can you describe your daily make-up process as Doc Yewll? And is it uncomfortable?

The make-up usually takes a little over 2 hours to get into. First, they put a skull cap over my hair, then they slide the mask over my head. The mask is all one piece. Then they take paint brushes and stick them through the eyes, nose, mouth and ear holes on the mask and glue it to my face. Then they paint the mask using an airbrush. They finish by painting my eyes, lips and inside my nose and ears. It’s LOVELY! It is a bit uncomfortable – sort of like wearing a sleeping bag around your head on a hot summer day – but you do sort of get used to it.

Clearly, Doc Yewll is unlike any character you’ve ever portrayed before. Since you’re playing a non-human, is there any type of prep or research you were able to do? How do you get into character?

I actually watched a lot of Bones to prep for it!

I think Doc and the character of Temperance Brennan are similar. Because yes, Doc is an alien, but for me, it was important to understand what it feels like to be an outsider. She doesn’t understand humans and they don’t understand her, but she is comfortable with that. As far as getting into character goes, well, I studied clowning and neutral mask quite extensively for several years, so that training certainly helps with playing Doc.

Is there any pressure playing a character that is “original” (one that doesn’t already have a fan base)? Or is it a little more freeing to create her?

No, I certainly felt free to create Doc. The writers on this show are incredible and the producers and directors were always open to discussing thoughts about our characters. And because it is the first season, I felt like it was an open and collaborative effort in carving out who these characters are and what makes them tick.

Are there any surprises or plot lines focusing on Doc Yewll this season?

There is lots of Doc to come! 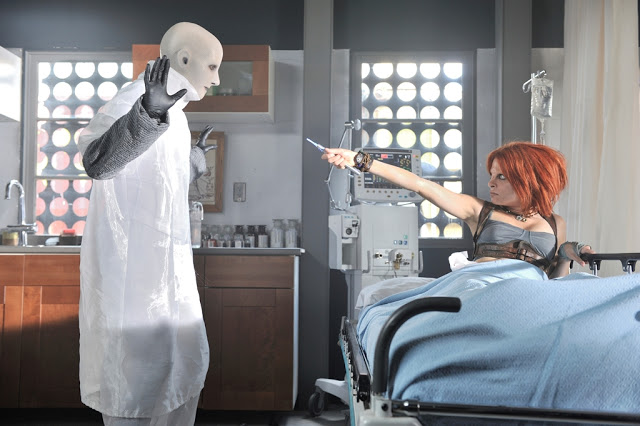 Were you a Farscape fan? What about of other sci-fi (in general or specific)?

I watched some Farscape after I got cast but hadn’t seen it prior. I was a huge Firefly fan, though.

I heard you love board games… What else do you “geek out” over?

Ummm…YEAH! I LOVE Settlers of Catan! I love Scrabble, Crib, Poker…pretty much any game.

And I love to read; I’ll read ALMOST anything……oh, and I also love Grumpy Cat. I think I love that cat more than anyone on the planet. I want Doc Yewll to have him as a pet.

I hope this question make sense: Speaking as a female, from Stargate to Battlestar Galactica to even Star Trek and Star Wars, sci-fi (and fantasy — like, Game of Thrones, for example, or even Ender’s Game) tends to have strong, defined female characters — often while fully-clothed, too! Why do you think this is, compared to other literary and cinematic genres? How does it feel for your character to be a part of that? Your character is a strong doctor — are you ready to be a potential role model to girls and women?

Well, I’m not really sure why sci-fi tends to have stronger, more defined, and clothed women, but I’m sure glad they do! All of my friends who are into sci-fi are into it because they have a real passion for stories and storytelling, so perhaps that has something to do with it; the story is more important than the spectacle.

The actors on Defiance have brought so much heart to their roles, which is much easier to do when you have strong scripts like we do, and the women are no exception to this. All the female characters are very dedicated to their missions, whatever that may be, like, being the best mayor possible, the best doctor, the best businesswoman, or the best wife and mother. I feel so grateful to be a part of this passionate group. I truly hope this show does set an example for women and if I can contribute to setting that example, I’m thrilled!

Have you ever attended any conventions, specifically ones like ComicCon and Dragon*Con? If you haven’t, are you planning to? Are you excited? Nervous?

Sci-fi/fantasy fans have some of the most loyal, yet rabid, fans around… I haven’t ever been to any of these conventions, but yes, I would really like to go and experience it. I think that would be incredible!