Good science fiction can sometimes be a hard thing to find.

You need to find a good story, something that will suck you in from the very first page and keep you going to the very end of the book, leaving you hoping for sequels.

You need a good writing style that keeps you engaged, with a fresh vocabulary.  Classic science fiction has come to be known for its lacking in fully-developed characters, so for good science fiction you’re going to want some well-rounded characters.

Good science fiction is a regular book that deserves to be shelved next to any other award-winning, bestselling work of regular fiction, and yet it involves elements, storylines and plot involving elements of the future and science. 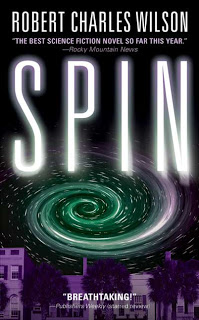 In Spin, Tyler Dupree still remembers that fateful night, outside under the stars with his best friend in the whole world, Jason Lawton, and the girl he’s in love with – who just so happens to be Jason’s sister – Diane. Tyler’s mother works for Jason and Diane’s parents, looking after their mighty mansion of a house.

The Lawton’s have always been very well off, while the Duprees have always struggled to get by.  But on this night all the stars suddenly go out, turning the night’s sky completely and eternally black.  And life continues on for the world, as everyone wonders what in heavens has happened to all the stars, as well as the moon.  As research is done, it is revealed that somehow the planet is encapsulated in some sort of sphere that allows sunlight to penetrate through as if everything is normal, but it is also discovered that beyond the confines of this sphere, space is moving along much faster: for every second and minute on earth, the universe is aging by years and decades.

The world learns to live with this “little problem,” wondering if tomorrow might just be the end of it all; the universe is after all aging at an incredibly fast rate, and the sun only has a couple billion years of hydrogen left to burn through.  Meanwhile Tyler, Jason and Diane grow up and become adults, living in the world, drifting apart and then coming together occasionally over the years.  Jason is a genius after all, working for his father’s company that soon becomes one of the most important on the planet, after the development of what comes to be known the “spin,” while Tyler lives his life as an ordinary doctor who is inevitably pulled into the lives of the brilliant but doomed Lawtons.

Then there is the plan created by Jason to grow a civilization from scratch on Mars, where time is moving so much faster, so years on Earth are millennia and eons for Mars, and everything changes when the first Martian arrives on Earth.  Mars soon somehow develops its own sphere and spin and is put under the same conditions as Earth.  It all seems to be part of the unbelievable plan of the beings that come to be called the Hypotheticals.  And then the arch arrives from nowhere, creating a gateway to another world. 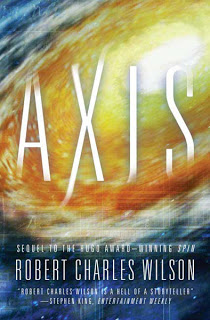 In Axis, the god-like beings known as the Hypotheticals are doing what they do best: messing with the ways of the cosmos.

In this sequel the reader travels through the giant arch gate located in the Indian Ocean and into the new and different world known as Equatoria, which was apparently created for humanity by these Hypotheticals.  Lise Adams travels to Equatoria in search of her missing father.

She hires Turk Findley, who has a less than clean rap sheet, to fly her to her father’s last known destination.

Lise’s father was obsessed with the Hypotheticals, so now she hopes to not only find out what happened to him, but perhaps get some answers to these mysterious beings.

Then there is Isaac, a genetically engineered child who is to serve as a conduit between humanity and the Hypotheticals, and now he is coming of age and his true fruition will come to pass.  Lise and Turk meet up with Isaac and they continue their journey deeper into Equatoria in search of answers.

And it seems as if the Hypotheticals are making things happen, as underground something mighty is awoken and the earth begins to tremble. 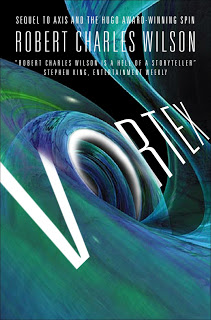 In the final volume of the trilogy, Vortex, through the power of the enigmatic beings known as the Hypotheticals, Turk has been transported ten thousand years into the future, along with the unique character of Isaac Dvali, who was created as a conduit to the Hypotheticals.

They find themselves joining with a population known as the Vox, who travel on a massive island that is the size of a continent.  The Vox have been traveling for centuries through the arches to different worlds.

They know that the world known as Earth, which is now in ruin and degradation, but it is the place where they hope to finally face and commune with the Hypotheticals.

The strange twist to this is that this story of Findley, Isaac and the Vox is being told through the journal writings of a troubled man known as Orin Mather, ten thousand years in the past (set in the world and time of Spin), who is being helped by a psychiatrist, Sandra Cole, as well as a cop, Bose.  They’re all trying to deal with this story set in the distant future and decide whether it’s true or a work of fantastic fiction.

The key with this trilogy from bestselling author Robert Charles Wilson is that each book represents an individual story that can be fully enjoyed on its own, with little prior knowledge of the previous books needed, but by the same token when one reads all three books they are like three separate pieces of a three-piece puzzle that lock together to form an entire story.

So if you’re looking for three really good science fiction books to enjoy, whether on their own or as a riveting trilogy, look no further than Robert Charles Wilson’s Spin series.