You have to respect a movie which starts with an off-screen earthquake.

You instantly realize just how bad the movie is going to be and brace yourself for the worst.

That, in essence, is Time Walker.

A mummy movie made in the 1980s that hasn’t checked up on the advances in Egyptology or international relations regarding mummies since the 1940s. 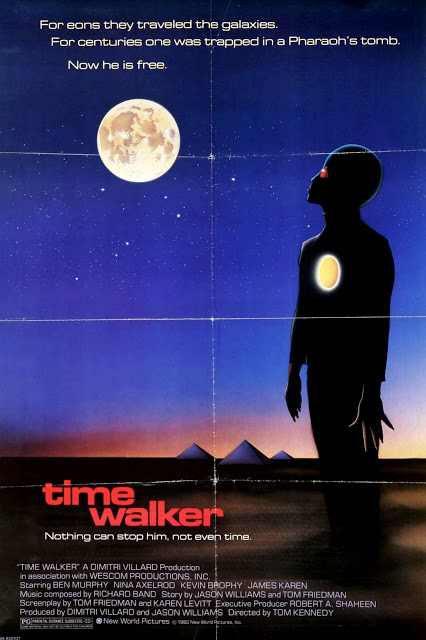 There’s two aspects of the monster’s biology in this movie to tackle.  One of them is actually rather interesting despite the film’s rampant stupidity.  We’ll start there.  I’m a desert-first kind of guy. 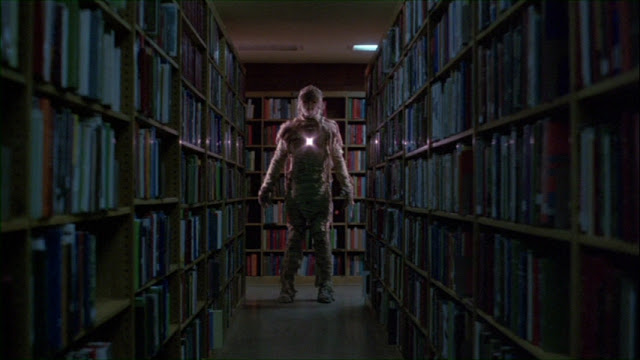 The mummy of this movie is covered in a green, algae or lichen-like, flesh eating fungus.  Everyone he touches in his quest to recover its artifacts (it’s a mummy, it’s what they do in movies half the time) leaves people infected with the deadly spores.  They immediately take root and start to feed.  For me, this immediately brings to mind the infamous flesh eating bacteria (which is actually several varieties of bacteria which have the same general effect).

It’s an interesting addition to the Mummy mythos because of one proposed idea behind the so-called “Mummy’s Curse”: that various bacterial agents trapped inside along with noxious gasses left over from what little decomposition has occurred infects and sickens a potential tomb robber with a disease that wastes them away.  In other words: the look ‘cursed’.

It’s not true, mind you, but it is an interesting idea.

Here, the fungus takes place of the bacteria (fungi are also important decomposers too and do release hazardous spores), but the principle is the same. 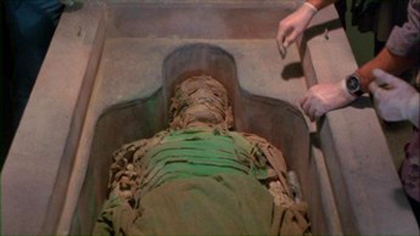 The magical ‘curse’ being something more mundane.  Not realty in this case, but close to it.  It’s sadly elevated to cinematic levels of power, increasing its infection and growth time exponentially beyond what they normally would be in a real organism.   In one instance a student brushes his finger along the (recently revived) fungus and instead of just latching onto his fingertip, it makes a ‘burning’ sound on contact and envelops his entire index finger. 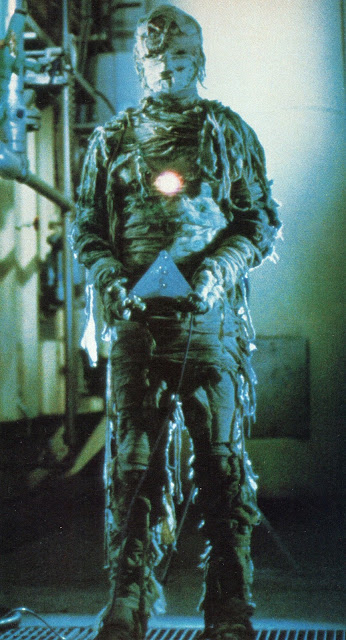 I should also mention that the fungus was inert until revived (along with the mummy) by the scientists.  Surviving things have been found in tombs before, mostly seeds which could still be grown after all that time.  Here, unlike the seeds, the fungus and mummy are revived by radiation: an extreme overdose of X-Ray radiation to be specific.

Later in the film, the active fungus is shown to grow extremely rapidly when exposed to X-Rays.

This would indicate that X-Rays play a part in its energy needs and fuel, much like sunlight does for plants.

Using X-Rays for energy is simply not found in the natural world as far as I’m aware.  That is the first hint as to the true identity of the mummy.  Rather than a human, the mummy is . . . well, I think Joel Hodgson said it best:

“Turns out the mummy is a lame Styrofoam-headed alien.”

I’ve already talked about how the gray’s work, and this one is little different. Its mouth is extremely tiny, but it also has superhuman strength and fingers that end in long claw-like nails.

The super strength is a standard mummy thing (and may make the mummy weigh about a quarter ton), but the Lee Press-On Nails are just silly.

With their shape, if they are claws, they’d get in the way of manipulating tools.  Not good for a sentient species. What makes the whole thing weirder is that the alien’s biology is immune to the fungus’ flesh eating effects and the Fungus’ very nature is a byproduct of the alien’s crystal-based technology. 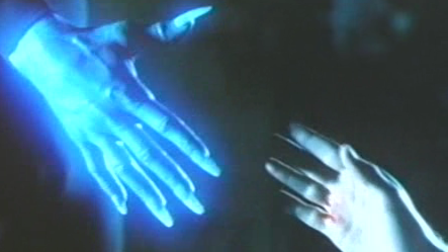 What else can you really add to that? There is an implicitly inter-stellar teleportation device in fiction which covers the user in flesh eating fungi.  The aliens apparently didn’t give a crap about that sort of drawbacks. Which leads into something the filmmakers really didn’t take into consideration.

Okay, there’s a LOT of things the filmmakers didn’t take into consideration, but just bear with me.

This is where the movie really falls apart, because it wants to have its cake and eat it too.  The mummy goes around and collects its artifacts without a care for those around it.  Killing and infecting several people during its quest.  It is indifferent to the plight of humanity and is said to be the REAL cause of the death of King Tut.

The sound you are hearing is several Egyptologists screaming.  You can also hear it whenever Ancient Aliens is shown on the History Channel.

The last third of the film has several people going on about how the alien just wants to go home, in tones that are rather understanding and accepting.   However, there’s just one problem with that: IT MURDERED AND INFECTED SEVERAL PEOPLE WITH A DEADLY FUNGUS.  So when one of the scientists takes a bullet for the revealed alien at the end of the movie and is then teleported away with said alien, I can’t help but think the poor bastard is immediately put in a zoo or dissected, if not just overwhelmed by the fungus.   These aliens are not benevolent.  They aren’t even malevolent.  They just don’t care.  The filmmakers are unaware of what kind of monster they’ve made. 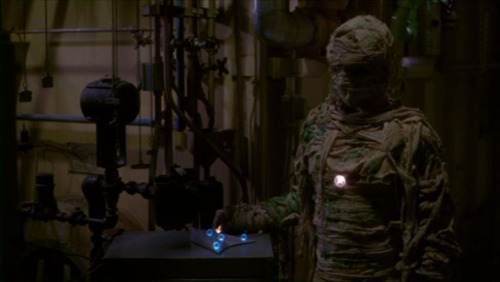 They try to make the monster look not so bad, but that works a whole lot better without a body count.  Also, it helps to when the monster has a legitimate grievance against the people it’s attacking.  Here, the people who had the crystals the mummy wanted didn’t even know they were stolen, let alone the mummy’s.  That doesn’t make him sympathetic.  It makes him a jerk.

This movie was featured in Season 4 of Mystery Science Theater 3000, under the title Being from Another Planet (which spoils the “twist” ending).  At the time, they declared it to be one of the worst movies they’d ever seen, matched only by Castle of Fu Manchu.  That was before they knew of things like Beast of Yucca Flats and Manos: the Hands of Fate, but it’s still one hell of a stinker, and the botched symbolism of the monster really clinches it.

In this article:Monsters, Movies/DVD, Science/Nature, Written by Salvatore S. Cucinotta