Released to celebrate the 300th role of iconic Japanese actor Kazuo Hasegawa, An Actor’s Revenge (Yukinojo Henge) is a superbly eclectic offering from director Kon Ichikawa (The Harp of Burma), as surreal as it is stylized and mesmerizing cinema.

Hasegawa plays the double-role of Yukinojo Nakamura – a kabuki actor who (like Hasegawa himself) is renowned for being an onnagata, or female impersonat’or – as well as the dashing thief Yamitaro, who likes to behaves a bit like, well, Robin Hood.’ 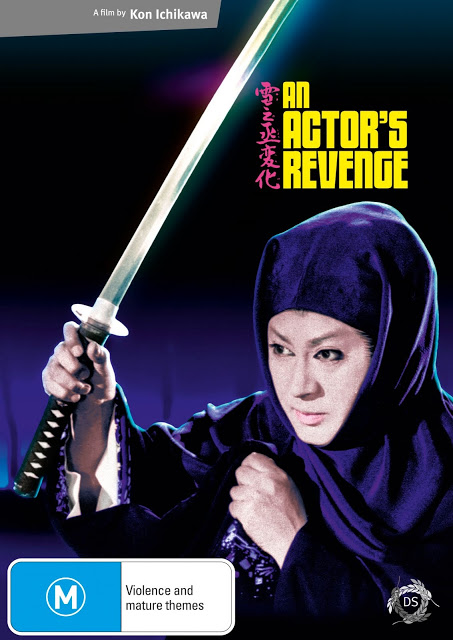 When Yukinojo chances across the three men who drove his parents to suicide decades earlier, he sets in motion a plan for revenge worthy of Shakespeare; what he discovers he can’t control are the ulterior ramifications of this revenge-play, as his actions shatter innocent lives.

It’s difficult to overcome the fact that lead man Hasegawa was pushing 55 here; while he was reprising a role he played before (in 1935), he’s obviously too old to push the sensuality angle of the onnagata, yet still somehow tweaks it on several levels.

For his part director Ishikawa doesn’t even try to suspend disbelief. Into this high drama he winds liberal doses of comedy, kabuki-style sets and visuals that are stretched out within a pop art context, and some innovative sword-fighting moments that border on the dream-like.

Realism this most certainly is not, and that’s the film’s beauty. 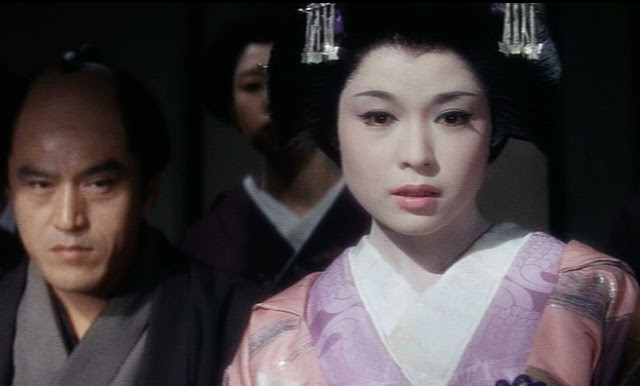 Adding to the spice in An Actor’s Revenge is a modern jazz soundtrack, while the acting chops are ably supported by Shintaro Katsu (of Zatoichi fame) and the stunning Ayako Wakao, who previously shone as Eiko in Kenji Mizoguchi‘s The Geisha (1953), and is devastating here.

While not Ishikawa’s grandest achievement, it’s still a hypnagogic gem well worth the viewing, and the cool cats at Madman Entertainment in Australia made it available to the domestic market there for the first time in 2010 – which is how I picked up the DVD.

Madman have been doing some magnificent things, not only helping to establish a foothold Downunder for pioneers of Japanese movie-making like Ichikawa, Akira Kurosawa, Seijun Suzuki, and their ilk, but creating inroads for contemporary anime. In fact Madman has held well over 95% of the local market of things Japanese for over a decade.

So, being a fellow Aussie, not to mention also from Melbourne, I felt it was high time we had a chat about these particular things. I ended up talking with Christian Were (the product manager of Madman’s Eastern Eye/Asylum offshoots) and Sylvester Ip (product manager for Anime). For simplicity’s sake in the following Q&A, let’s mark them down as CW and SI.

What is Madman’s mission in Australia re: Japanese cinema?

CW: “Our aim is to primarily curate what we think is the best Japanese content out there and bring it to Australian shores. Here in Australia we also have a number of unique cultural opportunities for Madman to help people to engage and interact with Japanese cinema, from the large number of anime and pop culture conventions through to culture festivals and the annual Japanese Film Festival.” 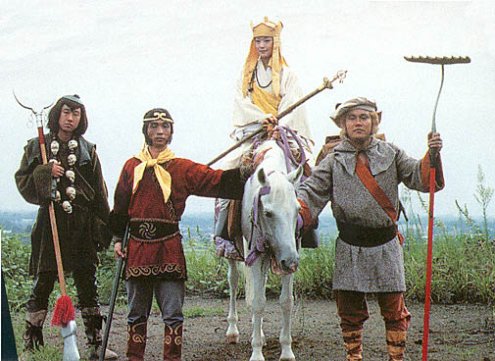 How receptive are Australian audiences to Japanese cinema, TV and anime?

CW: “Australia has had a long history with Japanese cinema, TV and anime even if we didn’t always realise it at the time. For many years TV has been a window on Japanese culture through shows like Monkey Magic, Shintaro, Star Blazers, G-Force and Astroboy; and also culturally adjacent shows like Mighty Morphin’ Power Rangers. I think this has made Australia more receptive to seeing media from Japan. Also, for cinema, the growth of the Japanese Film Festival over the years demonstrates the popularity of the cinema here.”

SI: “I think that all it takes is the right title, under the right conditions. These are few and far between, but the breakout successes for us have all had that perfect mix of ‘right place, right time’. Having the right TV networks believe in the genre also helps. Shows like Neon Genesis Evangelion and Ghost in the Shell: Stand Alone Complex had the luxury of primetime evening TV exposure. And you also have the likes of Naruto and Dragon Ball Z, which have TV support and are popular properties worldwide in their own right – they just have that ‘it’ factor with both youth and older fan audiences alike. 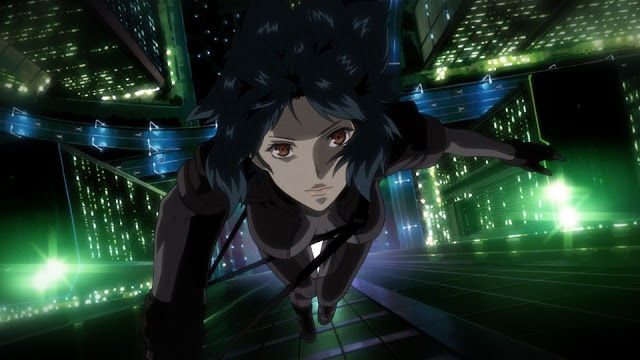 “We also hold a national theatrical showcase – ‘Reel Anime’ – for the best, most acclaimed or event anime features of that year. The titles are curated with the understanding that some them would work for the core audience, that some will be better offerings for families or a general cinema-going crowd, and some will be a completely new discovery. 2013 marks the first year we have run Reel Anime as an annual event, following on from Reel Anime 2012.

“In this new age of content streaming and unabated internet access, Australian audiences are also dialed in to what the absolute latest and greatest titles are, and they let us know about it too!”

CW: “In terms of ‘live-action’ cinema, our biggest-selling movie has been the all-time classic Japanese film: Seven Samurai. This film was quite groundbreaking at the time and gave birth to the modern action film, not just within Japan, but also to Western filmmaking. Its influence is still felt today which has caused the film quite timeless.” 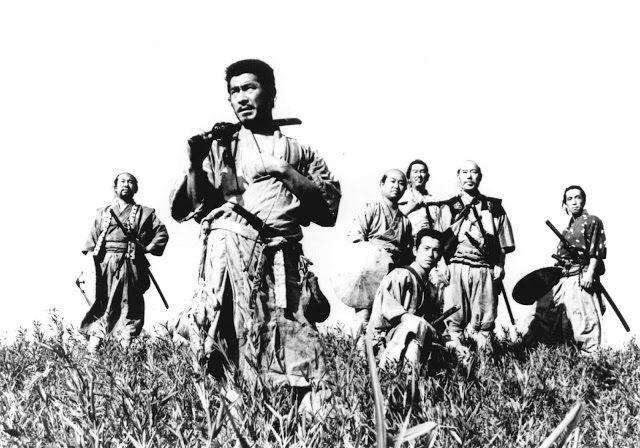 SI: “The Studio Ghibli catalogue would easily be near the top of the list, along with Dragon Ball/Dragon Ball Z (pretty much all series), and Naruto/Naruto Shippuden.”

What Japanese cinema is more difficult to move?

CW: “It can be said of all countries that comedy is the most difficult genre to successfully traverse the barrier of language. It’s always difficult to execute a clever joke across the timing of English subtitles and comedy also often employs cultural specific puns and jokes.”

Which Japanese directors seem to be best known in Australia?

CW: “The most ubiquitous name is certainly that of Akira Kurosawa. His breakthrough film Rashomon [1950] was so well-regarded that the first Foreign Film Oscar was created just for it. He gave us samurai films and helped inspired countless spaghetti westerns. The Hidden Fortress and Sanshiro Sugata even helped shape Star Wars.” 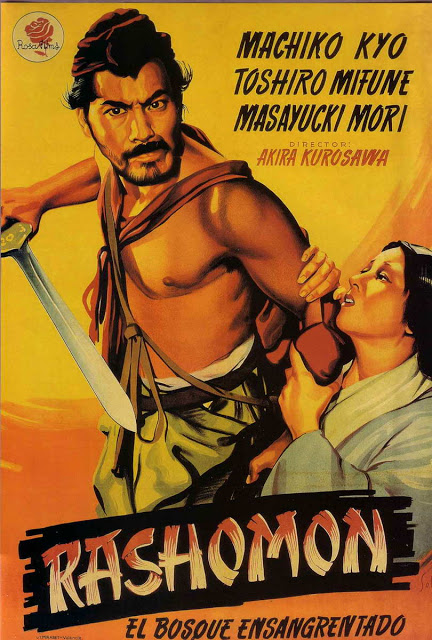 SI: “Hayao Miyazaki would be the most broadly known amongst both fans and the wider cinema-going public as an anime filmmaker. Followed then, to a lesser degree and mainly in fan circles, by the likes of Hideaki Anno (Evangelion), Katsuhiro Otomo (Akira), Mamoru Oshii (Ghost in the Shell), plus new talents Mamoru Hosoda (Wolf Children) and Makoto Shinkai (Children Who Chase Lost Voices).”

Why does Madman have such a strong focus on Japanese content?

SI: “We were built on it. Madman was born in the mid ’90s out of [managing director] Tim Anderson’s love of Japanese anime. I also believe that it’s due to the fact that we have built a good relationship with our fans and customers, because most of us are also fans and customers. We’re all just hungry for the content and we have, and will continue to explore the best that is available to us in order to help whet the appetite of these loyal and gracious fans.” 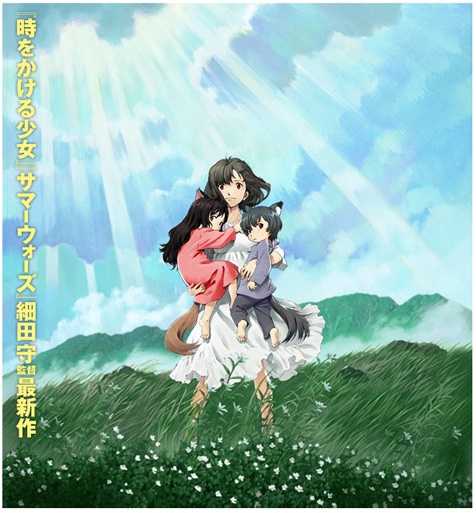 How long exactly has Madman been plugging away?

Any expansion ideas abroad or within Australia?

SI: “We see a future in digital distribution, which we have made great inroads into. We also have a New Zealand office, but I think our focus is to continue to acquire and release the very best in Japanese, cult and film content available for this territory.”

How do you think the Australian market is different from, say, the American one?

CW: “While a lot of Western countries, such as the USA, usually get a decent amount of cultural exposure to food, Australia has had the added benefit of being exposed to multicultural media over the past couple of decades through SBS Television.

I think this has made a lot of Australian much more used to the idea of reading subtitles than our American counterparts.” 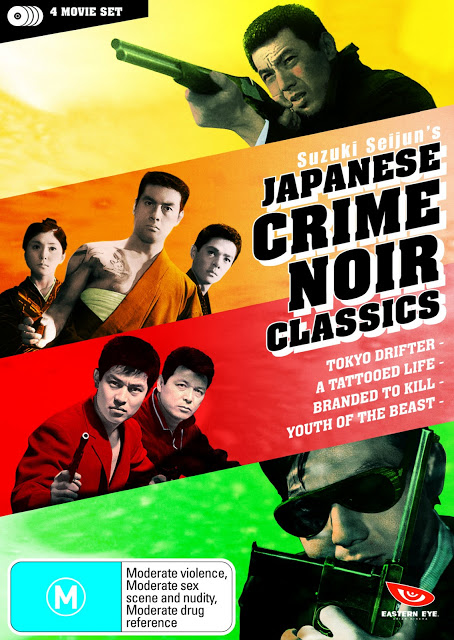 SI: “Where the American market has very much moved towards an online business model, with space for home video content in general shrinking in most stores, we are still very focused on the ‘walk in’ retail store experience – to be able to pick up the product physically, feel the weight and read packaging and take it to the counter for purchase. We’ve been able to maintain good relationships with our retail partners, continually providing a strong range of titles that people can easily access at reasonable prices.”

Why should people bother to check and/or buy Madman products?

CW: “We are always digging up what’s cool, new and interesting through a quality selection of movies and TV from around the world. You want something fresh, we will have something for you.”

SI: “We are one of the most socially-engaged companies out there. We are very active in receiving and noting feedback from our fans and customers and also going out to acquire the best titles available as soon as possible. We have also been able to establish ourselves as a brand that fans can trust to deliver on always being at the forefront of Japanese content and our company will continue to evolve with the market place in order to maintain these great expectations.”