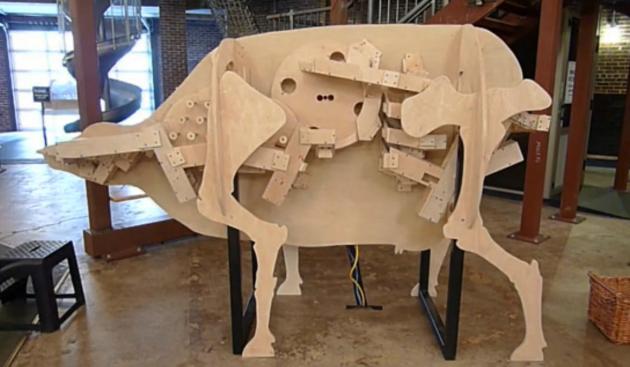 Since cows are weird and seemingly have no other purpose than to eat, crap and be tipped over by some drunk frat guy, I haven’t given the animal much thought, especially when it comes to their digestive system- which includes two stomachs and verping up their food and chewing on it (I know there’s more science-y words to describe the process like bolus and ruminant and reticulorumen but who wants to spend time defining them? Not me.)

But I suppose young kids would love to see a Rube Goldberg-like machine in the shape of a cow that illustrates the process via an orange ball that ultimately shoots out the wooden creatures’s ass and falls into a basket.

And you know something, I probably would like to watch it as well (mostly because I like seeing things shoot out of rectums…wait, that came out wrong).

Just watch the video below and try not to ruminate too much on what I just said.

Cow from Nova Jiang on Vimeo.

In this article:Animals, Awesome, Science/Nature, Watch This