For over a decade, Richard Griffin has been an extremely busy filmmaker, directing features and short films as well as being involved in virtually every single aspect of the moviemaking process.  Meanwhile, Guy Benoit’s talents have led him to concentrate on directing shorts and music videos as well as writing for both himself and others.

Now, like chocolate and peanut butter, the Griffin/Benoit pairing has led to something equally delicious, their new film, Exhumed, which arrives on DVD tomorrow from Wild Eye Releasing.

I spoke with the two renaissance men about their friendship, their work and their collaboration.

FOG!: Let’s start at the beginning, how’d you guys meet?

Guy Benoit: Back in the early-1990s, Providence, RI, was even smaller than it is, today.  If you were doing anything even remotely film-related, you were bound to cross paths, eventually.  I had directed a short flick called Crosley Fiver that had done well at festivals.  Richard was producing stuff constantly, and always had his name in the papers.  I believe we met for the absolute first time at that long-gone-but-never-forgotten Newspeak Bookstore on Richmond Street.  Those fine folks used to sponsor weekly discussion groups for people interested in weird flicks and other esoteric subjects.  Beautiful time to be alive.

Richard Griffin : Guy and I met, I believe, in the early to mid 90s. I knew of Guy’s amazing work directing short 16mm films, and I asked him to work on a couple of my projects as a director of photography. Guy introduced me to some really terrific, obscure movies and in many ways broadened my cinematic horizons. We had pretty much lost touch when Guy moved to Los Angeles, but in 2010 we had a chance meeting at a Thai restaurant in Providence. I asked him to do a re-write of the Atomic Brian Invasion screenplay and the rest is history. 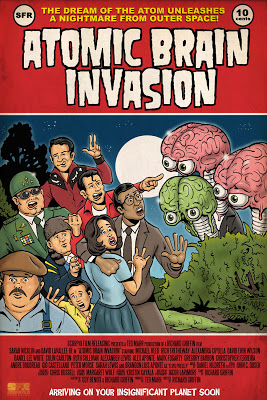 As collaborators, your first project was Atomic Brian Invasion. How did you wind up working together and what was the experience like?

RG: The collaboration was just delightful.

I had written a rather R-rated screenplay called Space Cheerleaders back in 2005, and it had been sitting on my hard drive gathering dust.

I sent it to Guy, and we would take these mammoth walks and chat about the changes we both wanted to make. Then I pretty much let Guy do a page one re-write on it, and it was brilliant.

I would always look forward to getting his pages in my e-mail.

Guy brought a lot of heart and soul — as well as toning it down to a PG rated film… our first ever!

GB: Well, our first collaboration actually happened back in, like, 1993 or so.

I worked as a lighting grip on a project Richard was directing about a painter who was losing his mind.  After that, we helped each other out for another 3-4 years or so.  Moving forward a few decades, I ran into Richard at The Gourmet House on Hope Street.

We hadn’t seen in each other in many years.  We got to talking and, by the end of the week, we were working on Atomic Brain Invasion.  Without getting into too much detail, I credit Richard with getting me out of a bad slump.

What was the genesis of Exhumed?

RG: Exhumed was the seed of a idea I had back around 2009. I had tried to get it off the ground a few times, and even had a couple of writers take a whack at it. But it wasn’t until Guy came aboard that it really came to fruition. The idea I had for it was more of a plotless mood piece, which dealt with separation, death and loss. Almost a dark fairy tale.

RG: I had written a pretty thin outline for Guy to use, but at the end of the day, it’s his screenplay. My strengths as a writer is story and structure, Guy’s is character and dialogue… so we make a very good pair when it comes to collaborating.

RG: Man, I’ll let Guy answer that one! It’s a tricky movie to sum up quickly.

GB: How people can justify any kind of behavior.  How evil manifests itself in the trivial.

Can you talk about the collaborative process with one another? As friends do you find it difficult if one of you isn’t in sync creatively?

RG: Guy and I have now worked on two projects together — and hopefully a web series called Planet of the Gorilla Suit which I would like to shoot this year. And I always find it to be a joy to work with him. I don’t think we had any conflicts when it came to either project. In the case of Atomic Brain Invasion we had the dreaded “Third Act Problem”, but after a few long coffee and chat sessions at our nearby Starbucks, we worked them out beautifully.

GB: Richard usually generates the overarching idea and plot, as well as the intended mood;  I tend to fill in the details, the character and the dialogue.  Richard and I like to do ‘Opposite Day’ when we collaborate:  when events or ideas in the script aren’t working, we’ll write the most counterintuitive thing we can imagine.  It always works.  I’ve applied this practice to other projects.

What is your next project?

GB: Getting my documentary on Otto d’Ambrosio onto the asphalt.  It’s finished… now we have to put it into the eyeline of the public.  Also, writing another horror movie.

RG: Hopefully the web series Planet of the Gorilla Suit, a loving homage to the cliffhanger movie serials of the 30s and 40s.

Any plans to work together again?

RG: I would love to!

RG: I’m thrilled a lot of classic films are being restored and put on Blu-ray. Even the really esoteric stuff I love, like Jess Franco and Jean Rollin, is all coming out.

As far as movies go, I finally got to see Nelson Lyon’s The Telephone Book, which I’ve wanted to watch since around 1985.  I am obsessed with Michael O’Donoghue, which is how I heard about that one.

Other recent and worthwhile viewings have included Children of Men, Down With Love, Robert Altman’s The Company, The Brotherhood Of Satan, starring Strother Martin, and a great documentary called Heavy Petting, which has been a fave since I saw it in college.

As far as reading goes, let’s hear it for Cornell Woolrich. 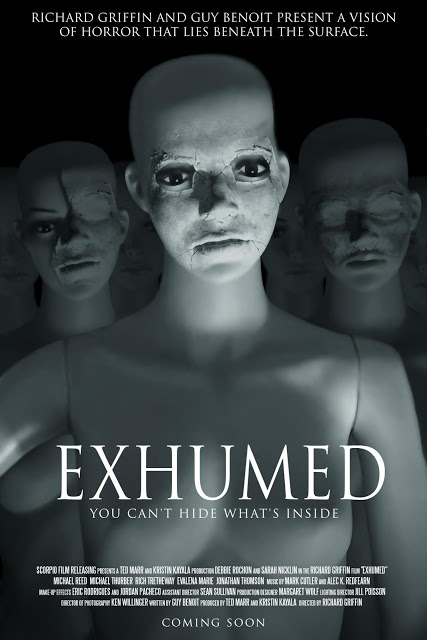 Wild Eye Releasing will release Exhumed on DVD on June 18th with extras including: