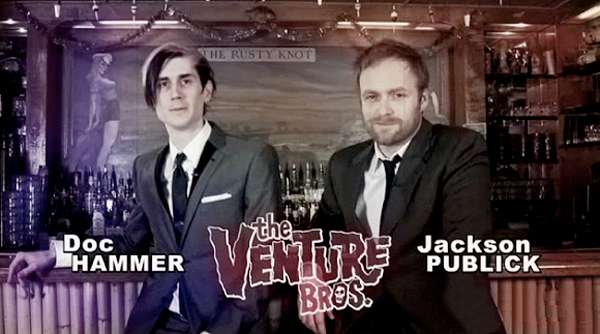 The Venture Brothers is one of those shows that you would think would be discussed at length on the Senate floor during an “Obscenity in Cartoon” hearing by pastel-clad Senator’s wives whose children have grown up and moved out of the house and who have found themselves feeling lost without the constant role of “Mother”, so naturally, they see themselves as crusaders of decency (I guess that residual Tipper Gore/parental advisory music fiasco from the 80’s still lingers a bit in my craw). But no, I have rarely heard any outcry by parental or political groups when it comes to a show that has cartoon nip slips, a pedophile bodyguard and an arch nemesis that kinda hates himself (The Monarch) and for that, I am eternally grateful.

And now that The Venture Brothers begins it’s fifth season on Adult Swim (which seems incredible), FOG! takes some time to chat with show creators Jackson Publick and Doc Hammer about the characters, what’s it like to have a show that’s a half-decade old and of course, David Bowie.

FOG!: I have to admit, as much as I love The Venture Brothers, I’m constantly amazed that it gets renewed due to its insane content (seriously, a pedophile bodyguard who controls his impulses through Nomlestol?) Are you surprised it has lasted this long?

JACKSON:
Kinda, yeah? Not because of pedophiles or insanity, but because we’ve always been kind of a fringe show with a cult following. And because we caught some flack from the network in the first and second season for being a bit “too geeky.” But geek culture took over mainstream culture over the last decade, so I think that’s had a little to do with our still being here. Honestly, I’m a little surprised we had four seasons’ worth of ideas and enthusiasm in us, much less five seasons’ worth.

DOC:
It’s true, we have a recovered pedophile and a bodyguard, and yeah, we don’t get much flack for it. I think that’s because we don’t use it as exploitation or just a big joke. The guy is an ex Villain. His crimes are ugly. We write him as a guy with a terrible problem that he is ashamed of and makes sure that he doesn’t act upon. Like you said, the guy takes medication to NOT do that stuff. This kinda thing happens. There are pedophiles. The universe makes these things. Wouldn’t it be great if we didn’t ignore it, and helped them not hurt anybody? There is an evil in Sgt. Hatred’s heart, but be refuses to let it out. There’s a beauty to that, ya know?

FOG!: Season 4’s finale (Operation P.R.O.M) was probably the series’ finest episode and the extra-long show made it possible to really get into the characters’ heartbreaks (Trianna and Dean, #21 and #24, to name a few) Is there a possibility of doing more 46 minute shows in the future that allows the audience to see more of the character’s storylines? 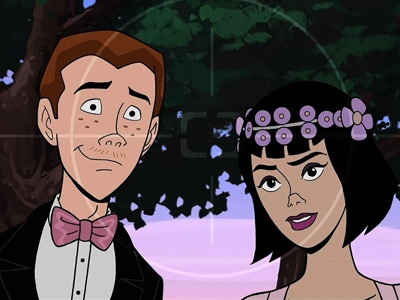 JACKSON:
Not just a possibility, but an inevitability, as our season 5 premiere is one of those 46 minute shows you describe. And yeah, we’ll probably write another or two of those in the future.

FOG!: The fifth season is sort of the Holy Grail in television, do you see this as an opportunity to really kick things up a notch?

JACKSON:
Definitely, where the production/animation is concerned. We’re always out to make the show look and sound as good as we possibly can, and we learn new stuff–do’s and don’t’s–every season just by making it. As far as our writing, I think we kind of see every season as an opportunity–or an obligation–to kick things up a notch. Or at least kick things laterally into unexplored notches that interest us and keep us interested and engaged.

DOC:
Exactly. Every time we make a show we try to do our best. Sometimes our best connects with people, and sometimes it just doesn’t. But we didn’t coast through four seasons and then went “Finally! They’ve accepted our mediocrity. Now we can really begin the writing!” I mean, it’s been one long season in our head. If not one long episode.

FOG!: Has the extra-long hiatus made coming back more challenging?

JACKSON:
Not at all. It’s just made me more impatient to see it on the air, but this season was a joy to write, and it was the least difficult to produce of the entire series.

DOC:
In the time that the Venture Bros. is not on the air, we’ve been making more of them. There’s no hiatus for us. The only break we perceive is that people haven’t heard our latest ideas. And that isn’t challenging for us. Like Jackson said, it just makes us really want people to see what we’ve done.

FOG!: Does the audience’s affinity for specific characters ever surprise you?

JACKSON:
Not so much, now that the fan requests to “bring back Kim” (Triana’s pink-haired friend from like one and a half episodes) have subsided. 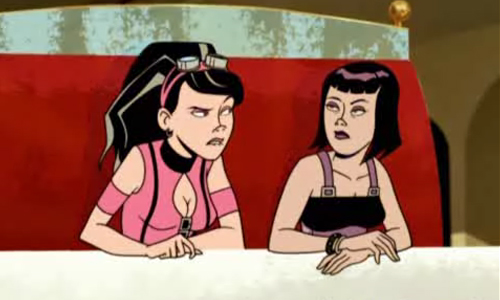 DOC:
We’ve a million fully fleshed out characters. It’s almost like we are begging for people to embrace these little guys we throw out there. It surprises me more that some people just care about the core cast than it does that they fall for the “little guys.” Ya know?

FOG!: Without feeling like you are giving anything away, in vague terms what does the future hold for the characters, and, more importantly, do Hank and Dean attend Home College?

FOG!:Finally, do you think that The Venture Brothers influenced the real life David Bowie to come out retirement? I mean, it seems a little suspicious that his new album (The Next Day) would drop mere months before Season 5 begins…coincidence? 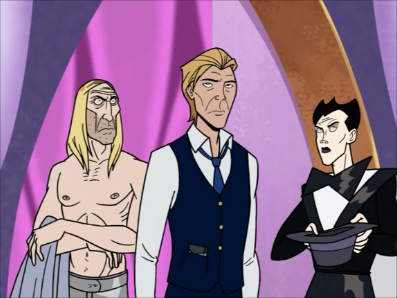 JACKSON:
If we had anything at all to do with anything Bowie’s done this year, it could only be because Bowie planned it that way all along, and guided us with his invisible hand.

The Venture Bros. airs Sundays at Midnight on Adult Swim.