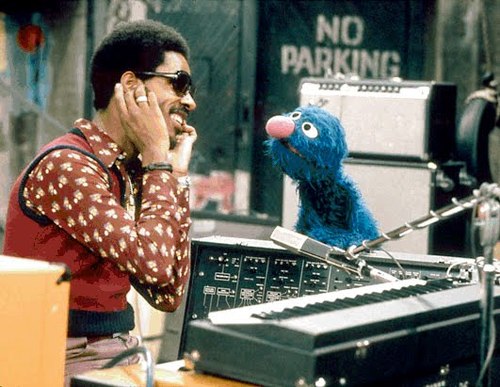 I was born in the early 70’s so Sesame Street (which had only been on the air for a few years then) was a huge influence on me. And, in those early years, the show was a little more, well funky, than what had usually been seen on children’s television (I mean they had the cast of Star Fucking Wars on it, for Pete’s Sake).

But to get a little more specific about why Sesame Street was way cooler in the 70’s than pretty much anything offered today, it had to be the musical guests, which not only made it barable for mom and dad to sit with me as a toddler, but introduced a wee little human to the sounds of Johnny Cash, Paul Simon, Lena Horne and, my personal favorite, Stevie Wonder, whose song Superstition made not only made me shake my diapered butt, but also all the kids on the show.

Yeah, Stevie Wonder performed Superstition on a kid’s show as if he were performing at a regular gig.

So watch the video after the break and then take a moment to think about what it would be like to to hear that song when you were still being formed as a human being.

It was all downhill after that, I’ll tell you.

And here’s Stevie teaching grover a thing or two about scat…and no, I’m not talking about poo.