If you really want to appreciate classic sci-fi films, you can’t just watch the feature films; you need to watch the serials.  The episodic rhythm of a sci-fi serial is a little like that of a TV show or a comic book, but there’s something larger and more urgent about it, something from knowing that it would be complete in 12 or 15 episodes, something from watching it with friends and companions in a theater on a big screen.

For us fans living in the 21st century, watching classic serials is a highly unusual experience.

Below, I’d like to offer very brief history of science fiction serials, then some suggestions for how to watch them, then a list of seven greats for your viewing pleasure.  Watching serials isn’t easy for us, but it can be fantastic fun – if you know how to do it.

Not counting some adventure serials with brief sci-fi elements, the first real sci-fi serial was THE PHANTOM EMPIRE (1935).  Half of it was a Western, but the sci-fi half inspired FLASH GORDON: SPACE SOLDIERS (1936) which in turn initiated the Golden Age of Serials, 1936-1945.

After 1945, serials of decreasing quality continued to appear through 1953, when television finally took over.  Adventure serials, Western serials, spy/police serials, and even comic superhero serials were all more numerous than sci-fi serials.

But several sci-fi serials rank among the best serials ever made.

We should note that many serials include brief sci-fi elements (one or two weapons or devices).  But listed below are all serials (17 total) where science fiction rises to the fore:

Now here are some suggestions for watching:

It will be difficult to resist watching one episode after the next, marathon-style, if only because so many cliffhangers are so exciting.  Most episodes run 20 minutes or less, so it’s tempting to knock off three episodes in an hour. 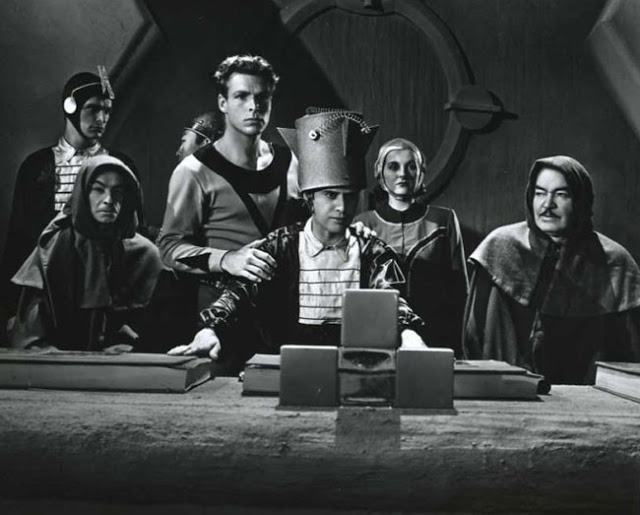 But you must try to take your time.  Good serials are designed to build a cumulative effect.  If you watch too many episodes at once, you will forget what you’ve seen.  When you watch, at least stretch out the episodes over a week (which means about 2 episodes per day).

In the future, thinking back, you’ll find that the serial you watched has actually defined that week of your life.

TV shows and comic books also use cliffhanger endings, but serials introduced the cliffhanger concept and brought it to its fullest.  Try to guess the cliffhangers: how will our heroes and heroines escape?  Some are easy to guess, many are hard, and a few are ingeniously impossible. 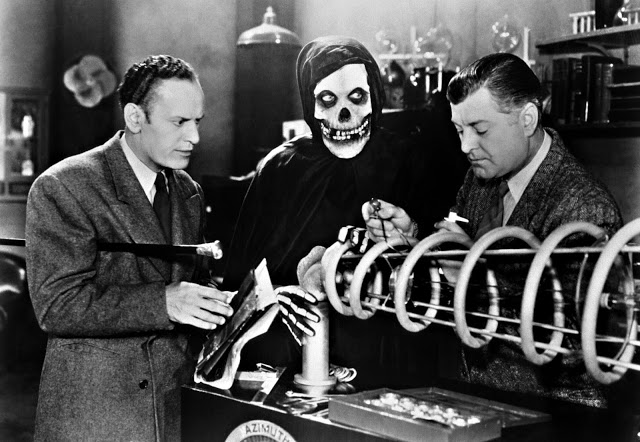 The most famous cliffhanger cliche, adapted from Western serials, is when a vehicle (car, truck, carriage, stagecoach) flies off a cliff… but then in the next episode you find that the good guys jumped out right before the thing went over.

Not only are many serials alike, many episodes are alike within a serial.  This helps each episode stand on its own, like a TV show episode or comic book issue. 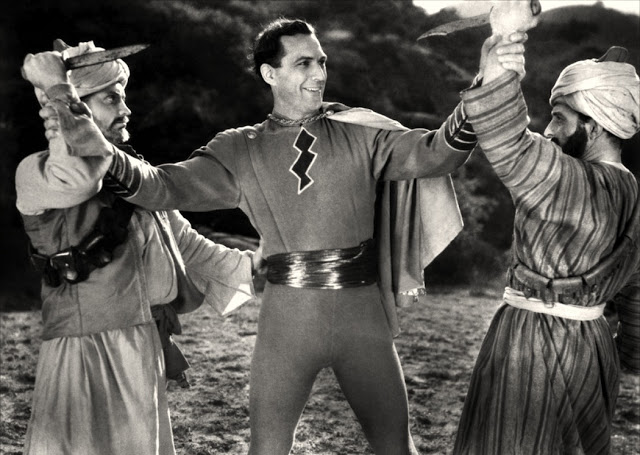 Action and adventure serials almost always include a chase scene and a fistfight in every episode.  Sci-fi serial episodes usually include a new monster, a new gadget, a spaceship flight, or a mineral/element/science discovery.

Unlike TV or comic books which kids usually enjoyed alone at home, serials were a group experience, in theaters, with your buddies, your cousins, even your enemies sitting around you and having a blast. 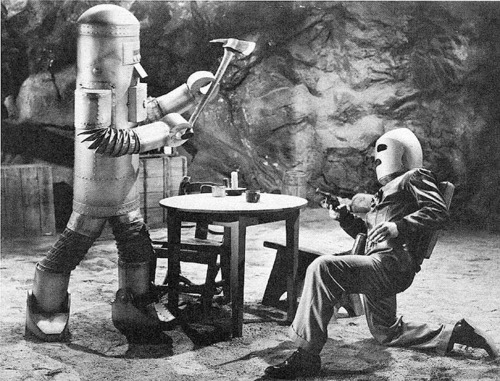 Imagine boys and girls, nine or ten or eleven years old, breathlessly awaiting a show to begin, chomping on popcorn and candy, gabbing about their favorite characters, their favorite devices, their favorite cliffhangers, and everything else.  Imagine this on a Saturday afternoon, in an air-conditioned theater in the heat of the summer, and not a grownup in sight.

Now for my picks for the top seven.  I’ve written more about each of them in my Claws & Saucers guidebook, but I hope you’ll enjoy the comments and links here. 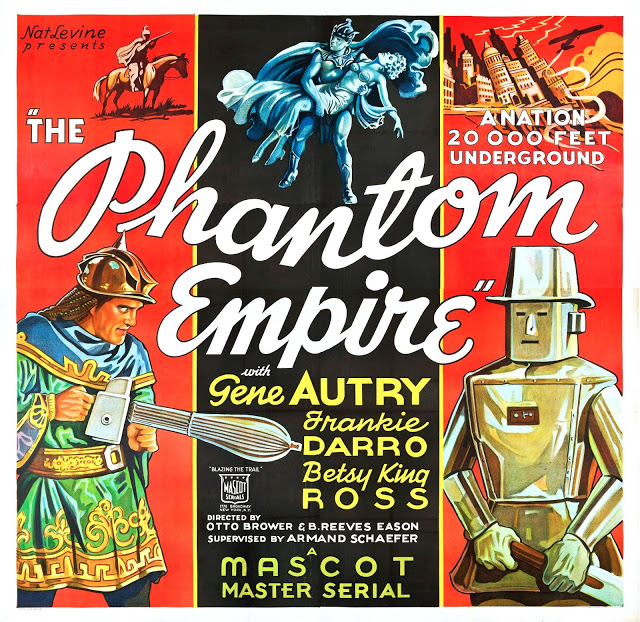 This strange and almost surreal sci-fi/Western combo features Gene Autry the singing cowboy playing himself, as he discovers a vast lost world of “Muraneans” plotting to take over the surface world.  Where does Autry discover this lost civilization?  Right underneath his California ranch!  This is also one of the few serials that girls will enjoy as much as boys. 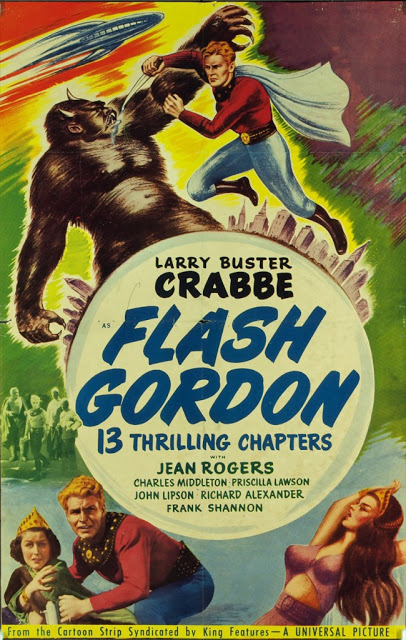 After the success of Mascot’s PHANTOM EMPIRE, Universal gave a huge budget to FLASH GORDON.  The result was a grand thrilling spectacle that remains the most popular and influential serial ever made.  It’s crazy, silly, sexy, and surprising.  Buster Crabbe’s sincere, energetic, and physically powerful Flash Gordon is the perfect counterpoint to Charles Middleton’s scheming, understated, emaciated Ming the Merciless.  I recommend the two sequels below. 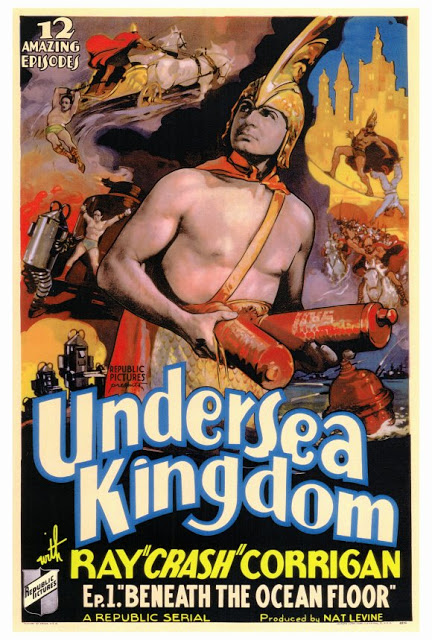 As Universal followed Mascot, Republic followed Universal.  The plot is obviously a FLASH GORDON rehash, as a star athlete gets whisked off on a nutty adventure in a strange land.  It has many excellent battle scenes, some featuring Lon Chaney Jr. as an evil guard captain.  One of the good-looking robots was re-used for MYSTERIOUS DOCTOR SATAN a few years later.  The main flaw is the star, Ray “Crash” Corrigan, who looks good but lacks personality. 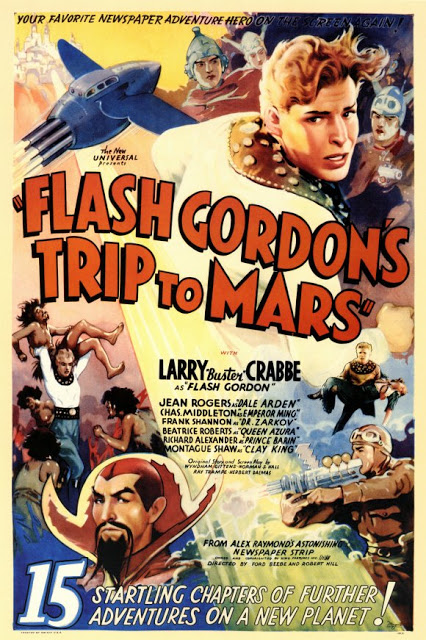 Less sexy than the first serial, with more emphasis on action, TRIP TO MARS is more episodic and meandering, but almost as great as SPACE SOLDIERS.  After this one, Buster Crabbe made BUCK ROGERS (1939), but it’s more realistic and sedate, and not as exciting as any of the Flash Gordon serials. 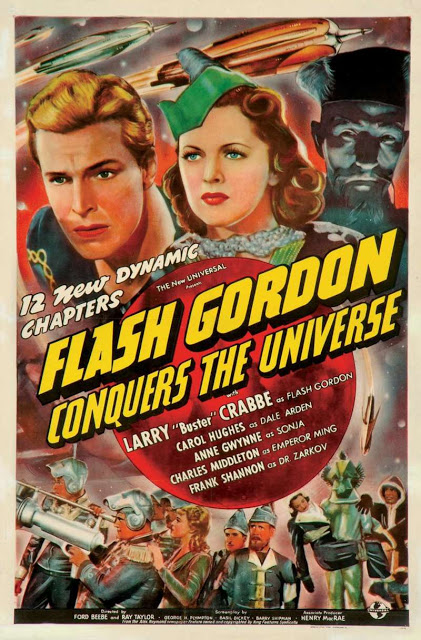 With this final Flash Gordon serial, you’ll meet forest-dwelling Arborians (inspired obviously by Errol Flynn’s ROBIN HOOD), and sexy Queen Fria from the ice planet Frigea.  Yes, the sex quotient has returned.  You’ll get weird exploding robots, too.  At last Flash defeats Ming for good, and you – and even he – might feel a little sad. 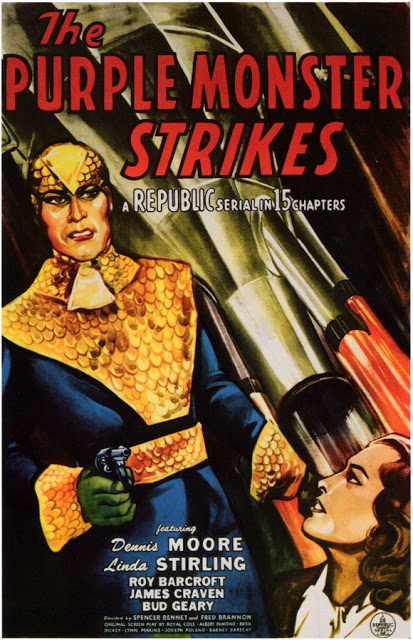 The titular “monster” is a tough and ruthless Martian agent sent to Earth to prepare a Martian invasion.  The story plays out like a spy serial, with the hero and thugs thwarting each other little by little, seeking parts for one machine or another.  Great fistfights – the ones Republic stuntmen became famous for – come in every episode.  But the sci-fi devices, like the Electro-Annihilator, are essential.  If the Golden Age of Serials was 1936-1945, then this is the last serial of that age. 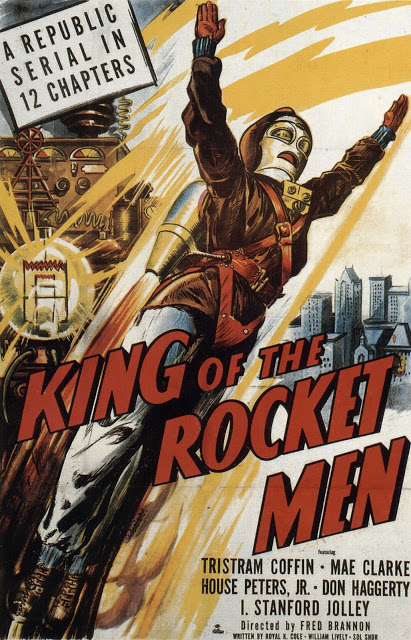 Although ROCKET MEN inspired several sequels, none of the sequels was close to the original in quality and excitement.  ROCKET MEN itself was a quasi-remake of CRIMSON GHOST (1946), but it’s 10 times better.  Unlike other serials that meander and “noodle” in the middle episodes, ROCKET MEN remains focused from start to finish, with mounting excitement that leads to an epic climax.  It is the last great sci-fi serial – and the last great serial of any kind – ever made.