Ah, the family vacation. Once a year mom and dad gather the children, pack the family truckster, and set off for a child-friendly destination.

Even as I write this, I fondly remember my family gleefully getting together for our annual road trip to Crater Lake for fun, fishing and the best damn beef jerky on the west coast.

Only in Dr. Venture’s case, he replaces the children with his large-bosomed male bodyguard Sgt. Hatred and college buddies Billy Quiz Boy and Pete White; the station wagon with the nuclear powered X-1 supersonic aircraft; and the child-friendly destination with an exotic Greek island that celebrates a holiday known only to the Ventures. 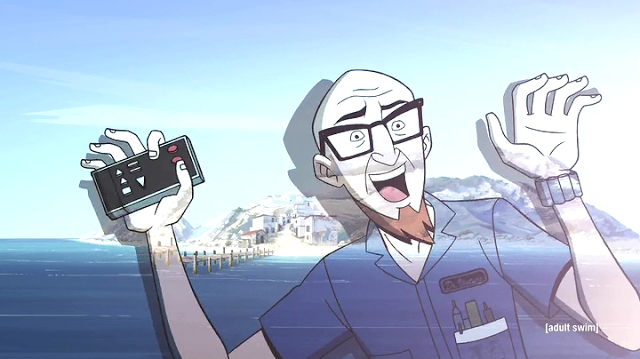 And without further ado, let me introduce you all to “Spanakopita.”

We open in the swinging ‘60s; well, 1968 to be exact. The original Team Venture (Dr. Jonas Venture Sr., Colonel Gentleman, The Action Man, and Kano) are enjoying a relaxing vacation off the coast of Greece in the X-2. As usual, we see the adults leave behind little Rusty Venture to his lonesome in order to attend the wedding of Jacqueline Kennedy and Aristotle Onassis. 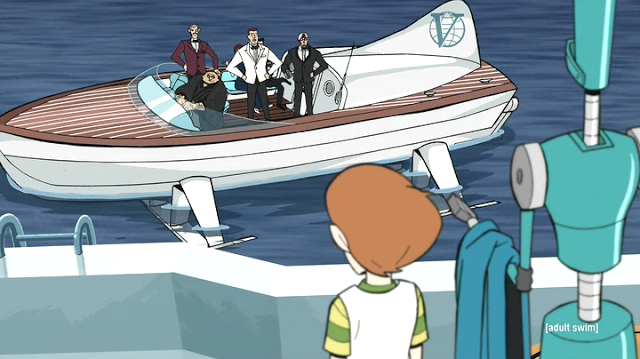 Back to present day, an unusually peppy Dr. Venture explains that Spanakopita is a Venture family tradition. But seeing as how Hank is busy with his band and Dean is well, being Dean, Dr. Venture is extending an invitation to Billy Quiz Boy and Pete White. Pete, being albino, could see nothing worse than spending time on a blazing beach in the Greek isles but reluctantly decides to go after some convincing from Billy. 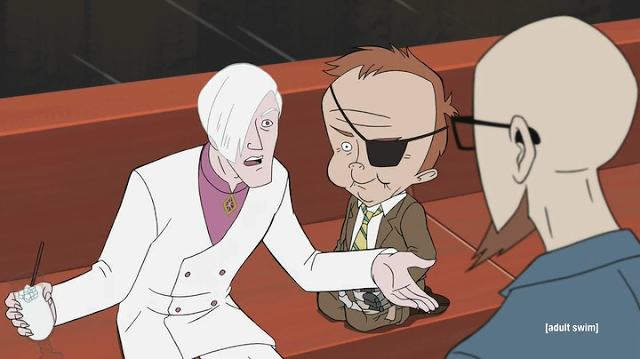 Once there, Sgt. Hatred immediately finds something amiss. None of the team but Dr. Venture ever heard of Spanakopita and when Hatred inquires about the holiday from the village leader Giorgos, he seems to brush it off with the joyous cry of “Spanakopita!” Also, unbeknownst to the team, everyone’s favorite robot owl Bubo, forged by Pat Roach himself, spies on their arrival from a hidden perch. 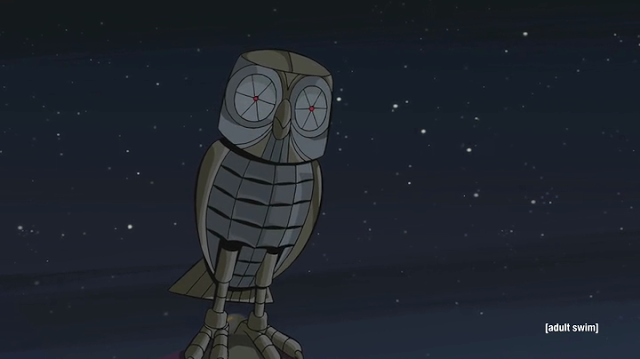 When Dr. Venture finds the X-2 in port and learns his hotel room is taken, he immediately assumes his brother, Jonas Jr., is there to ruin his vacation. Yet the truth is actually much worse and not for Dr. Venture. The real man behind Bubo (god I hate that thing) and the X-2 is none other than Billy Quiz Boy’s arch nemesis and collector of all that is pop culture, Augustus St. Cloud. 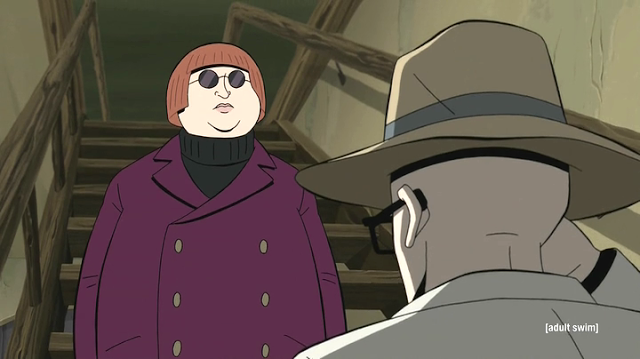 But that really doesn’t seem to matter much to Dr. Venture – he’s still having the time of his life preparing to compete in the various “Spanakopita games” that include “running of the goats,” “pumice carving,” and “sponge diving.” The winner of a Spanakopita game gets a bag of Greek drachma and the one with the most drachmas at the end wins the Spanakopita crown. St. Cloud is very interested in winning this crown, so interested he approaches Dr. Venture with a wager: if he wins, Venture hands over the X-1 and if Venture wins, St. Cloud will hand over a million dollars. In the spirit of competition, Dr. Venture employs Billy and Pete to stop St. Cloud. Venture would do it himself but, hey, St. Cloud is still his biggest buyer and he still needs the multi-millionaire’s cash.

Hatred is still unconvinced that the village is simply putting on a festival. Maybe it’s all the sneaking around the villagers are doing; maybe it’s the fact that even Giorgos never seems to give Hatred a straight answer about the holiday; or maybe it’s the welcoming party that includes tying Dr. Venture to a chair, blindfolding him and lifting him above their heads while chanting “Spanakopita.”

Regardless, Hatred calls the only other guy who may know what’s going on: Brock Samson. As Hatred voices his concerns, Brock cuts him off and tells the new bodyguard he already went down that road. Brock sternly tells Hatred to drop his inquiries and allow Dr. Venture to have a great time. Hatred is suddenly surrounded by a number of mothers and their young Greek sons (who suspiciously sport blond, curly mullets), spooking the “Swedish Murder Machine” into quickly ending the transmission. 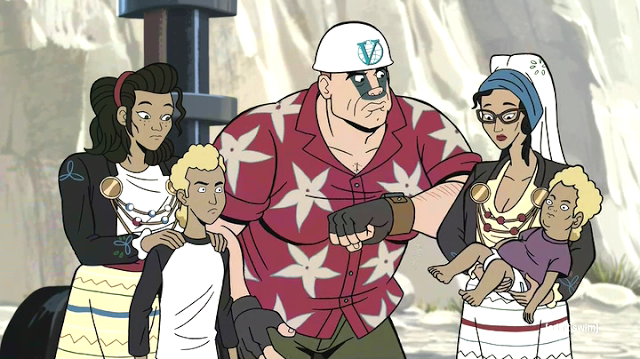 It was during a Clash of the Titans-themed dream when Billy gets an idea on how to stop St. Cloud. Billy and Pete need to infiltrate the X-2 in order to steal St. Cloud’s cash because without cash St. Cloud won’t be able to bribe the villagers. Not surprisingly the two are caught by St. Cloud, his silent right hand (the Asian albino “Pee Wyy”) and that freaky robot clown from FX 2. 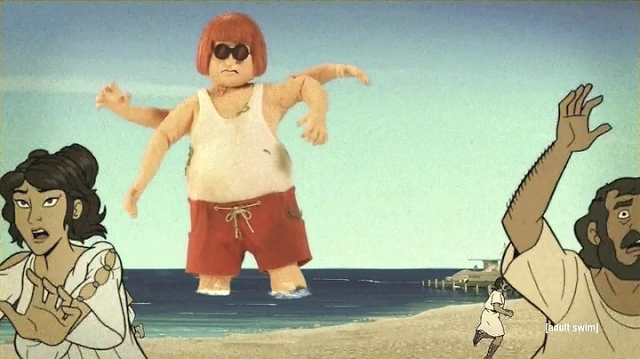 In 1968 the country of Greece was going through tremulous times, leaving Giorgos and his fellow villagers destitute. It’s there that the village came up with the idea of boarding all the wealthy ships moored for the Kennedy/Onassis wedding and looting their riches. The villagers came upon the X-2 and swiped a chest they assumed held valuables. What they didn’t realize until they got home was Rusty Venture was hiding in the chest because he was playing “Trojan Horse.” 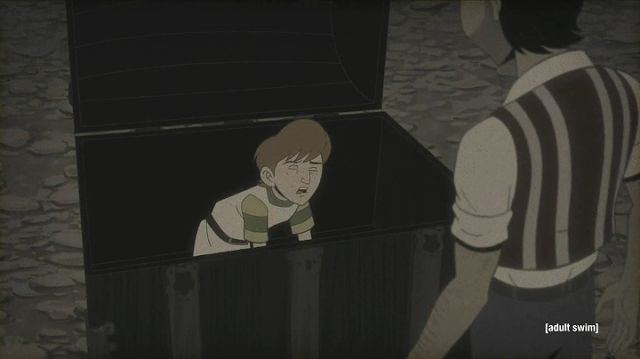 The village had no idea what to do. They couldn’t get a hold of Jonas Venture Sr. because he and the rest of Team Venture were deeply embroiled in a lengthy battle with robot L. Ron Hubbard. Rusty, as usual, felt abandoned by his adventurer father and fell into deep dismay. So the villagers invented Spanakopita, all of the games and entertainment where created simply to raise the lonely little boy’s spirits. Unbeknownst to the villagers, Spanakopita ended up being the happiest moment in Dr. Venture’s sad childhood. Dr. Venture would return later as an adult and make Spanakopita a yearly event. It was a win-win; Spanakopita delighted Dr. Venture to no end and it gave the small village a much needed annual injection of cash. 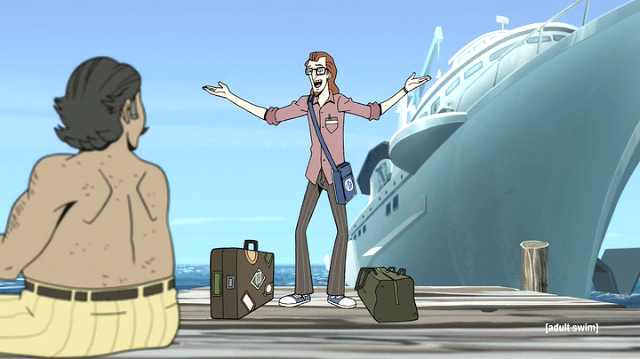 Pete and Billy finally wake up to find they are tightly bound to the ground with the threat of the rising sun creeping towards Pete’s pale, delicate skin. As the two try to figure out a plan of escape they are aided by an unlikely source: Pee Wyy. Billy wonders why Pee Wyy helped and Pete explains that it’s the “Albino code;” something stronger than even Pee Wyy’s allegiance to St. Cloud. 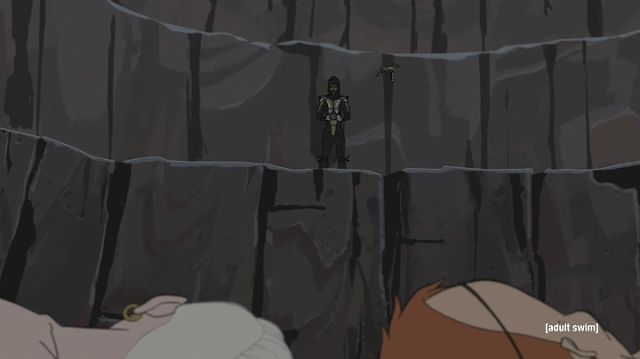 Billy and Pete make it back to the village with St. Cloud’s entire pot of drachma for the Spanakopita crown. Dr. Venture, victorious, suddenly realizes that he may have completely burned his relationship with St. Cloud. St. Cloud, burned by the outcome, states that he will simply buy the island out of spite. When Giorgos notices Dr. Venture saddened that his favorite holiday spot may be ruined, he tries to reassure his favorite little captive with some indecipherable Greek saying.

Hatred catches on to Giorgos and lays it out more simply: all St. Cloud really bought was a “couple million bucks worth of spinach humble pie.” 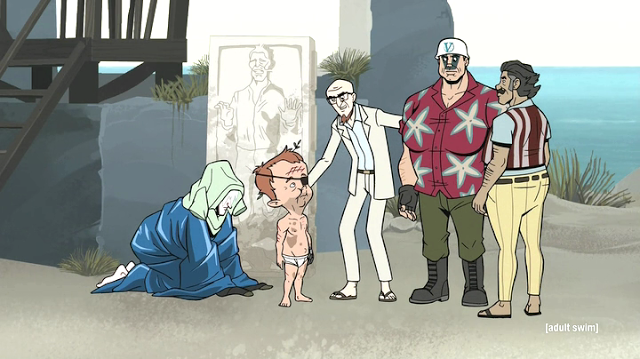 This episode worked pretty well for me. The idea that the only time Dr. Venture didn’t fear for his life on some horribly dangerous adventure was purely an accident is pretty clever because, in a way, most great trips happen because of a fortunate mistake. The one thing that bumped for me was that this episode didn’t really move the overall season arc I’ve come to enjoy over the past three episodes; this was really a standalone episode that gave us a glimpse into Dr. Venture’s life.

However, I continue to enjoy the character development of Sgt. Hatred and Billy Quiz Boy. Billy is moving towards something special as an adventurer and Hatred is quickly shaping into something I never would have guessed: a much better fit as the Venture’s bodyguard than Samson ever was. 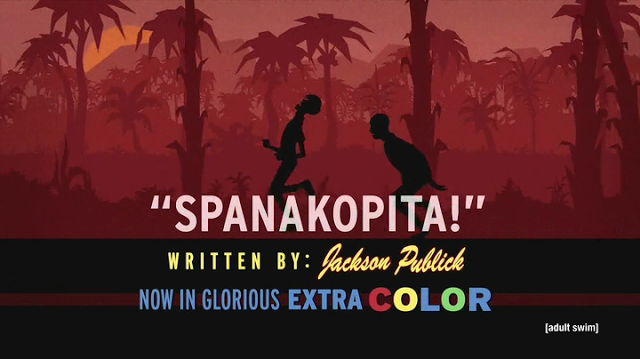 As always, until next week and GO TEAM VENTURE!