Howdy everyone in Forces of Geek land!

It’s your old pal Charlie, ready to give you another heaping helping of Venture Brothers goodness. 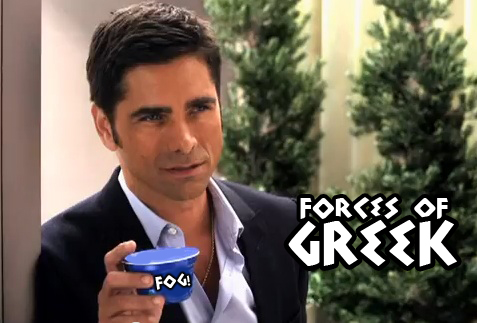 Tonight’s episode was a real treat in particular for anyone who’s ever watched G.I. Joe as a kid (which, admittedly, is probably 99% of our readership – the last 1% being an accidental redirect for the “Forces of Greek” webpage; a fantastic yogurt spot in Hollywood that John Stamos highly recommends).

The episode opens with Henchman 21 decked out in his Sphinx uniform, ready to lay a beat down on a supervillain group called “Long Division.” Using his Sphinx issued jetpack, he infiltrates the back of an 18-wheeler’s trailer and accidently ruins an undercover operation that Brock Samson and Shore Leave have been working on for months. 21 gets a tongue lashing by the two OSI agents and his crossbow is confiscated by Brock. 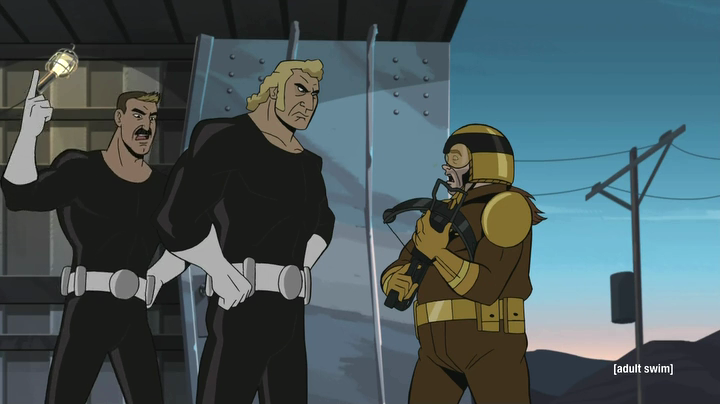 Later at the Venture compound, 21 and Sgt. Hatred foil The Monarch’s plan of attacking Dr. Venture with “acid magnets.” 21 and Hatred have really started to grow into a fantastic team, 21 trying to turn his life around and Hatred really doing his best to be the Venture’s bodyguard. Yet, Hatred still doubts 21 is a good guy and 21 resents that and ex-villain won’t give him a chance so the two can trade barbs with the best of them.

After their plan is ruined, The Monarch and Dr. Mrs. The Monarch devise a new scheme; using state-of-the-art false faces, they will infiltrate the Venture compound and plant explosives in the lower levels. It’s here that we learn a little tidbit about The Monarch: he has no clothes other than his costume, a bath robe and novelty t-shirts from his bachelor party. 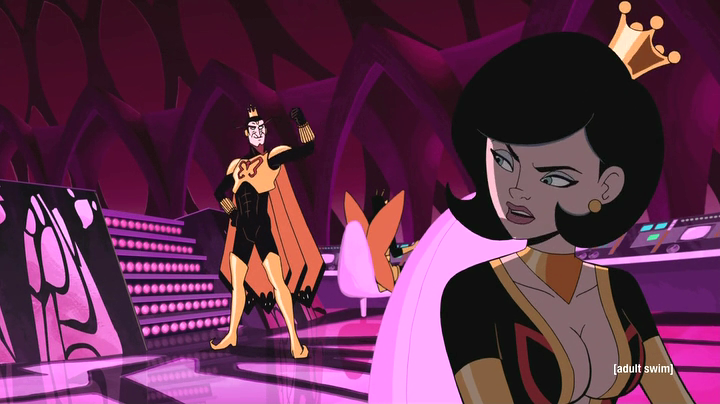 Henchman 21, now going by his alter ego “Viceroy,” is trying to recruit ex-henchmen for Sphinx through an embarrassingly long and semi-clear Craigslist ad. He ends up getting contacted by three new Sphinx prospects: Wind Song (hilariously voiced by Tim Meadows), Diamond Backdraft, The Commander (a cross between Cobra Commander and that 50-year-old dude that drives a Trans Am and can’t get over his ex-girlfriend) and Hank Venture (taking the ridiculous codename “Destiny”).

Meanwhile, Hunter Gathers is ramping up OSI’s assault on The Guild of Calamitous Intent with a speech to the new recruits in the massive Hoverquarters. I think this may be the start of something big; we may finally see an end-all fight between the two organizations that’s been building for some time.

Dr. Mrs. The Monarch and The Monarch gain access to the Venture compound through Dr. Venture by playing on the Monarch’s “Beaver Inspector” t-shirt. 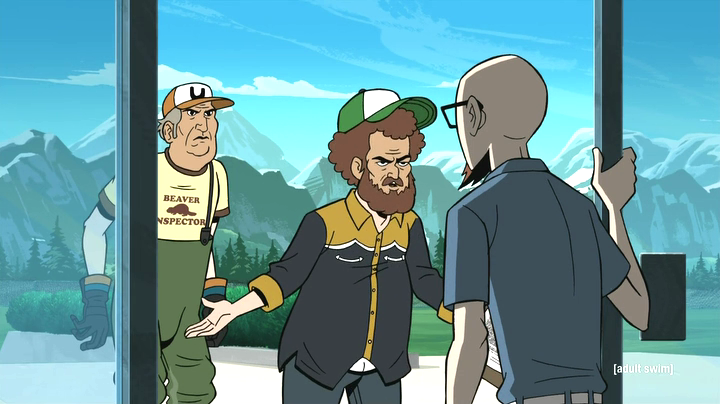 In Sphinx HQ, the four new recruits gather costumes and weapons that were undiscovered by 21, including a female-fitted strength suit that Hank claims only exacerbating the odd combination of Hank’s voice, sexy female armor and the name “Destiny.”

On the Hoverquarters, Hunter gives Samson and Shore Leave a stern talking-to about “Gary” (Henchman 21’s real name). 21 really pissed off Hunter by screwing up the mission with Long Division, so Hunter wants the two agents to take off the kid gloves and finally end Sphinx. 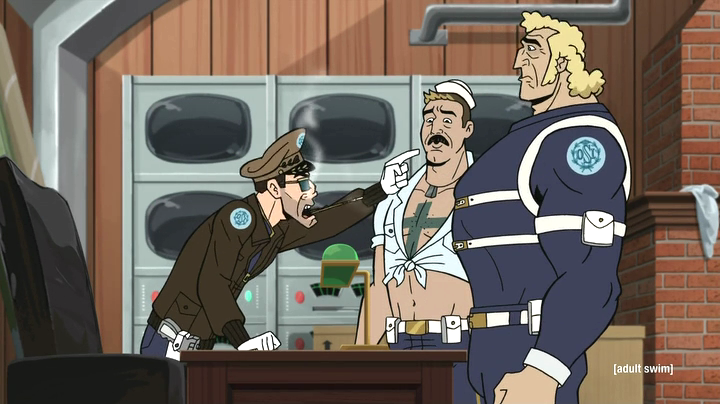 Sgt. Hatred has a nice heart-to-heart with Dean back at the Venture compound and admits his doubt he’s good enough to be their bodyguard. In turn, Dean discusses his problems trying to find a place in the world. This was actually a sweet little beat where Hatred does something that Samson never could: connect with one of the boys as a friend.

Piloted by the new team, the Sphinx aircraft finally takes off for their first mission. However, unbeknownst to 21 The Commander, Wind Song and Diamond Backdraft were the original members of Sphinx when it was a supervillainous organization. The Commander quickly usurps control and imprisons 21 and Hank.

In the brig, Wind Song reveals that all the early agents of Sphinx have a cyanide chip implanted in their brains for maximum loyalty. 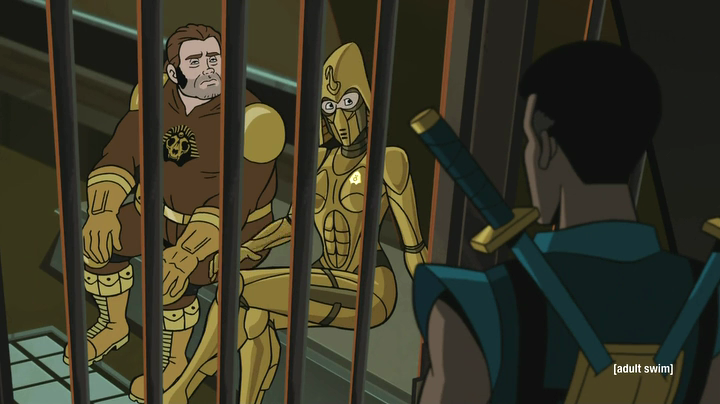 Since they cannot be removed and chips automatically kill them after they expire in less than a year, the Commander and his crew are on a suicide mission to destroy the OSI.

While they do this Hatred finds the explosives planted by the Monarch and, thinking they were put there by 21, he and Dean move them to Sphinx HQ.

At the Monarch household, the Monarch is examining a photograph that he swiped from Dr. Venture. He’s amazed to see it is a picture of himself as a small child, an equally young Dr. Venture and their respective parents enjoying each other’s company. He has no memory of this event and cannot figure out how it happened. 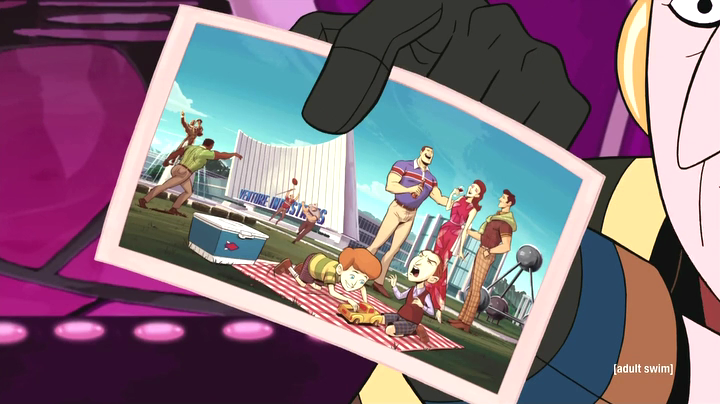 Back at the Sphinx aircraft, Hank realizes he’s wearing a strength suit and promptly escapes from the brig but is stopped by The Commander. When all seems lost, Samson returns, takes out The Commander by way of crossbow and escapes with the two captives. Hunter Gather then proceeds to destroy the Sphinx aircraft and the Monarch’s explosives destroy Sphinx HQ, finally annihilating the Sphinx organization.

Although 21 is out of a job again, Samson seems to have a soft spot for the recovering henchman and gives him back the crossbow. 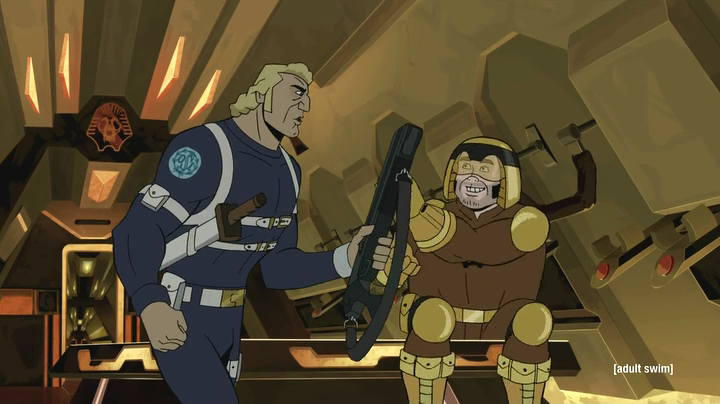 This was one heck of an episode and probably my favorite of the season so far. The characters have been developing nicely throughout, but it was the few moments where Hatred was reassuring Dean that really resonated for me. The homage to G.I. Joe was perfect, the return of a good old fashioned Samson killing was fantastic and the revelation that The Monarch’s relationship with Dr. Venture go back much further than we expected has excited to find out more. 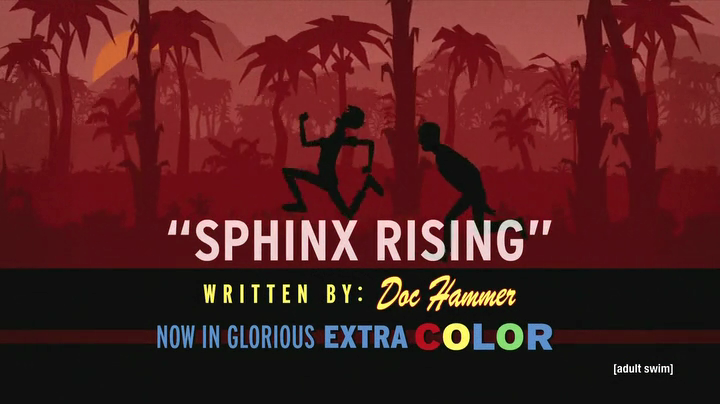 So until next week… GO TEAM VENTURE!