It’s Sunday night and you know what that means? GO TEAM VENTURE!

Without further ado, here is the breakdown:

The episode opens with Dr. Venture getting a call from the U.S. Military. It looks like the Doc sold one of my all-time favorite characters, Venturestein, to the military as per his plan in “¡Viva los Muertos!” (SE2E24). Unfortunately for the military, Venturestein went rogue in the South American country of Puerta Bahia. 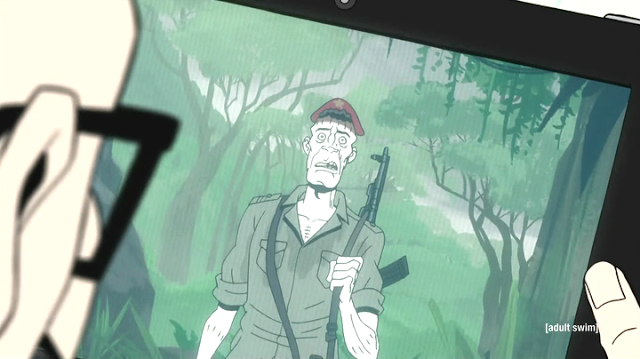 But even worse for the Doc he’s still under warranty. In a rebellious move, Dean insists he stay behind while the core Team Venture (Doc, Hank and Sgt. Hatred) leave for Puerta Bahia to corral Dr. Venture’s creation. 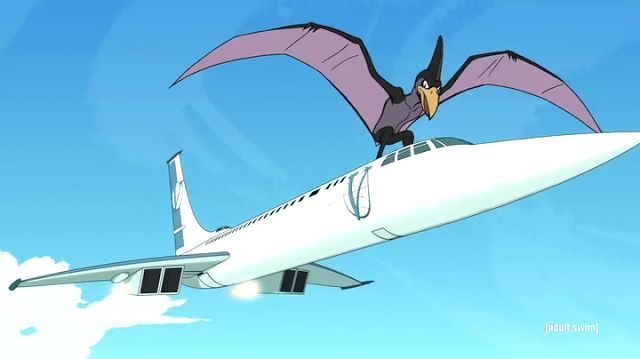 On their way down, the X-1 is attacked by an enraged pterodactyl that’s reminiscent of the one from the classic Jonny Quest episode “Turu the Terrible.” Hank escapes via jet pack, leaving Dr. Venture and Sgt. Hatred to fend for themselves. Unfortunately, the escape pod of the X-1 is rendered useless when the pair realize a support beam is stuck to the pterodactyl’s talons. In a brash move, Sgt. Hatred empties a magazine into the flying beast, sending the two tumbling into the jungle.

Back at the Venture compound, Dean sparks a kinship with H.E.L.P.E.R. and decides to revert the robot to its previous body. 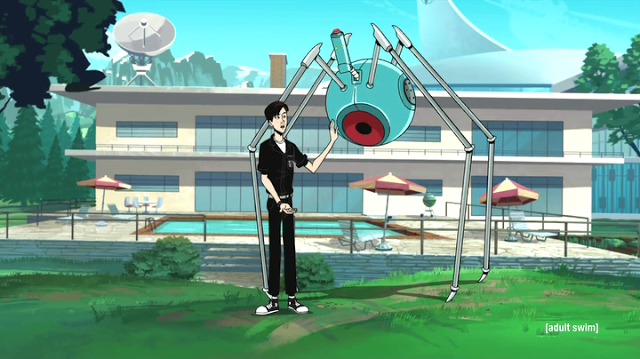 Deep in the jungle, the Doc and Sgt. Hatred are captured by a group of Dr. Moreau-esque animal men. Not too far from the X-1’s crash site, Hank takes stock of his situation and begins “Hank’s War Journal;” an inner monologue that’s suspiciously similar to one by Bruce Wayne in the classic “Batman: Year One.” Things only get worse when Hank discovers he’s sitting on a coffee bean plantation and decides to sustain himself on the raw product. 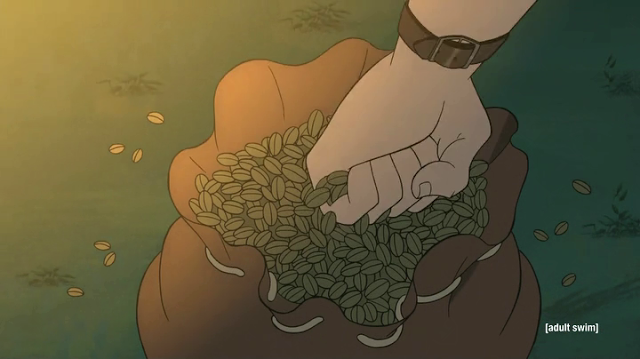 As Dean tries his best to gather the proper plans and materials to fix H.E.L.P.E.R., he is called to the front entrance of the Venture compound by Congresswoman Marsha Backwood; a not-so-subtle “homage” to a certain right-leaning congresswoman who’s recently been in the news. Ms. Backwood is shocked to find her constitute, Dr. Venture, is unavailable to help her current campaign because he’s busy working on a project for the government. She decides to aid him in his mission. 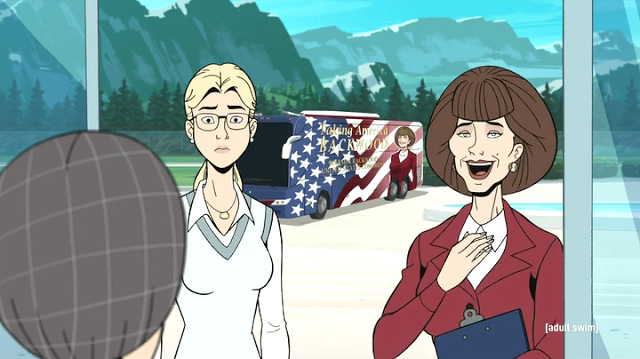 Dr. Venture is presented before Venturestein. The considerably more adept Venturestein explains that after his military training, he was sent with a group of similar reanimated corpses to South America as mercenaries working for the U.S. government. On his last mission he found George, the same little boy that taught him how to make tennis shoes in an instructional video during his time in the Learning Bed. 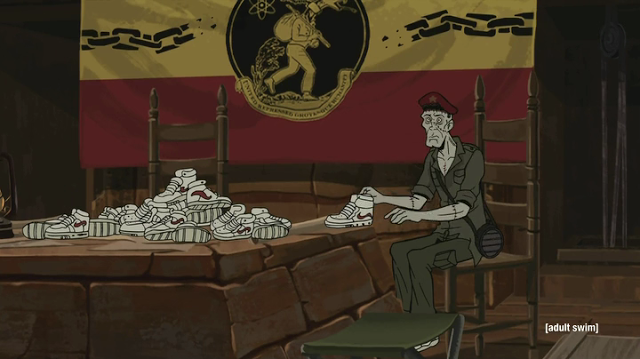 Instead of following orders and murdering George, Venturestein escaped and during his time on the run George teaches Venturestein all about the “exploitation of proletariat.” It was then that Venturestein vowed to free all the mutated freaks, biological servants and monstrous henchmen that are slaves of super-scientists all over South America and unite them into a guerilla army. 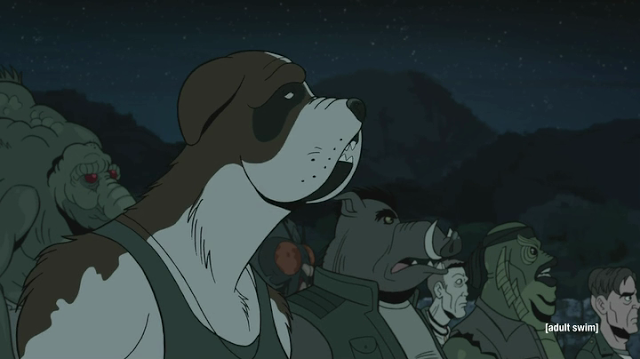 Meanwhile, and with the help of a monumental amount of caffeine, Hank has fully embraced his Dark Knight persona and starts systematically taking out the mutant guerilla army as “The Bat.” 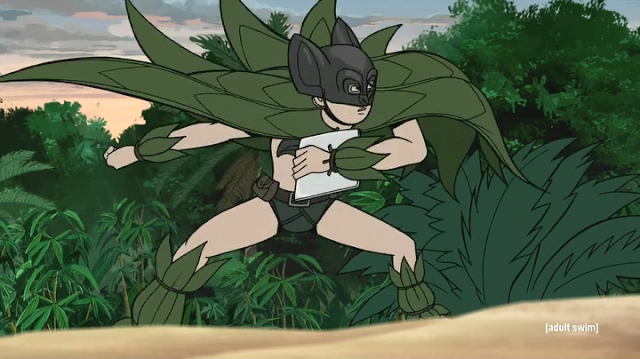 Back at Venturestein’s camp, we get a glimpse of Sgt. Hatred’s backstory in the form of a fever dream. In the dream, we see quick cut scenes where Sgt. Hatred was apparently injected with “Super Soldier Serum X” by General Treister. Then, if this reviewer is interpreting the dream correctly, Sgt. Hatred ate General Treister’s son on “bring your son to work day.” 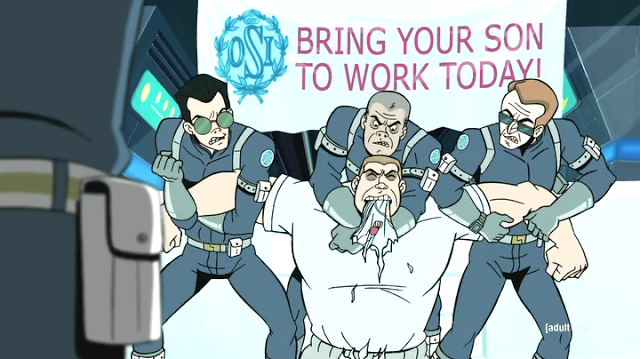 After the dream, we find the army of mutants under the command of Venturestein is baying for Dr. Venture’s death. Fortunately for the Doc and Sgt. Hatred, Hank swings into action and rescues them. At the peak of the battle, Hank and Venturestein have a moment of recognition a little too hard to explain to those that aren’t familiar with the “Batman Mask” and Hank escapes with the Doc and Hatred.

The three make it to the beach where Hank tosses the “jPad” provided to the Doc by the government at their pursuers expecting it to self-destruct. When there is no explosion, Hank finally has his caffeine crash and leaves Dr. Venture and Sgt. Hatred to their fates. Fortunately for team Venture, Congresswoman Backwood comes to their aid. 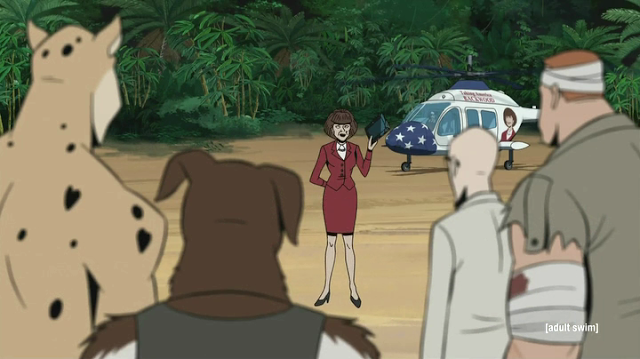 Unfortunately for the congresswoman, her head is blown up by the jPad.

The episode ends with Congresswoman Backwood, now an animated corpse herself, supporting the rights of all henchmen created by super science. Oh, and Dean fixed H.E.L.P.E.R., proving that super science may be in his blood after all. 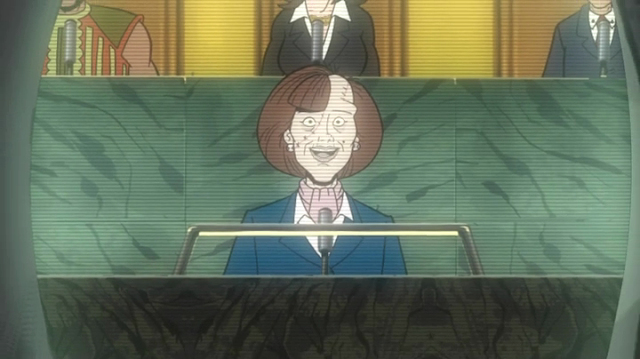 This was a tight little episode that gave us a nice answer to what happened to Venturestein and a cool glimpse into the Venture Brother’s potential as independent, super-science adventurers. I also really enjoyed the surprising preview into Sgt. Hatred’s past. It also had one of the funniest Blade Runner references I’ve heard in a while.

Overall, this episode wrapped up a few questions that have been floating around since season 2 and presented a few new ones that I hope are answered in the oncoming season. 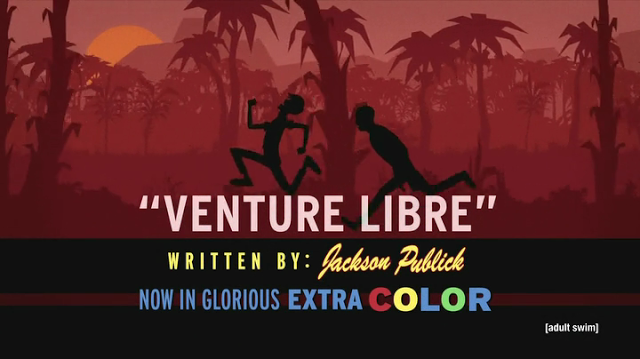