My name is Charles Knauf, and I’m addicted to The Venture Brothers.

Seriously; have you ever watched a show (let alone a cartoon) that has shoved more action, adventure, comedy, and obscure pop-culture references than The Venture Brothers?

I dare you to find one.

What once started as a tongue-in-cheek farce of Jonny Quest quickly turned into the crux of all that is my childhood. For those of you that know what I’m talking about and love The Venture Brothers as I do, skip on down a paragraph. But for those of you that have no idea what I’m talking about and want to experience a triple rainbow: please, catch up and watch seasons 1-4.

You can also get a good feel for the show by watching this.

WARNING: THERE BE SPOILERS AHEAD!

We last left off season 4 at Hank and Dean’s incredibly sad Venture-style prom that celebrated the boy’s “graduation” from their learning beds. Brock Sampson was heartbroken as he watched Molotov Cocktease literally drive herself off a cliff with her new lover, Monstroso, comatose in the backseat. Agent 21 had given up on The Monarch and quit being a henchman, feeling he has much more to offer after working for SPHINX. Dean Venture was crestfallen when he found his crush, Triana Orpheus, madly in love with her Twilight-style boyfriend Raven and proceeded to give Triana and her stepdad, The Outrider, a peace of his mind.

Oh, and Sargent Hatred finds out his estranged wife, Princess Tiny Feet, is way freakier than he imagined.

The season opens with Sampson finding the chastity belt Molotov Cocktease wears crumpled in a heap on the cliff edge, showing him that the “iron curtain” may very well have fallen for another. 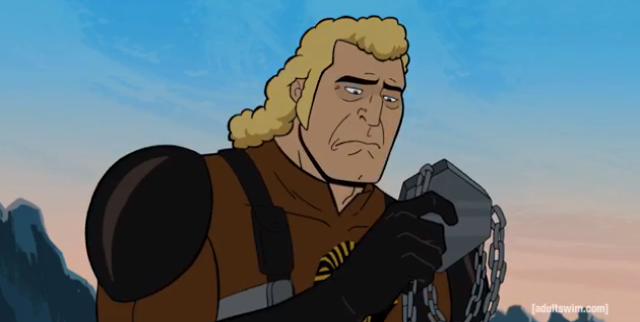 Then, Brock quickly discovers that Monstroso’s body next to the wreckage is a fake.

Dean rides up to the Venture compound with The Outrider and after an uncomfortable exchange between the two, Dean tells The Outrider to **** off. 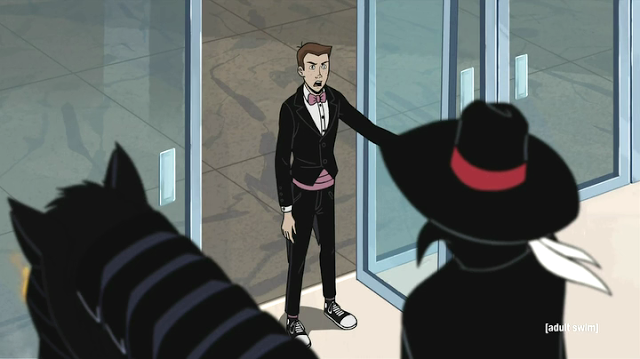 Hank wakes up in a haze with his half-sister and first love, Nikki, straddling him.

Sgt. Hatred gloriously returns home with Princess Tiny feet only to be shot down by her current beau.

21 returns to Sphinx HQ and is eager to start a new life as a super spy. Unfortunately he’s told that their leader, Hunter Gathers, is now the “HNIC” at OSI; therefore putting all agents of Sphinx off the disavowed list and making them full-fledged OSI agents once again. When 21 wonders what will happen to Sphinx, Brock tosses him the keys to the compound and states that the rent is paid up until the end of the year.

And finally, Dr. Venture wakes up to a phone call from his brother, Jonah Jr., wondering what’s going on with the electromagnetic plasma ray shield for Gargantua 2. 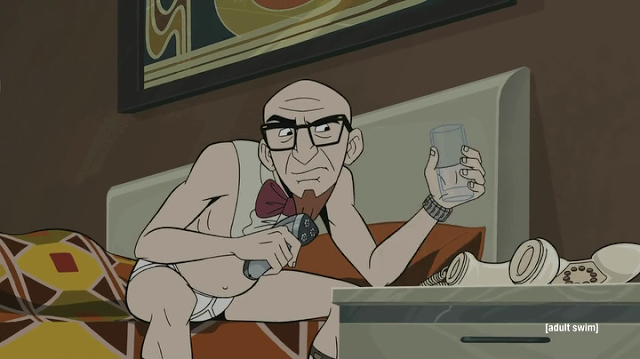 Thus: we enter into season 5.

As mentioned above, the main plot revolves around Dr. Venture hastily creating a “ray shield” for the Gargantua 2 under the name The Palaemon Project.

Meanwhile, Dean is trying to figure out who he is. He doesn’t want to be a super-scientist and, frankly, he doesn’t really want to be a Venture. The best Dr. Venture can do is promise that if Dean helps him out with The Palaemon Project he can move into the attic. 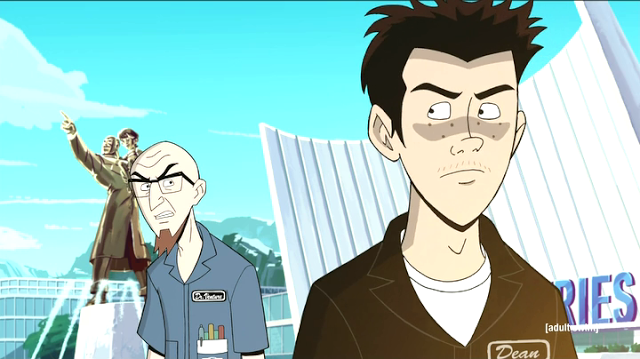 For help with The Palaemon Project, Dr. Venture recruits anyone he can from the local State College.

This eventually equates to grossly unqualified students working in a highly dangerous environment as unpaid interns. It was during the campus recruitment that Dean meets a new love interest; Talia.

Another problem Dr. Venture faces is he has no money to complete the project. So the Doc turns to a wealthy benefactor who rides in a Batmobile limo. Someone who’s first appearance was in “Tag-Sale: You’re it!” 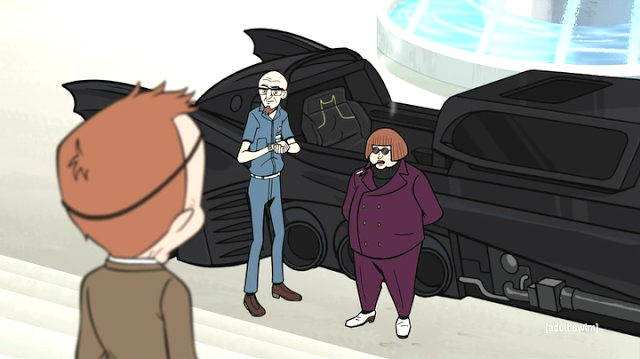 Enter Augustus St. Cloud: an incredibly wealthy collector of mainstream and obscure geekdom who we discover in a later scene bribed The Guild of Calamitous Intent to allow him to be Billy’s arch. When asked by Watch and Ward why he wants Billy so bad, St. Cloud mentions that he and Billy have always held a rivalry and Billy stole something special from him.

Dean quickly discovers this problem when his crush, Talia, exposes her extra extremities. Talia asks for his help in defeating Marvin (guest-voiced by Aziz Ansari), the alpha from the development division who wants to turn everyone into mutants and rule the world. 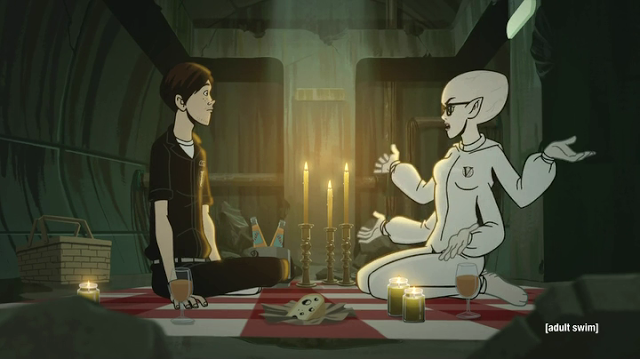 The Monarch, in denial of 21 leaving his cadre, assumes that his ex-henchman is simply in disguise as a Sphinx agent and spying on the Ventures from the inside. When the Monarch attempts to contact his old henchman, he discovers the mutant students living in E-Den (the failed bio dome from season 3’s “The Buddy System”) and assumes Dr. Venture is creating a mutant army. The Monarch gets Dr. Mrs. The Monarch to create his own mutant army. During their research, Dr. Mrs. The Monarch suggests they try to recruit the aid of Dr. Salazar; the foremost expert in genetic mutations. 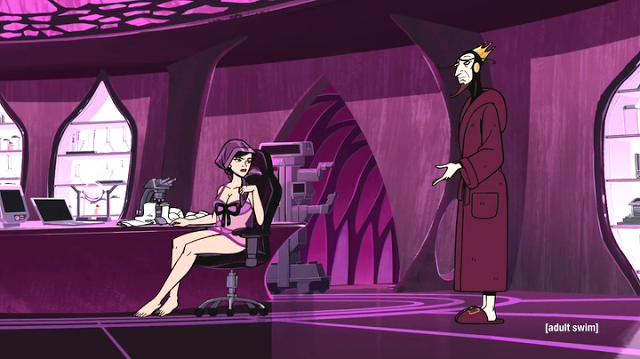 Dr. Venture eventually figures out there’s a problem when all of his green suited house workers are missing. He recruits the best and the brightest available to him; Billy, Pete White, 21, and Sgt. Hatred. After 21 discovers the ineptitude of his comrades, he quickly takes the wheel and delegates who is doing what. 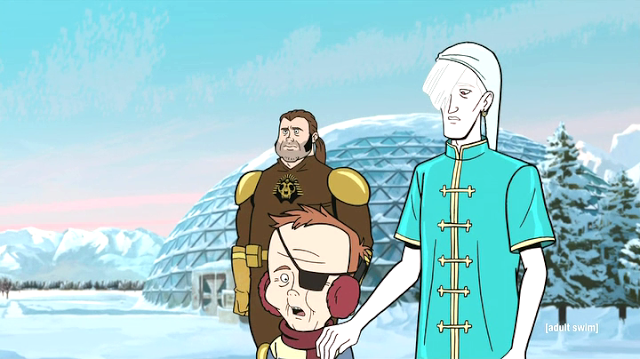 This “B-Team,” as Dr. Venture kindly puts it, has roughly 12 hours to decontaminate the mutant’s living quarters, reverse the mutations and have the ray shield prepared for Jonas Jr.’s arrival.
Billy and Pete are sent to St. Cloud’s mansion to collect the floating platform Augustus bought from Dr. Venture when the Doc needed extra cash. After getting caught, Augustus challenges Billy to a showdown at a recreated “Quizboys” set; the winner gets the floating platform, H.E.L.P.E.R., and the Rusty Venture Mego doll that Billy won in a recent eBay “joust.”

Back at E-Den, Dean steps up to Marvin for the challenge. Dean is outmatched in all areas of combat except for one: brother-to-brother challenges. Dean easily defeats Marvin by “Indian Sunburn,” “Indian Feast,” and “Indian Leg Wrestling” to become the new mutant leader. 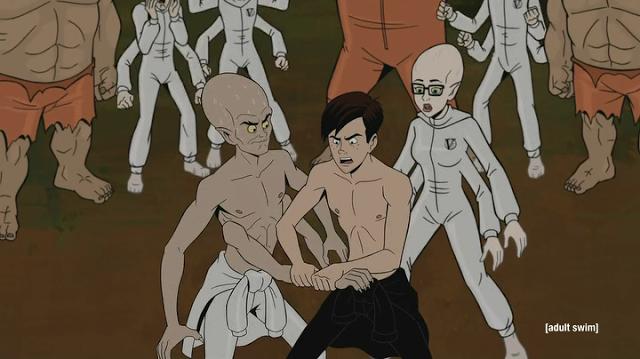 Back at Augustus St. Cloud’s, Billy wins the showdown and further fans the flames of hatred Augustus holds for Billy. Billy and Pete get back to the Venture compound just as The Monarch connects an “umbilical pipe” to E-Den. The Monarch releases his mutations which, to his surprise, end up being robotic butterflies designed to inject an antidote developed by Dr. Salazar into the mutants. Dr. Mrs. The Monarch insists this is the right move after coming to the conclusion that no one really wants to mess with mutant armies. 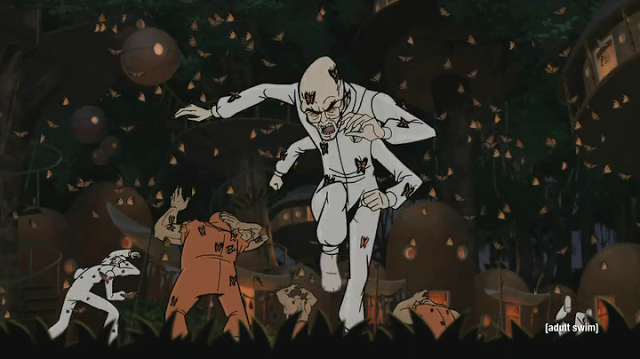 Fortunately, Dr. Salazar’s antidote works much better than Dr. Venture’s own antidote; a sad mixture of antibiotics and roofies that the Doc is pumping into the bio dome. Venture’s gas knocks the students out as they transform back to their former selves, giving Dr. Venture and the rest of the B-Team enough time to secure the ray shield and prep for Jonas’ arrival.

To my surprise Dr. Venture’s plan sort of worked; this is a huge departure from the usual catastrophic failures that have followed Dr. Venture since season one. But upon quick examination, the success wasn’t his own doing: it was a combination of efforts from what can only be described as a newly developing Team Venture. 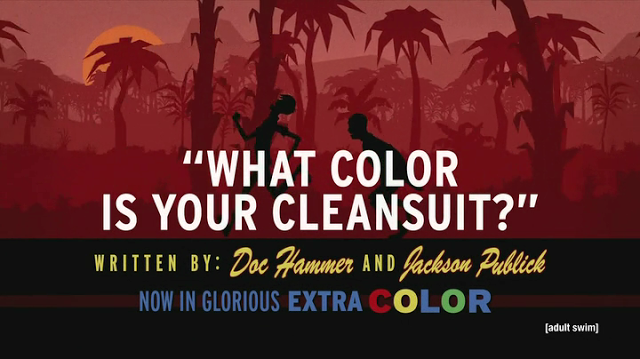 This is what interests me most about the new season.

It was fun to watch the original team fall apart, but Doc Hammer and Jackson Publick have slowly been building this motley crue for a few seasons and Team Venture has finally started maturing into something different. I thought the season five was a wonderful episode and a great jumping off point for The Venture Brothers.