Put these two things together and what do you get?  Well, you get the King of the Monsters, that’s what! 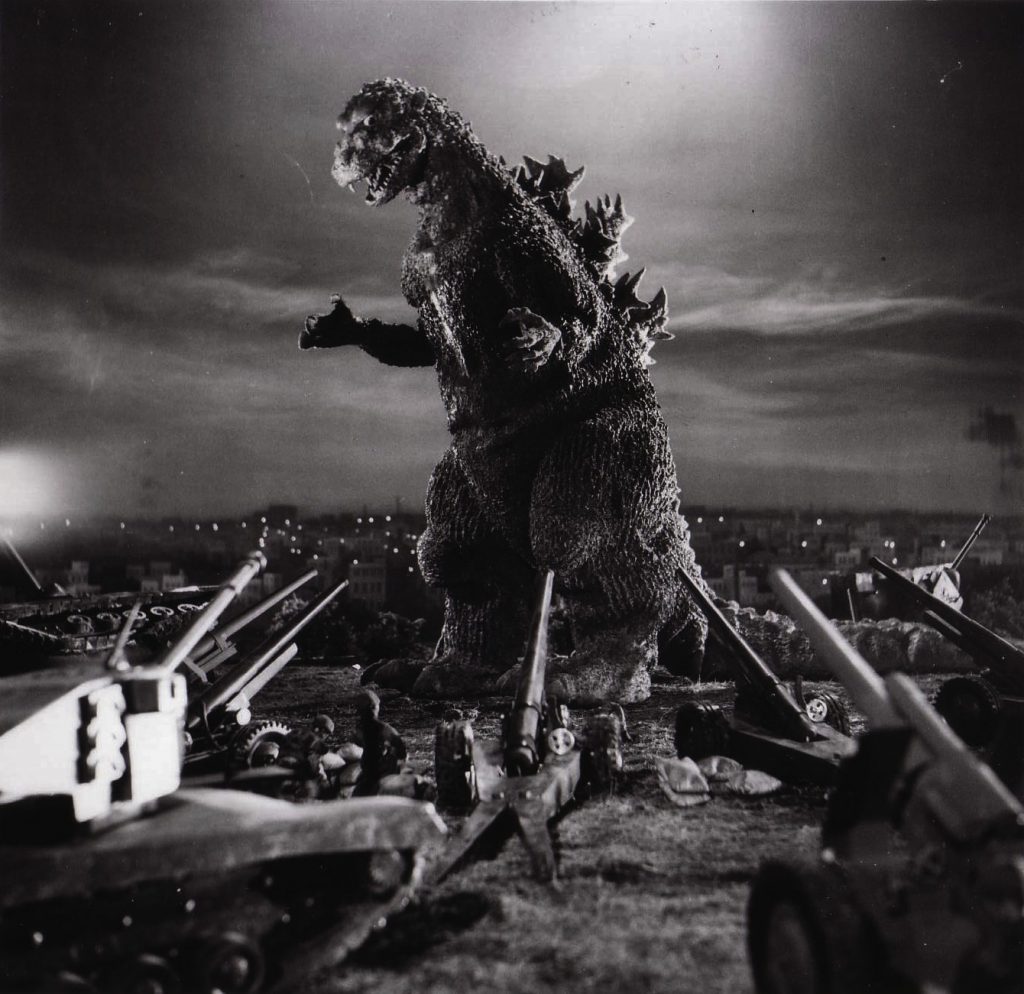 Creator and director Ishiro Honda played off the great monster as a metaphor for the Atomic Age and the nuclear threat to the world as a whole.  Godzilla’s creative homeland, Japan, knew of this threat better than anyone else on the planet, having been the only nation to ever have a nuclear bomb used against them.  Inspired by the fictional Rhedosaurus created by animator Ray Harryhausen for the film The Beast from 20,000 Fathoms a year earlier, Godzilla’s iconic character design, a design that, by and large, still stands pretty firm to this very day, was conceived as that of an amphibious reptilian monster based around the concept of a dinosaur.

The plot of the original film tells the story of Godzilla, a giant monster mutated by nuclear radiation, and who comes out of the sea to ravage Japan, bringing back the horrors of nuclear devastation to the only country that experienced it firsthand.

It was the first of many Kaiju films released in Japan (and becoming popular all over the world), paving the way and setting the standard for the genre and future Kaiju films, many of which would go on to feature Godzilla, many times in battle with other, equally large and dangerous Kaiju.

In 1954, the monster scared the bejeezus out of Japanese film audiences, and in doing so, made Hollywood (of course) sit up and take notice.  In the spring of 1956, TransWorld Releasing Corp. released a newly edited version of the film in the US, titled Godzilla, King of the Monsters!. This new version, one of the earliest Hollywood remakes of a Japanese film (though more a retread than a remake) featured newly shot scenes of American actor Raymond Burr inter-spliced with the original Japanese footage.  This new version, the one seen more often on TV (but the original Japanese Honda film is quite superior), made beaucoups bucks, and managed to bring the Kaiju film to a worldwide audience. 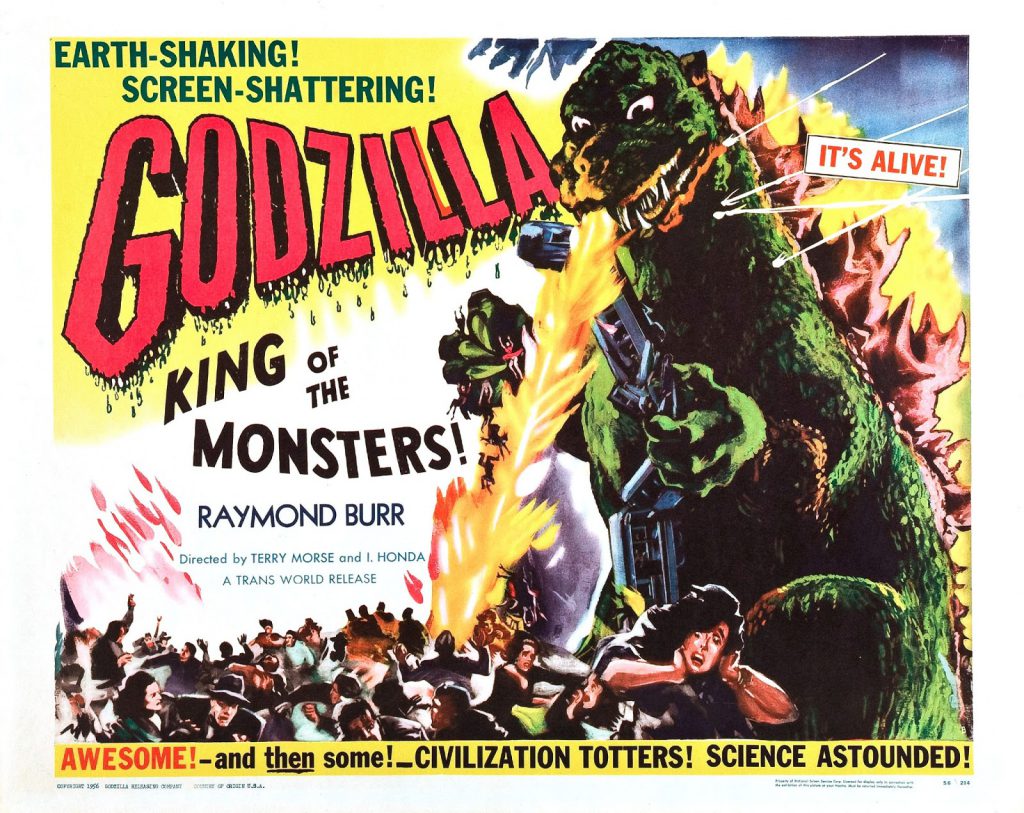 After this, Godzilla followed suit with about a billion sequels, spin-offs, and rip-offs.  Between 1955 and 2004, Toho Studios would make another 27 Godzilla films, the most famous (or infamous, if you will) were 1962’s King Kong vs. Godzilla, where Japan’s classic monster faces off against America’s great monster (though Kong, normally much smaller than ‘Zilla, was made much larger for this feature), and 1968’s Destroy All Monsters, a futuristic tale where our intrepid heroic monster must do battle with a slew of all-star monsters from Rodan to Mothra.  We would also get the son of Godzilla and Mechagodzila.

The marketing genius that was Godzilla could also be found in such things as the animated short, Bambi Meets Godzilla, and regular running series’ at both Marvel and Dark Horse Comics (he can be seen battling King Kong again, and Superman, over at DC Comics as well), the most recent of which is a great five issue limited series from writer/artist James Stokoe and IDW comics, that shows a Godzilla fighting unit from WWII through today.

There have been cartoons (who here remembers Godzooky!?) and lunchboxes and tee-shirts and video games (remember Rampage?) and action figures and coloring books and toys toys and more toys.  Hell, Blue Öyster Cult even came out with a song in 1977 AND Godzilla even has his own star on Hollywood’s Walk of Fame.

In 1998, Hollywood tried their hand at their own version of Godzilla, and it was an unmitigated disaster.  One of the worst films of the year, possibly even the decade.

As of this writing, Hollywood is at it again, with a scheduled release date of 2014. 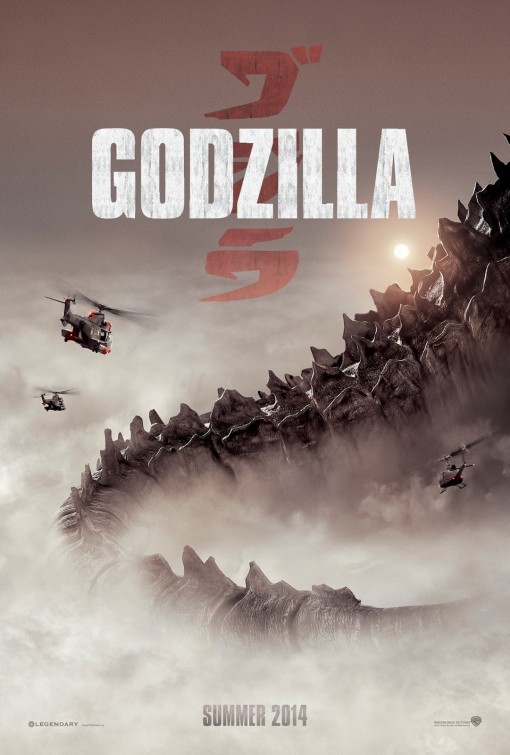 With special effects being better than in the 1990’s, and with my love of Guillermo del Toro’s Kaiju film, Pacific Rim (best blockbuster film of 2013), I have higher hopes for this beast.