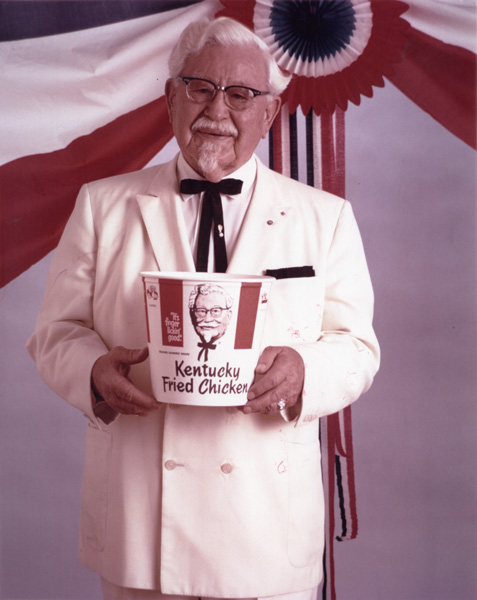 There is absolutely no reason that this particular segment of Antiques Roadshow should be weird, upsetting or creepy in any way, but yet, it totally is.

Sure it starts off okay- A guy describes how Colonel Sanders and his wife bought his childhood home and how he and his family built a house right next door to the one that the Chicken King took off their hands- but then it starts to slide into the weird when the gentlemen (who is standing next to a signed portrait of the Colonel and his white suit), begins spilling the tale how the man who brought delicious chicken into the fast food market and his wife MOVED INTO THEIR BASEMENT while the homeowners WHO TECHNICALLY NO LONGER OWNED THE HOUSE lived above them like gods until their house was finished being built.

Then the segment moves into costumed impersonations and Colonel Sander’s bizarre approval of his young doppelganger’s look (the story ends with the Colonel’s driver escorting the man to a dance…no mention if the guy who dressed up like the Chicken Millionaire had a date other than the driver but I like to imagine that he didn’t).

Enter the “expert”, who has seemingly dressed herself in the female version of the Colonel Sanders look, talking about the man’s items which is just about as awesome as you could want from a boring, yet strangely addictive, show about people’s crap.

The best part of the whole segment?

Learning that Colonel Sanders favorite food was not chicken but White Castle burgers….perfect.