When it comes to mysteries and thrillers, there are a lot of them out there.  And when it comes to a series, you want a character you at least like, enjoy reading about, and can look forward to with each book and a new mystery to solve.

Karen Vail is one of those characters.

She’s ones of the foremost FBI profilers who has done her work and time at Quantico, climbing the ranks, and is one of the more successful women working for the Federal Bureau of Investigation. 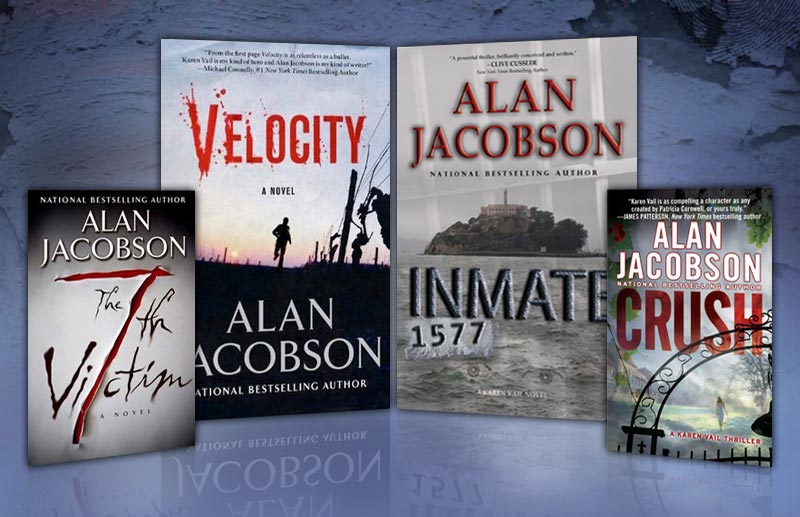 Author Alan Jacobson put his work in with this character and series, working on it for seven years before publishing the first Karen Vail book.  He made friends with a number of people at Quantico and the FBI, learning and educating himself in just about everything so that when he starts working on one of his Karen Vail books, he has the FBI tools to make the characters real and the story not just plausible, but a great example of what goes on at in the world of the FBI every day.

In Alan Jacobson’s third novel, The 7th Victim, we meet Karen Vail for the first time.  As a member of the Behavioral Analysis Unit, joining with a crack team of experienced detectives, it’s up to her to create the solid profile that will lead them to the identity and location of the Dead Eyes killer.  The murders are garish and gruesome, as Vail investigates the crime scene of each victim, until an important person of stature is horrifically murdered, changing the whole profile of the killer, but also presenting some terrifying links to Vail herself.

Karen Vail is a well rounded character who has plenty of personal issues going on in her life with an abusive soon to be ex-husband and a young child who she cares for more than anything in the world.  She also teaches future FBI agents, and fights to maintain her profile as a high-ranking and well respected profiler. The 7th Victim is an entertaining, fast-paced read in the style of Patricia Cornwell’s Scarpetta series, but adding a further grittiness and realism with the killings and the harsh everyday fights Vail must go through as an FBI profiler and mother.

At the start of the book, Vail is on vacation in the beautiful wine country of Napa and Sonoma counties.  After the stress, pressure, and near-death experiences of The 7th Victim, Vail can certainly use the break, and has been so ordered by her ASAC.  But as Vail and her boyfriend, Detective Robby Hernandez, are about to enjoy a very expensive wine tour, they are told it’s been canceled and they’ll receive full refunds.  Vail’s curiosity gets the better of her and she soon finds that a dead body is the culprit.  Her profiling skills automatically kick into gear as she strategically maneuvers herself onto the task force, leaving Hernandez by the wayside.  But this is who she is.

Now on the Napa County Major Crimes Task Force, Vail teams up with Investigator Roxxann Dixon, as soon more bodies are discovered each with telltale signs of the “Crush Killer.”  Then the killer begins contacting Vail, threatening not just her life but that of her son if she doesn’t do exactly what he says.  But the wine industry is an important part of the nation’s economy, and the political issue of whether to release the details to the press creates more enemies for Vail.  Ultimately it will be up to her to manage and keep the task force together, and catch this Crush Killer before he gets to anyone else.

Crush is a story that will have you entranced, causing your mouth to dry up in a craving for that tasty red liquid; and after finishing the book you’ll feel the urge to check out Napa and Sonoma counties to see if they really are as beautiful as Crush depicts them.

We last left FBI profiler Karen Vail with the Crush killer caught, and the serial killings in the beautiful wine county of Napa Valley finally at an end; but the nightmare is still continuing for Vail, as her boyfriend and love of her life, Detective Robby Hernandez, is missing, and she doesn’t have a clue where he could be.  Vail doesn’t take a break, keeping the team together to track down and find Hernandez.  Then she gets the call she doesn’t want from her boss, ASAC Thomas Gifford: she is to come back to Washington DC right away, as her talent and skills are needed on a high profile case.  Vail tries everything she can to stay on the Hernandez case, but Gifford won’t hear of it and soon she’s back in DC working on the new case, trying to keep focused.  Vail meets up with Hector DeSantos, a government operative who knows people in high places.  Eventually everything comes down to a big confrontation, as Vail wants back on the Hernandez case, and finally learns the truth about Robby.

Hernandez was working undercover on a DEA operation, investigating the drug cartel, and a notorious kingpin Carlos Cortez.  Vail soon realizes her efforts to find Hernandez may have jeopardized his cover, after showing a photo of Vail and Hernandez with Quantico in the background.  Once Vail finds out about Gifford’s involvement with Hernandez, she’s back on the case and working with DeSantos; she will stop at nothing to get him back alive.  After her son, he’s the most important person in her life.

Alan Jacobson goes deep into the world of the drug cartels and illegal drug trafficking across the border.  Readers learn astounding details on various ways drugs are smuggled through hollow corks and on the backs of wine labels.  Velocity has both a compelling action story – equal to Crush – but also a fascinating look into a world that many people know exists, but know very little about.

Jacobson tells two stories here, jumping back and forth in time and from place to place.  First there is the story of Karen Vail, the FBI’s best profiler, who has been called back to California, to San Francisco to investigate a growing series of horrible killings, specifically elderly women who have been raped and brutally murdered, and their husbands, killed and left dangling and hanging from San Francisco landmarks.  SFPD Inspector Lance Burden is working with Vail, along with former colleague, Detective Roxxann Dixon; and with a crack team, the clues lead them throughout the beautiful city, as they investigate the bodies and put the pieces together.

Then there is the story of Walton MacNally, back in 1955, who has a series of really unfortunate events that lead him to start stealing and breaking the law, all to help and support his son.  But then he gets caught and spends his time in Leavenworth Penitentiary, and after a failed jailbreak, ends up on the rock of Alcatraz, where his life continues as a prisoner of one of the most infamous prisons in history.

The reader knows these stories are somehow linked, but Jacobson does a fantastic job of maintaining the suspense for literally hundreds of pages, and Inmate 1577 is a great 500-pager.  The author makes working a serial killer case more real than ever, as the agents involved continue to be stumped at finding the killer, and feeling simply lost, until they get another clue they must chase down.  While Jacobson does take a little while to actually get to Alcatraz in the book, as well as being a little too liberal with the acronyms, these are but minor distractions in this great example of the page-turning thriller.  Jacobson even spent some time on Alcatraz writing the book, as well as many days and interviews researching the book.

Alan Jacobson picks up the continuing story of Karen Vail in her next adventure, as she takes a trip to England in No Way Out, due out September 17th from Premier Digital Publishing.