Before I begin let me say that I held out little hope that Orange Is the New Black would be any good.  Perhaps it’s because I had been subjected to Netflix’s streaming cruelty in its last two offerings of Hemlock Grove and the disastrous Arrested Development Season 4 (I’m leaving House of Cards out of this equation as I had no desire to see it, I’m sure it’s just fine).

I didn’t think this tale of an upper-class white woman being sent to Federal prison was going to be any better.

How delightfully wrong I was.

Piper, who got freaked out by the danger, left her girlfriend and returned to her WASP life where she became the “…nice blond woman she was supposed to be” and promptly buried her lesbian/drug money mule phase behind her, focusing instead on launching an artisanal lotion company and getting engaged to a very understanding Jewish guy named Larry Bloom (Jason Briggs) who promises he won’t watch Mad Men without her.

Her life was, in a sense, going swimmingly.

That is until she was named as a conspirator in her ex-girlfriends drug exploits a decade later and ended up in prison.

And here is where the show becomes incredible.

In lesser hands, Orange Is the New Black could very well sink into either a chick-lit pool of tepid banality or completely swing the other way into the male fantasized Caged Heat (and yes, you will be seeing scenes of graphic sexuality so prepare yourself), but it doesn’t, thanks to the strong sensibilities of show creator Jenji Kohan (Weeds) and executive producer/writer Liz Freeman (Xena: Warrior Princess, House) who have managed to build a cast of compelling, frightening and funny women who are all woven together to create a tapestry that manages to transcend the myth of the Women-In-Prison genre and instead focus on how someone can stay strong amid the horrors of being locked away.

As Piper is thrown into this new world where she has to immediately learn what to do, say and act before committing a social faux pas (like accidentally insulting the very intimidating Russian Kitchen Chef/Fellow-Inmate Galina ‘Red’ Reznikov-played by Kate Mulgrew who will forever banish the vision of Capt. Janeway from your head) she must first look to those who know the ropes to show her the way.

And while that advice can sometimes be helpful (as when the warden speaks to her like an actual human being and tells her what to expect, although he does warn her to “…stay away from the Lesbians”)  it also acts as a way to disconnect her from the reality she has always known (via her bunk mates rules of never sleeping in the bed, only on top of it and that she will only be known by her last name for the run of her fifteen month sentence) thus breaking her apart in order to build her back into someone she doesn’t know if she will like.

And it’s that journey that makes Orange worth watching. 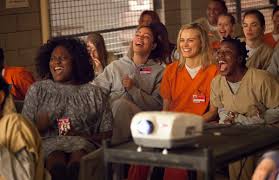 With a ensemble cast that is at the top of their game (especially Natasha Lyonne- whose own legal and drug issues could have very well vanquished her to the No-Man’s land of acting had she not been so frakking good- who brings to life Piper’s bunk mate Nicki Nichols, a druggie who is both funny and a bit scary as well) it is well worth the time to watch the 13-episode first season (which has just been green lighted for a second) just to get to know them.

Although, you should savour each episode and not plow through it like a meth-head or you’ll miss some of the smaller moments that can and will break your heart, so go slow and take your time with it.

Because when you get to the final scene of the pilot where Piper is losing her shit and she is confronted by the very last inmate one would ever hope to see, you will be filled with the most complete and concrete feeling that yes, this is fucking good TV.

The complete first season is streaming now on Netflix

In this article:Let It Warm Up, Orange Is The New Black, Television Review