So here we are; two episodes away from the season finale.

Doc Hammer and Jackson Publick have been carefully laying track since last season’s finale and, if you’ve been paying attention, this is really just a chance for the two creators to tee up for a satisfying payoff.

And if Hammer and Publick keep the story moving as well as they have thus far, I think we’re all in for a great time.

But I digress; this week’s episode, “Bot Seeking Bot,” was a fitting start for next Sunday’s finale.

The episode starts at the funeral of Boggles the Clue Clown; the very same supervillain Monstroso fingered as a member of “The Counsel of 13” in this season’s episode “O.S.I. Love You.” The two-headed member of The Counsel of 13, “Dragoon/Red Mantle,” (fused together by Phantom Limb in season 4’s, “The Revenger Society”) is in attendance and paying their respects. 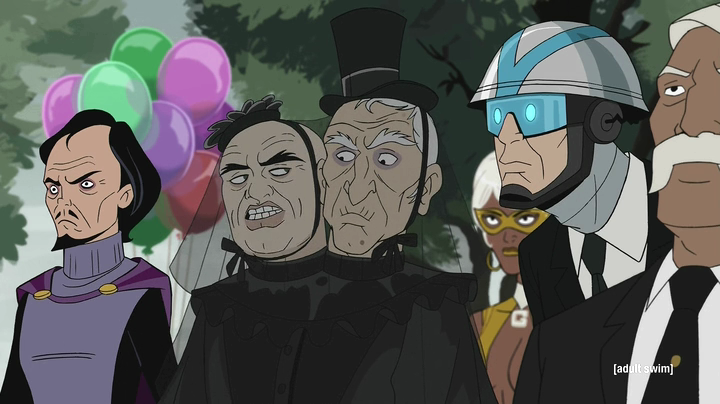 Secretly watching over the event is Brock Sampson, Shore Leave, Headshot and, the newest member of O.S.I., “Snoopy” the tech-guy. They’ve been hot on the trail of Boggles since Monstroso’s tip and are trying to match up the silhouettes of the Council to some of the mourners in attendance. 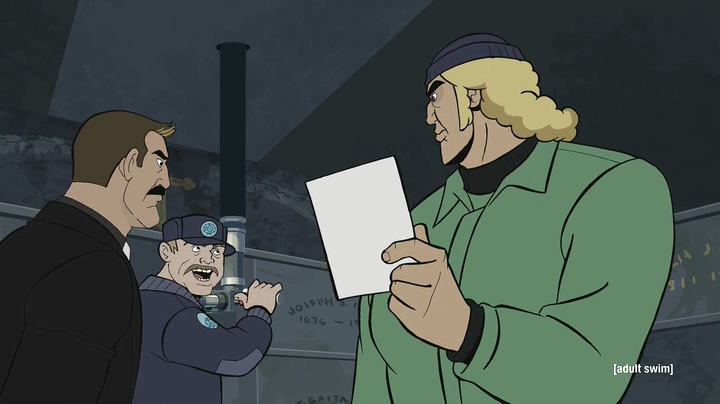 Luckily they get a break when “Vendata,” an evil cyborg (that bears a striking similarity to Robocop) shows up to inform Dragoon/Red Mantle that The Sovereign is having an emergency meeting for the council. 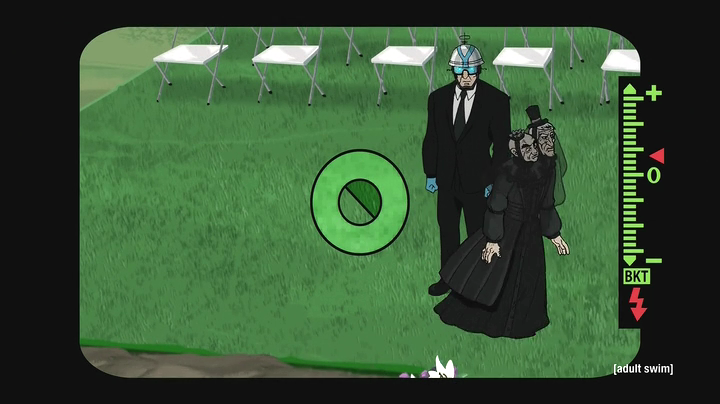 Dragoon/Red Mantle is perturbed by Vendata’s interruption and point out the android’s coldness is probably the reason he’s still alone.

This leads us to the O.S.I.’s opening: a personal ad on Craigslist for a “Bot Seeking Bot.” You see, Vendata (a creation by Jonas Venture Sr. that went off on his own to perpetrate evil after it tried to kill young Rusty Venture) decided that an internet personal ad is the perfect way to introduce someone to his lonely life. O.S.I.’s plan is to disguise Ghost Robot as Guild member Galacticon, answer the ad, and gain as much info about the Guild as possible. 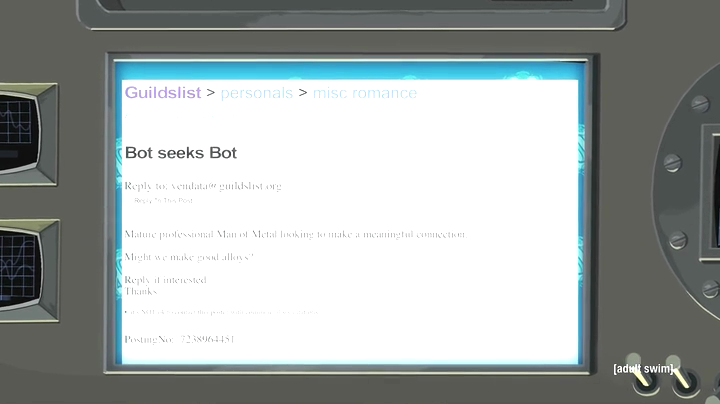 At the aforementioned Council meeting, we learn that Boggles has been replaced by a new member: “Phage.” The other Council members want to celebrate the first new member in 15 years, but The Sovereign reiterates the importance of anonymity; they must not know each other or be seen outside together. Seconds after The Sovereign ends his transmission, the group exits the Chamber Sub Rosa, meet together in the main hall, and plan to celebrate the new member that evening. 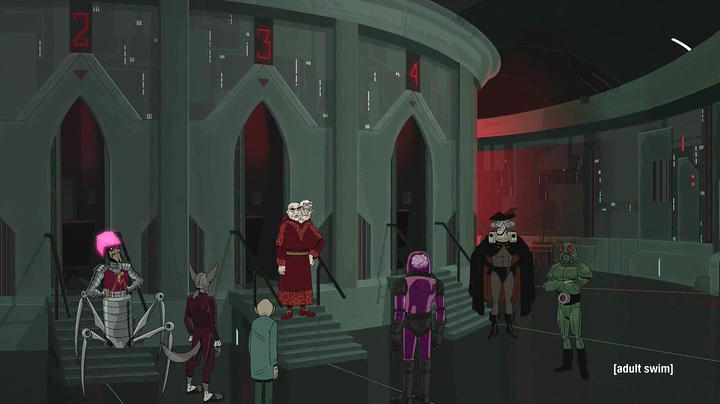 On their dinner date, Vendata and Ghost Robot (in a perfect disguise as Galacticon) quickly realize that they do not eat. As a result, they decide to go to the supervillain club that the Council’s celebration happens to be taking place.

Hot in pursuit, Brock and Shore Leave find out that the supervillain club is deep underground. Snoopy informs the agents that their monitoring equipment is useless, leaving Ghost Robot in peril. Brock decides to pull Ghost Robot out of the mission, but to gain access they need disguises that can be found at Brock’s old place on the Venture compound.  At the compound, Dr. Venture catches the two agents trying on Brock’s disguises and ignorantly puts together that they’re going to attend a costume party. 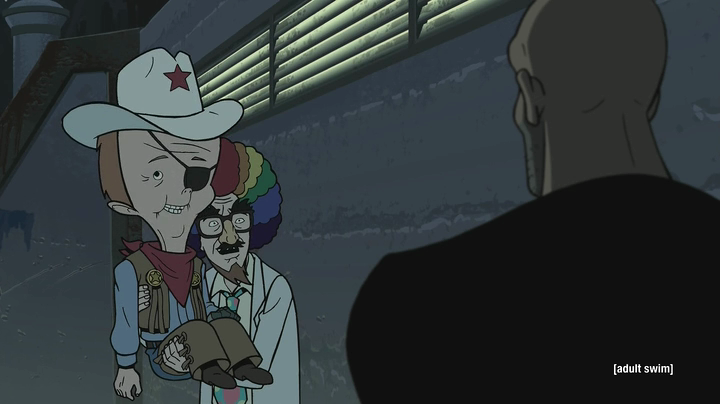 Dr. Venture visits Billy Quizboy and tricks him into coming out to the “costume party.” Unfortunately, the two are immediately captured at the front entrance and taken into custody by the club. 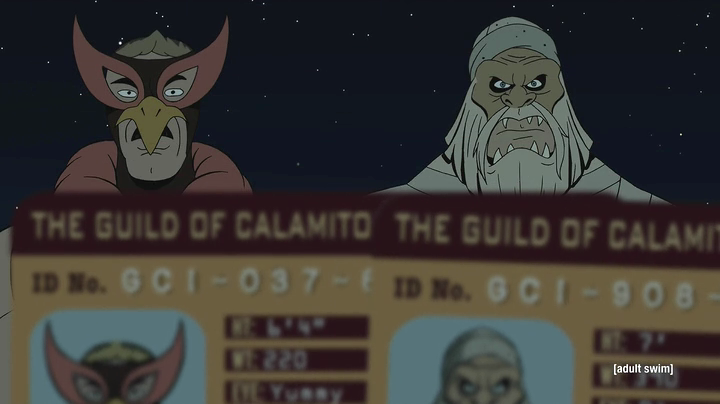 Inside the club, Brock and Shore Leave (disguised as Yeti-Mummy and “Fruit Bat,” respectively) attempt to make contact with Ghost Robot. 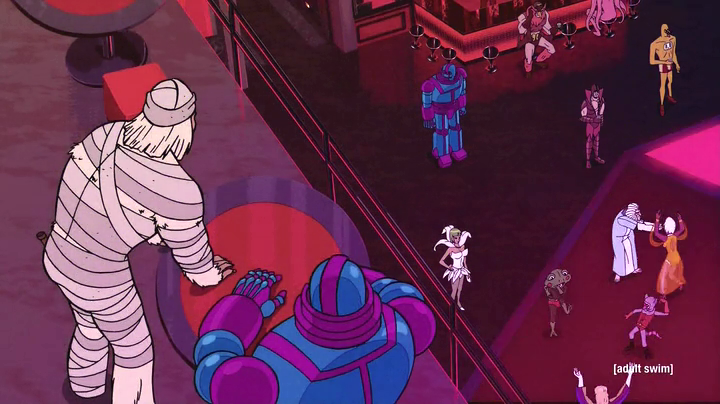 Seconds before they get a chance to escape the agents find themselves in a pickle: the real Galacticon makes an entrance. Brock escapes to the bathroom with Ghost Robot in order to give his Yeti-Mummy disguise to Ghost but are caught in the stall by Vendata. Brock pounces, steals Vendata’s armor, and moves to flee. 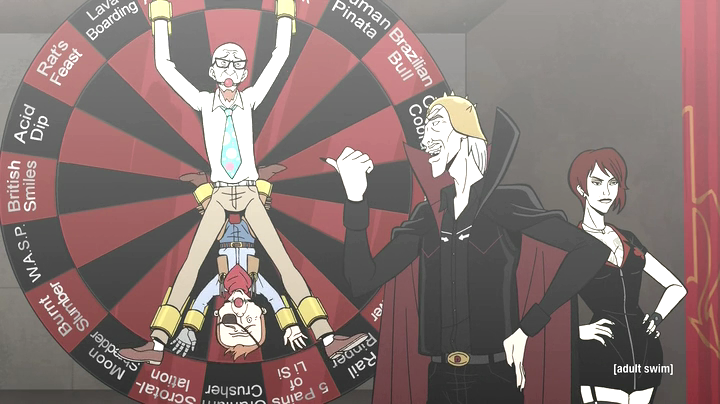 Unfortunately, Dr. Venture and Billy are paraded out atop the “Wheel of Torture” for a raffle; the winner getting a chance to kill Venture and Billy in a gruesome, supervillain-style way. Brock, torn between his mission to get Ghost Robot out and his allegiance to Venture, decides to stay and attempt to rescue the Doc. Unbeknownst to the group, one of the supervillains in the club calls a “friend” on a payphone about Doc’s capture.

To gain control of the situation, Brock stealthily punches the victor of the raffle in the throat and steals the winning chip. Up top, Shore Leave is doing his best to saw through a rope holding a colossal disco ball. As the moment approaches to kill the Doc and Billy, a familiar voice breaks up the fun. The “friend” on the other end of the call is none other than The Monarch accompanied by his wife, Dr. Mrs. The Monarch. 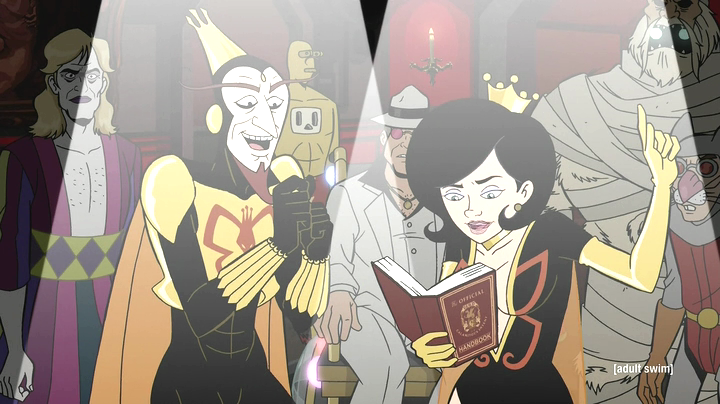 The Monarchs argue their case: sighting Guild guidelines that, as Dr. Ventures arch, it’s up to The Monarch how and when the Doc should meet his doom. They successfully get Dr. Venture and Billy released, Brock is able to move to the exit with his crew and the Monarch feels victorious when…

… Dr. Venture seemingly gets crushed under the huge disco ball. 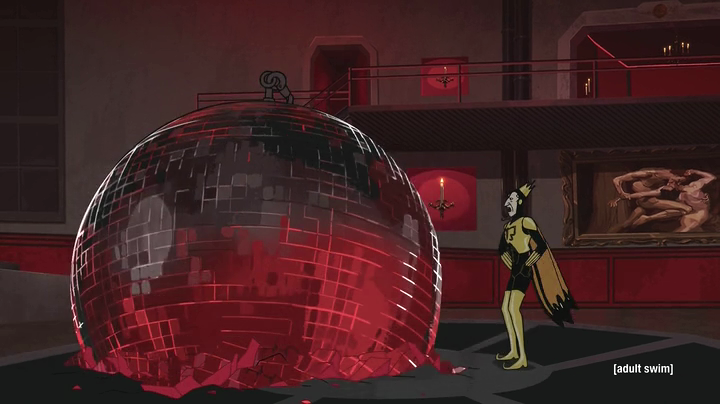 Wow. I did not see that coming.

One of the little hunks of valuable information I learned over the years regarding TV writing is that one of the most important and underrated episodes in a season is the episode before the season finale. Think of the episode as the “straight man” in a comedy duo; it must carefully set up the finale, but it never seems to receive the attention that a season finale may get.

What I see in this episode is a wonderful running start to the finale. 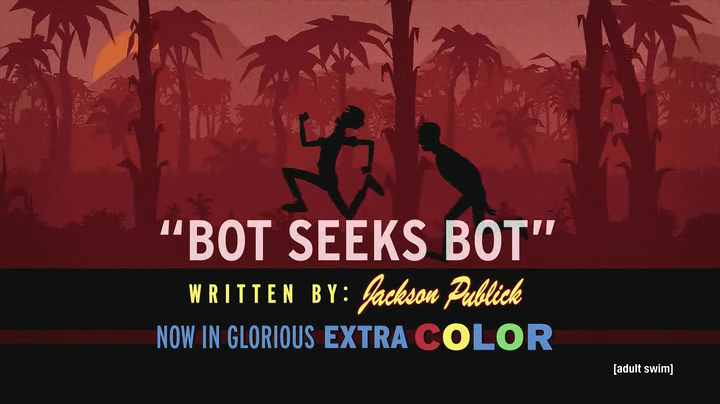 Par with The Venture Brothers we’re hit with more questions, (the main being, “my god is Doc DEAD?”) yet we crave to see more. Hammer and Publick did well on this episode and I can’t wait to see some of those answers coming at us next week.