Here we are folks; the season finale of The Venture Brothers.

After last week’s epic episode, I was really looking forward to seeing what Doc Hammer and Jackson Publick had in store for us and I have to say:
I’m a tad disappointed.

What I expected was some movement forward – perhaps some answers as to Sgt. Hatred’s past or some more moves in the ever-growing fight between the O.S.I. and the Guild of Calamitous Intent. Maybe even more personal growth with Hank and Dean. 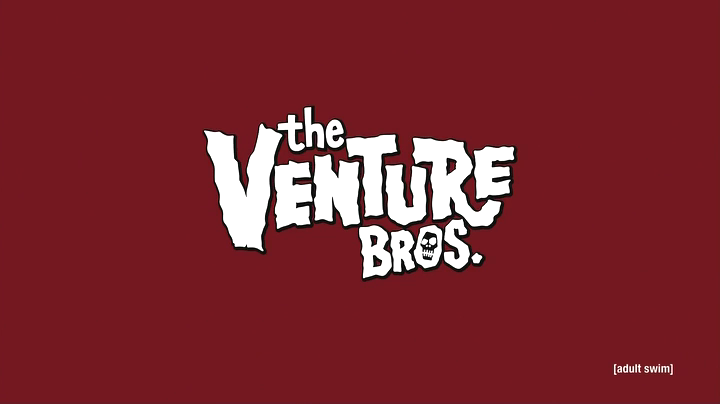 Instead, we got kind of a flat episode that really shifted the entire season back to square one. 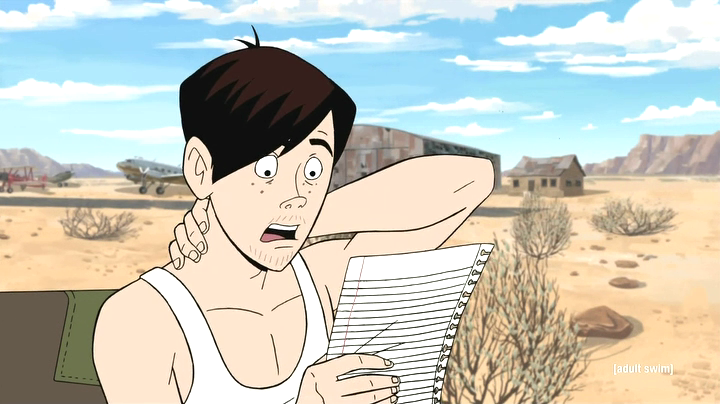 It opens with Dean waking up at a dusty airport. According to a note pinned to his shirt, Sgt. Hatred assumed the worst regarding Dr. Venture’s mishap (a gigantic disco ball crushing him in the previous episode, “Bot Seeks Bot.”) and left the boys with their godfathers; Dean is now being taken care of by Col. Gentleman and Hank by The Action Man.

We find Hank with The Action Man at his retirement village in Boca Raton. The two are paying their respects for Paul Entmann, “the Humongoloid” by burying his tiny body in a shoebox. 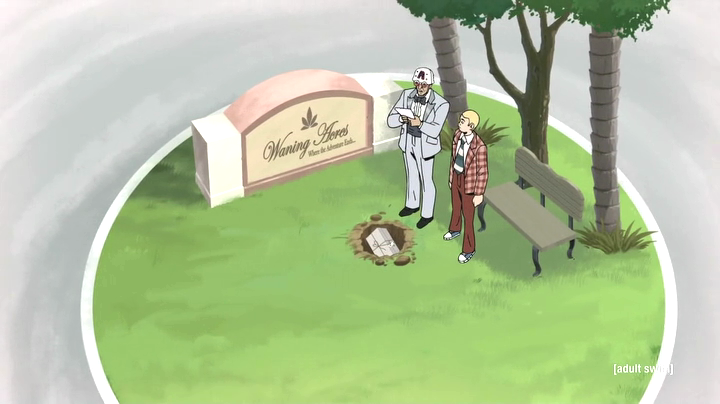 We get a little backstory on The Action Man’s close relationship with Entmann and discover a little known tradition of urinating on the coffin of a fallen Team Venture member.

Back at the Venture compound, Sgt. Hatred reveals to Henchman 21 that Dr. Venture is indeed alive and taken prisoner by The Monarch. Hatred needs 21’s help and they decide to team up and go in together for extraction.

Meanwhile in the Monarch’s Floating Cocoon, Dr. Mrs. The Monarch is busy patching up Dr. Venture (as per Guild regulations) and The Monarch gleefully plans the perfect way to torture his captive. 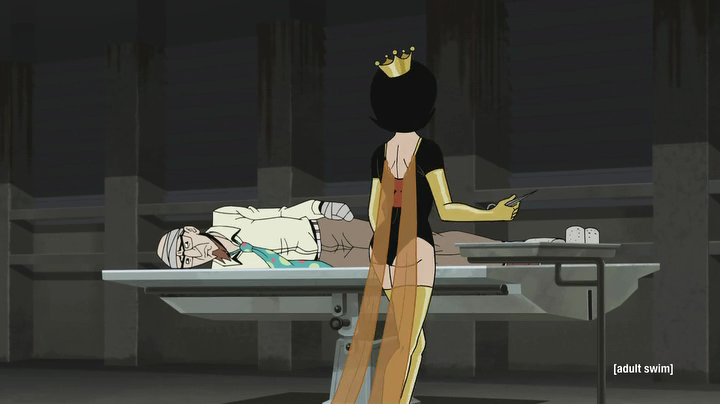 Unfortunately for The Monarch (in his Ming the Merciless costume), he quickly finds that his various torture techniques do almost nothing to Dr. Venture.

At Boca Raton, Hank naturally gets into the swing of things with the Action Man. Hank plays the role of Action Man’s wingman by attempting to pick up a woman named Rose. They’re game plan is to make it look Hank is being seduced by Rock and Roll but saved by Action Man and show tunes. When their plan works, Hank invites Rose to join them for dinner. 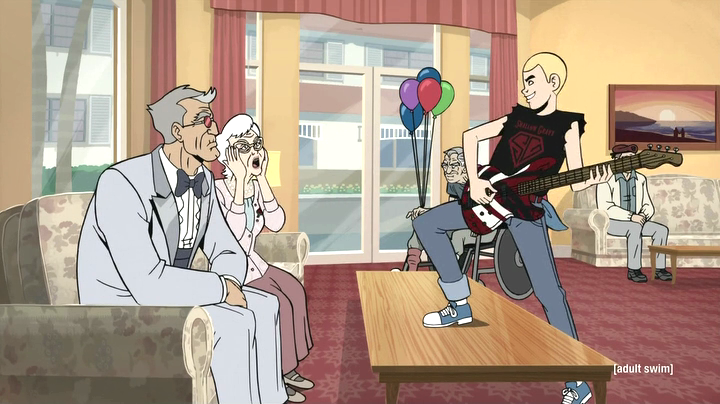 Dean is helping Col. Gentleman write his memoirs and do various oddball chores. Unfortunately, Gentleman’s relationship with his better half falls apart (once again), sending him spiraling into depression and longing for the good old days.

21 and Hatred make their way into the Cocoon and start to warm up to each other. After they split up, Hatred stumbles on one of the Pupae Twins, Kevin, and is tricked into thinking 21 double-crossed him. Enraged at 21, Hatred is then thrown off the cocoon.

Back in the Monarch’s torture chamber it finally dawns on The Monarch that he cannot break Dr. Venture. Dejected, The Monarch breaks the usual, adversarial exchange he had with Venture and takes a few moments for a more relaxed tête-à-tête. They continue to try and outdo each other, only this time the competition revolves around how depressing ther lives have become. 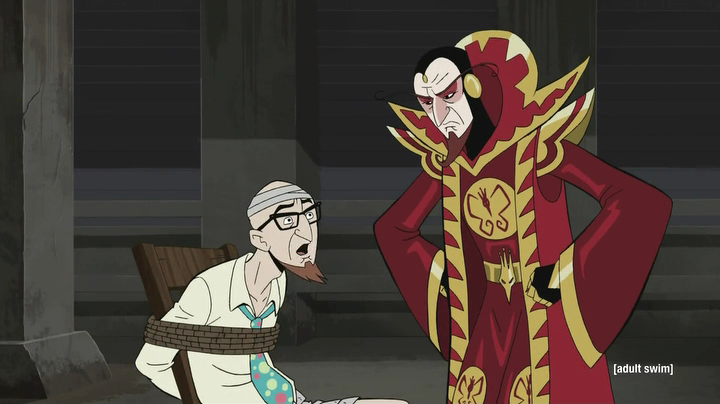 Finally, the Monarch releases Dr. Venture; his one request is to make it look like Venture escaped to save face with Dr. Mrs. The Monarch.

In Boca Raton, The Action Man finally gets in good with Rose at dinner. It’s here that Hank recognizes her voice and we find out that she is Billy Quizboy’s mother. 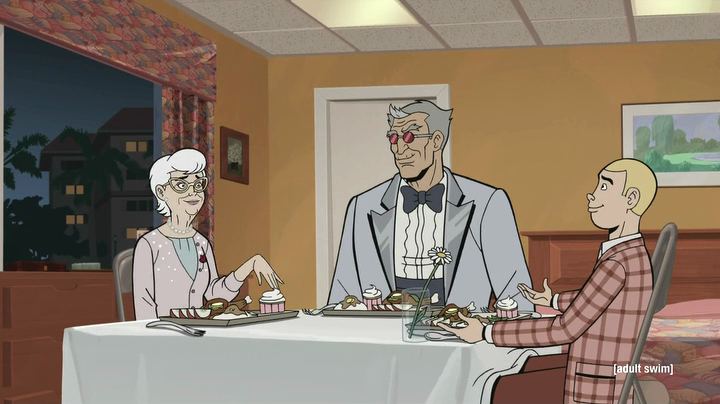 As Dr. Venture tries to hitch his way back to the compound, Sgt. Hatred barrels by in his massive Hovertank. Still enraged by 21’s seeming double-cross, he opens fire at the Cocoon. Hatred ends up smashing into the Cocoon and sends the vessel crashing into The Monarch’s house.

After the credits, Dean finally reveals to Hank why he’s been so angry and depressed lately; Dean tells Hank that they are clones. But Hank being Hank, he embraces the knowledge and finds it positive. 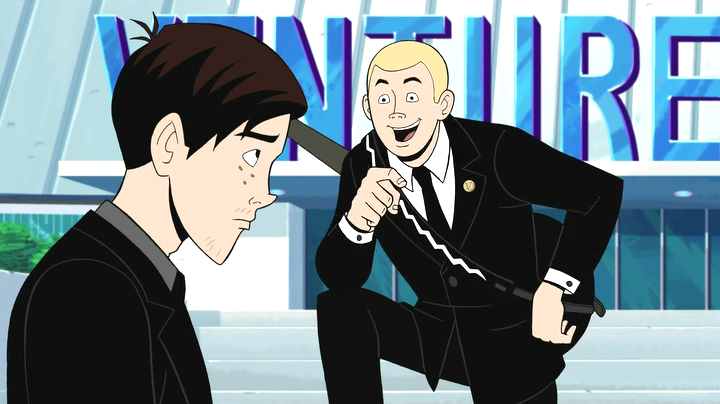 As stated in the introduction, this episode was good for a few chuckles but it seems like nothing really happens. The moment where Dean reveals to Hank that they are clones really fizzled out to me. Also, the seeming death of Dr. Venture, one of the shining plot points in last week’s episode, was voided almost 5 minutes into this episode. It’s not my place to say whether killing of a main character would be a better or even logical choice, but I thought Messrs.’ Hammer and Publick were doing something very bold. I really wanted to see where that plotline went; instead, you find out all it did was bump Dr. Venture’s head and dislocate his hip.

I’m starting to wonder if their decision to make tonight’s episode was a mistake and they should have ended this season with “Bot Seeks Bot.” Regardless, I really hope Doc Hammer and Jackson Publick pick up the slack in time for next season. 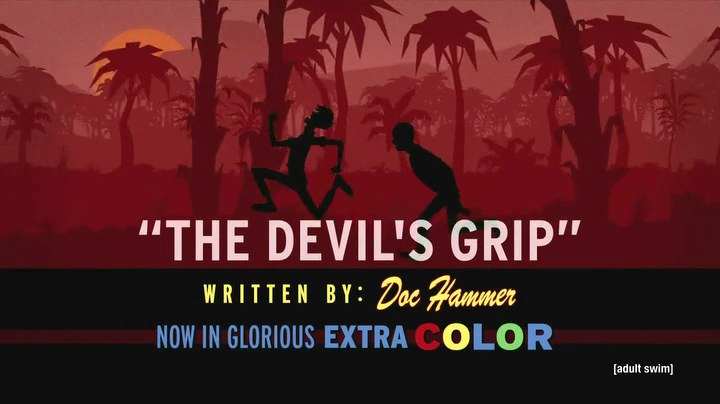 Until next season, GO TEAM VENTURE!