As soon as I saw the preview to this episode I thought, “YES! IT’S GOING DOWN!”

You see, if you’re a Venture fan at all you have to love Brock Samson. He’s one-half Swedish, one-quarter Polish, and one-quarter Winnebago murder machine.

He goes by many names; the “Walking Swedish Murder Machine,” “Murderist Extraordinaire,” and “Super Kill-Guy.”

He’s the greatest silent hero since Norman from Mighty Max.

And tonight he’s the focus of Episode 5, O.S.I. Love You. 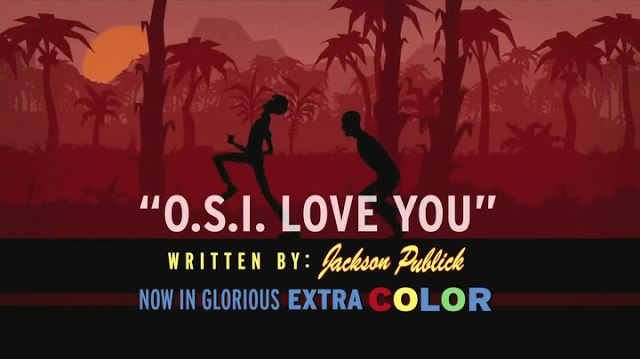 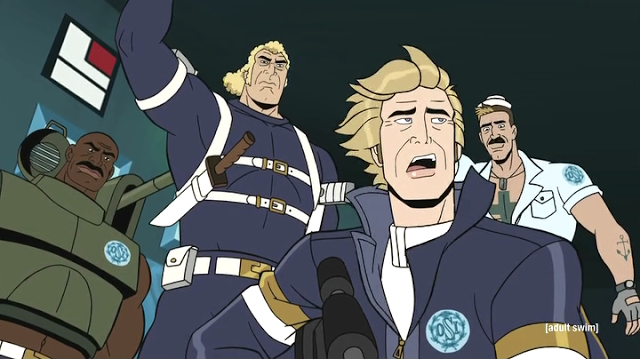 Episode 5 opens with a flashback of Brock, Shore Leave and a team of O.S.I. agents (including newbies “Headshot” and “Amber Gold”) about to take Monstroso and Molotov into custody. When we last left Brock, he was heartbroken after finding the love of his life, Molotov Cocktease, saving her new beau Monstroso by reversing a limo off the side of a cliff to fake their death.

We flash to the present and find both the O.S.I. team and the Ventures being interrogated by Mr. Frost, Mr. Sample and Master Yourname (Yourname not being a full-fledged “Mister”); agents for O.S.I.’s internal affairs division. Apparently, Molotov and Monstroso disappeared quickly after the O.S.I. captured them and the Misters are trying to find out if they anything to do with it.

During the interrogation it’s revealed that the Ventures (Dr. Venture, Hank, Dean and Sgt. Hatred) were on the Hoverquarters at the time of the disappearance trying to correct Hatred’s giant double-D problem. The O.S.I. doctors assume the Hatred’s large breasts are a consequence of taking “Nomolistal,” the prescribed drug meant to combat any side-effects from the Super Soldier Serum Hatred took in 1988. 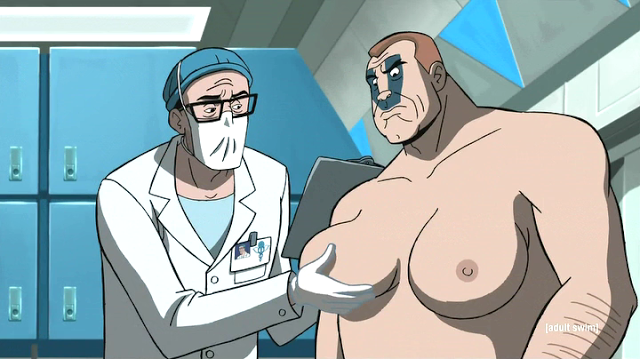 It was in 1986 where Brock met Molotov. One of is first assignments with the O.S.I. was to sniff out a legendary assassin, “The Siberian Husky,” at the Goodwill Games. Brock was able to stop The Husky, but not before encountering Molotov (revealed to be The Husky’s daughter) and losing his partner. 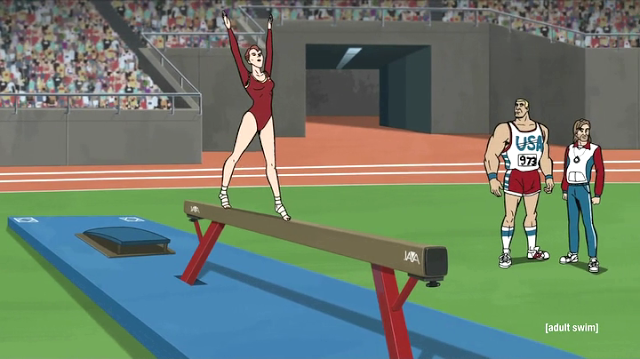 Brock continues his interrogation by revealing what he and Monstroso discussed during Monstroso’s imprisonment. Monstroso first assured Brock that he’s a dead man in O.S.I.’s custody. 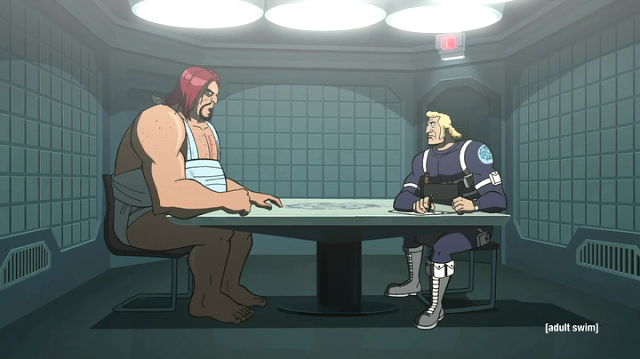 Then he confirms The Sovereign (head honcho of The Guild of Calamitous Intent) is NOT David Bowie; word is that he is a shape shifter (who’s real face may or may not be on the cover of Bowie’s Diamond Dogs). Monstroso continues with information about The Council of 13, the high ranking members in The Guild who handle most of the day-to-day issues. Although The Guild disguises their true identities, Monstroso recognized Council member number 4 as “Clue Clown.”

While on the Hoverquarters, Dr. Venture decided to give Dean a tour of his old lab on the facility that is now inhabited by two “Primos,” Minority Report-style precognitive subjects. Dean, knowing that he is a clone, immediately connects with the two scared siblings and decides to help them escape. 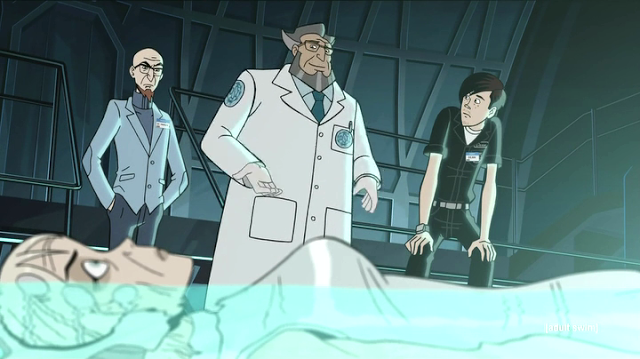 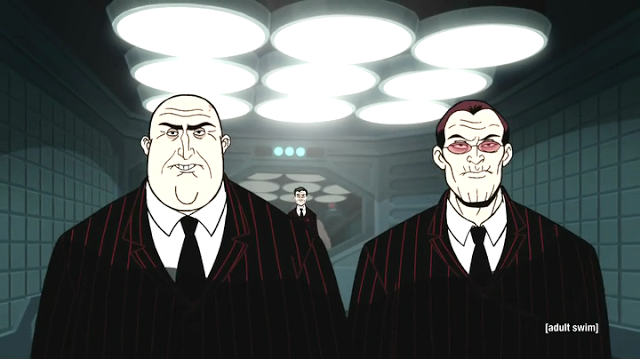 They enter Monstroso’s interrogation cell and quickly murder him by phasing the giant through the Hoverquarters’ wall and dropping him to the ground below.

Quickly defeating the majority of O.S.I.’s agents, Molotov makes her escape but is momentarily stopped by Hank and his wildly feminine strength suit. As expected, she leaves Hank a sorry heap and takes off in the suit. 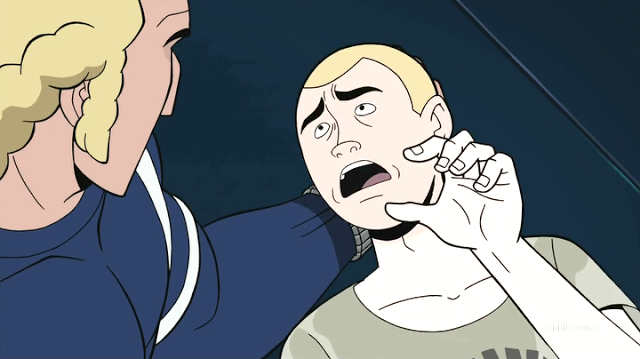 And we’re left with the confrontation we’ve been waiting for: Brock and Molotov. Molotov tries to evade Brock by jumping through the launch bay doors but Brock doesn’t let her off so easy; he tears after her in one of the O.S.I.’s attack jets, blasts free using the ejection seat, gets picked up by H.E.L.P.E.R., rides the hull of the X-1, and finally tangles with Molotov on one of the Hoverquarters’ turbines. 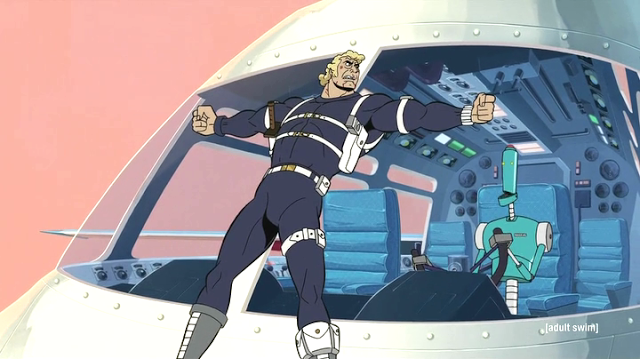 It’s here that we return to the present and Hunter Gathers showing the Misters CCTV footage of Brock throwing Molotov into one of the turbines. Seeing the footage, the Misters are left to assume the O.S.I. did everything they could to stop the situation. 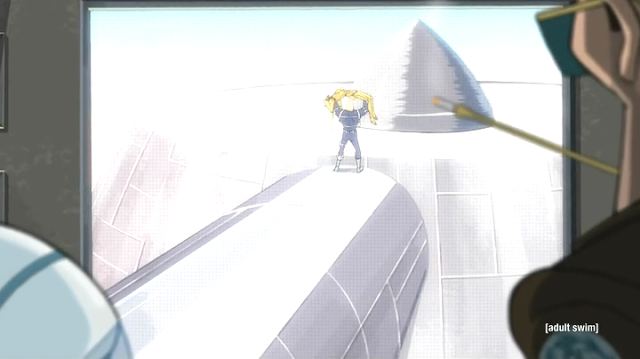 But, as always, Hunter Gathers has an ace up his sleeve.

In reality, Hunter stops Brock before he throws Molotov to her death. He explains that Molotov is a double agent, working for Hunter to take out a number of Guild spies peppered within O.S.I. The video shown to the Misters is really Brock throwing the strength suit into the turbines.

Just as things settle down, the real Mr. Frost and Mr. Sample make their entrance. Hunter and the rest are left wondering who interrogated them all day. We quickly find that it’s The Investors using an unearthly disguise. They slowly phase into the floor and disappear from sight right before the O.S.I. team get a chance to catch up to them. 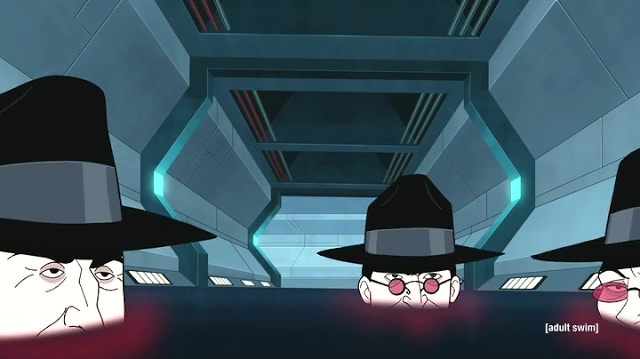 This episode was so chalk-full of action it spanked your mom, punched your dad and threw you through a window.

However, what REALLY impressed me was that through it all the story had some real movement. We saw Dean deal with his angst about being a clone, some light being shed on Sgt. Hatred’s super soldier serum, an explanation of what Hunter Gathers was doing with the Black Hearts at the end of last season, and the return of The Investors.

All I’m left with is a hearty thank you to Doc Hammer and Jackson Publick for a great episode.