You know the end is near when Saul shows up to a police station with his comb-over poorly composed, revealing the extent of his hair loss.  When he extracts Jesse from Hank’s interrogation — picking up where last episode left off — his hair hasn’t been evenly distributed across the dome of his head; it’s clumped together in several large strands, revealing his baldness.

Despite his good timing, Jesse didn’t need the help. Hank tries to flip Jesse, accurately assessing that he and Walt are on the outs, but Jesse still holds a grudge against Hank for beating him up in season 3 over the fake emergency call about Marie (which Hank now realizes Walt was behind); he’s not going to talk to Hank.

After Jesse is released Walt calls a meeting between the warring families — Hank & Marie and Walt & Skylar at the fauxist of faux Mexican restaurants. 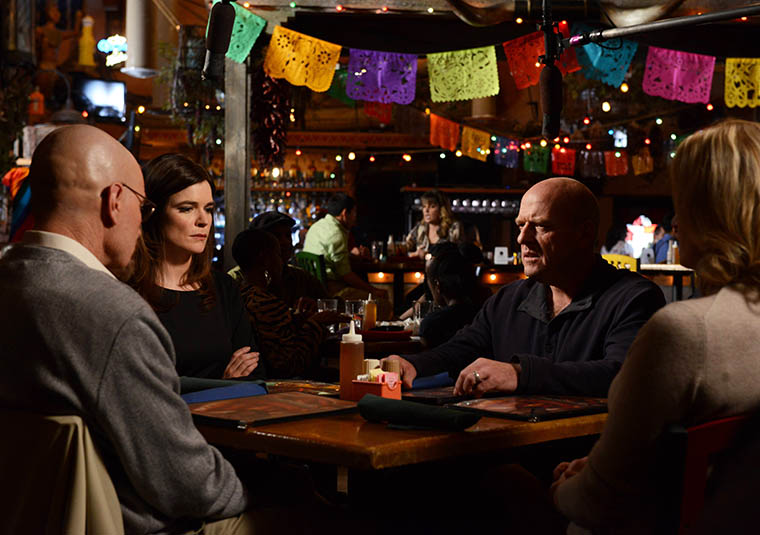 I couldn’t help think that the location represented both the absurdity of the situation — a high school teacher turned meth drug lord meeting with his DEA brother-in-law to try and come to terms with his criminal activity — as well as of the facades and dualities on the show. Both Hank and Walt see themselves as macho tough guys — like gun slingers — but they’re not (and I love how in the next scene we see the large painting of gun fighters in Hank’s house). 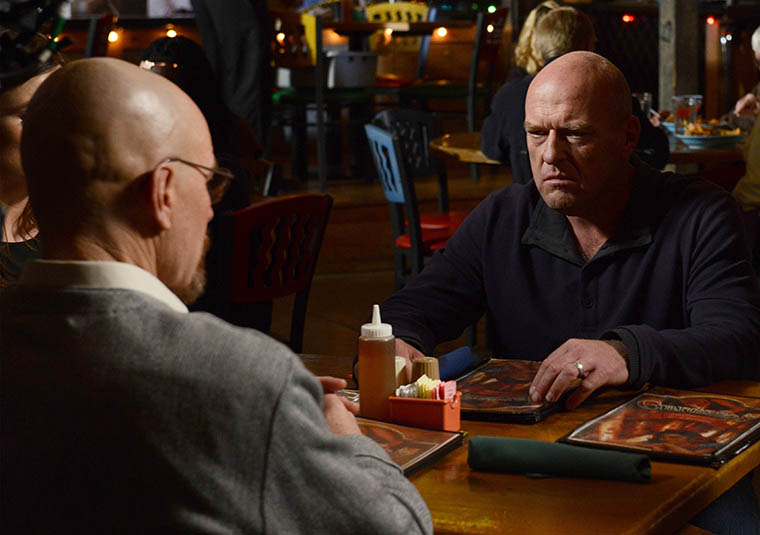 At the meeting Walt plays the Walt, Jr. card, suggesting that Hank and Marie look the other way for his sake because learning the truth about his father will be devastating. Marie offers a counter proposal, that Walt just kill himself — if he’s going to die, get it over with now. She’s got a point, and it’s probably the only way that Walt can protect his family and allow them to keep the money.

But Walt has another plan. 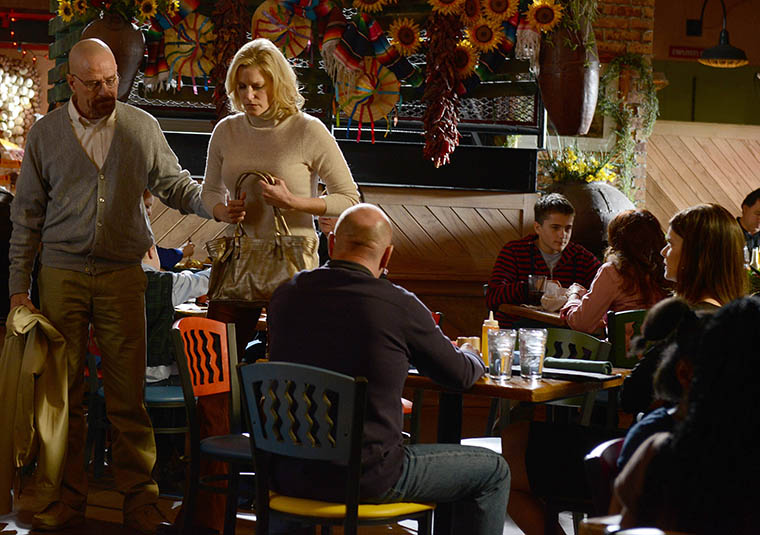 Walt’s hatches a go for broke scheme to shutdown Hank’s investigation by recording a “confession” where he implicates him in his drug empire.
Specifically, he claims that Hank is really the drug lord, that Walt has been working for him the whole time. Hank’s impulsiveness again comes back to bite him when Walt points to the bruises on his face that Hank gave him as evidence of Hank being an abusive boss. Walt also seems to have correctly gauged how concerned Hank is with his image. Marie, again the voice of reason, suggests that he show the video to his DEA colleagues to “get ahead of it,” but Hank just wants to minimize the tarnish to his reputation, deciding to keep going at the investigation on his own.
Phase 2 of Walt’s plan is pacifying Jesse.
In a desert meeting Walt pulls the fatherly advice routine on Jesse, suggesting that Jesse get a new identify and disappear, that he’s envious Jesse can do this. Jesse calls him out on his manipulation and asks Walt to just be honest about what he wants for once — he wants him to leave town or die so he cannot testify against him. But rather than admit his insincerity and ask Jesse to leave town, he hugs him in what seems like an authentic moment of affection. 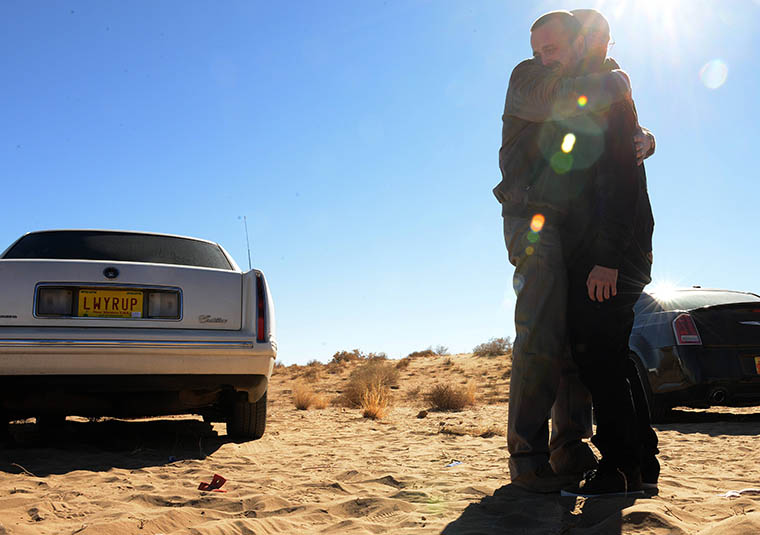 And it works, at least momentarily.

Just moments before getting into a car to start his new life, Jesse pieces together the switcheroo with the cigarettes and ricin from Season 4, and that Walt was really the one who poisoned Brock.
Ironically, the revelation came about from Saul having Huell lift a bag a weed of Jesse’s pocket. I say ironic because I think that Saul is the one person who really has been looking out for Jesse — with Mike dead, he’s the closest thing to a genuine father figure — something that he’s been searching for since the start of the show. Saul tells him that he cannot show up to the guy who will give him a new identity with any hint of drugs on him, but I think there is more going on there.
I believe that he really does want to see Jesse to go off into the sunset and is well aware of his drug history, that now is the time when he has to be sober and cautious. 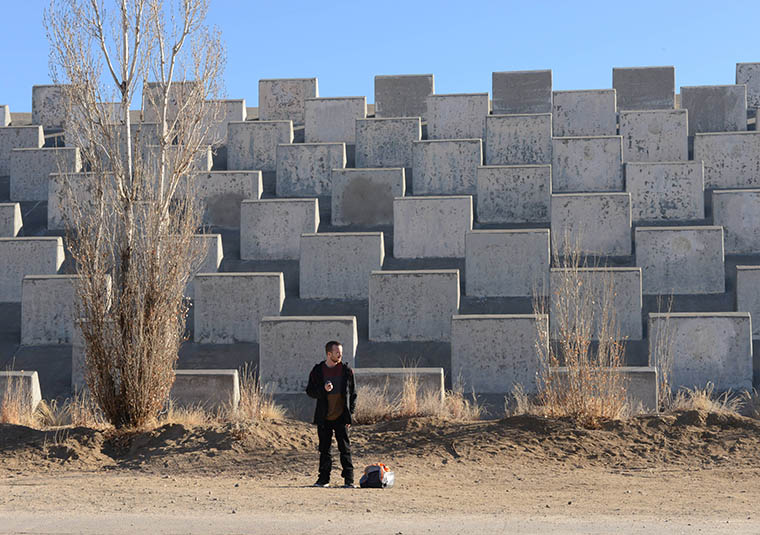 Notice how Walt has never said anything in the past about Jesse drinking alcohol after leaving rehab — taking the weed was a gesture that Walt could have done but never did. He permitted and participated in behavior (drinking with Jesse) that could cause a relapse. And it was actually Mike and Gus who helped Jesse stay clean after rehab.

When Saul informs Walt that Jesse knows all about them and the recin, Walt prepares for a gunfight. But as outraged as Jesse is, he doesn’t seem intent on killing anyone. Instead, the episode ends with him going to burn down Walt’s house, which now explains the flash forward.
I don’t think anyone predicted that.