This is the first installment of my new regular comics feature here on Forces of Geek.

The comic book industry can be tough to keep up with, like a treadmill someone else is controlling from a back room somewhere.

Cosmic Treadmill may keep you up-to-date with news about exciting creator switches, new book announcements, company wide events or the coolest Kickstarter announcements.  Sometimes, the treadmill might go back in time to look at master works of the past (ahem, Jack Kirby or Wally Wood for instance!), back issue bin finds and also reviews of Comic Con trade paperback finds from the weird to the wonderful and the bizarre. There is no place on Earth and Time where this may not go. We will stretch across the universe and cross-time alternate universes while our little legs keep pumping along.

We hope you can keep up!

You may be able to tell, we’re Flash fans. 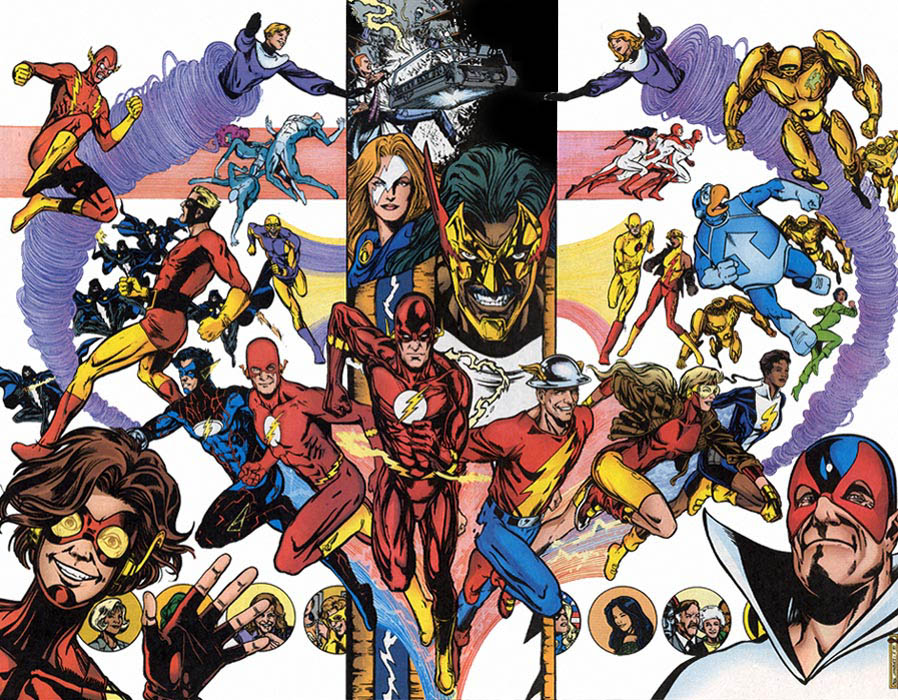 From Geoff Johns and Ethan Van Sciver in 2009’s Flash: Rebirth all the way back to classic Carmine Infantino and Joe Kubert’s 1956 Showcase #4 we look at the world differently when you can imagine popping out the red suit from your ring and running to save the world in the blink of an eye. 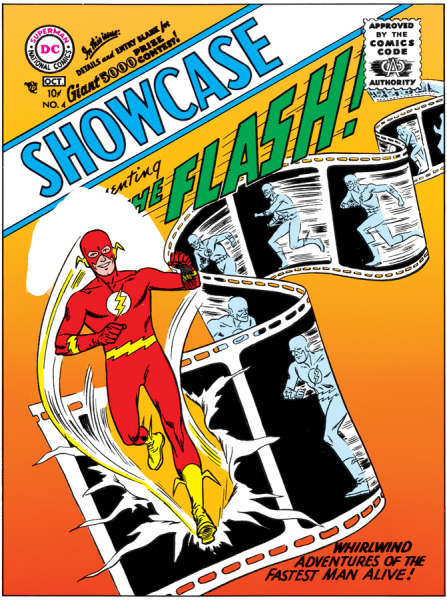 Barry Allen was resurrected as the current Flash, to the chagrin of many Wally West fans. Allen was at the center of the New 52 reboot at DC comics in the 2011 comic book event series Flashpoint, recently adapted into DC Comics’ most recent animated movie, Justice League: The Flashpoint Paradox.

My favorite Barry Allen? Its not the recent Justin Chambers (Justice League: The Flashpoint Paradox), and its not the current Francis Manapul, Brian Buccellato run (though, this is amazing, check out the trades!).

My favorite Barry Allen is former Guiding Light actor John Wesley Shipp protecting Central City in 1990-1991’s The Flash live action TV show! This is a rare find on the eBay market, the whole series was collected in 2006 in a 6-DVD set. 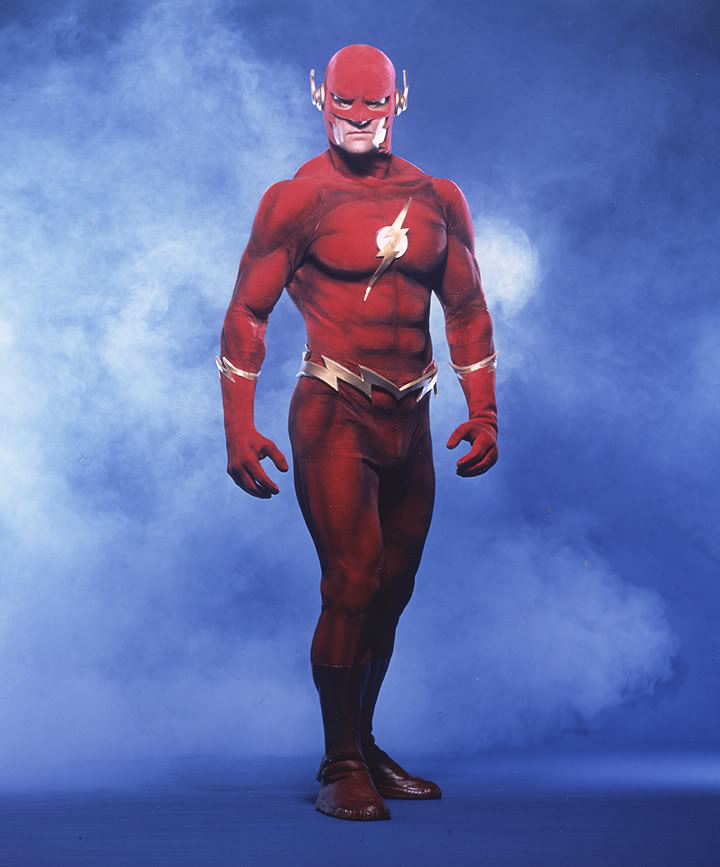 Geeks/Nerds, whatever you call yourselves these days (though certainly not Trekkies) will surely squee with delight over Mark Hamill’s appearance (pre Batman:TAS) as Flash rogue The Trickster, David Cassidy as Mirror Master and also attractive British co-star leading lady Amanda Pays!

Warner was riding high on the Burton Batman movies and brought this to the small screen, for reasons not too clear to me. My VHS copies are worn thin to this day, and most episodes were captured on to tape for repeat viewings and a custom red marker label with a lightning bolt.

I was a teenager, not grown out of comics just yet, and more of a Marvel kid. The appeal of the show was watching Shipp maintain his secret identity, watching him clean his apartment before Tina McGee (Pays) came to visit at superspeed. Man, even watching the guy eat 3 boxes of cereal on speed up film was so cool!

Central City design was very Noir, not like the Burton’s Gotham, but more like the East Coast version of Hollywood in The Aviator or The Rocketeer. The Flash did patrol at night, and there were plenty of capers at S.T.A.R. Labs to have intriguing dark shadows and looming in the doorway. 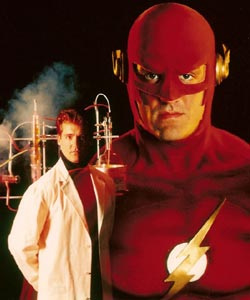 I’ve seen episodes recently (though the Netflix DVD program) and boy do they hold up! Like watching entire superhero movies you never know existed! Comic creators Danny Bilson, Paul DeMeo (screenwriters of The Rocketeer movie) and Howard Chaykin all had a hand in writing the show as well.

As with most good comic stories in TV or movies, there are plenty of easter eggs, names of buildings being famous creators, etc.

Late last month, rumors started to jog around about The Flash being resurrected for TV.

While we can’t go back home again (I’ve been asked not to go back too often, I keep taking VHS tapes). It turned out, that those rumors were true! Barry will appear in 3 episodes of the second season of the Green Arrow series, Arrow, before sprinting into his own show.

I embrace this action, wholeheartedly. I’m admittedly not a fan of the acting on Arrow but branching out the DC franchise back on to the small screen with live action is a good move. I’d only be sad not to see Flash on the big screen where he belongs. Kids love the Flash.

Let’s see whomever they pick do a classic Flash race against new Superman Henry Cavill! 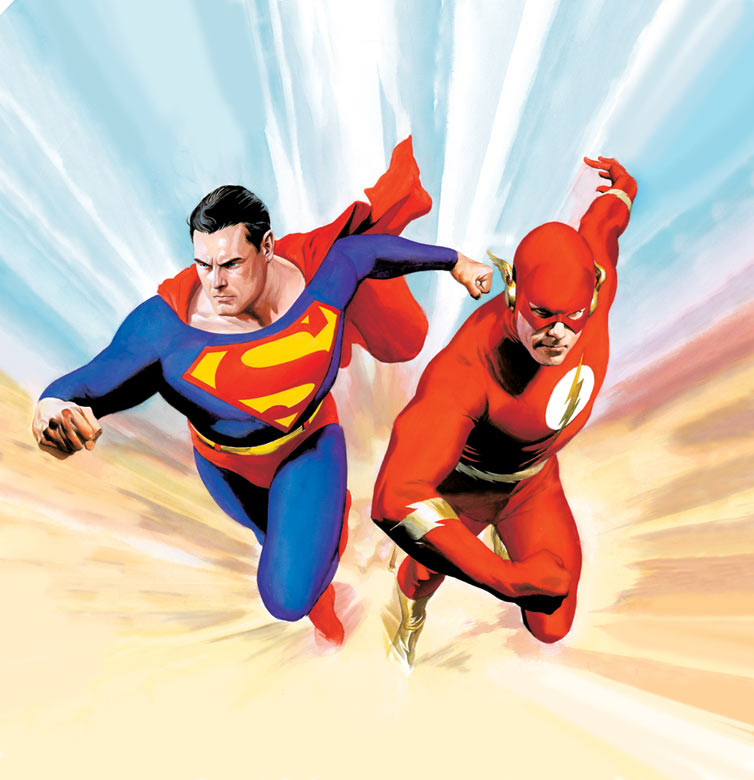 The Fastest Man Alive might not have been able to outrun cancellation on 90s TV, but in the days of CGI and comic book superheroes dominating all media, I will be excited to see Barry on screen again in the new show.

Time to lace up and hit the concrete. See you next time!