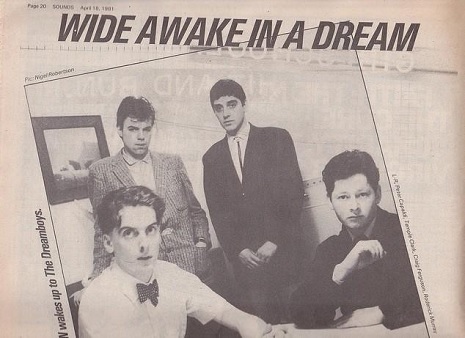 So, this little tidbit concerning the new Dr. Who Doc, Peter Capaldi, is starting to make it’s way through the series of tubes called the Internet and I thought you might like to know about it.

It seems that back in way early 80’s when Capaldi was an art student he was the lead singer in the Scottish post-punk band called Dreamboys with comedian and The Late, Late Show host /comedian Craig Ferguson.

While they weren’t a big hit, I’m pretty sure Whovians will start scouring the universe for MP3 of their songs Outer Limits, Bela Lugosi’s Birthday and Shall We Dance creating the need for a reprint of their album.

And, lucky for you, someone made a few YouTube videos of their songs for you to enjoy.

The quality of the videos?

Kinda terrible but the Dreamboys sound is pretty bitchin’.

I guess the newest Dr. Who might not be so bad after all.

Videos after the break.

In this article:Celebrity/Gossip, Dr. Who, Music, Punk