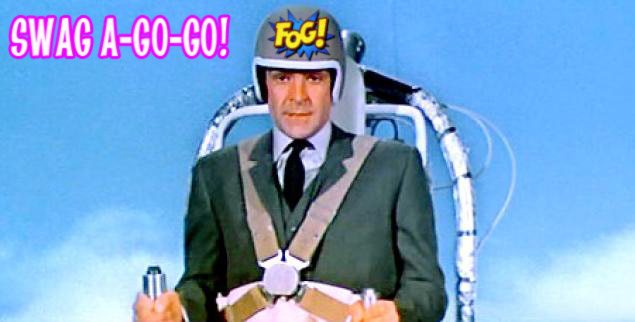 Here at FOG! HQ lots of cool stuff comes in, giving us the opportunity to check out some merchandise, that to be completely honest, we think you should check out!

This time out we’ve got a bunch of t-shirts (a necessity, especially when they are this cool), a unique addition to any pop culture lovers couch, an iPhone case you might fall in love with and a laptop case that is sure to impress. 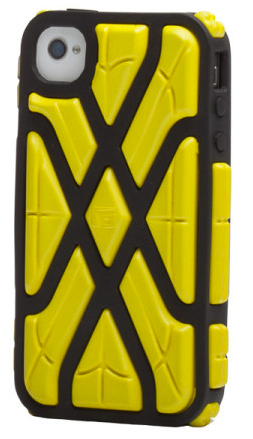 I’m paranoid about breaking my iPhone.

As amazing a device as they are, they are ridiculously fragile, which is why I was excited to try this case.

Prior to this I used an Otter Box Commuter which claims to be indestructible and thankfully offers a full replacement warranty it’s first year.

Keep in mind, I’m not dropping my phone from a construction site or kicking it, just the occasional fall off of the desk.  Thankfully, the phone is in terrific shape, but the same thing can’t be said for the case.

As for the G-Form X-Protect Case, I’m pretty impressed.

It’s considerably less bulky than the Otter Box, but seems to be as good a protector and rather than being assembled out of “indestructible” plastic, it’s a patented foam that becomes unbreakable and shock absorbing upon impact.  The only downside is that the yellow foam has the color applied and it rubs off revealing the black foam underneath.  I recommend going with a solid color.  Highly recommended, especially if you are as paranoid as I am. 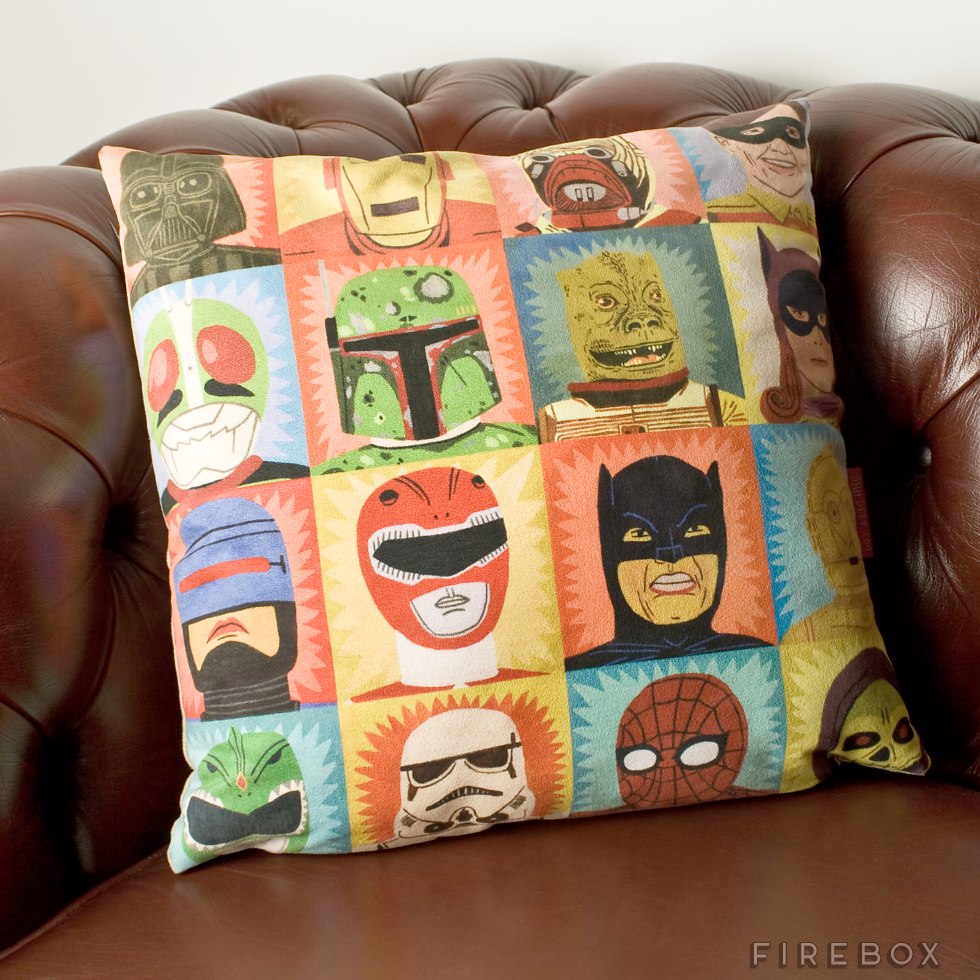 This awesome cushion is without a doubt one of the coolest items on the planet.

And since it’s unlicensed I can tell you that Darth Vader, Iron Man, a Tusken Raider, Burt Ward as Robin, Kamen Rider, Boba Fett, Bossk, Yvonne Craig as Batgirl, RoboCop, Red Power Ranger, Adam West as Batman, C-3PO, The Green Power Ranger, a Storm Trooper, Spider-Man and Skeletor are not depicted on it.

The perfect item for your own home or for your geek friends.

And, it’s soft and cuddly.

(Sample provided by Firebox, Home of The Coolest Things You Can Buy) 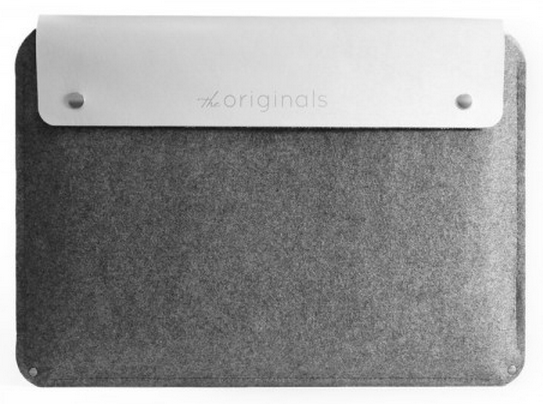 A truly beautiful Macbook Pro sleeve that almost qualifies as a work of art.

Made from heavy wood felt and leather, this case includes enough space for some papers and peripherals, and it’s simplicity is only matched by it’s elegance.  It’s water repellant and two heavy snaps keep the sleeve closed when traveling.  It’s a step up from any other sleeve on the market and ideal for any professional environment, or if you’re like me, it’s impressive enough to fool people into thinking I’m a professional.

And it’s available for virtually every Mac product including all laptop styles, iPhones, iPads and touchscreen gloves) 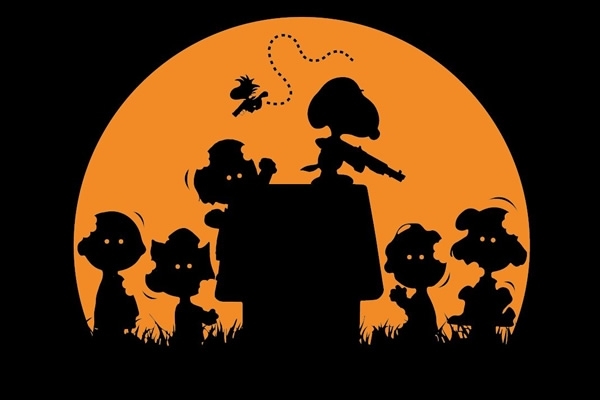 The ultimate Charlie Brown mash-up has the familiar characters as the undead battling Snoopy and Woodstock as they protect his doghouse.

This parody shirt is sweatshop-free American Apparel made and printed in the USA and is 100% cotton.

Good grief!  This one might be called “The Red Baron Versus The Walking Dead”! 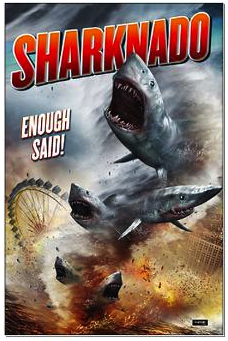 Sharknado is the phenomenon of the summer and proof that a bunch of CGI sharks can out act Ian Ziering and Tara Reid.  It’s not good, but it sure is fun to watch.

Among the items available are movie posters (like the one to the left) and an assortment of branded items including phone cases, flasks, mugs, various thermos’, cocktail shakers and more.

I’ve worn my Sharknado Cast and Crew T-Shirt and have been asked a half dozen times in an afternoon if I worked on the film.

And the wonderful thing is, you can claim pretty much anything and you’ll be believed.

“I was Tara Reid’s stunt double…”
“I wrote it on a dare.”
“I was the shark wrangler.”
“I got the manager of Best Buy to give Ian Ziering the weekend off to film it.” 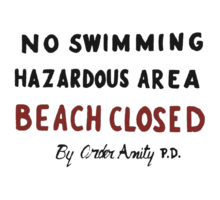 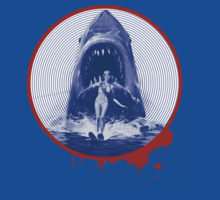 – Tracy Jordan
Sure, it was Tracy Morgan’s 30 Rock character that declared this, but there’s more than a little truth in this.
Shark Week might be over, but it’s a celebration that should last 365 days a year.  And fortunately, Redbubble carries an amazing selection of Shark Week-themed shirts every single one of those days.
And much to my delight, they have more than several Jaws inspired shirts, including the infamous Beach Closed sign (“Let Polly do the printing”) shirt as well as a psychotronic take of the Jaws 2 logo.
As you’ve read on here before, Jaws is my favorite movie so the more shirts celebrating this cinematic gem, the better.
(Sample provided by Redbubble) 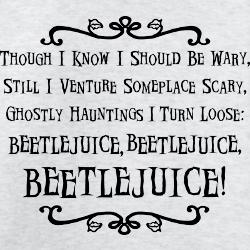 As a child of the Seventies/Early Eighties, I’m a victim of nostalgia.

I long for the merchandise of my youth and the kind folks over at Redbubble have a ridiculous variety of styles and themes.  I checked out the Beetlejuice shirt which replicates the incantation of the “Ghost With the Most” from Tim Burton’s cult film from 1988.  With an appropriate font, this shirt really captures the tone of the film. 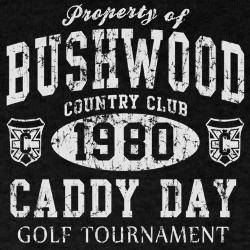 Another shirt that I love is the “Property of Bushwood Country Club 1980 Caddy Day Golf Tournament”.  This faux weathered shirt is the perfect heirloom of the golf tournament that Danny Noonan beat Tony D’Annunzio at earning the coveted Caddy Scholarship.

Whether you consider yourself a Judge Smails, a Ty Webb, an Al Czervik, or a Carl Spackler, this Caddyshack inspired shirt is a must have.