Breaking Bad never misses an opportunity to get Bryan Cranston to strip down to his tighty-whities. Again picking up where the last episode ended, Walt arrives at his home to find the rugs soaked in gasoline but no sign of Jesse — apparently changed his mind at the last minute about burning down the house (and this also means that we’ll have to keep waiting to find out how the house got gutted in the flash-forward).

To try and hide what happened from Skylar and Walt, Jr., Walt cooks up a convoluted story about a gas pump malfunction and taking off his gas soaked clothing inside the house.

Nobody believes it — Walt, Jr. thinks he passed out at the pump from the cancer, and Skylar knows that it has something to do with the meth business.

The one thing in life that Walt seems to feel guilty about is that he’s using the cancer with Jr. as a smoke screen to keep him from the truth. It’s clearly having an emotional toll on him, and Walt needs to keep inflicting the pain every time the meth business creeps into his personal life. 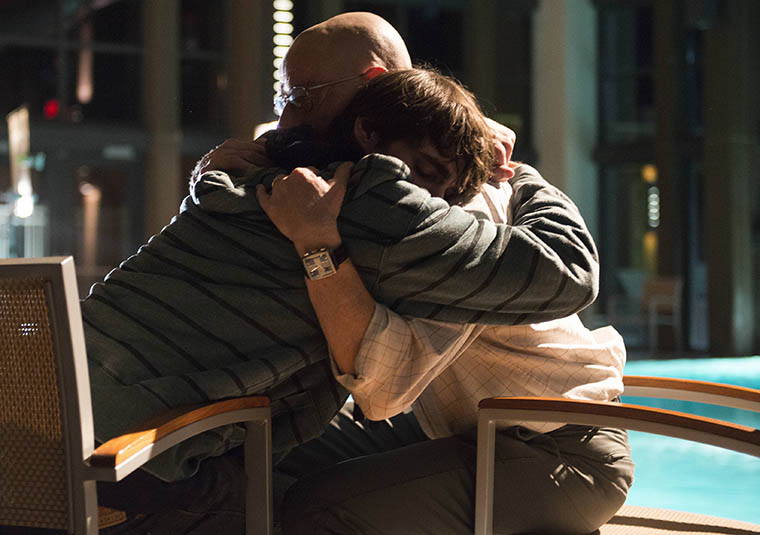 Jesse dumped enough gasoline in the house that Walter and family are forced to move into a hotel while the carpets are being replaced. In the hotel parking lot Walt and Saul discuss tracking down Jesse, which leads Saul to asks what they should do when they find him. Walt says he just needs to talk to him, to explain why he poisoned Brock — there’s a perfectly rational explanation for it. And if that doesn’t work, do we put him out to pasture like Old Yeller, asks Saul? Walt is outraged at the suggestion of killing Jesse — he’s a person, after all. 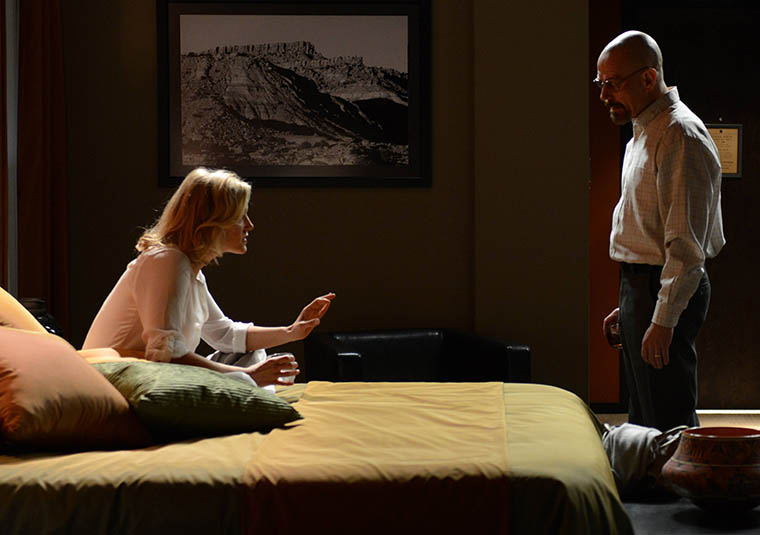 Back in the hotel room Skylar tells Walt that she knows he was just outside secretly meeting with Saul, and that the gas pump story is B.S. Walt comes clean, and again explains that he just needs to talk to Jesse. Like Saul, Skylar balks, and says after everything they’ve done, what’s so bad about killing just one more person to protect their family?

In a flashback, we then find out what happened to Jesse at Walt’s house. With a lit match in hand he’s about to set the house ablaze when Hank bursts through the door. Jesse tells him that Walt needs to pay for what he’s done, and Hank convinces him that if they partner up, they’ll do that. They leave together moments before Walt arrives at the house (where the episode began). 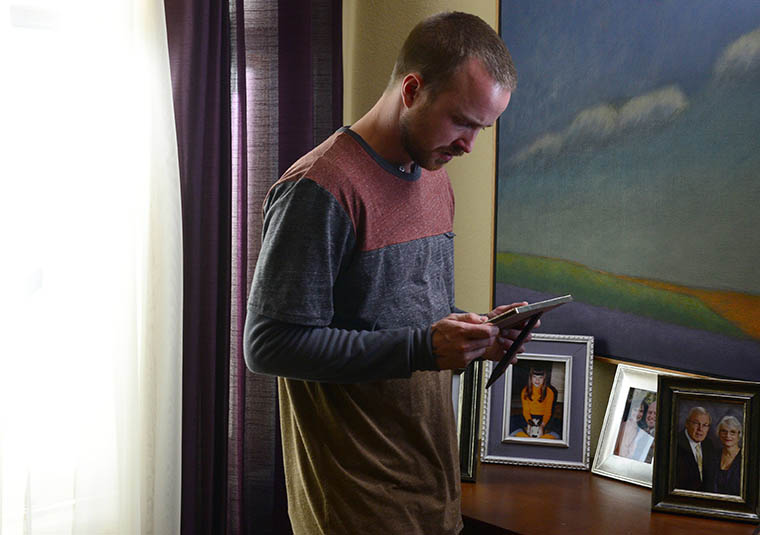 Hank takes Jesse back to his home while he plots his next move. Marie agrees to this house guest because it will help lead to hurting Walt — she tells her shrink that she’s been researching untraceable poisons — she wants vengeance just as much as anyone else. Agent Gomez is finally brought into the loop and helps Hank videotape Jesse’s confession about his criminal activity with Walt. The only problem is that there is no physical evidence. It’s Jesse’s word vs. Walt, and Jesse is hardly credible.

So it’s time for plan B. 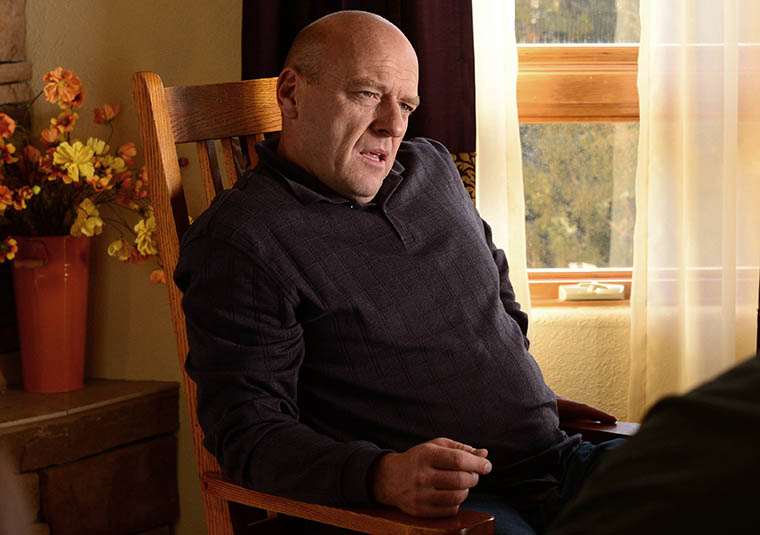 Without evidence, Hank needs to get Walt to say something incriminating on tape, so he forces Jesse to meet with Walt and wear a wire. Jesse initially refuses; he believes that Walt is just trying to drag him out into public so he can kill him. Gomez tells Hank that he agrees, he could see Walt doing that, but Hank doesn’t see the problem. Jesse is a screwed up drug addict; the worst-case scenario is that he does get killed and they capture the whole thing on tape. 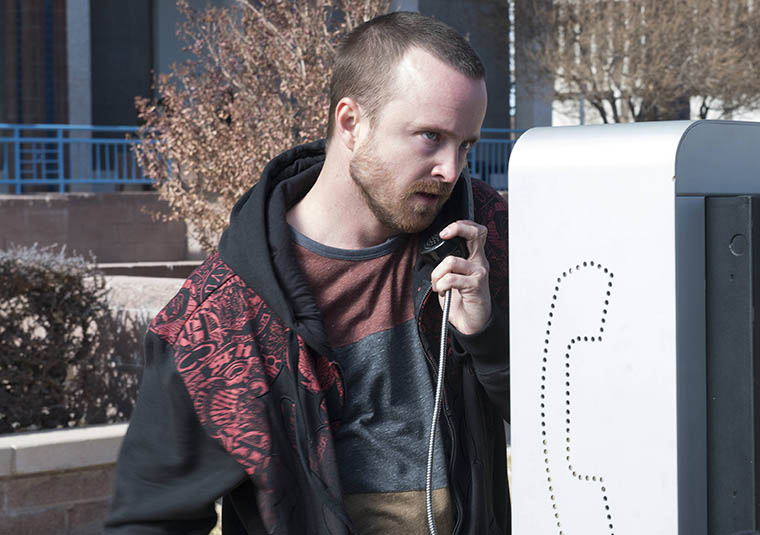 Jesse aborts the meeting at the last minute. While approaching Walt in an open-air plaza he spots a big white guy with a shaved head. That spooks him, he takes off, finds a payphone, calls Walt, and tells him that he’s not going to be fooled, and that he’s still coming for him, and this time he’s really going to make it hurt. Hank picks Jesse up, is outraged, but Jesse tells him he has a new plan. The episode ends with Walt calling up Todd, telling him he may need his uncle services again. For Jesse? For Hank? We’ll have to wait and see.

This episode was clearly about once and for all trying to come to a conclusion about Walt’s feelings towards Jesse. He rebuffs suggestions from Saul and Skylar to kill Jesse, and even Hank tries to make the case to Jesse that Walt cares for him, reminding him Walt killed those drug dealers, checked him into rehab, and that the manipulation was just to keep him in the business for his own good. But Jesse points out that you don’t poison someone you care about. And that’s really the central issue.

I think that Walt does have some genuine affection for Jesse — in some way he reminds him of his son — but some of his motivation for not killing Jesse in this episode is that he’s convinced there was a rational reason for poisoning Brock, and that if Jesse just hears the reasons, he’ll agree.

There are a few things going on here. First, it shows just how much of a cold-blooded monster Walt has become. It’s not just that murder is acceptable, but purposely causing collateral damage is ok for the sake of self-preservation. He’s given himself license to hurt anyone he wants.

Next, because Walt can easily manipulate Jesse, he assumes that Jesse’s sense of empathy is as impaired as his. His plan to poison Brock, blame it on Gus so to convince Jesse to help him kill Gus never factored in the emotional toll it would take on Jesse. He doesn’t think Jesse is capable of deep emotions. Or in another sense, sees him as subhuman. And this also reminds me of Walt letting Jane die. While she was an enabler, Walt again didn’t consider the emotional impact it would have on Jesse — Walt never considers that Jesse really loves her. So I would argue that everything positive Walt has done for Jesse has ultimately really been self-serving.

There are a few nice touches in this episode I have to quickly point out: