If you grew up in the Seventies, there wasn’t much difference between corporate mascots and entertainment.  Cereal, in particular, was home to dozens of characters, each with their own mythology.

Keep in mind, this was a time when it wasn’t unusual for holiday gift lists to be centered around McDonaldland characters.

Which leads us to the best combination since Mr. Reese mixed peanut butter with chocolate: Monster Cereals.

Combining the iconography of Frankenstein with Strawberry (Franken Berry), Dracula with Chocolate (Count Chocula), Ghosts with Blueberry (Boo Berry), Werewolves with Cherry (Fruit Brute) and Mummys with Orange Cream (Fruity Yummy Mummy) the monster cereals also had their own bonus twist to the breakfast table; cereal with marshmallows.

The monster cereals were discontinued a few years ago, only to reappear around Halloween season (Specifically Count Chocula, Boo Berry and Franken Berry).  This year, however, for the very first time, all five cereals are available (the cherry and orange flavors in Fruit Brute and Fruity Yummy Mummy) replacing the more generic fruit flavor).

You can get the more generic packaging anywhere, but the awesome retro packaging is a Target Exclusive.

After the jump, check out some recipes devised by the folks at General Mills.  I’ll be in the living room watching cartoons eating my Monster Cereal Munch.  Recipe after the jump. 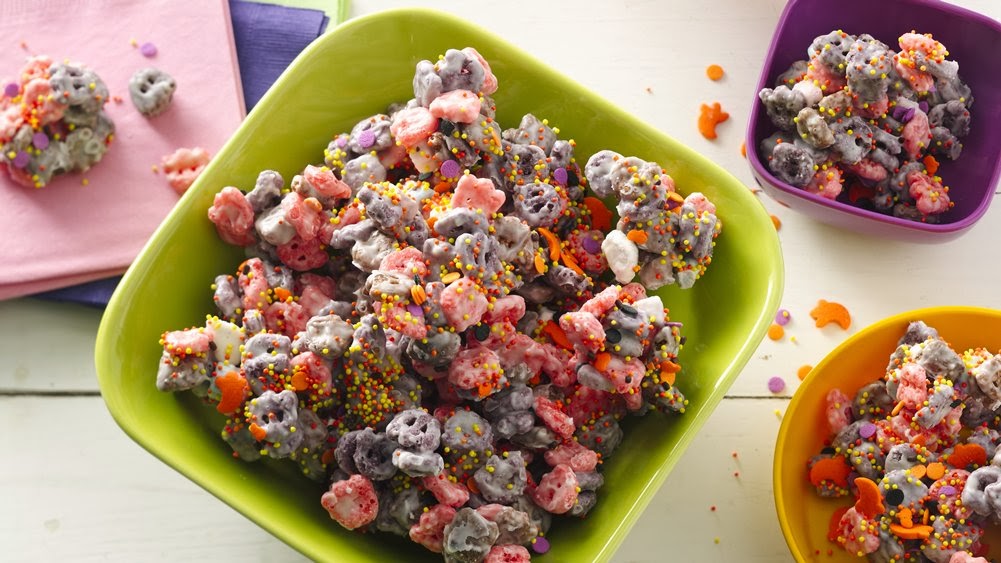 This easy cereal snack can be made up to 3 days in advance. Kids and adults alike will flip over the fun colors and tasty flavors.

Disclosure:  The product, giveaway samples and information have been provided by General Mills. All opinions are my own.