First of all, I’m happy to report that the IMAX 3D restoration of THE WIZARD OF OZ works. Actually, it amazes. The frame-by-frame restoration results in a picture that’s cleaner than ever, more vibrant, more detailed and, frankly, better looking than any film print I’ve ever seen on the big screen (and I’ve seen it countless times).

For years, THE WIZARD OF OZ was a staple of television broadcasting, reduced not only to the small screen, but usually shown from an inferior transfer that botched the sepia toned bookend and drained the technicolor of pizzaz.

But I thought I knew every square inch of picture and every note of sound from the classic movie. Seeing the IMAX 3D restoration proved me wrong.

Here are 7.5 discoveries, celebrations and a rant on the 75th Anniversary edition now in theaters…

1) This Re-Release is rated PG for 3D intensity… 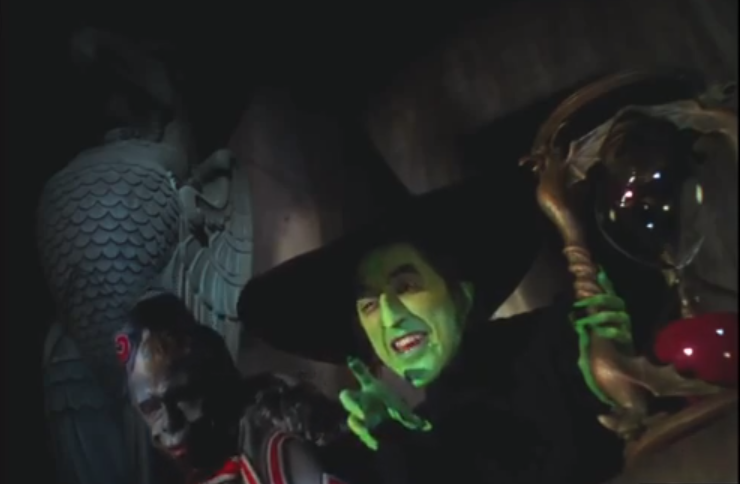 Not gonna lie. The cyclone approaching the Gale farm scared me as a kid watching it annually on television. This version brought back the terror, and in 3D no less. Still an astonishing practical visual effect from the early days of Hollywood.

When the gang sets off through the Haunted Forrest in hopes to obtain the witch’s broomstick, the Scarecrow packs heat. I have NEVER noticed this before, even in big screen viewings. Don’t let Spielberg know, or the 80th Anniversary edition is likely to CGI it out.

Perhaps given added depth via 3D, or more attention in IMAX, the establishing shot of the Emerald City is completely breathtaking. Actually, none of the background paintings come off as a dated film technique. Another testament to the production design and spectacle of this grand movie.

Forget any washed out publicity photo, merchandising tie-in or even previous DVD release. You’ll see so much detail in the make-up in the IMAX version that you can count the freckles on Dorthy’s face!

Bert Lahr was a great comedic performer, and this IMAX version allows you to see every detail of his facial expressions under that makeup. It’s genius, and the “King of the Forest” number, which always bored me as a kid, becomes a show-stopping blast now.

We all know it’s a cat that causes Dorothy to miss her ride home at the end of the film, but I’ve never really paid that much attention to the fact that Miss Gulch also has a cat. Toto, of course, is a “menace” because he chases Gulch’s cat in the pre-story, but what is it this film has against cats? Except of course, the big cat who becomes King of the Forrest, of course.

7) There’s No Hanging Munchkin in the Forrest

Debunked years ago, but always hard to figure out with previous muddy transfers and prints, is the myth of the hanging suicidal Munchkin in the Tin Man’s neck of the woods. In clear IMAX 3D, you’ll discover its just a wild peacock thrown into the ambiance from MGM’s animal collection. Not as exciting, but certainly as surreal.

Seriously, AMC? You had to add that extra fifty cents to the already inflated ticket price? Am I supposed to feel some sort of value that it’s not a $21 ticket? Do you realize I can buy the deluxe Blu-ray edition in a week for about the same price? Wasn’t the $4.50 you charged me for the bottle of water enough? Good thing the movie was worth it.