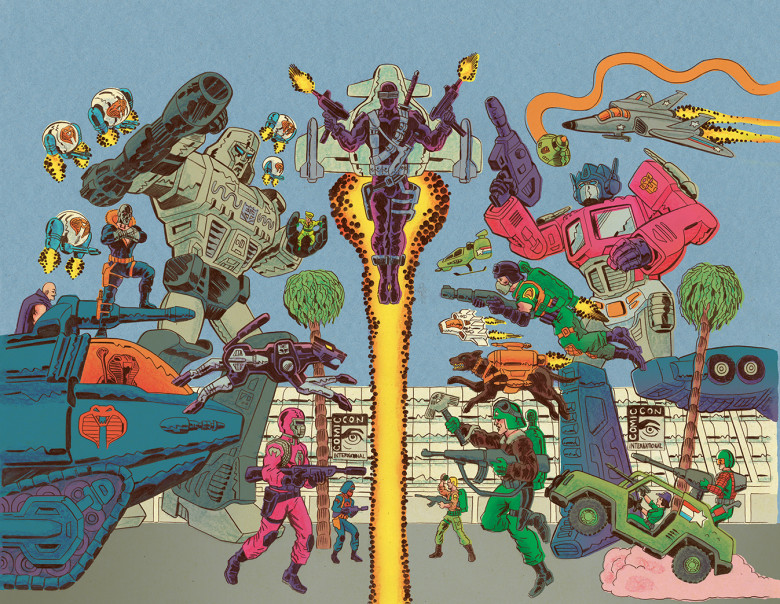 Two of the most popular comic book franchises of all-time, TRANSFORMERS and G.I. JOE, will be going head-to-head in a brand-new ongoing series debuting next summer! Written and drawn by comic luminary Tom Scioli (Godland, American Barbarian) with co-writer and TRANSFORMERS veteran John Barber (TRANSFORMERS: ROBOTS IN DISGUISE, FALL OF CYBERTRON), these classic characters will explode off the page like never before!

Based on the iconic Hasbro brands, this stand-alone series is set to explore the intriguing encounter between these starkly different teams. Cosmic in scale, the series will utilize Scioli’s unique artwork to traverse the perils of space and pit the G.I. JOE team against the ominous threats of CYBERTRON. Featuring the characters synonymous with both TRANSFORMERS and G.I. JOE this will be a team-up for the ages!

“This is a dream project for me,” says Barber, “and I’m blown away by the imagination and the unique take that Tom Scioli is bringing to this project. It harkens back to classic comic traditions—and to the origins of the TRANSFORMERS and G.I. JOE characters—but feels constantly, irrepressibly new!”

“This feels like the comic I was born to make,” says Scioli. “We’re asking big questions. Is war an inevitable condition of life? What is free will? What is the future of man and machine as the line between them becomes increasingly blurred? The G.I. JOE team is trained to deal with dangerous situations and this is the ultimate test of their training. The TRANSFORMERS characters push the boundaries of what shapes life can take in this infinite universe of ours. Perhaps it will be a machine that teaches us what it is to be human.”

Both brands have found immense success over the decades with action figures, feature films, cartoons, comics and more; and have each found unique and avid fanbases. With influential and iconic characters, the TRANSFORMERS and G.I. JOE brands are globally renowned as multi-media powerhouses.

“We’ve been waiting for the right opportunity for this event, and the anniversary of both TRANSFORMERS and G.I.JOE in 2014 is definitely the perfect time,” said Michael Kelly, Hasbro’s Director of Global Publishing. “We are very excited to be working with IDW on this project, and I for one can’t wait to read the next chapter of this adventure.”

The event of the year begins next summer only at IDW!