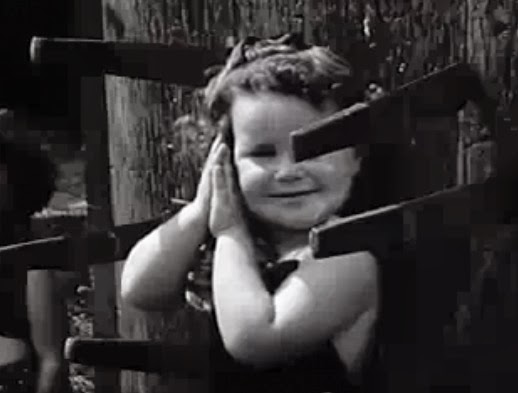 Back when I was being raised in the 70s, parenting wasn’t as insane as it is today. For instance, if a kid made it to the age of eleven without dying (or losing a major appendage) you were considered a good parent…that’s all it took. Nowadays, in order to be given a stamp of approval from society, you have to wrap your kid in protective bubble wrap, provide them with 24/7 surveillance and tell them how talented and special they are even though they can barely function in the world thanks to a constant supply of co-dependency and Ritalin.

But perhaps this look back at a time when moms could set up a sheet of plywood in the backyard, place their offspring before it AND THEN CHUCK KNIVES AT THEM, all for the amusement of the neighbors, will make you parents re-evaluate your overly-protective rearing methods.

After-all, if the kids of yore survived cutlery being thrown at them by a parent clearly hopped up on goofballs (thank you Mother’s Little Helpers), then I think your kids can play on the jungle gym without protective headgear.

Video of the mother chucker after the break.

What drives a man to dress his children as monsters, splatter them with homemade blood and share photos of the results with everyone he...

Teen Horror Films of The 50s

Not until the mid-late 1950s did Hollywood realize there was a distinct teen audience for edgy genre films. Historians usually credit Samuel Z. Arkoff...

RPG Gaming With Kids: A Preview for Me and a Report for You

As many of you likely read in the Washington Post or End-of-Times Magazine, I will become a first-time dad in less than two months....

Early this year, I wrote a piece about things I was going to be able to do once I had a kid. Things like...