For a twisty trip back to that odd time when Gothic Victorianism melded with Art Deco Modernism, check out some “Old Dark House” pictures from the 1920s, 30s, and 40s.

Spooky – but not necessarily haunted – houses are traceable at least as far back as Ann Radcliffe’s Gothic novels (1790s) or Edgar Allan Poe’s “Fall of the House of Usher” (1839).

But the films are derived most obviously from 1920s stage mysteries such as Mary Roberts Rinehart’s “The Bat” (1920) and John Willard’s “The Cat and the Canary” (1922).  Agatha Christie is an influence on the later films.

Historians sometimes consider D.W. Griffith’s ONE EXCITING NIGHT (1922) to be the first of these films, but it was THE CAT AND THE CANARY (1927) that defined the subgenre.  It’s a little like HALLOWEEN (1978) defining the slasher subgenre even though it wasn’t technically the first slasher film.

Dozens of Old Dark House films followed CAT AND THE CANARY’s success, most of them released in the 30s, many in the 40s, and a few in the 50s, 60s, or even later, though the latter-day releases tended to be parodies.

Most of the films are short – only about an hour – and quickly paced, if stiffly shot.

It’s notoriously difficult to define the subgenre, but we can at least describe it as a combination of mystery, horror, crime, and comedy.

1. AN OLD DARK HOUSE
This would seem to go without saying.  It derived from the necessity of stage plays being performed at a central location with a single set.  While the house itself gives identity to each picture, often functioning as a sort of mute character, it also limits each picture – so latter-day viewers like ourselves must be in the mood for static camerawork and repetitive staging.

The houses themselves are usually Gothic Victorian mansions.  The 1930s films tended to respect the houses, but later films (such as THE BLACK CAT, 1941) often denigrated the houses, sometimes having them broken or destroyed at the conclusions.  ONE BODY TOO MANY (1944) modernizes its house by adding an observatory at the top.

2. SECRET PASSAGES
This includes doors, tunnels, panels, revolving bookcases, you name it.  These passages might lead into a basement or dungeon.  They might (as in SECRET OF THE BLUE ROOM, 1933) even lead away from the house altogether.  Often, a gloved hand might reach out of a secret panel toward an unsuspecting victim.

3. MOTLEY CHARACTERS
Most Old Dark Movies have a large cast of characters, with some characters being very old (like the centenarian patriarch in THE OLD DARK HOUSE, 1932) or very young (with 18-year-old maidens a common type), some being rich, others being poor, some being European, others being American, some being country folk, others being city slickers.  TANGLED DESTINIES (1932) even features a Chinese traveler, treated respectfully by the script.

4. A STRANGE CREATURE
This could be an animal-like creature like a gorilla, bat, or cat.  Or it could be a ghost.  Often, the creature turns out to be a villain in disguise, like on “Scooby-Doo.”  If not a person, the creature may be revealed as a puppet or projection.  HOUSE OF MYSTERY (1934) is rare in featuring both a real gorilla and a guy in a suit.

5. A VOICE FROM THE PAST
This could be a figurative voice, like the words of a Last Will and Testament, or it could be a dire pronouncement from a hidden villain.  The voice (or villain) usually has some connection to a crime or secret or ancestor from a character’s past.

6. SCIENCE NOT SORCERY
While a few Old Dark House classics are supernatural, the vast majority ultimately offer a rational scientific explanation for the skullduggery.  In THE PHANTOM (1931), the heroine is threatened not with supernatural terrors but with a brain transplant!

8. COMIC RELIEF
Bumbling waiters or silly old housekeepers could provide comic relief, or snappy reporters could crack jokes.  Many of the films could be considered more comedic than horrifying.  Later films like William Castle’s OLD DARK HOUSE (named purposefully for the subgenre, 1963) were almost entirely comedic.

9. BAD WEATHER
You can safely bet on some thunder, lightning, rain, or all three to arrive before the movie is out.  ONE FRIGHTENED NIGHT (1935) even opens with a thunderclap.

I comment further in my Claws & Saucers guidebook, but I hope you’ll enjoy the comments and links here.  Note that my list emphasizes the more horror-oriented pictures, but you can find more comedic or more detective-type pictures if you prefer.

Preceding the archetypal CAT AND THE CANARY by two years, THE MONSTER is a sort of Old Dark House and Mad Scientist combination.  Lon Chaney plays the madman!  Our hero is an amateur detective trying hard to win the woman he loves.  Excerpts from his how-to-be-a-detective book work well as silent intertitles.

The cast is small, but the movie is an important Old Dark House prototype, featuring secret doors, thunderstorms, and other patterns that later became standard.  A year later, Chaney became famous for PHANTOM OF THE OPERA. 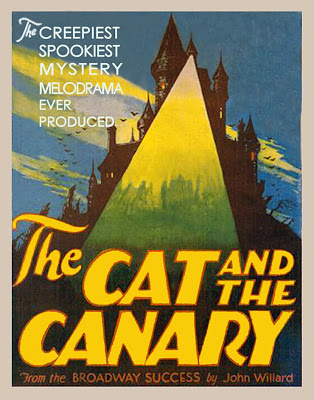 This silent standout from German director Paul Leni is so stylized that the camera does virtually nothing normally.  Even the title cards are stylized with swirly or dripping lettering.  One by one, we watch suspicious heirs arrive at the house to hear the reading of a millionaire’s will.  Little do they know that an escaped lunatic lurks in the shadows.  The hero is also the comic relief guy, which is pretty rare. 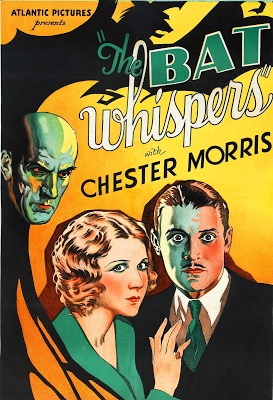 Although it’s probably the most overrated of all Old Dark House films, it remains essential viewing, if only because (a) the opening shots are Expressionistic, and (b) the villain with his bat costume was an inspiration for Batman.  The villain’s car even sends out a smokescreen like a proto-Batmobile (sort of).  It’s not a bad film, but be aware it is light on action.  It was remade, though not really improved, as THE BAT (1959, featuring Vincent Price). 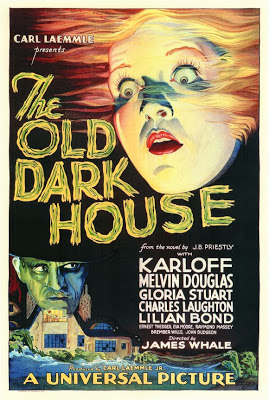 James Whale’s third-most-famous feature (after his two Frankenstein films) helped give the subgenre its name.  The house itself is rather plain, but the characters are the key; this is the most fully realized and developed group of characters in the subgenre.

You sympathize with several characters at once, and you wonder how they will fare when the house’s resident pyromaniac lunatic (a grunting Boris Karloff) breaks free of his confinement.  Who is crazy?  Who is honest?  Who will die?  Who will find love?  It’s a tight funny film that gets better with repeat viewings.  Gloria Stuart later made James Cameron’s TITANIC. 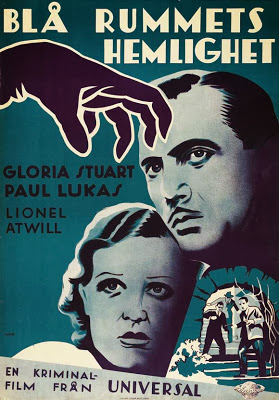 You know those haunted house stories where characters accept a bet to sleep one night in a haunted room?  Here’s an Old Dark House picture with a similar premise, but it’s three rivals for a young lady’s love.  Will any gentleman survive to win the maiden’s hand?  A Q&A sequence with a detective is too long.  But the deaths in the Blue Room are great.  It’s one of the more serious pictures in the subgenre.  Lionel Atwill is the stern patriarch of the house. 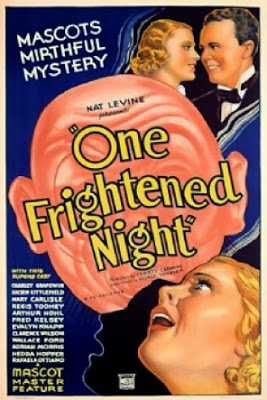 With CAT AND THE CANARY and THE OLD DARK HOUSE, this is the third truly great film in the subgenre.  Scene to scene, dialogue to dialogue… it’s nearly seamless.  The killer’s mask is very scary, but a wisecracking vaudeville magician is very funny.  It’s got style, and shadows, and surprises. 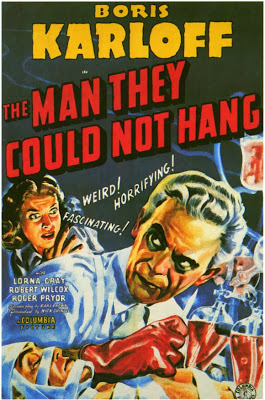 For its first half, this is almost a science fiction film, as our anti-hero doctor (Boris Karloff) develops an artificial heart contraption.  Then we enter Old Dark House territory, as the doctor invites his foes to his mysterious mansion and plots to kill them one by one.  He even provides each with a place card that lists the time each one will die!  It’s a mostly successful and very strange film. 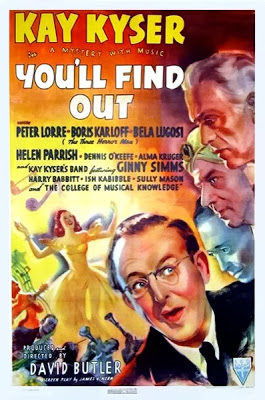 It’s an Old Dark House musical.  But somehow it works.  Boris Karloff, Bela Lugosi, and Peter Lorre all retain their dignity amidst the songs and silliness.  The dialogue is surprisingly intelligent.  Virtually no character is what he first seems to be.  Watch for a standout seance sequence.  The opening credits move across a radio tuner! 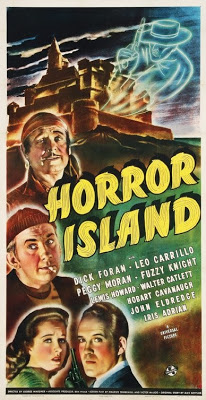 Though the house (or castle) gets little respect from the screenplay, it looks terrific on its little island.  Our characters take a boat ride to the island for a treasure hunt, but – wouldn’t you know it – a sinister “phantom” (who looks like The Shadow) is lurking in wait.  The plot and dialogue are surprisingly nimble for a film coming this late in the subgenre. 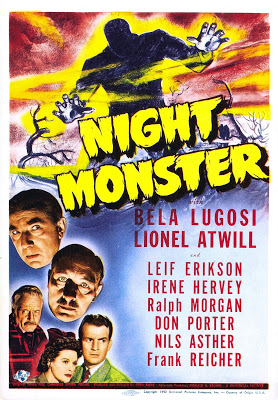 The style and atmosphere are thin.  The acting is weak, despite the presence of Bela Lugosi and Lionel Atwill.  But the story and concepts are so weird, that NIGHT MONSTER forces us to declare it an Old Dark House standout.  It’s one of the most supernatural of all Old Dark House pictures, blatantly championing Eastern Mysticism over Western Rationalism.  “All matter,” we learn, “is really cosmic substance in vibration.”

Two great parodies of the subgenre include MURDER BY DEATH (1976, written by Neil Simon) and DARK AND STORY NIGHT (2009, from Larry Blamire who also made LOST SKELETON OF CADAVRA).  William Castle’s famous HOUSE ON HAUNTED HILL (1958) is a partial parody.  A flawed but notable variant is HOUSE ON SKULL MOUNTAIN (1974) which featured a black cast in a voodoo house.