Mea Culpa for missing the Golden Globes, but I had a long rehearsal for my Who tribute show the next night that I couldn’t postpone – I’m also a singer for those who don’t know. And the show was a rousing success!

Okay, I’m now at my BFF Claire’s house to watch the show, she’s got a HUGE, digital TV so I can see every pore on Ryan Seacrest’s face! Yes, right now we’re watching the pre-game show in E!

Hey, it’s Kathy Griffin! She’s always super funny with Ryan, I love her because she doesn’t care about what people think – AND AFTER SIX NOMINATIONS, SHE FINALLY WON A GRAMMY! Hooray!

Okay, here comes MADONNA. SHE LOOKS LIKE SOMEONE PUNCHED HER IN HER RIGHT EYE, SHE’S WEARING GOLD FRONTS, WALKING WITH A CANE, annnnnnnd, she brought her adopted Black son David Banda with her. 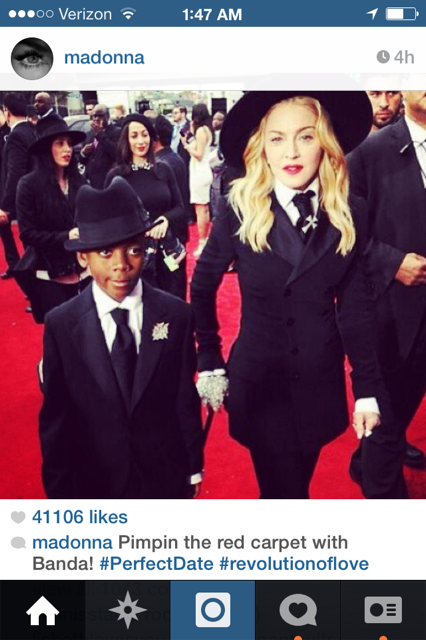 They’re both in matching B&W Dior Zoot suits. He said that he picked out the outfits for them both. She is looking straight up crazy – seriously, both of her eyes are puffy, and she looks a little drugged and out of it. She’s either had a stroke, or now has Bells Palsy. 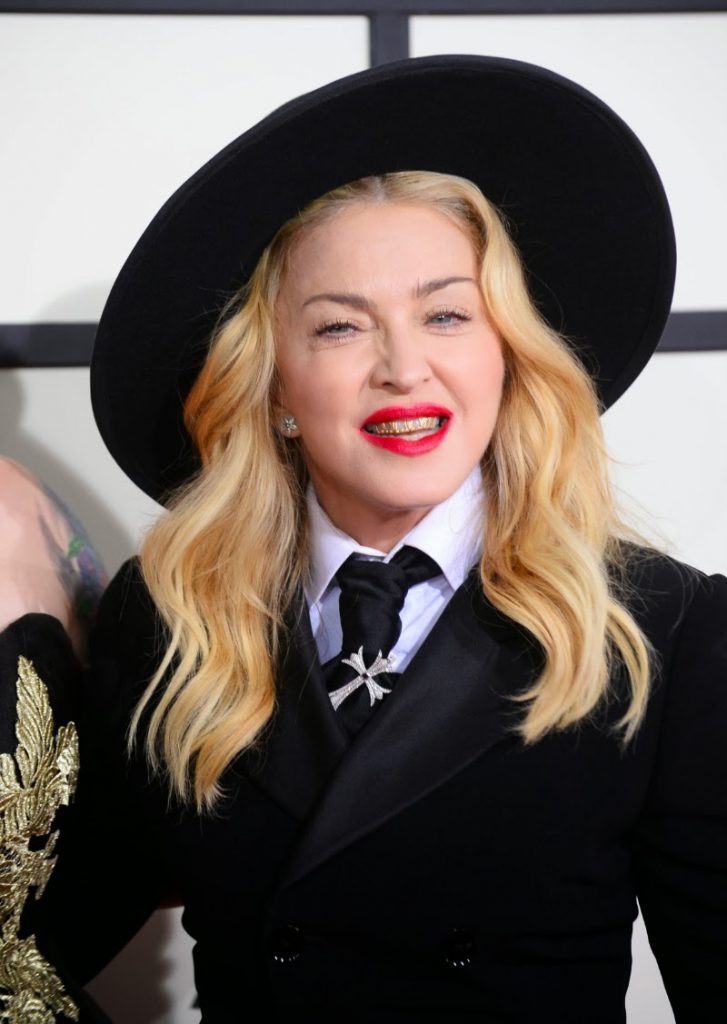 *** I JUST FOUND OUT THAT SHE WAS IN EITHER A SKIING ACCIDENT, OR A HIGH HEEL ACCIDENT. I’M GUESSING SHE’S ON PAIN KILLERS***

HEY MACKLEMORE, TONY ORLANDO CALLED, HE WANTS HIS TUX BACK. 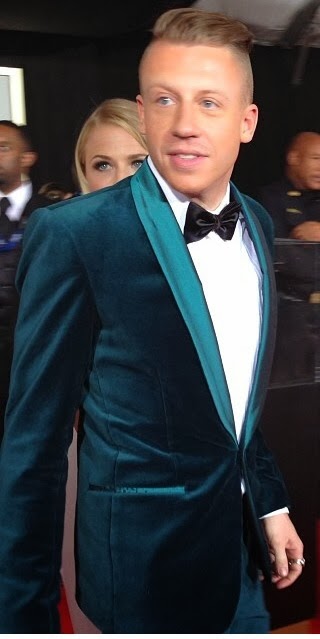 HOLY CRAP, PHARRELL WILLIAMS – WHAT THE FUCK IS WITH THAT HAT? 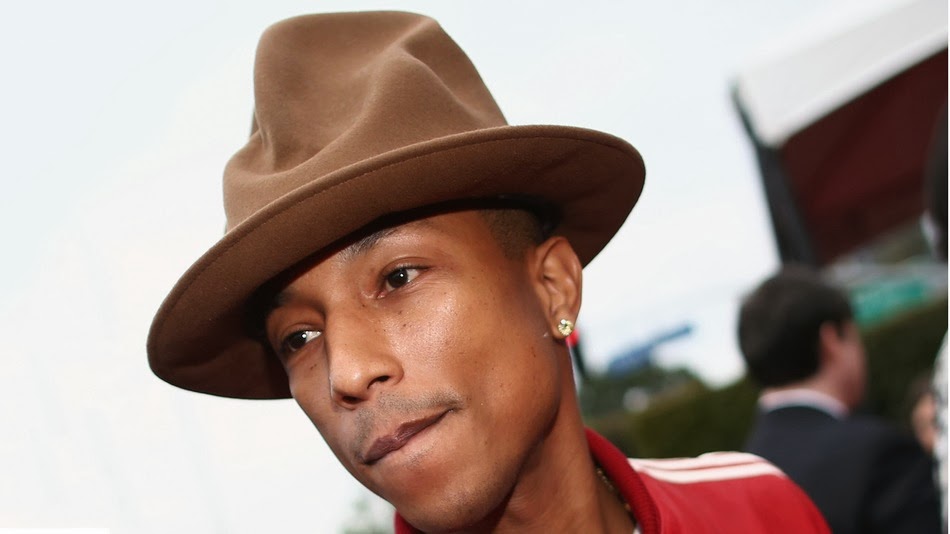 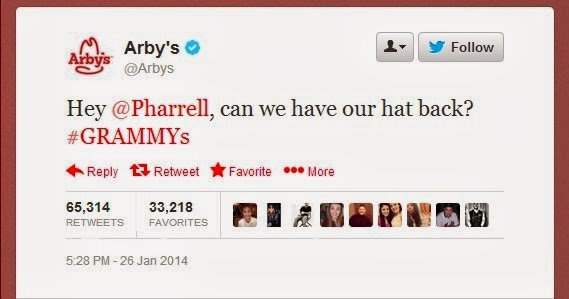 Oh, and the usual rolled up pants with no socks and shoes thing that he can’t let go of. But the hat.

HEY DUDLEY DO RIGHT CALLED, AND HE WANTS THAT HAT BACK. 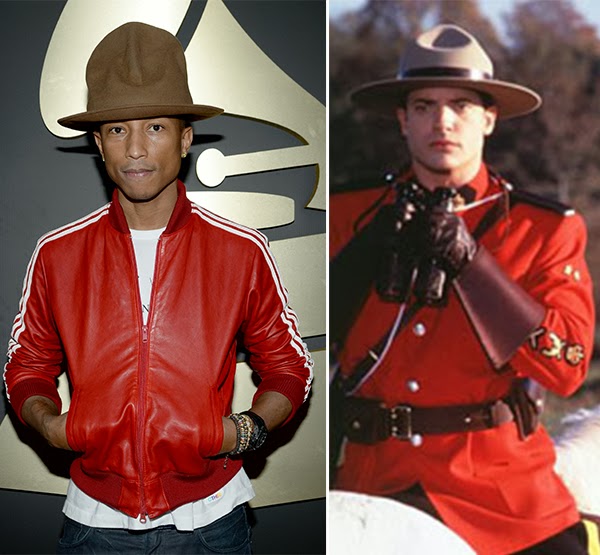 Oh SNAP, that hat has a Twitter page and already has eight thousand followers! HAHAHAHAAA!

Okay, some friends have stopped down, we’ve got some bottles of wine, a great dinner, and are ready for the show to start! The wine will help ease the crazy shit – hooray!

ON TO THE SHOW 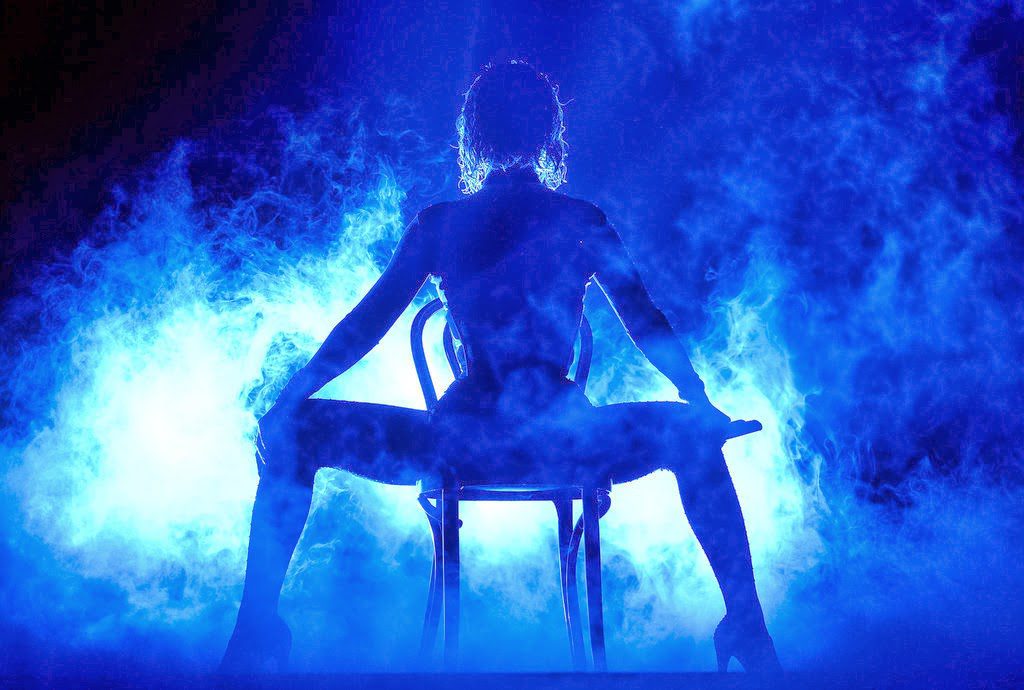 The stage is black, some fog, her hair is wet, and she’s wearing a black, sheer leotard thing with a Gaultier cage-like thing on top – very Bob Fossee – she’s working a black chiar that looks like a left over prop from Cabaret. I’m waiting for her to pull a chain and get doused by a bucket of water – WTF? The song she’s singing is “Drunk In Love.” They’re bleeping out the “bad” words, which is kind of jarring because the song is a slow grind. Uh oh, here’s comes her husband Jay Z to do the Rap part. He’s sharp as a tack in his tailored suit. Well, it’s a “Crazy In Love” type of moment, he’s got his hand on her ass. 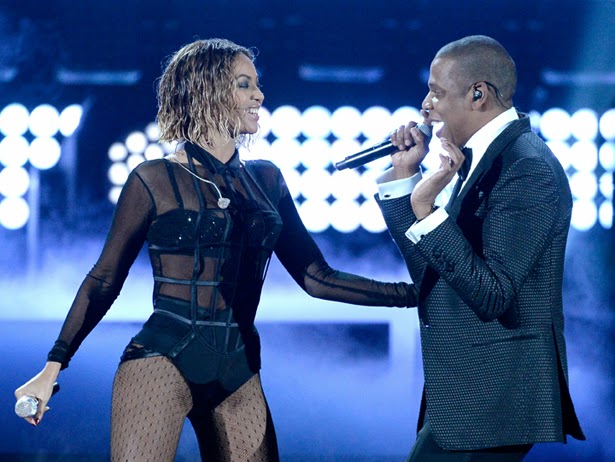 Okay, it’s over now.  WELL, THAT MADE A STATEMENT.

BEST NEW ARTIST – MAKLEMORE & RYAN LEWIS! – Remember kids, that award is usually the kiss of death, so be careful!

Here’s Lorde, singing her hit song “Royals” – She’s a little “Goth” and it looks like she dipped her fingers in black paint. I don’t think Marilyn Manson ever did that. 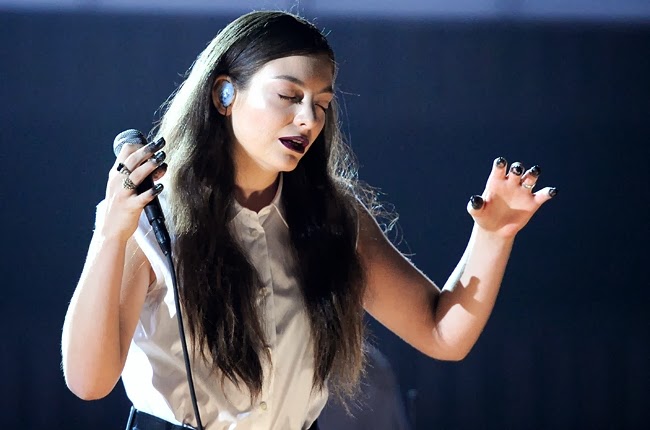 What’s going on down there in NZ? Hmmmmm…

Now there’s some young boy singing, and he sounds like crap. And I KNOW He’s crap because my friends 11 year old daughter is sitting next to me, and said so!

Here’s Katy Perry’s performance. Lots of fog, the set is all black with big, crazy looking trees, it’s Disney creepy in a way – wait – is this the preview for “Maleficent? She’s in a huge snow globe/Crystal ball. Look at those gigantic brooms – Stripper poles for Witches! Is Stevie Nicks gonna come out with the case of American Horror Story: Coven? Now there’s a black guy rapper I don’t know – is that Juicy J? Well, that was kinda boring.

Here CHICAGO AND ROBIN THICKE – singing “Does Anybody Know What Time It Is” and some other hits before they go into “Blurred Lines.”  As my friend Mary Edwards said, “Robin Thicke singing with Chicago is like remaking The Last Tango In Paris with I Can’t Believe It’s Not Butter as a prop.” – BOOM!

Keith Urban with Gary Clark Jr. – Meh. Hopefully it will make more people aware of Gary, because he’s a really great guitar player. Too bad he keeps getting in his own way with the drugs and stuff.

NEW DRINKING GAME – take a shot every time LL Cool J licks his lips. See how drunk you get! 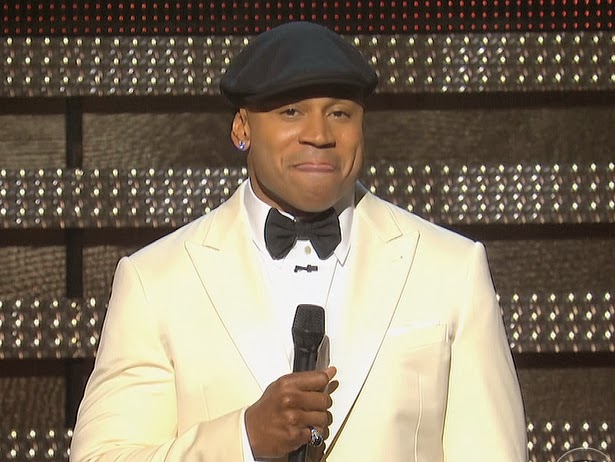 Annnnnnnnnnnd we’re back – John Legend at the piano. I don’t know this song, but it’s nice. YAWN.

Ooooh, Charlie Wilson and Kevin Hart are here to announce

Taylor Swift at the piano. Another smog about another guy she kicked to the curb…YAWN

Here’s PINK! and she’s back with the acrobatic act like last year. But she’s doing a duet with some guy who sings higher than she does! I dig that woman.

Here’s Ozzy and the dudes to introduce Ringo Starr, singing PHOTOGRAPH! Peter Frampton, Don Was, Kenny Aronoff, Chicago’s horn section – THE DIRECTOR OF THIS SHOW SUCKS – why do they keep cutting to the screen images instead of showing him and the band! COTTDAMMIT!

Oh, now the Imagine Dragons are on with Kendrick Lamar. I don’t know any of their songs, and now that the camera keeps cutting to Taylor Swift trying to do the Dougie, I DO NOT WANT TO HEAR THEIR MUSIC.

This is very boring, a tired old retread of a Dr. Dre beat. This Kendrick guy is better than Whiz or Two Chains, but not by much. He is like Kanye, before Kanye went nuts. WAIT A MINUTE, STEVEN TYLER KNOWS THE WORDS TO THIS SONG? OH EMMM GEEEE!

Lots of smoke fire big drums, Kendrick is yelling, VERY BOMBASTIC! THE PEOPLE ARE ON THEIR FEET, CHEERING! Probably the most energetic performance of the night.

And now, Casey Musgrave – what a horrible transition, from smoke, fire, big drums being beaten, and a Rapper yelling his face off, to a mid tempo Country song by a young girl who’s surrounded by a band in suits with blinking white Xmas lights on them. Oh, her cowboy boots do too. Yawn. 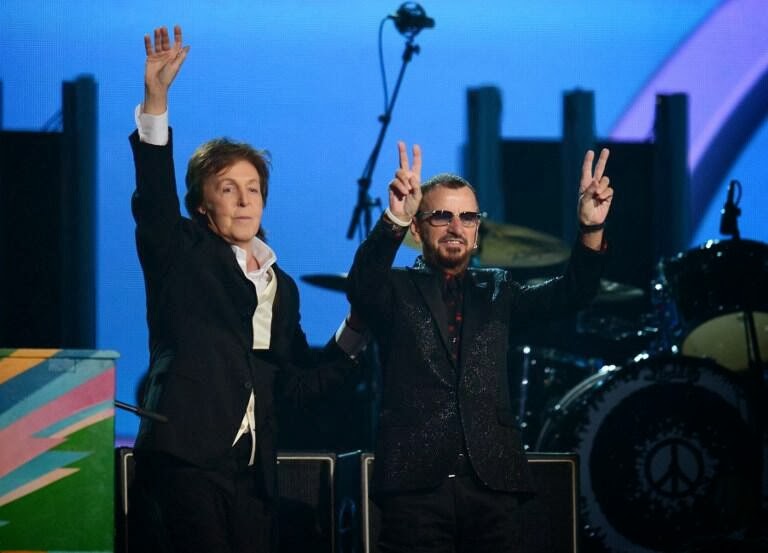 HOORAAAAAY, Paul McCartney! and Ringo Star! YAAAAAY! Oh, why is Yoko sitting so far away from George’s wife and Barbara Bach? Good grief.

PRODUCER OF THE YEAR – PHARELL WILLIAMS

BEST POP VOCAL ALBUM – BRUNO MARS – That kid is THE BUSINESS – love him!

STEVIE WONDER, NILE RODGERS, ROBOTS, THAT HAT WITH PHARRELL UNDERNEATH IT – DISCO LIVES! 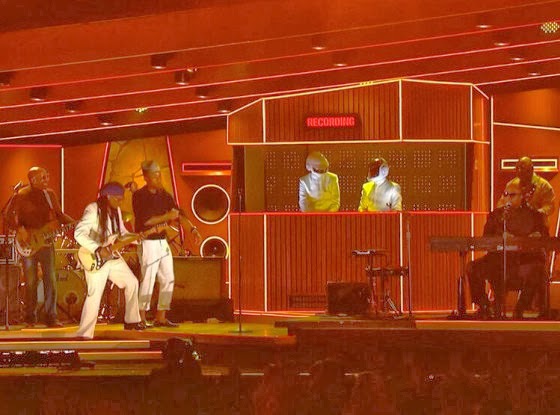 SONG OF THE YEAR – “Royals” by Lorde

Okay, here is Metallica performing “One” with a Chinese guy who’s a Classical piano player.

Interesting. Weird. Boring. They should have done this earlier in the show…or not at all YAWN. I think that 1980’s Metallica would have kicked 2014 Metallica’s ass for sure. I think that Cliff is now twirling in his grave like a top.

RECORD OF THE YEAR – GET LUCKY – By Daft Punk! YAY!

Okay, here’s Queen Latifah introducing MAKLEMORE & what’s-his-face. They’re playing their hit about being gay. So they do the song, Trombone Shorty playing, and a full band. Then Queen Latifah comes out and introduces all of these couples (gay, straight, interracial – one of the couples is made up of Macklemore’s gay sister) who are there to be MARRIED, CUT TO THE COUPLES, they’re all in the aisles of the auditorium. Then, Latifah asks them to exchange rings, people are crying and freaking out. Then SHE BEGINS TO CONDUCT A CEREMONY. THIS IS LIKE A MOONIE WEDDING CEREMONY!

As Latifah is saying that they’re officially married, MADONNA WALKS OUT to sing the chorus to “Open Your Heart” along with the chorus of the song. Her face looks a little better, but I’m certain she had a mild stroke. She can barely open her mouth, what the fuck? 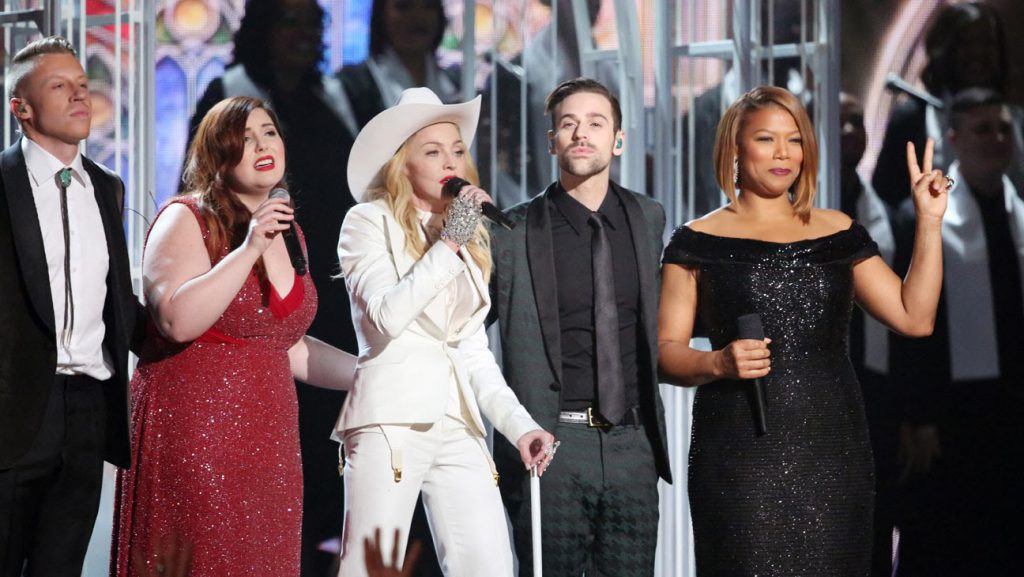 I’m kinda miffed because Latifah STILL hasn’t come out yet, and I’m wondering why. And Madonna and her face, and her mouth that spouts racial epithets. What a mess.

The Music Educator Award winner teaches a CELTIC AMERICAN STRING BAND – apparently he’s here in “rural New York” wherever THAT is. It’s funny how the President of NARAS keep spouting off about how important music education is, and yet doesn’t even let this Teacher talk. Hmph. I know ratings, ratings, and nobody wants to hear that Teacher.  ‘

On to the parade of photos of the people who died last year. EPIC FAIL – When they showed the Robert “Bobby” Smith from The Spinners, THEY SHOWED THE WRONG PHOTOGRAPH – WAY TO GO GRAMMYS. It ended with Phil Everly, then Miranda Lambert & Billy Joe Armstrong sang “When Will I Be Loved.” 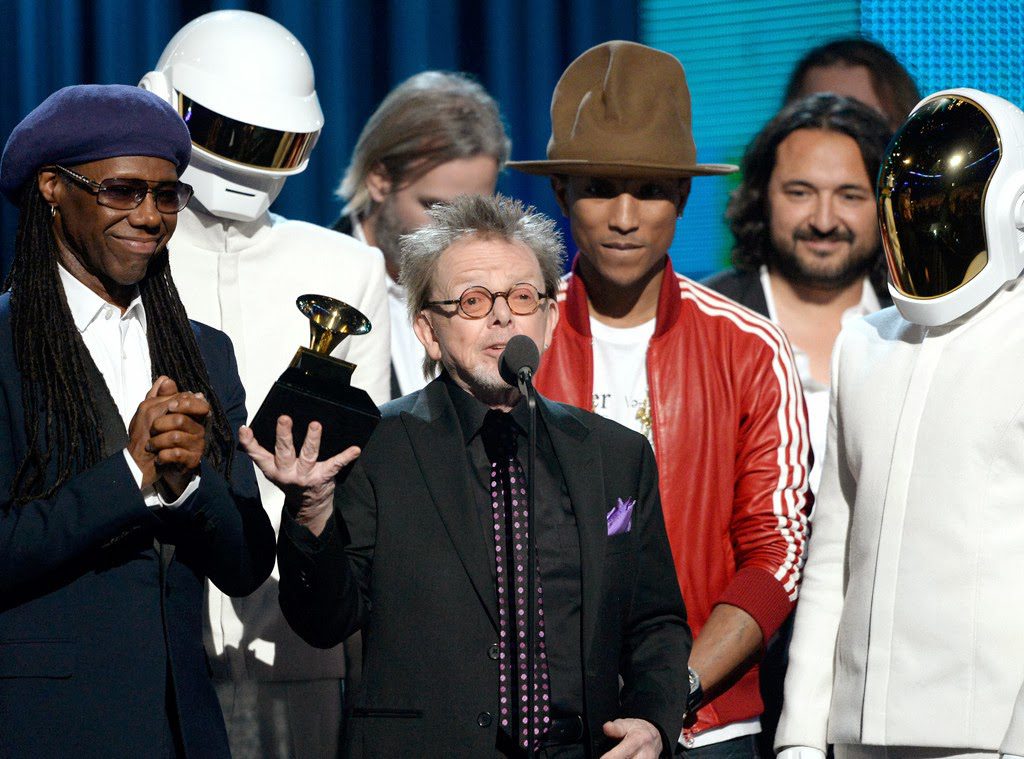 Okay, last performance of the night – NIN, Queens Of The Stone Age, Lindsey Buckingham, Dave Grohl = INSANITY Annnnnnnnnnnd, they cut it off halfway in. WAY TO GO GRAMMYS!

Okay, so they had only TEN on air awards, lots of music, and the wacky combinations. Over all I think it was quite boring, and that was to be expected. It kinda makes me miss P. Diddy. 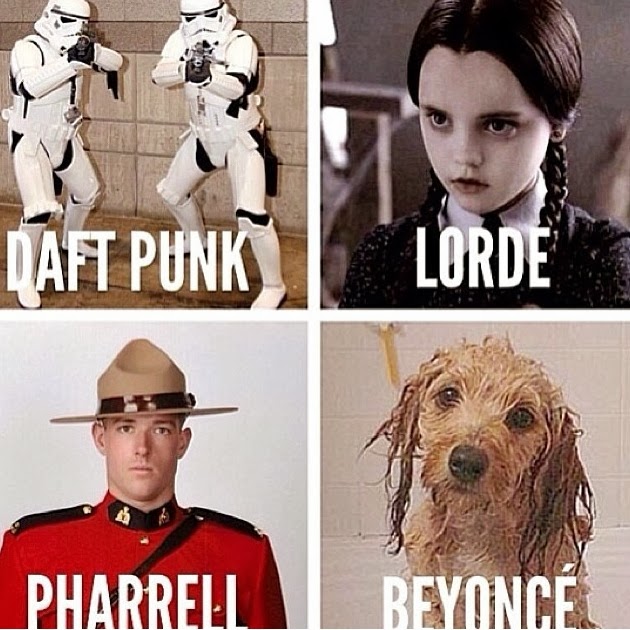 Well, that’s the end. The wine flowed, dinner was great, my friends were awesome, and I gotta go home now. Hope you had fun. SEE YOU AT THE OSCARS!

In this article:Awards/Award Show, Music, Rant