I think it can safely be said that the appeal of Monty Python has extended even to millennials: What geek of any age can’t quote Monty Python and the Holy Grail at length?

But there are so many other great British comedy series – ones that never got any big-screen adaptations – that elicit a blank when I mention them to anyone under 30.

Take Blackadder. It pains me that Rowan Atkinson might be known to younger generations just as Mr. Bean, Johnny English or the clueless clerk who took far too long wrapping up an illicit gift for Alan Rickman in Love Actually. 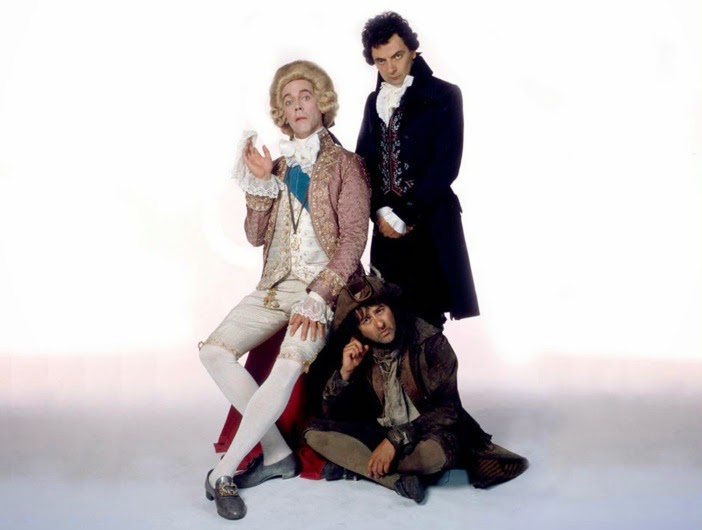 And far too many people have no idea that Hugh Laurie was a comedian before playing the world’s crankiest doctor. (The fact that he’s actually British somehow slipped out during his many awards speeches for his run on House.)

Here are just a few of the brilliant Britcoms you may have missed out on, in between Monty Python and Eddie Izzard, featuring some of the funniest people in England at their very best.

In four different series and four different time periods, Edmond Blackadder (Rowan Atkinson) contends with kings, queens, idiots and religious nuts of all stripes. The series starts off in medieval times with The Black Adder where Edmond is the sniveling second son to Richard IV (Brian Blessed, in roaring good form).   It’s not until the second series, Blackadder II, that the character becomes the clever, sharp-tongued character we know and love. In this series, he jockeys for power in the court of Queen Elizabeth I (a very silly Miranda Richardson) with his rival Lord Melchett (Stephen Fry).

My favorite is Blackadder the Third, set in the late 18th century in which he is butler to the dimwitted Prince of Wales (Hugh Laurie) who, along with grimy servant Baldrick (Tony Robinson), is often the butt of his best insults.   Blackadder Goes Forth finds him during the World War I, again with Fry, Laurie and Robinson. The final series has a much darker tone, although it still hits the usual levels of silliness.   There is also an excellent Christmas special – a hilarious reversal of A Christmas Carol — in which Blackadder starts out as the kindest man in all of England, only to find that he’s been taking advantage of and vows to become the most selfish.

Classic episode: Duel and Duality
Blackadder is challenged to a duel by the Duke of Wellington (Stephen Fry). 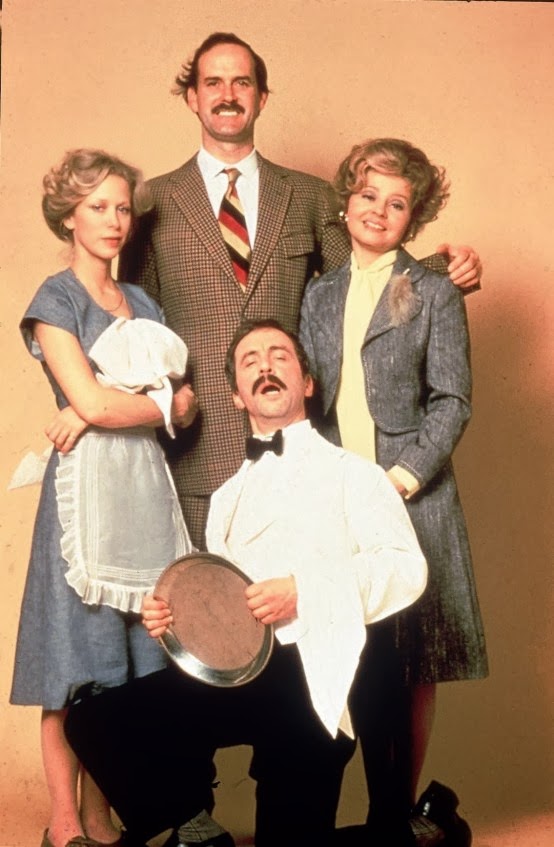 Since this stars Python alum John Cleese, that’s reason enough to watch. He’s at his most manic as hotel owner Basil Fawlty, who has his hands full between his nagging wife Sybil (Prunella Scales), the hapless waiter Manuel who speaks no English and his own spectacularly bad judgment. Trivia: Cleese was married to sensible maid Polly (Connie Booth) at the time and she’s the only one in the whole show with any sense.

Classic episode: The Germans
In which Basil is warned not to mention the war and ends up goose-stepping around his traumatized guests. 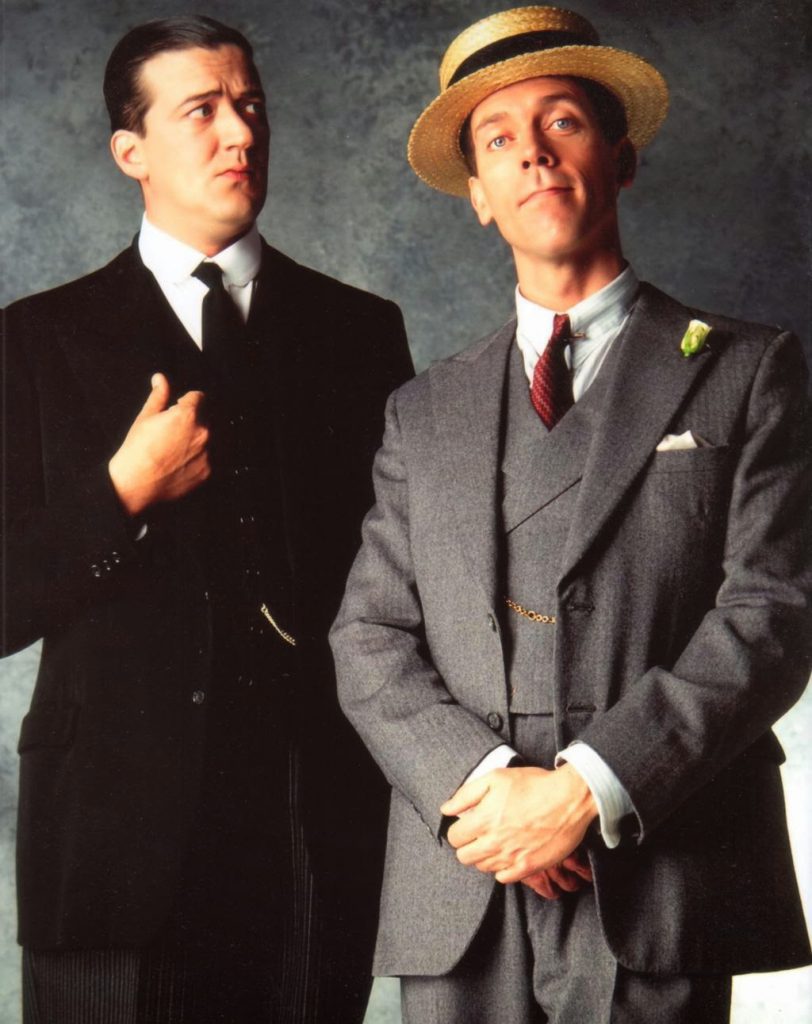 Hugh Laurie and Stephen Fry are perfectly cast as Bertie Wooster, a 1920s upperclass twit, and Jeeves, his ever-useful valet. They’re the most famous characters by P.G. Wodehouse, who wrote several stories in which Jeeves rescues Bertie from inadvertent proposals, disapproving aunts and mooching friends. Somehow, Bertie always ends up on the worst end of the affair, although he considers Jeeves worth his weight in gold.

Classic episode: Cyril and the Broadway Musical (or, Introduction on Broadway)
While in New York, Bertie is instructed by his fearsome Aunt Agatha to keep a fellow aristocrat, Cyril Bassington-Bassington, away from temptations, including the stage. Instead, Cyril lands a part in a Broadway play, the very one his aunt wants to see. 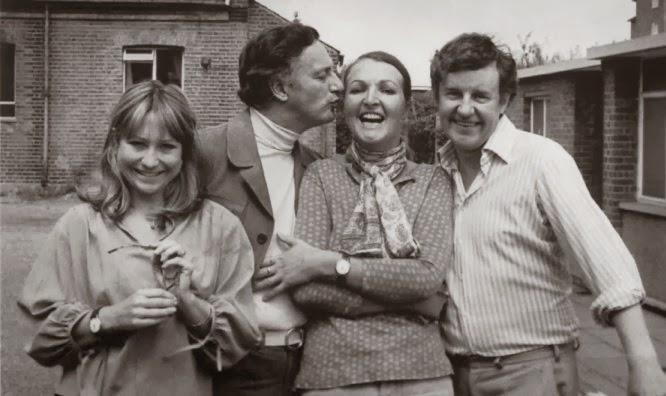 Known in the U.K. as The Good Life, it starred Richard Briers (later of Monarch of the Glen) as Tom Good, who decides to quit his rat-race job and turn his house into a farm, much to the horror of his snobby neighbors, Margo and Jerry. His wife Barbara (Felicity Kendal of  “Rosemary and Thyme”) surprisingly goes along with his more far-fetched schemes, like making his own wine and raising pigs.

Classic episode: Suit Yourself
Tom makes a hideous green suit from stinging nettles and wears it to an important dinner. 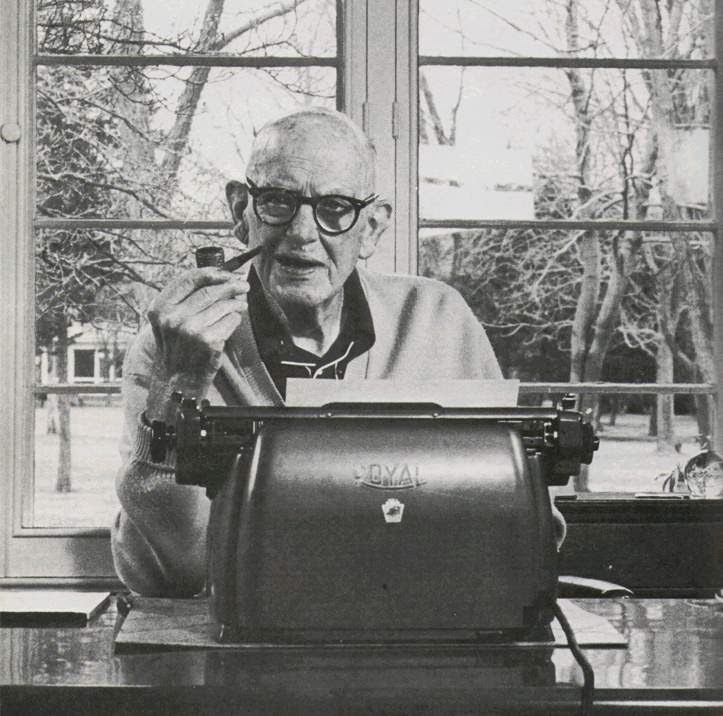 P.G. Wodehouse wrote much more than just Jeeves stories and this series offered delightful adaptations of his other short stories with a limited cast taking on new roles in each episode. Wodehouse himself provided the introduction in the first and second series, shortly before his death.

Classic episode: The Truth About George
A man with a stutter is ordered by his therapist to sing instead of talk, resulting in everyone thinking he’s a mad killer on the loose. 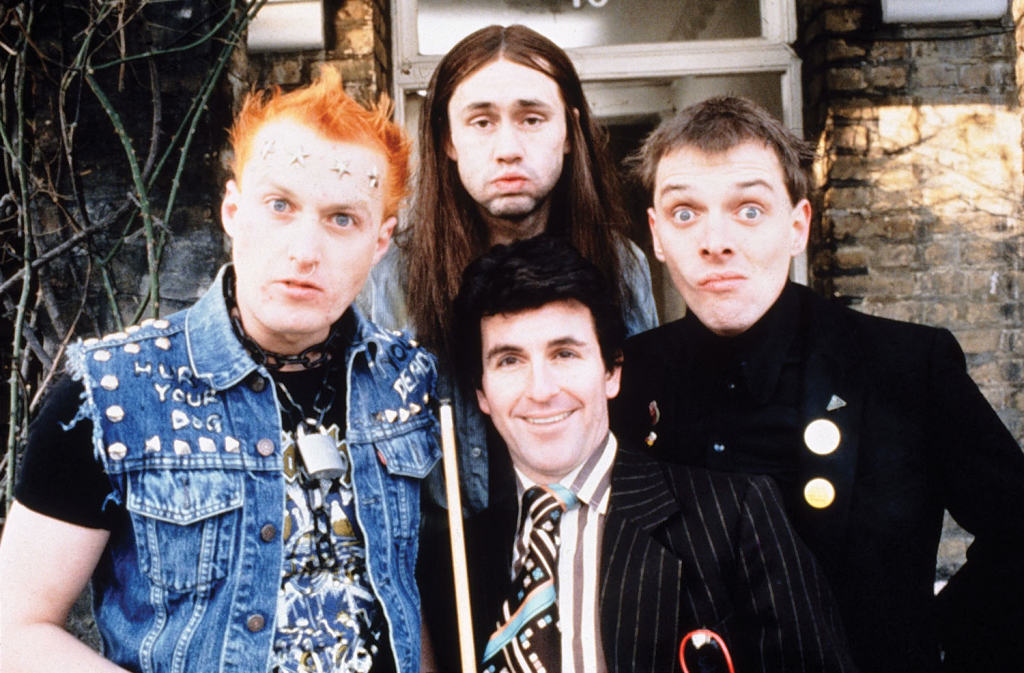 This surreal, slapsticky sitcom featured punk Vyyyan, button-wearing anarchist Rick, depressed hippie Neil and “Cool Guy” Mike living not so harmoniously in a squalid North London house. Alexei Sayle co-starred as their unpredictable landlord. It aired on the U.S. on MTV beginning in 1985, a good fit since nearly every episode featured performances from bands including Madness and Dexys Midnight Runners.

Classic episode: Flood
While trapped thanks to a flood, Vyvyan ends up in Narnia during a game of hide-and-seek, the guys attempt to cook Neil, then realize they’re trapped with an axe-wielding maniac.