A dinosaur detective living in the present day fighting raptors in a time-spanning adventure?  Sign me up!

Writer Richard Fairgray was kind enough to take this colorful noir dino for a workout on the Cosmic Treadmill and tell us about his favorite toys and turtles!

FOG!: Thanks for joining us, Richard! What’s the elevator pitch for Blastosaurus?

Richard Fairgray: In short, he’s a crime fighting dinosaur, it’s just that in the real world that isn’t super helpful. He fights raptors, robots, travels through time but at the heart of it all he’s a curmudgeonly old man who wishes he wasn’t dinosaur shaped. 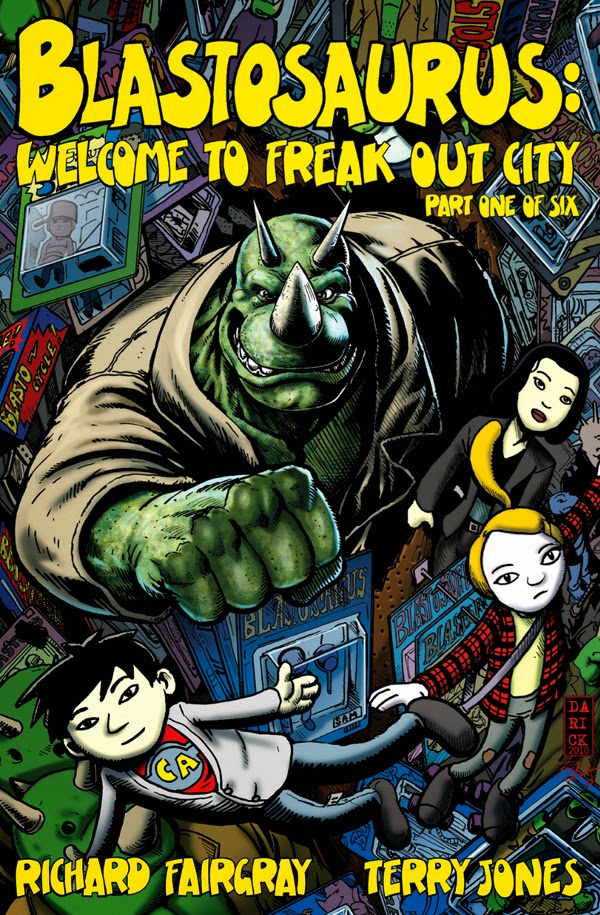 I love how you’ve tapped into the aspect of childhood play and storytelling with the book. Does that imagination stay with all people or just creative types as they get older?

I think it’s just a different way of looking at the world. All kids have that default of asking ‘why’ to anything and everything they discover and I think as we get older we stop needing to know, we become happy to just accept ‘because’ as an answer.

I was also very aware that in the early issues of Blastosaurus there’d be a lot of exposition to set up the story and, more importantly, the rules of this universe.

There’s a point in issue #2 where we had to establish that it’s impossible for someone to travel in time within their own lifetime, that they couldn’t exist twice at the same time or one of them would break down. We played around with this explanation for ages, giving the line to different characters but it was SO BORING. No-one wants to read a dense explanation of imaginary physics. So, we had one of the kids say it, getting across everything that was necessary with one sentence of kid logic, and suddenly it worked.

I also like writing from the point of view of someone who doesn’t fully understand what’s happening, there’s a freedom to optimism that is missing from my life and the lives of most adults.

Tell us about your creative relationship with fellow New Zealander Terry Jones. You’ve been working on projects together for a while, correct?

Terry and I have been together for years, by this point we’ve lost track of who has which thought. I think what makes the relationship work so well is that we have a very similar approach to writing but we bring our understandings of culture from totally different places, mainly because of the 37 year age gap between us.

Are all of the cool character designs yours?

Yes, but only the cool ones. The dumb ones are by someone dumb.

In seriousness, the four kids are based on some friends of mine (and myself obviously). The design of Blastosaurus is more complicated, see my diary comic for more details.

Blastosaurus isn’t your typical hero, why do you think he is ready to travel in time for the sake of some humans he just met?

I know the exact reason for this but you’ll have to wait for that.

On a more prosaic level though, he’s a fish out of water in a miserable future, he has no past to go back to (because being a humanoid dinosaur in the prehistoric would be exceedingly dull) and the Freak Out City he’s turned up in isn’t exactly a nice place to call home. He gets given a chance to do something good and there’s really no reason for him not to, so he goes back ten years.

There’s equal parts TMNT, Back to the Future and Doctor Who in the first two issues. What New Zealand pop culture are you making allusions to in Blastosaurus? 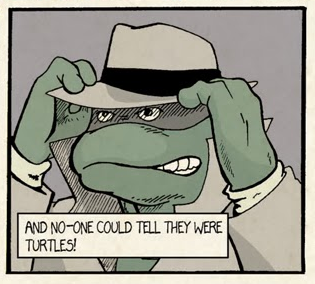 Blastosaurus lives in a fictional America which reflects where (pretty much) all my cultural influences have come from.

I grew up watching American TV, reading books from all over the World and (later) reading comics that were usually at least set in America. It’s not that I have anything against New Zealand culture, it just isn’t something that’s played a big role in my life.

How has the response been on ComiXology? Do you prefer the platform to your webcomic format?

People seem to be liking the book, I’ve had some very positive emails and reviews and Facebook messages but I really have no idea what that translates to in terms of numbers.

I think the ComiXology Guided View is a wonderful way to read comics, especially a comic like Blastosaurus that so strictly sticks to formal panel layouts. Blastosaurus is designed for print, it’s a book and has layouts appropriate for a standard comic book size, having it as a webcomic on my own site has never been a format I’m particularly happy with, the Guided View really makes it feel like I intended it to.

What’s next up for Blastosaurus? After Welcome to Freak Out City is there more to come?

There’s a lot more to come. This is an origin story, we’re creating a comic that has a huge ongoing arc but that also has the freedom to tell many smaller stories across a range of genres. I’m just working on issue 27 at the moment and there are already (in print and on Blastosaurus.com) three ongoing spinoffs (No Added Color, Anoraks and Acolytes, and Blastosaurus: Every Man).

What was your favorite childhood action figure fight?

I used to run a small gambling ring during lunchtime at my school. I rigged up a pulley system so you could hang action figures by their hands and then have them slide down wires at each other, like a joust but without lances. I made a killing from the rigidity of the fingers on my Mighty Morphin’ Power Rangers. They just never let go of the rope and I made 25¢ on every fight.

The only other action figures I played with a lot were the Ninja Turtles (when I was much younger) but I’d always put them in a spaceship (wheelbarrow) and move them to the other side of the room so Splinter and I could read books together while they did whatever they liked to do.