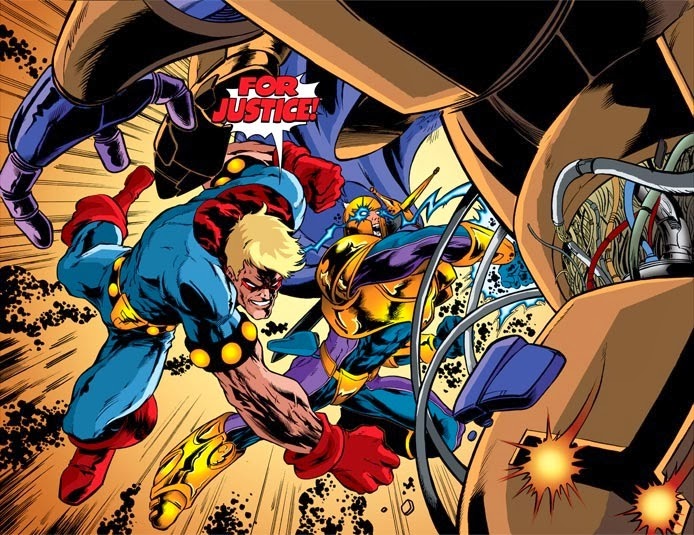 Fist of Justice was the super-heroic defender of Charm City until he made a fatal mistake that ended his career. He threw in the towel and was locked away and soon forgotten. But his power — though dormant — did not leave him. Now it has returned and resurrected FOJ — restoring him as defender of a city dealing with the new villains of the 21st century. Villains who are tougher, stronger, and meaner than ever.

Created by Mike Imboden and Ed Dukeshire, Fist of Justice spun out of his several appearances in Digital Webbing Presents into his own title.  Five issues were released of this fantastic series were released through 2009 and then, well, the series disappeared.

Gone but never forgotten, especially by comic fans who dug the fantastic writing from Mike and Ed and top notch art from such collaborators as artists Chad Hardin, Yildiray Cinar, Anthony Castrillo, Dario Carrasco Jr., André Coelho and Pow Rodrix and colorists Matt Webb, Mickey Clausen, Deon Nuckols, and Ryan Scott, Fist of Justice could have become one of those unfinished, uncollected titles that fans have a hard time convincing others to check out, simply because it wasn’t available. 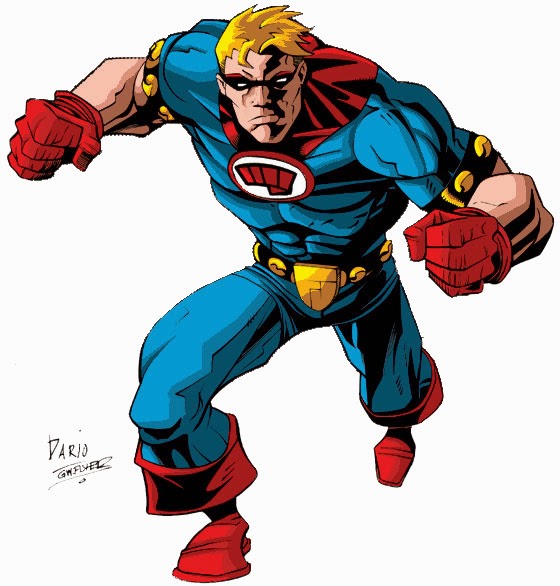 But now, finally and fortunately, Fist of Justice returns with a Kickstarter that launches both the first collection of issues and the long awaited sixth issue. Co-creator and writer Mike Imboden took some time to discuss both the Kickstarter and the series.

What was the genesis of Fist of Justice?

A long time ago, I’m thinking somewhere around 1997-ish, Ed Dukeshire and I were putting together a short story for an APA we were both in. I thought it would be fun to do a superhero story that sort of paid homage to the type of stories we both read growing up, but it needed to have a twist. In fact, that might have even been the criteria for that particular story. Anyway, Ed drew a few pages and for one reason or another, we never finished it.

Fast-forward a few years and Ed, who had started the website digitalwebbing.com, decided he was going to publish an anthology featuring the work of people in the DW forums.  Shortly thereafter, he asked if I remembered the story we never finished and what would I think about it being included in Digital Webbing Presents (the anthology comic).

I said “That would be pretty cool!” and I thought that would be it. We weren’t prepared for the amount of positive feedback we got on what we thought would just be a one-off, throwaway story. 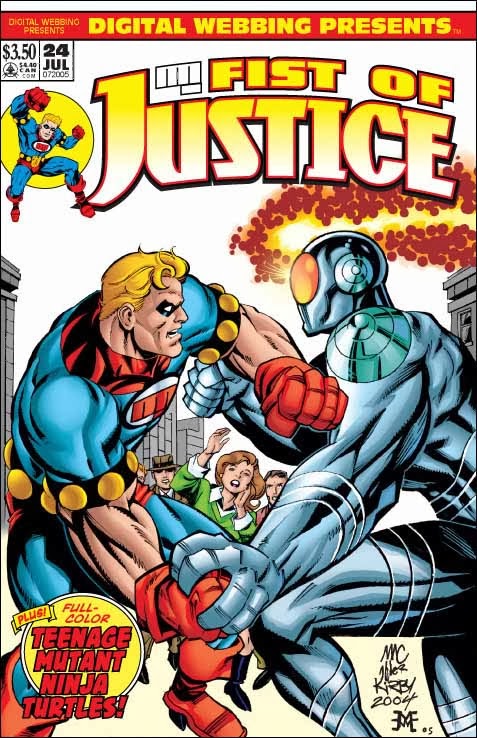 Fist of Justice feels like a love letter to old school superhero comics without ever being a direct homage or parody. What were the inspirations behind the book and for yourself, personally?

Without a doubt, it’s Marvel superhero titles from the mid/late 70s and early 80s which is when Ed and I both started reading comics. That was MY “golden age” of comics and like your first kiss, you never forget it.

When we realized we had a hit on our hands, we both decided that keeping the tone of the original short was important as that is what struck a chord with so many of the people telling us they wanted more.

The important thing – and it’s a fine line to walk – is making it feel genuine and not a parody or spoof. I’ve seen other books that do that and while they’re entertaining, they are obviously what they are; a
parody. I don’t want to take that approach – I want to write something that feels like it could have been on the racks in 1979. I may not hit every mark with every shot, but I’d like to think I’ve got a pretty
high percentage of getting it right. The thing is, not everyone gets it, and that might be my fault for not nailing every little nuance. And to them, it MIGHT come across as parody. However, a lot of people DO get it.

I work in a comic story part-time and a kid of about 12 picked up some issues from me on a Free Comic Book Day. A week or two later he came back in and told me how much he loved the comic. While that made me feel good, when he told me that they were just like his dad’s old comics, that made me feel great.

You’ve launched a Kickstarter campaign to both collect the first FOJ stories as well as jump start a new issue. Why did FOJ end originally and what prompted this long overdue return?

I figured that question was coming and honestly, I don’t really have a good answer. I guess it was a perfect storm of things, if you will.

Ed, who letters comics professionally, was getting more and more work and started lettering some books for Marvel. The price of a standard comic was climbing and that meant people had less money to spend and retailers were ordering more “sure things” and less independent stuff, so our exposure dwindled. Ads in Previews were out of the budget, so word of mouth and me doing conventions was about the only “advertising” we had.

Eventually, Ed stopped publishing altogether and I started working on other projects. Leaving the story unfinished gnawed away at me, though – I didn’t want to leave our loyal fans hanging, so I pestered Ed off and on for a while. Eventually, I convinced him that the time was right. That or he got tired of me asking when we were going to get the band back together. Honestly, we both just agreed that with the market leveling off between print and digital sales, that things felt calmer.

And with the boom in social media since we last put out an issue coupled with the means to generate the needed money (Kickstarter), it was now or never.

Assuming Volume One gets funded, is there a second TP volume planned? Are you bringing it back as a regular series or does #6 tie the story up?

Most definitely. We toyed with the idea of doing everything in one volume, but that would have been more expensive than we felt comfortable with. And Fist of Justice #1 ends on a note that feels like an actual ending, so we agreed that that was a good place to break it up. Issue #6 would end the second volume and then, to answer that last part, issues 7-10 would serve as act three. In fact, issue 7 is practically done, eight is halfway penciled and inked, and nine is scripted. That leaves issue ten to be done from the ground up.

After THAT, who knows? I’ve got another story loosely plotted out, so if we can make this work, we’ve got plenty of material to keep us going.

One of the other fantastic elements of the series is the art, which although was produced by several different cartoonists, works incredibly well as a cohesive whole. Can you tell me a bit about your other collaborators?

It’s interesting that you say that because we both felt that maybe the revolving door of artists was a strike against us. It’s nice to know that maybe we’re wrong about that! I mean, we always wanted people that had that “classic” feel to their work, like John Byrne, John Romita and what not, even though they weren’t trying to mimic their style. 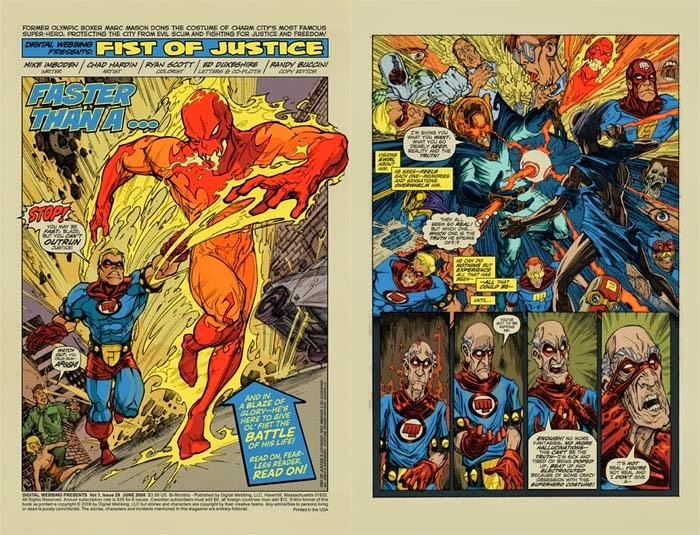 Out of the artists we’ve had, Dario Carrasco and Pow Rodrix (who you’ll see in issue #6) probably draw in the least “old school” style, but their perspective, the shots the choose and their pacing is perfect, and that’s just as important to us. The most interesting thing about the guys we’ve worked with is the fact that, because of geography, I’ve never met some of them and others I’ve only spent short amounts of time with at cons. Anthony Castrillo is a nice guy although I got to speak to him for a few minutes in New York about six years ago. Eduardo Savid seems to be a very humble person and incredibly nice. Yildiray Cinar is also one of the nicest guys you’ll meet. I’m still looking forward to meeting Chad Hardin one day. I mean, he got his start in comics with the FoJ story in Digital Webbing Presents #29-30.

What are some of the unique rewards of the Kickstarter?

If we’re taking unique as in rare, I’d say the Matt Haley commission tier would be THE most unique.

Matt doesn’t do commissions anymore, but he likes Fist of Justice so much that he’s helping us out by
offering one up. We’ve also got a couple of tiers featuring J.K. Woodward doing commissions and at prices that are probably lower than he’d charge at a convention.

If we’re taking unique being different or special, I’d say the fact that we’re offering co-starring roles in an exclusive 8 page FoJ story that will be included in the Kickstarter-only version of #6 is pretty neat. Ed’s also offering his services to letter and pre-press a book for any creator that is looking for that. We’ve also got limited edition prints, original artwork, t-shirts and nifty postcards and stickers, just to name a few things. 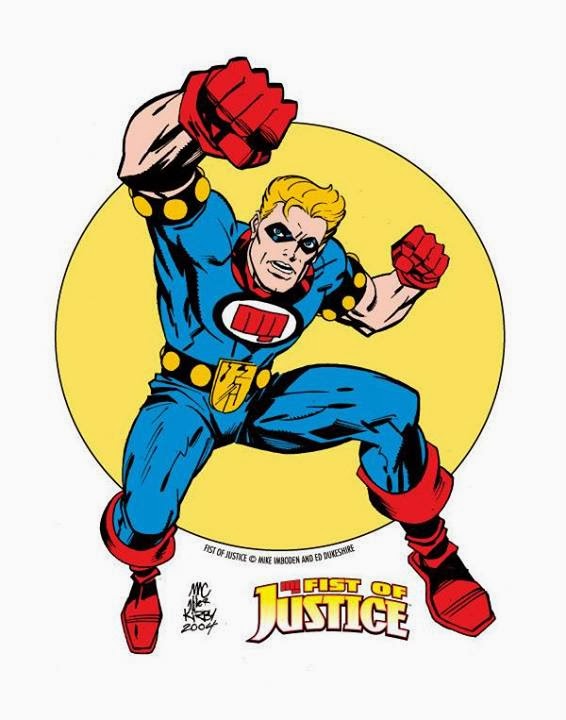 Between you and me, though? Those Haley and Woodward tiers? Awesome stuff right there.

Finally, what would you say to a new reader to convince them to check out Fist Of Justice?

“If you ever want to see your dog alive again, you’ll buy this.”

That’s probably not the best tactic to use, though, huh? I’d tell them that by NOT trying it they would be missing out on some great, old-school style comics. That they’re going to get a lot of bang for
their buck because we cram a lot of story into each issue and we usually try to include some extra stuff like behind the scenes features or pin-ups. That if they’re tired of comics that are based too much on current political and social issues and would prefer their superheroes to just do what’s right because it’s the right thing to do and not because of some agenda, that they’d find that right here.

Thanks for taking the time to talk with us, Mike.

The pleasure is all mine, man. Now everyone go check out the Fist of Justice Kickstarter!

Check out (and Support) the Fist of Justice Kickstarter HERE!