Nine young interviewers march in a little conference room in the Ritz Carlton Hotel. Aaron Paul stands and greets us all with a tired but jovial smile. His hair is shaved close and he looks cool in his black leather jacket, dark t-shirt and black jeans. While all of the interviewers settle in their seats, he smiles and shakes my hand as I sit down next to him. He asks my name and who I write for. We all introduce ourselves and the clockwise series of questions begins.

And as the lucky lady sitting directly to his right, I had a very good view of the actor, and let me just say, his eyes are an incredibly bright shade of blue. 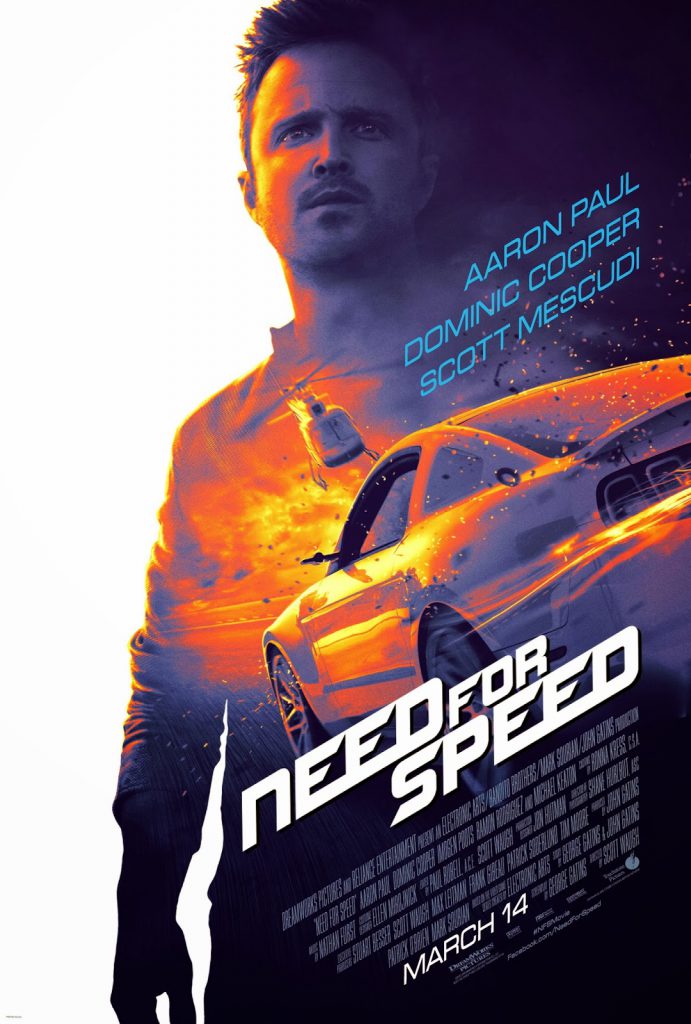 Fellow Interviewer: A lot of directors try to, when they’re casting, follow the mantra that the actors they’re casting have to have some part of the character inherently in them. Do you think you have any Tobey in you?

Aaron Paul: Um…maybe yeah I mean I think the driving element I love, and so I guess I’ve always enjoyed cars and appreciated cars and I have an old classic car myself. I don’t know I like them much more now though. So, I think I might have that in common

I was wondering how you were able to transition from Jesse Pinkman to Tobey?

Well with Jesse it was hard to say goodbye to him just because I cared so much about him and I know it sounds crazy because he’s not a real person but I really did I really felt liked I lived and breathed every single moment of his. But he was such a tortured individual so it was nice to kind of leave that behind because Jesse is quite different than Tobey.

Jesse’s kind of insecure, tortured, beat up you know just easily manipulated kid. And Tobey is much stronger; confident driven. I literally started this film the day after I wrapped Breaking Bad. I left that night and I started the next –

You were driving away in that last scene… (Laughter)

(Laughs) I was driving away in that last scene and I just drove straight into this film. (Laughter) It was good I went from driving away and the next morning I was trying to tune up a million dollar Tonisec. I was like what is happening right now?

I was gonna ask what your favorite movie about cars is?

Aw man. I’d have to say Bullitt maybe. I don’t know I just think Steven McQueen is such a badass and I just love that he was a racer before he was an actor. That was Scott’s whole pitch: that he wanted to do a throw back to the films that really started this genre such as Bullitt, Vanishing Point, Smokey and the Bandit. That’s what excited me—that  we were gonna actually do all these stunts and not use CG, kind of like films back then ‘cause they had no choice because there was no CG. What’s your favorite car movie? Besides this one.

If you were to alter any scene in the movie what would it be?

I don’t know. I’m not sure. I was trying to get them to allow me to be the one going off the cliff in the helicopter scene. They would not let that happen.

Last night you said that you were, at times, a little terrified to even get in the cars. So was there anything about this role, about this movie, that made you a little nervous to get involved with it?

What I meant by a little terrified just getting in the cars was because I didn’t wanna scratch them. That’s what I mean – these cars are just – First of all, no one should spend that kind of money on a car – I didn’t want to destroy it but I had so much fun flying them around. Safety was their whole main priority so we always felt extremely safe even going at the highest – like the highest speeds I got the cars up to were maybe 125 maybe 130. But that’s on closed down freeways and I’m just weaving through traffic but the people in the traffic were all stuntmen and women. Maybe that was the most nervous I got, but not really as well, I was just excited.

Oh wow. To act in… Oh no. I think probably the most nervous I got stunt-wise was after Pete goes off the bridge and I have to flip the car around and drive down the bridge and then fly right at the camera and slide the car and stop inches from the camera. I mean there’s a human being holding that camera and that was our director. And he just kept saying… “you gotta get closer than that. If you hit me I’ll just role over the car.” ‘cause he’s a stuntman so he does that so he’s like, “I’ve been hit by many cars.” That didn’t make me feel better (laughs) but I did it. So that was the most terrifying scene, and it wasn’t even terrifying, it was actually really fun I just didn’t wanna hurt him. But to act in, man I don’t know. Did any scenes pop out at you that looked kinda bad ?

(Laughs) I’m kidding. I don’t know. Maybe running up to the burning car, you know, putting yourself into that emotional state is tough. When you have to do it over and over and over again from a million different angles.

What thought are going through your head when you’re sitting behind the wheel and you know the camera’s on you and like what to you think to do with your expressions? How do you think about it?

You know what I think is great—is you know we’ve all seen movies where people are driving and that they’ll look over and they just continue to have a conversation with their passenger and they just move. They’re not looking at the road. But here we’re on the road, so rarely did we use a tracker, or something pulling the car.

What kind of roles to you generally look for?

FOG!: So, I know Michael Keaton’s in here and you just finished up with Christian Bale in Exodus…

FOG!: Is this an elaborate scheme—

(Interrupts, laughing) YES IT IS! I am trying. Yes.

FOG!: –an elaborate scheme to act with all the Batmen?

(Laughing) Yes! Yes it is! I love that you pointed that out! Yeah I just I love Batman and I wanna surround myself with everyone that’s played Batman (Big laugh).

FOG!: What’s something that would surprise people to know about you?

I’m terrified…no I can’t say that.

Almost all interviewers in unison: Now you have to tell us!

No, um…I was born on my bathroom floor. My mom delivered me by herself. Cut the umbilical cord herself. Yeah she was a little terrified on that day as well.

You’ve become kind of like an awesome poster-child for independent film because you’re a guy who’s done really well in big budget things like this but then you always return to independent films. So how do we keep the independent movement going and create really unique stuff?

I was interested to see what you thought of the premise of making a movie based on a video game?

Honestly I was very hesitant. I mean I was a fan of the game, Need for Speed, but when I saw the script I was like, “Eh…I don’t know what this is gonna be like”. But then I read it and I thought it was so fun.

But with this game, there’s no narrative. So we’re really just working with a blank canvas here. We could put any story we wanted, really, just as long as we were using fast cars and every now and then putting the audience in the drivers seat. They came up with a really fun great story and that’s what drew me to it. And the fact that they weren’t gonna do any CGI and do everything practical and just make it more real, and that excited me.

Are they any actors or directors that you would like to work with in the future?

There you go. Christopher Nolan. Same. Yes please. Scorsese. Paul Thomas Anderson. Quentin Tarantino. Yeah there are so many…

And with that, the roundtable ended and all of us thank Aaron, who encourages selfies.