An alien prison planet Maia lives on the other side of our sun, occupied by killer pumpkins! We don’t see how a pumpkin planet can be more sincere than this one! Space Marines are sent to investigate AWOL prisoners and pesky pumpkins in Combat Jacks!

FOG!: Thanks for joining us, Mark. Combat Jacks originated as a dinner table conversation. Why Jack-O-Lanterns?

Mark McKenna: It was around Halloween and something clicked in my mind that Jack O’ Lanterns are meant to be scary, yet there weren’t really any amazing Jack monsters in movies or books that I could think of, with a few exceptions, so along with my son, it became dinner table banter and went on from there. 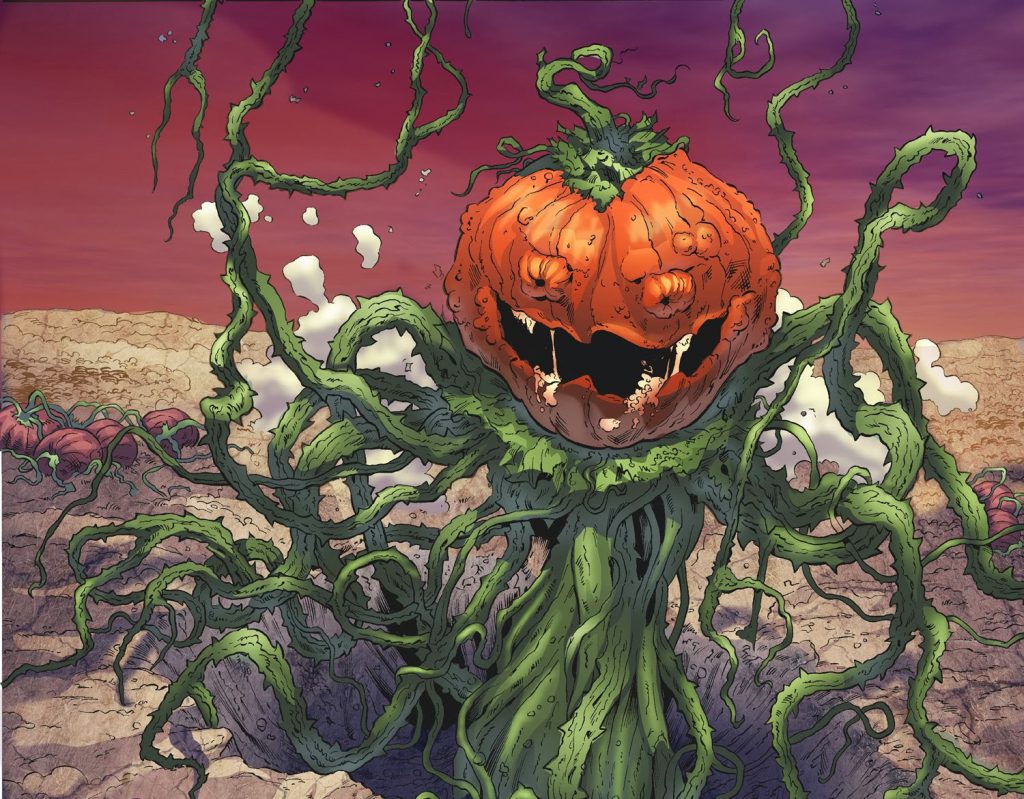 Most people know you as an inker for the big two and Inkwell Awards Hall of Famer. Is Combat Jacks your first foray into writing?

I have also created and written my kids books, Banana Tail and Friends.  But other then those books, this is my first writing for this genre.

Jason Baroody‘s pencils are great too, how did you hook up with him and the rest if your art team including our friend John Hunt?

Jason came to me by way of our, at the time, mutual art rep, Bob Shaw. I had met Jason at a few shows, but really didn’t know his work. When we got to talking and he was gung ho to take a shot at it, I believe I flattered him by offering it to him and he told me, in fact, that if he didn’t need to make a living, he’d have worked for free on it just to have the chance to work with me.. so, in essence, flattery gets you everywhere.

I cant recall where I met John Hunt, but I do know he was hungry and multi-talented and you can never have enough guys that have a wealth of digital and artistic knowledge.

How was your Kickstarter experience for the first issue? Is funding a second issue more or less challenging?

The original Kickstarter for Jacks was actually done through Indiegogo and I asked for a lot less money then I actually needed to produce the book. I budgeted for a 24 page book, but the book felt rushed, story wise, so I went back and developed it more as the Combat Jacks: Director’s Cut, which added 5 new pages of story.

Of course, as you do more and more fundraisers you learn more and more how to post, when to post and what to post, so knowledge is power. I also think that if fans responded favorably to the 1st issue and I haven’t burned any bridges, the second time around will benefit from the first experience.

Cynthia Rothrock is starring in the second issue as a space marine! How does casting real people as Kickstarter rewards affect your writing process. Hey wait… This Mordecai dude looks familiar!

Well, I thought I’d offer real life roles as space marines in the book to see if they’d garner attention and I blew them out in 2 days. Then, of course you second guess yourself, as to why I didn’t offer more marines to make more money, hahah.. So coupled with that was the idea to bring Cynthia’s fan base to the project. 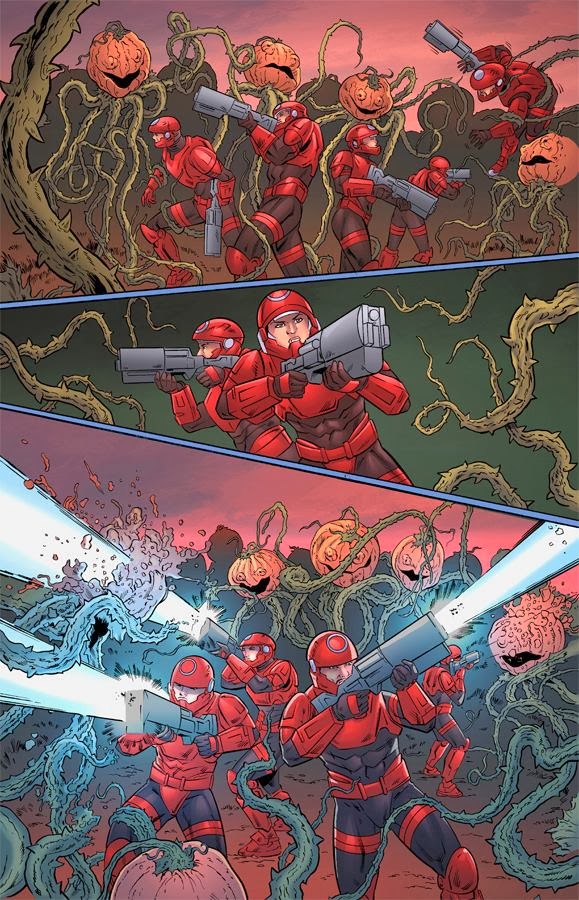 Cynthia and I are friends. We had talked about her doing own comic book a few of years ago when a few of my artist friends had met with her and came up with an idea to do a book featuring her, but funding wasn’t easy to come by. This was all pre-Kickstarter, which now creates a viable way to support and fund projects and with her fan base, seems like it will be a no brainer

And yes… Jason (Baroody) modeled Mordecai on me.. which if you read the description he’s a tall, excessively thin, tooth-challenged creep with comb-over hair. 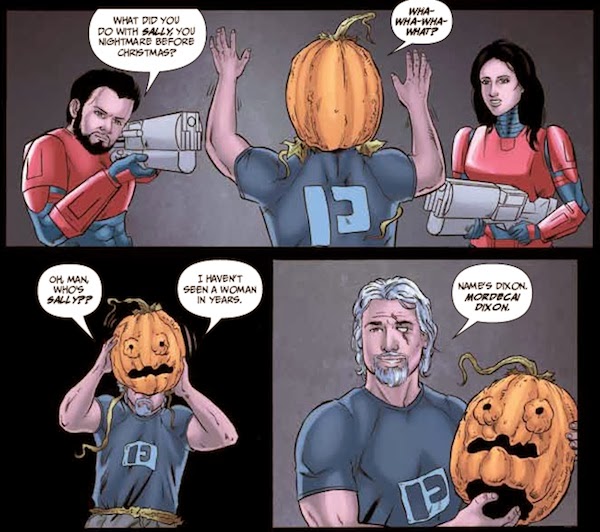 You’ve hinted that IDW is interested in the trade for Combat Jacks. How awesome is that? How did that come about?

Very excited if they stay true to their word. Before I opted to do the book myself, under my own Banana Tale Press imprint.

Dark Horse looked at it but passed and I know Chris Ryall at IDW knows who I am and is a fan, so he said to me, “I won’t do single issues, but if you do Combat Jacks as a 4 parter, I’ll collect it for you.  Jacks was never meant to be anything more then a one shot.

So I started to get excited by the prospect of doing a 120 page epic.

The rewards are amazing this time around. Kelley Jones cover, t-shirts, original art. Are having well know guests to donate work key to getting funded?

This was a paying gig for Kelley, but I know for a fact, because we’ve had a working relationship and I consider him a friend, he cut me a huge break as did Tom Raney on the 1st issue cover. 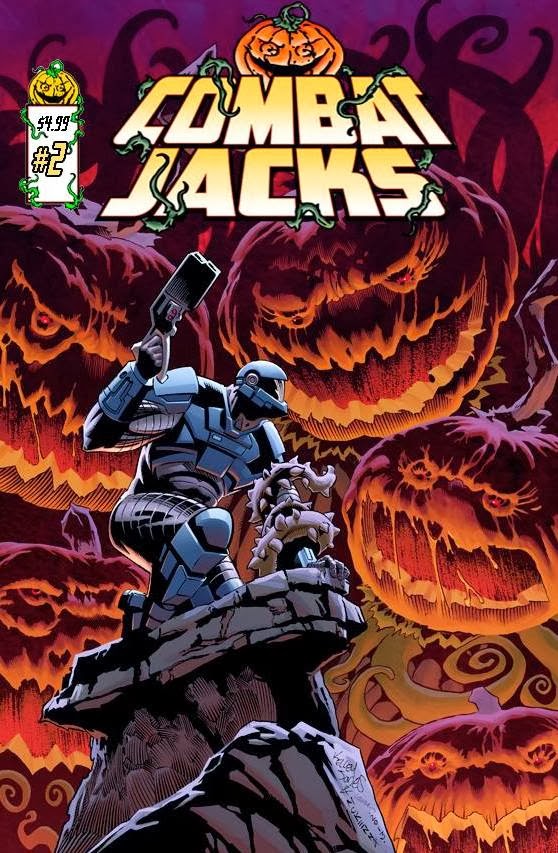 Mike McKone who colored the retail issue of #1 would never accept money from me, so I paid him in Dunkin Donuts strawberry-frosted donuts. I love having friends in high places that I can call upon to help and support me, but to be honest, as a freelancer, our time and money are very important to us, and I know this first hand, so when I ask for help, Im completely savvy about what I’m asking of these guys. Some also took up to 8 months to finish work they’ve agreed to do, so its hard for me to go back to the well a second time?

Finally, is pumpkin your favorite pie or are you sick of the stuff by now?

I’m a dutch apple pie fan. Pumpkin is maybe #4 on my pie list, that’s why I have no issue killing them all. If they were apples, I may tuck them into bed with a bed time story, and read them Combat Jacks!

Thanks, Mark! See you on the Pumpkin Prison Planet!