Mark joins us to talk about his collaboration with Larry on this exciting film, his background, education and his favorite Joe!


FOG!: Welcome, Mark how are you doing today?

Mark Cheng: Great, it happens to be my Birthday!

Tell us a little about your filmmaking history.

Like every kid, I loved watching movies when I was young. I really got into comic books as a visual storytelling medium, I was one of those guys who went to college to study film at Cornell University as a Political Science major. I dropped out of that, and pursued film production.

I spent about 8 months after college working on music videos, commercials, a memorable Chef Boyardee commercial, spinning a ravioli can on the table and filming it from 1000 different angles. I was a lowly Production Assistant, driving a prop truck from location to location.

I worked on a Blues Traveler video in the summer. Then I called it quits.

I looked at the crew, three levels above me, and the tiers didn’t make sense to me, so I taught myself web design and that led to corporate America and getting a real job.

What was your first movie project?

I was working in web for a while and I was really into video games at the time. This video game magazine had a film festival contest to “show us how hardcore of a gamer you are”. I set up a camera of me playing Quake III and ended up winning the contest and from there, I thought I could do film on the side as I had a regular day job.

I had seen Operation: Red Retrieval when it came out, and I couldn’t believe it. A ton of fan films come out, for the Batman family…those are all great but man, I love G.I. Joe.  How did you end up making this awesome G.I. Joe movie?

My work was going well and I wanted to come back and make another film. People will flock to see fan films, it’s almost a technique to get exposure if it is done right. The Batman family was all taken, and what I really would love to do was G.I. Joe. I haven’t seen a Hollywood or live action version that fits my memories of the comic. 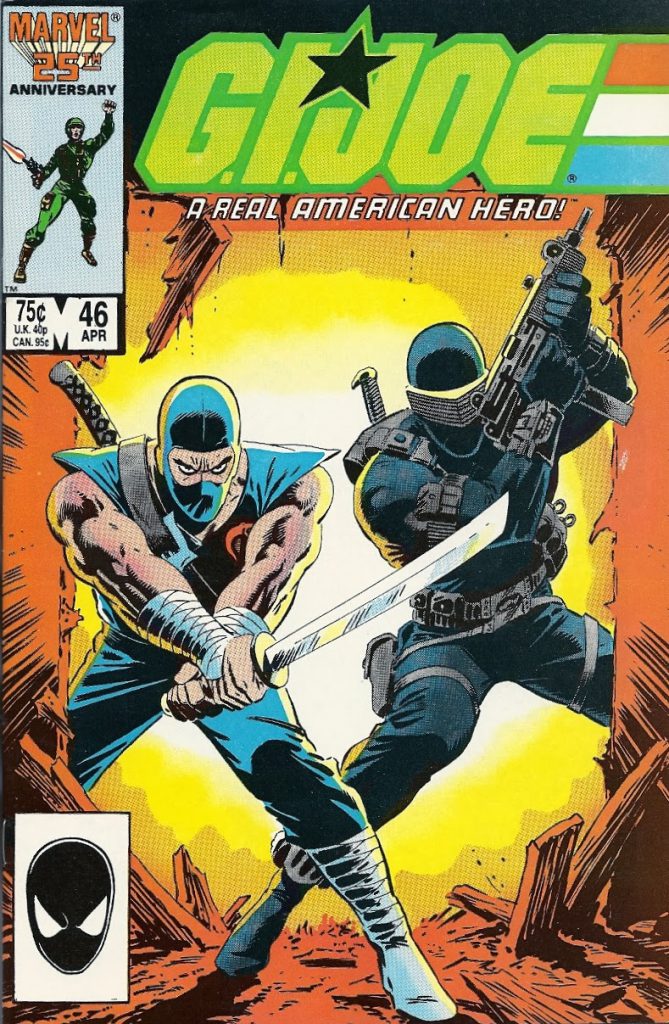 I had never seen the Snake-Eyes grill the way I had always envisioned it from your favorite, G.I. Joe #46!

It started as a daydream during my commute, a ‘what would it be like if some story where all signs pointed it to being Zartan’s cloaking camouflage? …but then suddenly it turns to completely not that’!

That’s where my childhood memories of playing with all of my action figures G.I. Joe, Thundercats, He-Man…all together.

The ultimate, epic Mash-Up of Good VS. EVIL!

It came down to what characters can I put in there.

Obviously Zartan, Snake-Eyes, and I put out what most indie films do. I put out a casting call for the fan film. I needed volunteers, I had fans coming out of the woodwork.

The acting, the casting, that was all really on point. It seemed like everyone was way into it, too.

The guy who played Zartan, Mack, he knew more about Zartan than I did. He did the research.
“Did you want me to do a backwater swamp Zartan, or do you want me to bring in the twisted Australian accent…”

He had been rehearsing by walking the streets of Manhattan, talking to himself, like he thought Zartan would when he was angry. That was amazing to get him.

A really cool casting bit was Snake-Eyes was played by a series of stunt guys, all in the same team. A lot of the very fast action sequences was done by a tall slender black bald guy, who us a martial arts expert and owns a school in Philadelphia. He was fully trained in a lot of the moves he was doing and worked with the choreographer to make more it cinematic with his poses.

And all of the actors were G.I. Joe fans. During lunch break there was rubber AK-47s and making gun noises.

Care to tell us about the digital production aspect of the film with the special effects?

I’m a self-taught visual effects artist as well. Most of the digital effects were done by me. The muzzle flashes, the shell casing ejections to all the scenes with fire were digitally composited to make it a little more dangerous.

I would use an off-camera light, to make the light reflection on someone’s face and put in a digital flame in the exact perfect spot.

The other thing that helped with the action was putting in tons of debris, flying all over the place and artificial camera shake.

You’re working with Larry Hama on Ghost Source Zero for a Kickstarter Project. Tell me how you met Larry and how things are going.

The G.I. Joe fan film was doing really well, I had random Joe fans suggesting I show the film to Larry Hama.

To those that don’t know, Larry Hama is the guy that wrote all the G.I. Joe comics and the file cards on the back of the action figures.

I found him on Facebook, and wrote him this impassioned letter about what G.I. Joe means to me, and tried to strike the tone of not being a crazy lunatic, but an enthusiastic loyal fan.

I sent him the DVD and called him a week later, he thought it was great, and shared it on his wall with his friends.

It turns out he lives close by. We agreed to have lunch, and we talked action movies and comic books, and were really hitting it off. He asked how I made the film, how I made it look as good as it is and the budget. 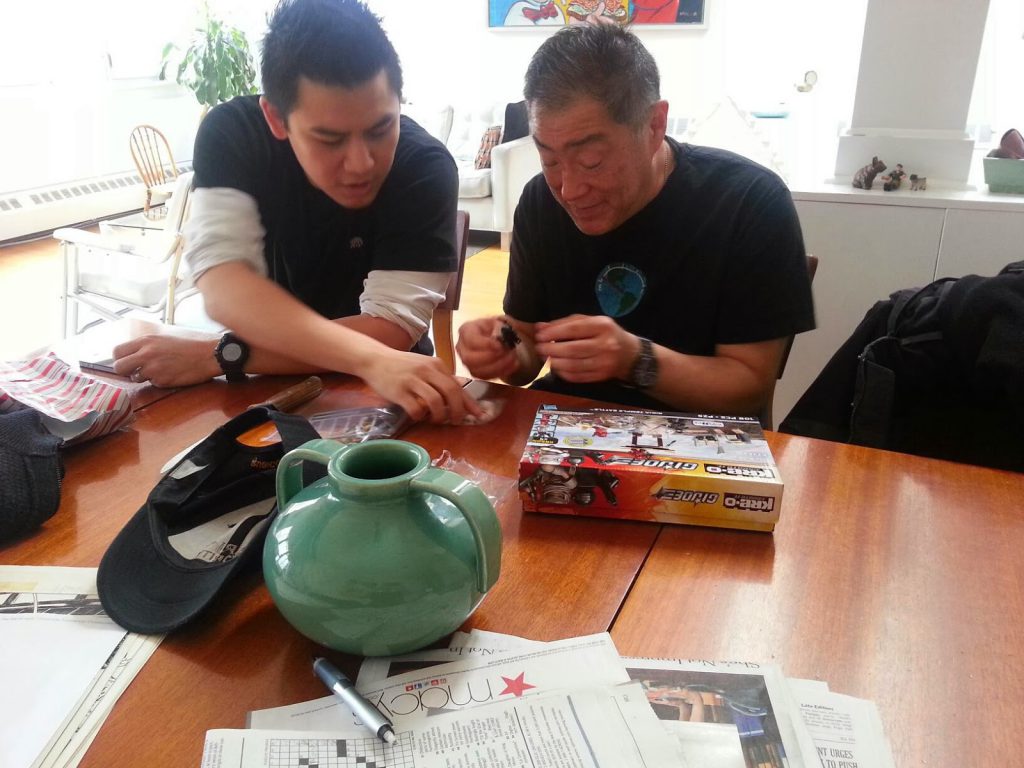 He used to work in Hollywood as a script doctor, so he knew how big and slow moving this Hollywood engine can be. I think he liked the passion and innovation behind it.

“What would it be like if we worked on a film together?”

He and his Marvel writer friends are all about creator owned projects. Ghost Source Zero was my dream project, I didn’t think I’d be able to afford it. When Larry read it, he was away at a Con, and emailed me from his hotel room. He said it was brilliant and wanted to do something with it!

That kicked off the whole thing. We’ve been rewriting it and readapting this feature length into an episodic format into these comic books that he writes.

Along comes the Kickstarter. After talking to investors, we decided to go straight to the fans with Kickstarter, that way we don’t have to make as many creative compromises.

It has worked out well, everything has aligned that way.

How is the Kickstarter going? Seems like the funding is getting there.

We do need the extra boost in the days to come.

A really exciting thing happened yesterday, a big G.I. Joe fan reached out to us, an angel investor who is going to match some donations up to a certain amount this weekend.

What are some of the rewards?

The biggest thing we wanted to make sure was that the fan was getting something at the lowest tier. The lowest tier is $10 and people get a copy of the film.

We entice the higher rewards with stuff the fans would also like, an unopened G.I. Joe action figure signed by Larry. Associate Producer credits on IMDB and the film, lunch with Larry.

We’ve partnered with a prop fabrication company, specialists, that are making futuristic weapons and costumes. 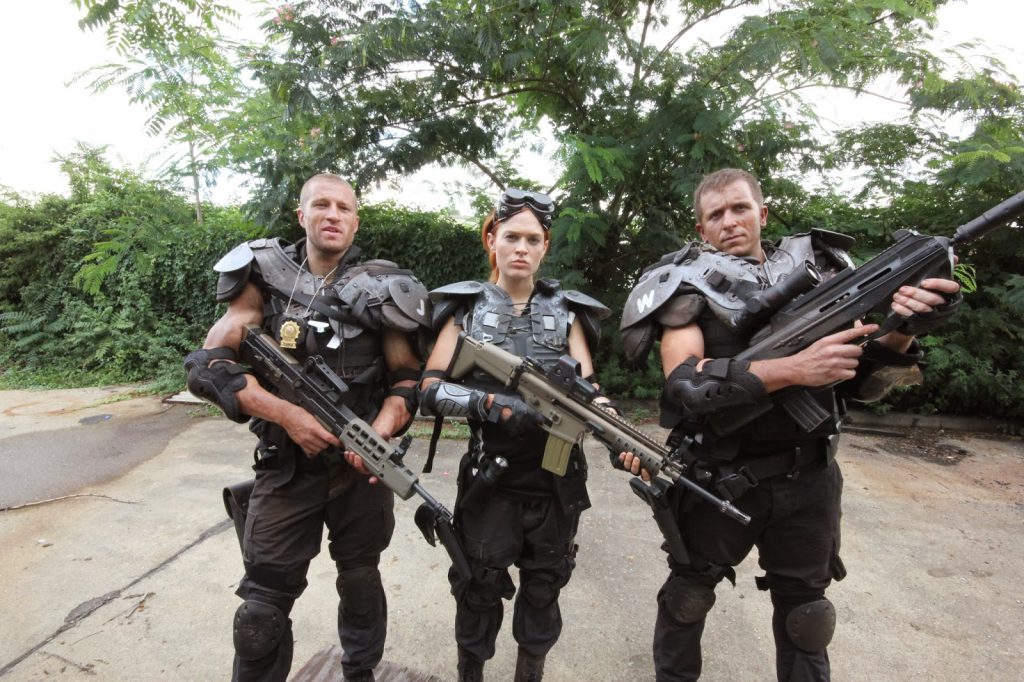 Rewards include touring the facilities, trying on the costumes, even taking home one of the costumes with you. A lot of cool stuff for the collector and scifi junkie.

The story is set in the near future?

I pitch it as a whodunit story wrapped in a cyberpunk action movie. It takes place in the future where androids and hackers are some of the most dangerous villains out there. Our main characters are cybercrime police men.

They are trying to solve a mystery about these hi-tech assassinations that are taking place. Through the investigation they stumble upon this fantastic conspiracy that will change the world as we know it. 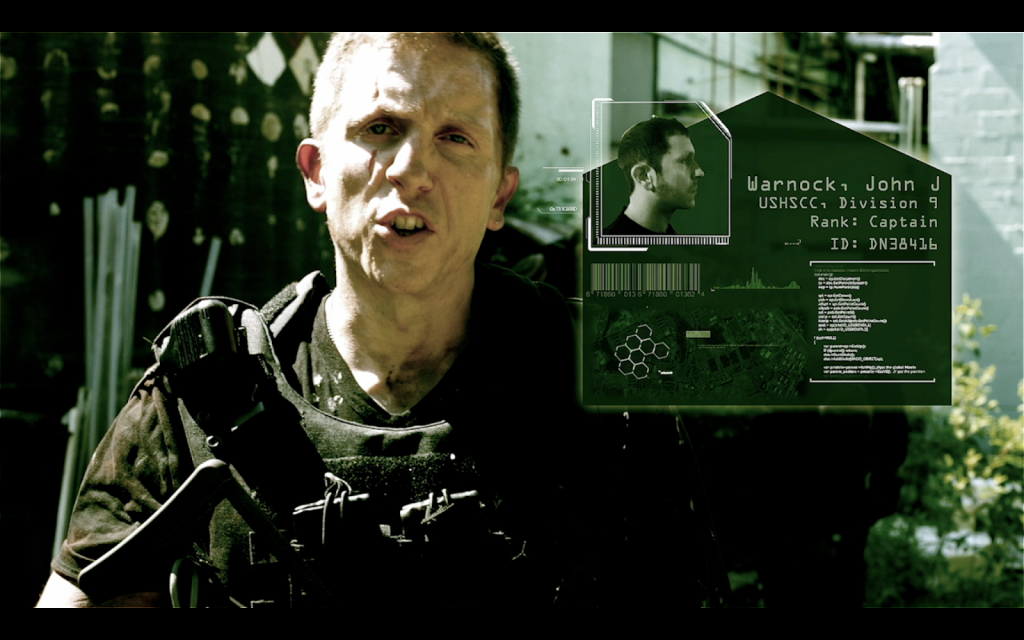 It is a cool blend of futuristic world of hi-tech weapons and a lot of action. At the core is social political questions that make you thing about things.

Some of the best sci-fi out there makes you think about the current state of the world and where we are just about to reach.

When does an androids stop becoming a thing? When do you recognize and acknowledge the android’s rights?

There is a great line in the film that sums up perfectly.  “If it doesn’t have any rights—then we’re not exploiting it”. 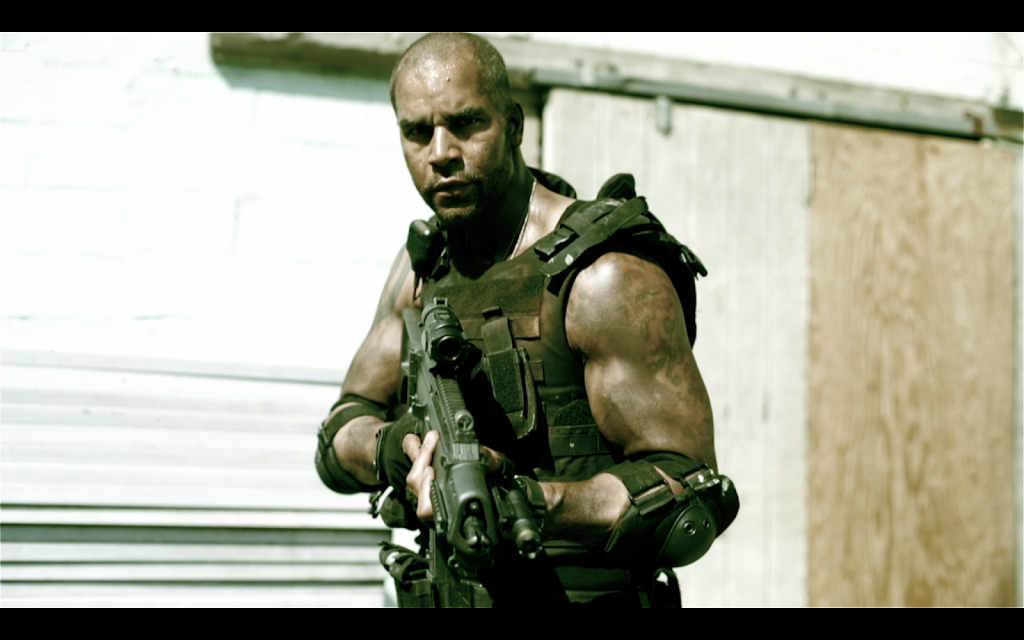 Imagine a human looking thing that doesn’t have any rights…there are so many questions there.

These are the things that are hardcore Joe fans will appreciate. There was always a lot of social commentary, there was a lot going on beyond the ninjas and cool military guys punching each other!

That’s to Larry’s credit, he would try to blend those themes and concepts into the comics even to 12 year olds that were reading it — like us at the time. 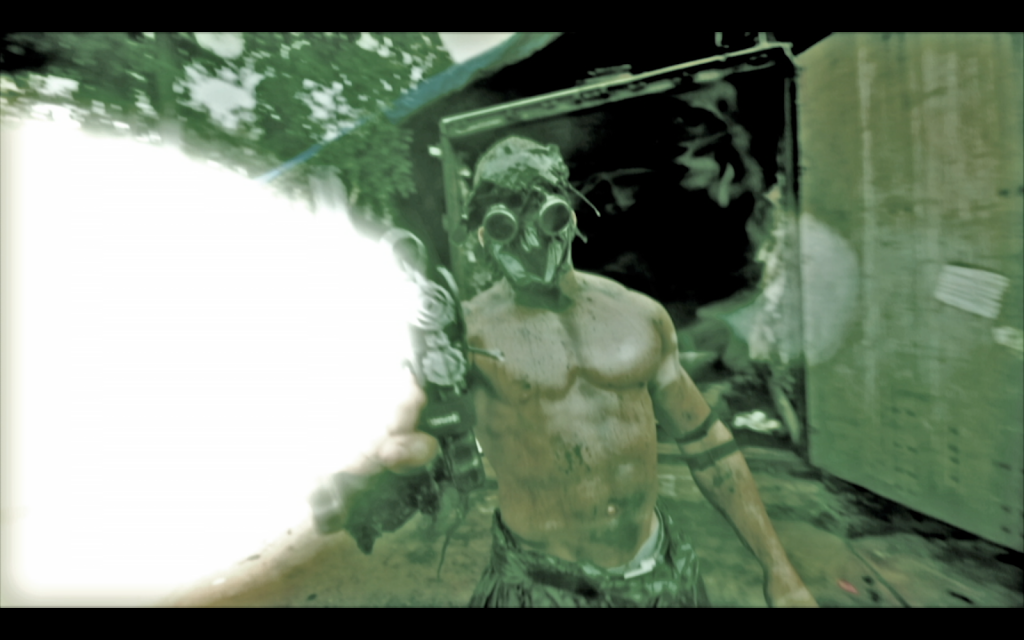 It is totally up a Joe fan’s alley. The core group of this hi-tech military crew, they feel familiar, The dynamic is there, the camaraderie, the seriousness and the humor is there. Good stuff for fans.

Who is your favorite G.I. Joe?

My followup question is Snake-Eyes or Storm Shadow…

Gotta be Snake-Eyes! The whole story behind Snake-Eyes is if you take away a man’s family, his voice, and his face, he won’t necessarily be broken man. Through his actions he will find a new family, a new voice and a new face.

To me, that is G.I. Joe wrapped up into a single character story! I love it. 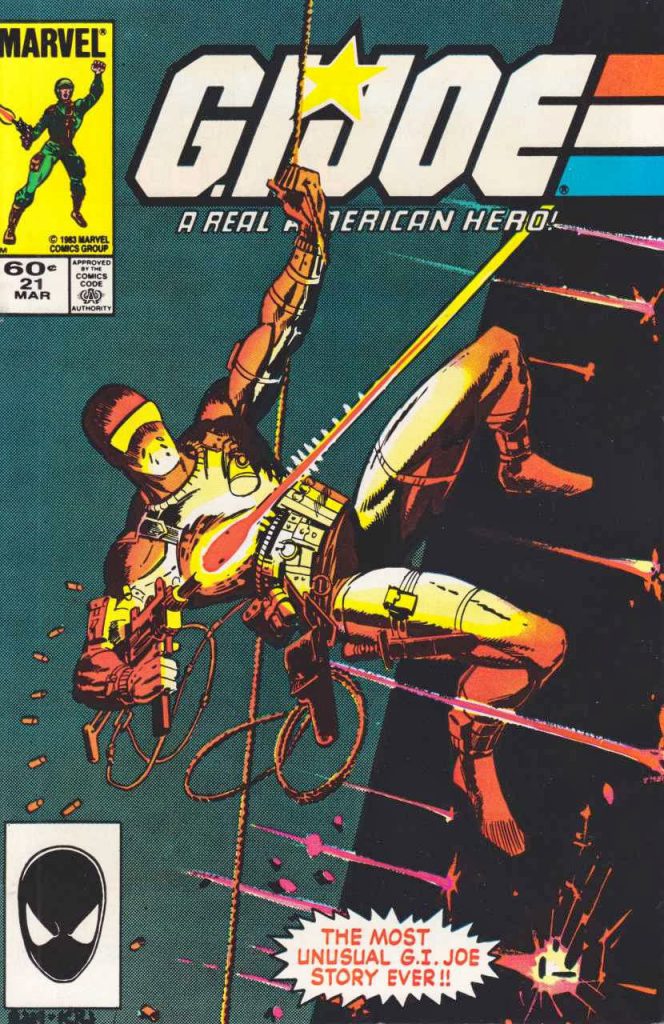 G.I. Joe: A Real American Hero: Silent Interlude #21 was an issue that really resonated with me because I remember being ADD type kid that couldn’t read the words of a comic book.  To have this issue with nothing to read but you could get every nuance and detail of the story.

Larry drew that as well as wrote it!

Yeah! and his famous story there was that they were behind schedule and to save time, there wasn’t time for a letterer. It’s brilliant!

Something I think about Silent Interlude is that it is a meditation, it is all in your own head.

It almost feels like a Snake-Eyes memory while meditating.

Thanks so much, Mark! Anything else?

Three days after our Kickstarter launched, Larry took a really bad fall in his apartment.

He is fine, he had surgery, and has been in physical therapy rehab lab for this entire campaign. I’ve been visiting him, and talking to him on the phone for a couple minutes at a time. He’s doing well and we want to wish him well whenever we have opportunities like this!