Before you get excited, it’s not uncut. 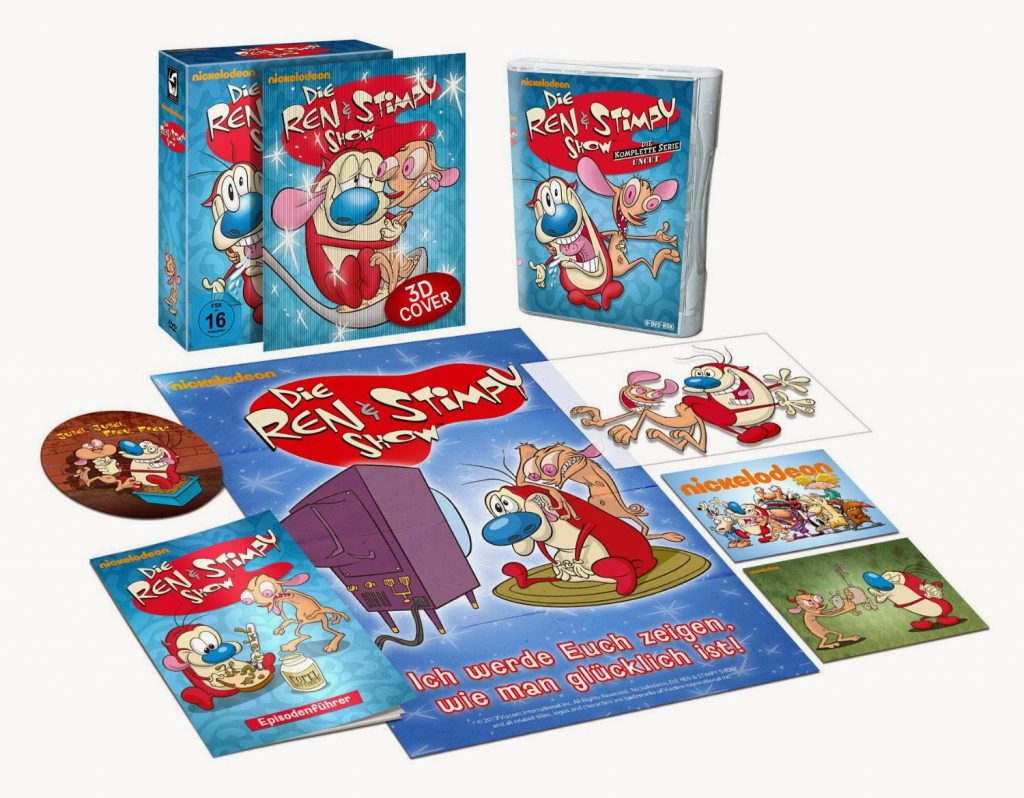 This set was clearly trying to repair the damage done by the censored sets released in America almost a decade ago. The majority of the scenes excised have been reinstated here.

Sadly, although this set is bilingual (with the original English tracks and the old audio commentaries), the scenes that have been restored are only available in the German dub. So while we can once again see the complete pathos of Son of Stimpy and Ren’s hijinks in Jiminy Lummox, the glass is only half-filled as you don’t get to hear the cartoons as they originally aired.

Here’s a guide you should read before importing this set… This info will be included in the episode guide of the revised edition of Sick Little Monkeys.

REN’S TOOTHACHE
RESTORED. Stimpy filling his jar of spit after brushing his teeth has been reinstated.

BIG BABY SCAM
STILL CENSORED, BUT NOT QUITE… The scene of Ren getting his skin cut off by Mr. Pipe’s stubble was restored, but Old Man Hunger’s whistling in the family bath is cut. BUT—online reviews state their copies have the whistling reinstated! Definitely a shabby treatment of Vincent Waller’s masterpiece. 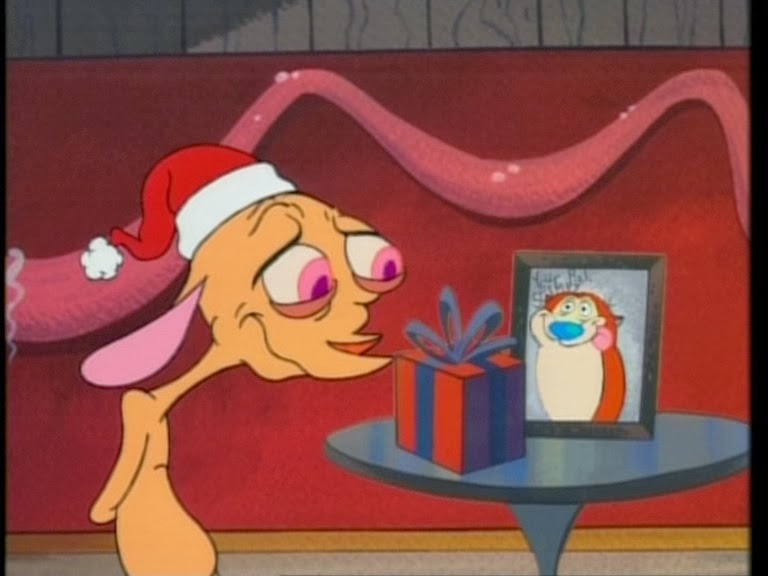 RESTORED. All of the scenes edited from John K.’s fart-warming masterpiece (an extended montage of Stimpy awake in bed, Ren placing the present next to Stimpy’s picture) have been reinstated.

THE GREAT OUTDOORS
STILL CENSORED. A shot of Ren lighting a match has been cut from most copies and is still cut here. Thanks to Allen Jankowics for pointing this one out to me, as I missed it.

THE CAT THAT LAID THE GOLDEN HAIRBALL 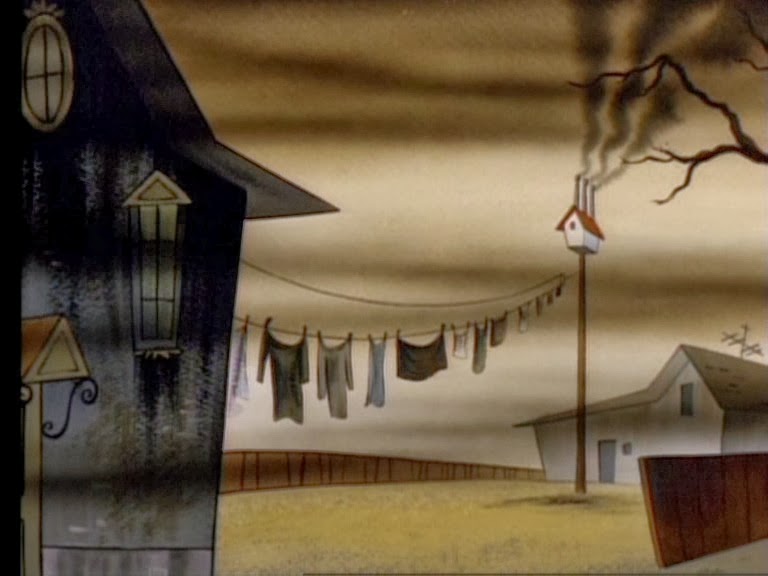 RESTORED. The assembly-line montage of the hairball plant has been restored.

THE ROYAL CANADIAN KILTED YAKSMEN
STILL CENSORED. The world “hell” is still farted out from the Yaksmen’s Anthem… But that might not count, because it never made it to most broadcasts. 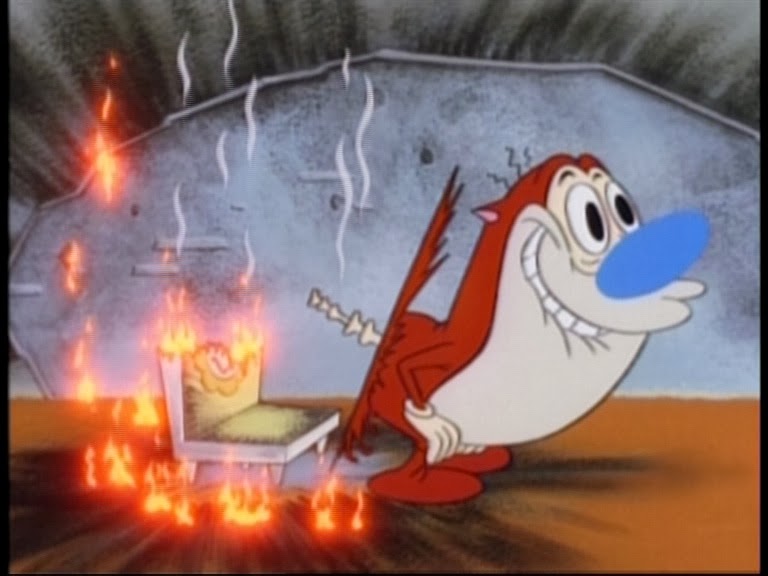 RESTORED. The scenes with Ren blowing off Stimpy’s ass and filling his bath with crabs have been restored. 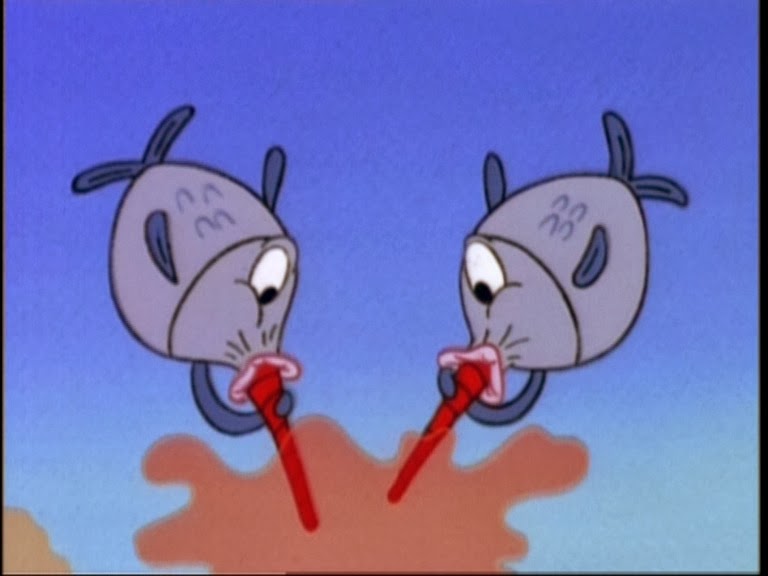 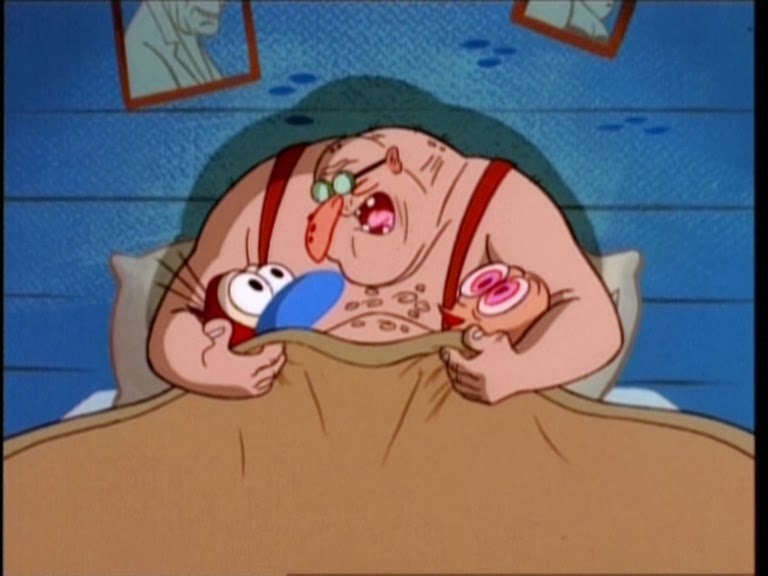 RESTORED. Ren being eaten by a buzzard, Mr. Pipe in the shower with Ren, and Wilbur Cobb’s monologue have been restored. 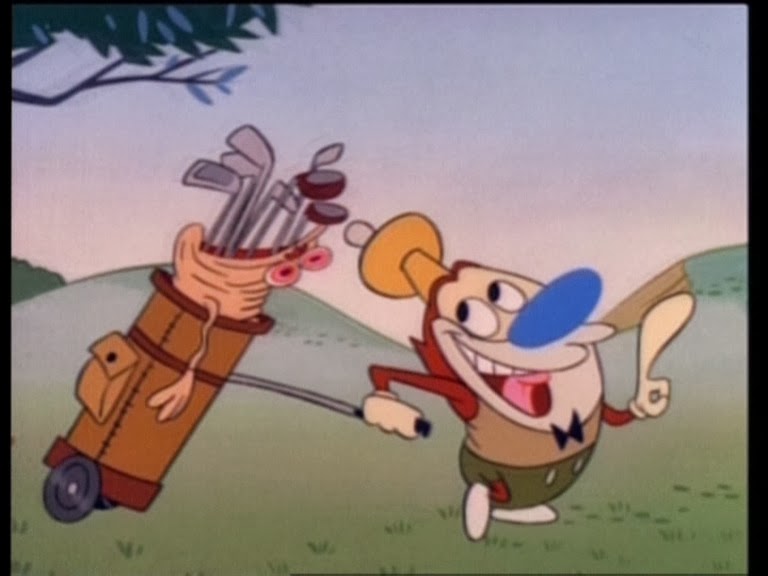 RESTORED. Ren as Stimpy’s golf caddy after the former’s encounter with Haggis MacHaggis has been reinstated.

EAT MY COOKIES
RESTORED. The “flying badge” has been reinstated. 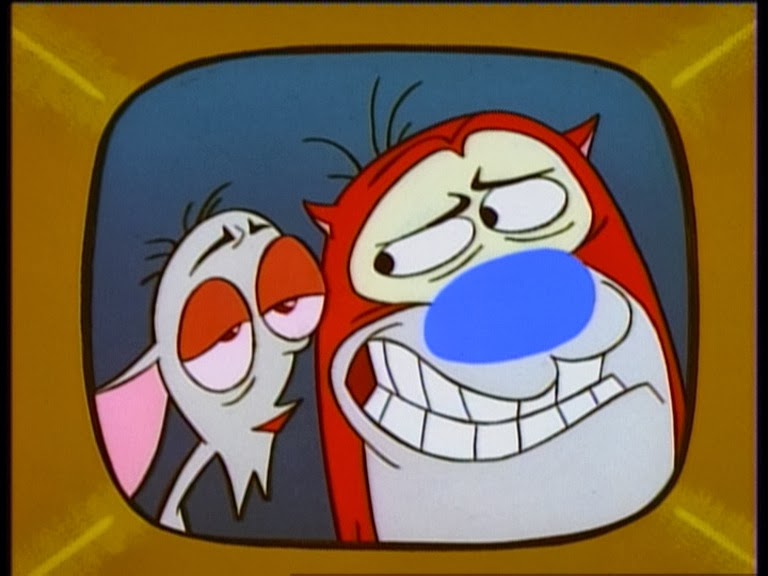 RESTORED. Stimpy’s dialogue with Ren inside the TV set has been restored—pity you don’t get to actually hear it.

HOUSE OF NEXT TUESDAY
RESTORED. The whale vomiting “seafood” has been restored.

FARM HANDS
RESTORED. The aftermath of Ren and Stimpy getting their teeth knocked out has been reinstated.

MAGICAL GOLDEN SINGING CHEESES
RESTORED. Reinstated is the battle of stupidity between Stimpy and the Village Idiot. 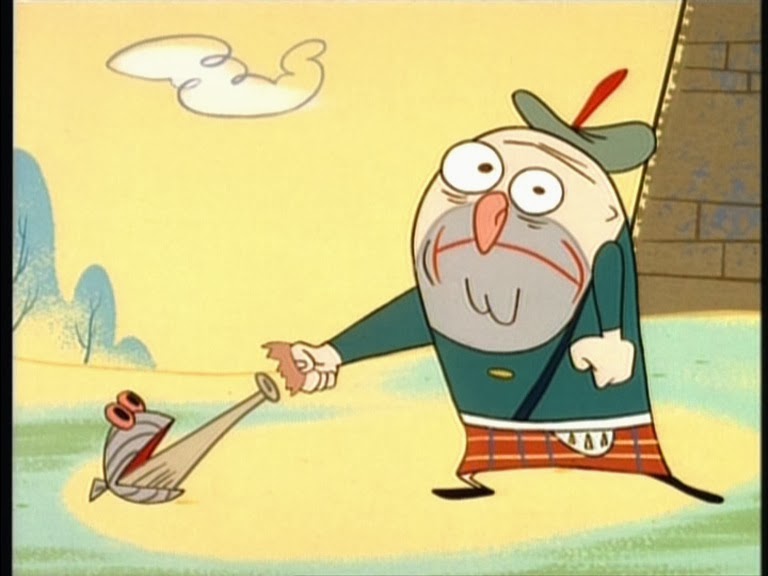 I LOVE CHICKEN
RESTORED. Stimpy’s wife’s dowry (giblets) will once again gross you out.

POWDERED TOAST MAN VS. WAFFLE WOMAN
RESTORED. Waffle Woman’s “If you’ve got the guts!” comments is back. 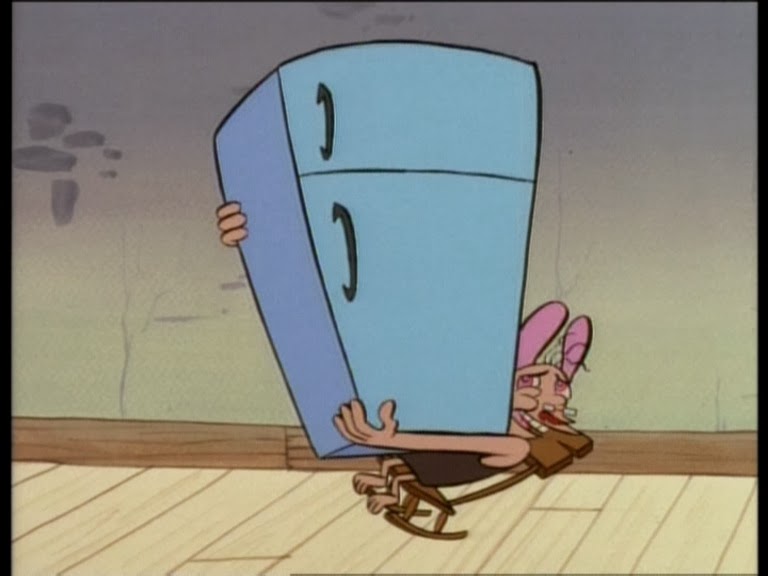 RESTORED. Opening pan of village, Eggyölkeo driving the car with his kidnappers, and Ren rocking the fridge with Eggyölkeo to sleep have been reinstated. 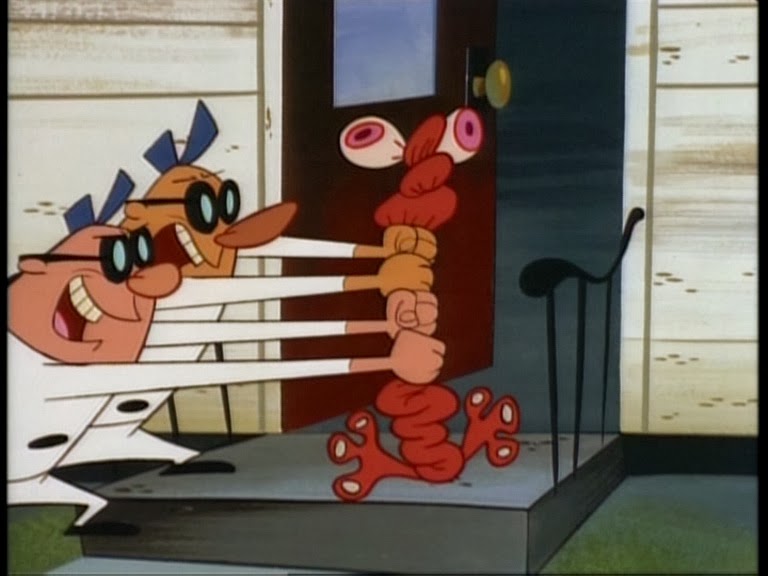 RESTORED. This intriguing misfire has been restored to its original version, with Ren being hauled off to the asylum and getting a visit from Stimpy and their lovechild. 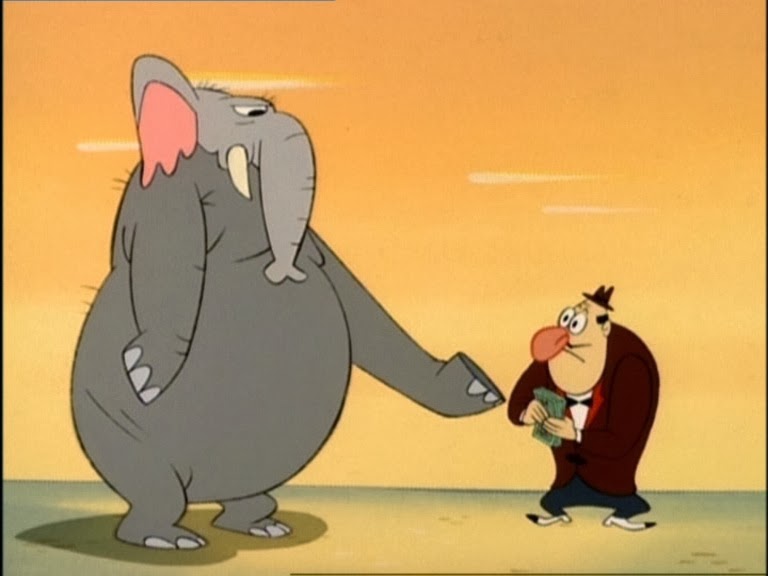 RESTORED. Ewalt raiding his grandpa’s retirement fund and the elephant collecting his commission from the Salesman are reinstated.

BELLHOPS
RESTORED. Ren and Stimpy “filthying” up the rooms has been restored.

I WAS A TEENAGE STIMPY
STILL CENSORED. Another one that might not count, but a scene of Stimpy’s “morning wood” was excised before broadcast and is still not here. I always knew about this scene because Billy West told me about it (he owns a cel from it, and had Bill Wray paint a fresh background for it), but neglected to mention it in my book.

WHO’S STUPID NOW?
RESTORED. Ren’s opening monologue and some dialogue at the conveyor belt have been reinstated.

REVEREND JACK CHEESE
STILL CENSORED. Another one that might not count… See below for the complete ceremony.

SAMMY AND ME
RESTORED. Some dialogue between Ren and Stimpy in bed has been reinstated.

THE LAST TEMPTATION
RESTORED. A poolside scene has been restored.

CONCLUSION:
Buyer beware. It pains me because this was clearly a noble effort. I certainly have enough experience stitching together complete films with material from varying sources to recognize craftsmen at work.

If you don’t mind the German dubs (take note that the opening titles to each cartoon are replaced with a German title card too), it might be worth it.

If you plan to make your own proper DVD set, then it’s definitely worth it.

Otherwise, it’s not worth the 96 EUR plus shipping price tag.