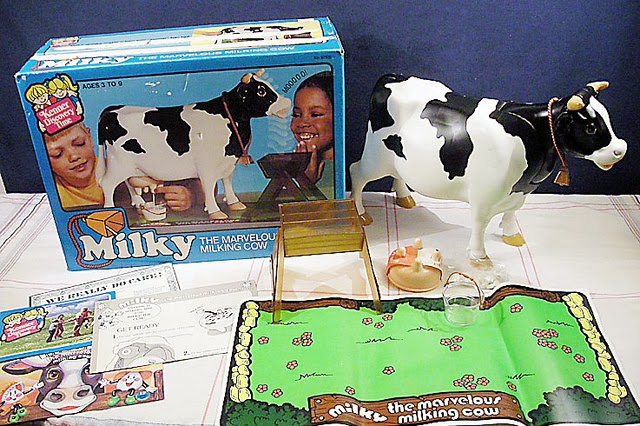 Hey, you know what would be a great gift for a kid? A toy cow that you can milk.

That’s right, just go right ahead suburban kid, grab those soft plastic teats and tug away. And you know what is even cooler? The stuff that comes out of those teats is called “pretend milk”, a pale white substance made inside the bacteria-infested toy by combining water (which your stupid asshole toy can drink when you CRANK ITS TAIL) and a mysterious white pellet that may or may not be strychnine.

Not that you shouldn’t drink the “milk” (I mean it wasn’t totally toxic, sure there are probably a few cases of cancer that evolved 20 + years later but that can’t be linked to Milky the Marvelous Milking Cow or anything) it’s just that no one ever saw the kids in the commercial put the glass of teat juice to their own lips and down it.

So yeah, some of us drank it…and now I have spinal arthritis and need my hips replaced.

Watch the commercial after the break and be glad that some of you are too young to know what it was like to open a gift that contained a plastic cow that would slowly suck the life from you via poisoning.