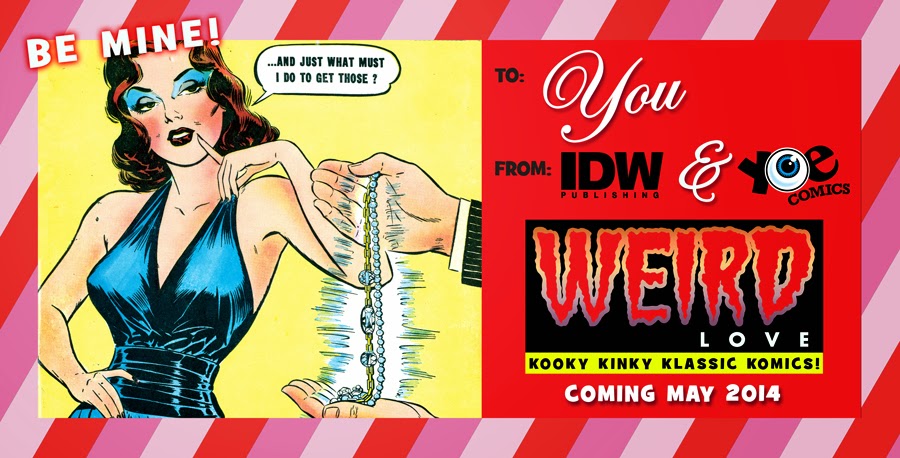 Happy Valentine’s Day! Love is in the air and it smells WEIRD! It must be because IDW Publishing and Yoe! Books have shacked up again to collect the most sexy, bizarre, sick, twisted, politically incorrect, kinky “romance” comics of the 1950s and beyond in WEIRD Love.

“In the 1950s, in some so-called ‘romance’ comics, there were stories so sick, perverse, strange, kinky, twisted, and politically incorrect that no good and moral person in their right mind would ever think to reprint them,” says Craig Yoe, “So, I am very, very excited to be reprinting these gems!”

The fruit of our weird love will release into the world starting this May with luridly illustrated pulp comic fiction like “Love of a Lunatic,” “I Fell for a Commie,” “The Taming of the Brute,” the wacko “You Also Snore, Darling,” and more! These are sure to elicit a fair amount of “OMG-I-Can’t -Believe-This!” moments, we promise.

“In the 1950s, in some so-called ‘romance’ comics, there were stories so sick, perverse, strange, kinky, twisted, and politically incorrect that no good and moral person in their right mind would ever think to reprint them, says Craig Yoe, “So, I am very, very excited to be reprinting these gems!”

This full-color collector’s edition which begins the WEIRD Love series “ends” with a pre-code comics ode to the female derriere(!). No wonder the censors wanted this stuff banned! Sure to be a must-have big-buzz comic—and it’s bargain-priced! Who says love isn’t cheap?

And if that news isn’t enticing enough, no less than Craig Yoe himself shared some details about this torrid new series! 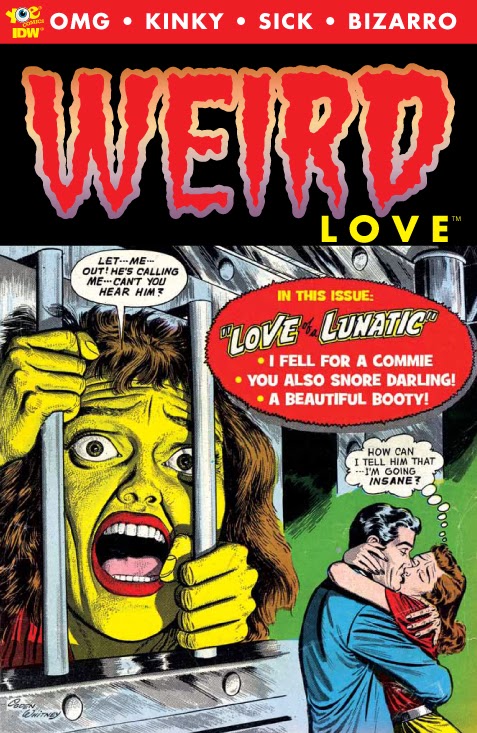 FOG!: Congratulations on the announcement of WEIRD Love. You’ve previously tackled sex in comics with your book, Secret Identity: The Fetish Art of Superman’s Co-Creator Joe Shuster, and you curated the comics exhibit at New York City’s Museum of Sex.

Craig Yoe: Someone recently told me that you can have love and sex at the same TIME! I had no idea!

What are the parameters when selecting stories? Is it tone? Time period? Overall strangeness? Or a combination?

To be included in WEIRD Love the comics have to be bizzaro, wacky, kinky, depraved and politically incorrect enough that my eyes have to bulge out and my jaw has to drop while I shout “Oh, my God! This is SO WRONG!!!” If the stories have art that is inappropriately over-sexualized that’s always a plus.

WEIRD Love joins Haunted Horror and Classic Popeye as the regular comic titles you curate. What other comic titles or themes would you like to find new appreciation with modern audiences?

I could tell you our future plans if you’d like, but I would have to kill you. Let me know.

Do you have a favorite story, either in the first or in a future issue of WEIRD Love?

Stefan, my favorite stories that I have selected for WEIRD Love are the ones that I felt a deep personal connection to. “I Fell for a Commie”, “Too Fat to Frug” and “I was an Escort Girl” read like my life!

What other Yoe! Books can readers look forward to in 2014?

We just sent to the printer an amazing book, Alice in Comicland, with Golden age stories riffing on Alice in Wonderland. Horror comics to funny stuff and superhero adventure. The book sports a who’s who of cartoonists including Charles Schulz, Alex Toth, Dave Berg, Harvey Kurtzman, Jack Davis, George Carlson, Walt Kelly and many more. It has an fascinating intro by Mark Burstein, the President of the Lewis Carroll Society of America. It’s a lot of fun!

And we’re working on many more terrific books in The Chilling Archives of Horror Comics series.

I could tell you more if you’d like, but I’d have to kill you. Let me know. 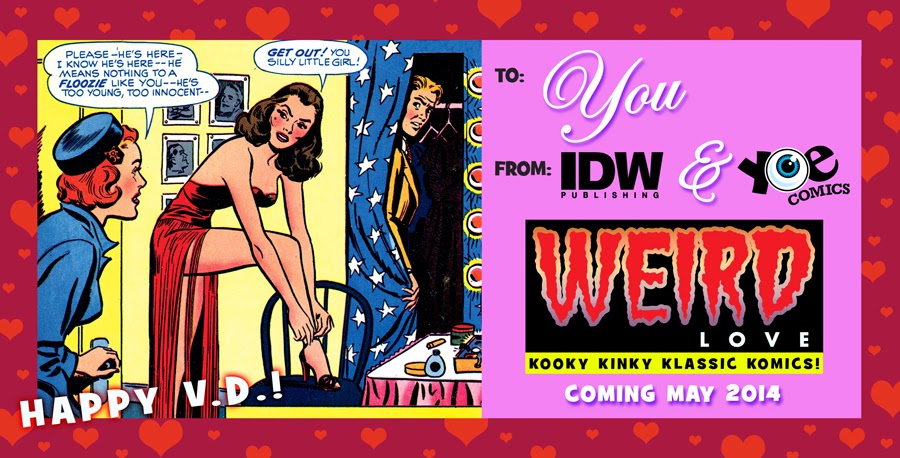